Amid rumors suggesting Apple is planning on introducing at least one iPhone model with a flexible OLED display in 2017, Bloomberg has taken a closer look at Japanese company Canon Tokki, the corporation responsible for making the machines that will likely be used to create OLED displays for the iPhone.

Canon Tokki is said to produce nearly all of the machines that make OLED Displays. Each ELVESS OLED machine is actually a vacuum production system that's 328 feet in length and is used to deposit red, blue, and green pixels on a glass surface using evaporating organic materials.

Canon Tokki has developed key technologies for the production process that have significantly reduced the margin of error, leading to much higher yields that other companies can't compete with. 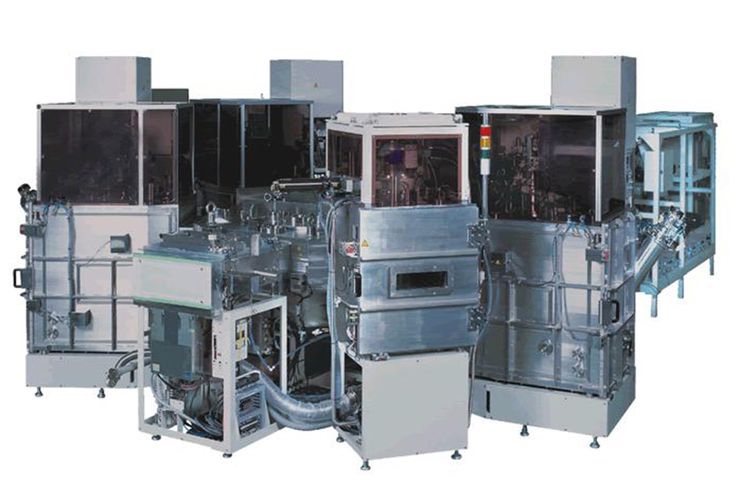 According to Bloomberg, Canon Tokki reportedly makes fewer than 10 machines per year and has a two-year backlog due to high-demand, but it is not clear if this will have an impact on Apple. Apple is rumored to be using OLED displays produced by Samsung, and much of the equipment may already be on hand.

Samsung's own line of smartphones have used OLED displays for several years, but Blooomberg does warn that Samsung may not be able to make enough OLED displays to meet Apple's demand due to low yield rates.

The potential production bottleneck is raising questions over Apple's ability to feature OLED displays in next year's iPhones, and whether the Cupertino, California-based company will be able to line up additional suppliers. The current wait for a machine, which can cost more than 10 billion yen ($85 million) each, is about two years.

"We are doing all we can to increase output and make that wait shorter," said Chief Executive Officer Teruhisa Tsugami, adding that demand from display makers, including Samsung Display Co., LG Display Co. and Sharp Corp., will remain strong for the next three years.
Click to expand...

OLED displays offer superior contrast and better power efficiency for improved battery life compared to traditional LCDs. OLED displays can also be made from flexible plastic and can be made much thinner.

According to rumors, Apple will release at least one iPhone model that uses an OLED display in 2017, but rumors have disagreed on what the display will look like. While some rumors suggest the iPhone 8 will use a curved OLED display that wraps around the edges of the device (similar to the Galaxy S7 Edge), others point towards less dramatic curves, suggesting a flat OLED display that eliminates all bezels for an edge-to-edge design.

It wouldn't be an iPhone release unless there was a shortage on some component!
Reactions: lewismayell, LIVEFRMNYC, Cameroncafe10a and 48 others

Lol getting us ready for another iPhone 6 event
Reactions: LIVEFRMNYC, Kameha, Cameroncafe10a and 19 others
A

Not so much if it will be the premium edition of 3 phones. They should just invest in microLED.
Reactions: t1meless1nf1n1t and Avieshek

big surprise, theres an excuse for every single shortage of every single product
Reactions: Kameha, Cameroncafe10a, Orlandoech and 12 others

Can't wait to get my preorder in at 12:01am and get a shipping estimate for 2 months later.
Reactions: lewismayell, sunwukong, Cameroncafe10a and 21 others

Par for the course. Bet they just decided on OLED displays months rather than years ago.. hence the shortages. /s
Reactions: noekozz, Moorepheus and Avieshek

I love how the majority of MR posters will blame Apple for this, i.e. "There's an excuse for every single shortage..." Sucks to be Apple these days, well, except for the millions of products they continue to sell.
Reactions: TiquanS, nighthawk67, coolfactor and 9 others

I'm surprised those machines are so uncommon still. I thought everyone was jumping on the OLED train by now.

Even some laptops have it these days. And rightly so, it's great tech. I love it on my Samsung Tab S (Even though it's so slow that I only use it to watch movies). I have an S7 as well but its screen was flawed (strange brightness unevenness in vertical bands) so it doesn't get much use. Samsung's QC is really bad and so is their support, unfortunately.

I wish Apple would come down in price a bit so I could go back to the brand privately. But they've just priced themselves out of my budget. Still using a 5S as my main work phone though
Reactions: Moorepheus, PBRsg and V.K.

Are we sure that those things are OLED making machines and not the prototype models for the 2014, 2015 and 2016 Mac Pros? It would explain a lot...

Seriously I am surprised it's taking so long to make OLED iPhones, but it would be nice to think Apple have waited this long because they have something particularly special planned (no, I am talking about the iPhone now, not the Mac Pro, really).
Reactions: 0958400, Sasparilla and GrumpyMom

$85 million a piece! Hot damn. For anyone suggesting Apple get into manufacturing, this is one of the reasons I think this idea is dumb. Manufacturing is cost intensive and ongoing considering the need to re-tool when introducing new tech. That's not including R&D and other stuff. It would eat profits like a lumberjack convention at a buffet.

$85 million? A piece? GTELHOH (get the ever loving hell outta here)
Reactions: yanksfan114, coolfactor and HArzeh

GekkePrutser said:
I'm surprised those machines are so uncommon still. I thought everyone was jumping on the OLED train by now.

Even some laptops have it these days.
Click to expand...

If you read the article you would see where it says others have it but they have low-yield machines and these are supposed to have higher yields. I think it's in the second sentence of the third paragraph.
Reactions: philosoraptor1
B

The words such as "likely", "according to" etc. go past a rumour and step into the area of wild speculation. I've heard a rumour from my wife's friends, daughter's uncle 5 times removed that the next phone is likely to be a projection from a chip built into our cornea that will project a screen 6 feet from our face and will replace 60" 4K tvs.
Reactions: Moorepheus

WRChris said:
If you read the article you would see where it says others have it but they have low-yield machines and these are supposed to have higher yields. I think it's in the second sentence
Click to expand...

Yeah but it also says "Canon Tokki is said to produce nearly all of the machines that make OLED Displays."

GekkePrutser said:
Yeah but it also says "Canon Tokki is said to produce nearly all of the machines that make OLED Displays."
Click to expand...

Taking bets - is the 2017 iphone an iPhone 7S or an iPhone 8?
Reactions: nighthawk67, Moorepheus and Gilligan's last elephant

I foresee my screen with tinge of yellow.
Reactions: Glassed Silver, iAmAsar, BarredOwl and 1 other person

How many times is macrumors going to recycle the "shortage of OLED panels rumour? I know this is a variation be I think we get it by now?

ILuvEggplant said:
I foresee my screen with tinge of yellow.
Click to expand...

Confirmed. For the replacement, I hope I get the (good) Samsung one.
S

Wonder how much of a premium Apple is going to charge for the "Pro" OLED edge to edge phone? Guesses?

I'm guessing $200 over the Plus price.
Reactions: Moorepheus
L

You can't be innovative enough if you rely on outsourced suppliers. Tesla GigaFactory is created to continuous reconstruction.

Get your wallets ready for iPhone 7S in Pearl White. It's a brand new "design" (color). If this truly wireless charging tech happens though, it'll be a pleasant (satisfying) surprise like the iPhone 5S with Touch ID.
Reactions: Retired Cat and BarredOwl
You must log in or register to reply here.
Share:
Facebook Twitter Reddit Email Share Link
Register on MacRumors! This sidebar will go away, and you'll see fewer ads.
Sign Up
Top Bottom