Apple is working on a new iPad with a foldable display to be launched as soon as 2020, according to a sketchy new rumor by IHS Markit analyst Jeff Lin, citing supply chain sources (via Economic Daily News). Many reports have suggested Apple could be interested in foldable devices, but this is one of the first times we've heard of a potential foldable iPad.

According to Lin, the 2020 iPad's screen size will be nearly equal to the current MacBook line, suggesting another iPad in the 12-inch range, similar to the current 12.9-inch iPad Pro. Lin goes on to state that this foldable iPad will also be the first with 5G, creating a tablet with many "business-friendly" features. 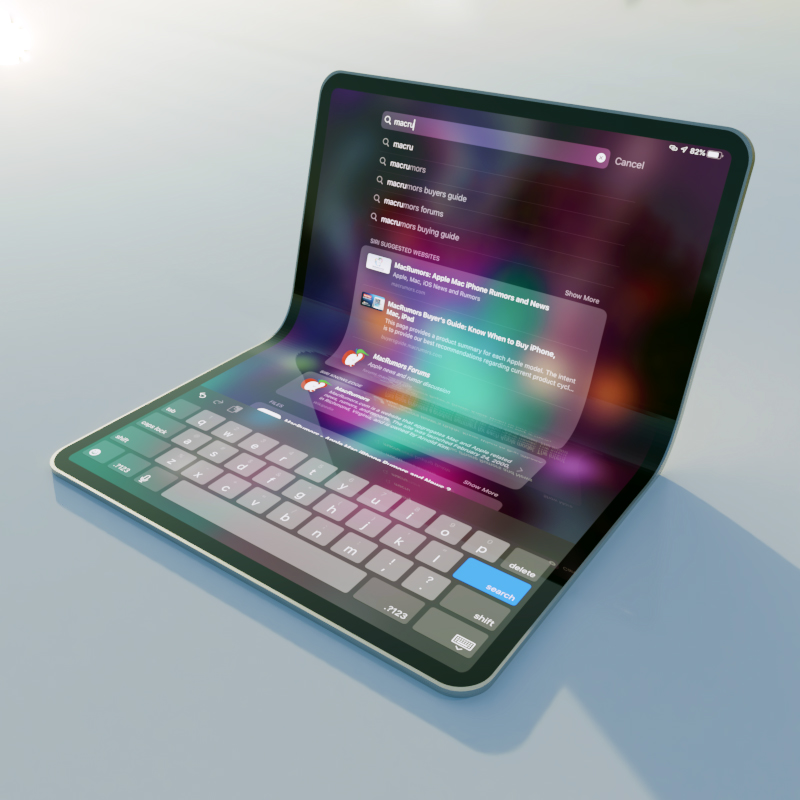 As of now, rumors suggest that next-generation iPad Pro models will be released in early 2020, potentially with a time-of-flight rear-facing camera system. This would allow for 3D models to be captured using the tablet and edited with Apple Pencil. Although Apple has been linked to foldable display rumors in the past, the launch of an iPad with a foldable screen as soon as next year appears unlikely.

Reports suggest that Apple's 2020 iPhones will support 5G networks, and it's likely the iPhone would get 5G features before the iPad. Prior to Apple's support of 5G in its hardware, all of the major cellular companies have begun launching 5G test networks in many cities around the country.

In regards to the foldable display, we've seen recently that Apple will have to contend with many potential issues if it does release a device with a screen that folds, if Samsung's Galaxy Fold is any indication. When that device became available to reviewers in April, many serious issues came to light, all sourced from the smartphone's folding feature.

Samsung eventually decided to delay the launch of the Galaxy Fold and this week finished the redesign of the device, although a final launch date is still unknown.

The second iteration of foldable iPad will have a screen on one half, and a physical keyboard with a trackpad on the other half
Reactions: freedomlinux, eXDee, Soccertess and 26 others

Who asked for this???
We want a foldable phone!

I want a foldable Mac Pro.
Reactions: venusboy, xalea, bliss1111 and 28 others

I'd actually buy this, for travelling and meetings.
Last edited: Jul 5, 2019
Reactions: NMBob and BruiserB

This could be worth getting bent out of shape for
Reactions: TreborRevots, xalea, jchap and 3 others
R

The bad jokes have already begun. Lord.
Reactions: smirking, Shirasaki, shieldcy and 7 others

If Apple managed to nail the design it's be fascinating. However, I shutter to think of the price of this iPad Pro.
Reactions: George Dawes, Brandhouse, xalea and 8 others

2020? Lol. Yeah, right. More like 2025, with a starting price of 10K by the point.
Reactions: Precursor and Howyalikdemapls
L

Not a chance.
Reactions: darkcompass, Brandhouse, Precursor and 9 others
J

The mockup shows how it could be folded for portable settings where screen size is less urgent (squeezed into an airplane seat, notetaking in business meetings, at conferences, etc) and then fully expanded with a separate keyboard in a desktop setting, where screen size is almost always a top priority.
Reactions: George Dawes and GrumpyMom
T

It's actually not that bad idea though. It seems like a natural state for this iPad is...an iPad, so it wouldn't be closed for all-day-long which results in lesser wear&tear on the flexible display.

Yep, we're just waiting for Apple to include it in their marketing at this point.

So that'll be when the ADL decide the tech is magical rather than junk that no one has asked for.
Reactions: PC_tech, SDRLS and Cape Dave

OK, whatever, BUT
if there is a demand for more iPad screen (and I think there is) a much easier, IMMEDIATE solution is to allow people to use their iPhones as an iPad keypad!

Almost everyone who owns an iPad also has an iPhone, and usually has it present on their person. I think there should be a quick toggle on the on-screen keypad, like the microphone button, to switch to using iPhone for keypad. That would free up a third of the screen and work well for many use cases.

Apple's willing to think alternatively with things like Sidecar! Build on this by creating SideCar for iPad!
Reactions: Analog Kid

I'm surprised there isn't more talk about the keyboard. I think this is the start of digital keyboards. We already have thin as hell physical keyboards that people complain about, wouldn't be surprised if even the MacBooks go all digital keyboard in 2020 or shortly thereafter.

Can't say I'm thrilled but definitely looking forward to a high speed keyboard that adapts to my usage that won't wear over time. I'm one of the 10% that hits the spacebar with my left thumb, etc...

Not a fan of foldable.
Reactions: Dopestar

I’m not sure of the reason for foldable iPad. To make it more portable? I guess.
Reactions: NMBob

The way most apps work on iOS with a bluetooth keyboard.... you are staring at the bottom of the screen once you enter a page of text. Really annoying. They'd have to redesign it to keep the focus at the top.

BigMcGuire said:
I'm surprised there isn't more talk about the keyboard. I think this is the start of digital keyboards. We already have thin as hell physical keyboards that people complain about, wouldn't be surprised if even the MacBooks go all digital keyboard in 2020 or shortly thereafter.

Can't say I'm thrilled but definitely looking forward to a high speed keyboard that adapts to my usage that won't wear over time. I'm one of the 10% that hits the spacebar with my left thumb, etc...