Some Tattoos Found to Interfere With Apple Watch's Sensors

A growing number of users have turned to social networks claiming that full sleeve tattoos, ones that stretch to cover the wrist, interfere with the Apple Watch's heart rate sensor and skin contact registration. Consequently, some Apple Watch users with tattoos have been unable to receive notifications and are frequently prompted to re-enter their passcode, if one is set, on the wrist-worn device. 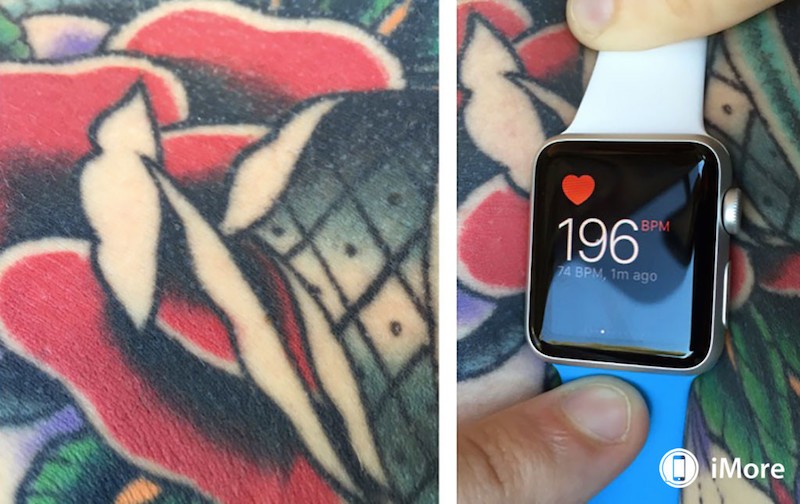 A popular Reddit thread discussing the issue has received nearly 700 upvotes and 300 comments since being posted on Tuesday, and some users have unfortunately already coined the phrase "Tattoogate" to describe the problem. iMore soon followed up with a report confirming the issue, with the Apple Watch displaying inaccurate heart rate readings on the wrists of people with dark-colored tattoos.

"So I thought my shiny new 42mm SS watch had a bad wrist detector sensor," writes Reddit user guinne55fan. "The watch would lock up every time the screen went dark and prompted me for my password. I wouldn't receive notifications. I couldn't figure out why especially since the watch was definitely not losing contact with my skin. also I couldn't find anything online with people experiencing this issue. I was about to give up and call Apple tomorrow when I decided to try holding it against my hand (my left arm is sleeved and where I wear my watch is tattooed as well) and it worked. My hand isn't tattooed and the Watch stayed unlocked. Once I put it back on the area that is tattooed with black ink the watch would automatically lock again."
Click to expand...

The severity of problem appears to depend on the color and ink saturation of the tattoo, with darker, solid tattoos causing the most interference with the Apple Watch's sensors. A temporary solution for affected users is to toggle off Wrist Detection in the Apple Watch app under the General menu on the main settings tab, but doing so will disable Apple Pay from being used on the Apple Watch.

iMore also points out that natural skin pigmentation does not have the same affect on the Apple Watch's sensors, so there is no reason to be worried if you have darker skin. But if you have tattoos, the best advice for now is to try out the Apple Watch yourself and rest assured that the device has a 14-day return policy. Apple has not provided comment on the matter, but we'll keep you posted if we hear anything.

hahahahahahahhaha, perhaps the most unanticipated apple watch problem. really never expect that to pop up.

the watch detects your heart-rate by using a green light to best reflect your bloodflow. it's only natural that if you have some thick pigmented tattoos that this light would be unable to penetrate the skin and the watch be unable to give a clear reading
S

You're tattooing it wrong?

You're tattooing it wrong.

Wow, didn't see this coming. Either you dont use an apple watch or buy a new arm.
M

In the video, why does the watch continue to say "0ft" next to distance even though he's walking?
G

Here come all the "Don't get tattoos" comments.

So in four years of development, Apple has not once tested this on tattoos?
A

Haha 'tattoo gate' is one of the tags.

stock is down today. They never tested tattoos in their lab.

I'm guessing they have a no tattoo policy at Apple. It is a bit amazing they wouldn't have run into one tattooed person of all the employees they tested the watch on.
N

Funny and fitting. Nothing says trash quite like a tattoo.
J

This is going to crush the hipster market.

I hope there comes a resolution as it was likely unforeseen. However, it was a choice to get a tattoo (as I have, as well, so...) and some options in life affect others in an unexpected way sometimes. I can't find it justifiable to blame a device for shortcomings outside of its control. Just need to find a different way, I suppose...

Not a problem, just remove the tattoo.

Mine is that it appears that sweat causes the Digital Crown to seize up.
J

sundog925 said:
You're tattooing it wrong?
Click to expand...

camnchar said:
You're tattooing it wrong.

Conflicts with apple watch and they look like Sh also.

Get a painting, hang it on a wall. You can always change it and not look like a fool.

Tattoos are also generally unique. It's not like there's a standard tattoo or color to test against.

Realistically, they're not going to attempt to change the only way the monitoring can work because some people have tattoos in that area.

At least this issue came to light during the 2-week return window.
X

It's very likely that they did, but what can you do about it. As someone mentioned, it uses green light to detect the blood flow. You can't exactly change physics because a small percentage of people might be affected by it.
You must log in or register to reply here.
Share:
Facebook Twitter Reddit Email Share Link
Register on MacRumors! This sidebar will go away, and you'll see fewer ads.
Sign Up
Top Bottom