Piper Jaffray analyst Gene Munster has long been one of the strongest advocates for an Apple-branded television set, and with increasing claims of just such a product pointing to a launch as soon as the second half of next year, it seems that his persistent confidence in the idea may be panning out. 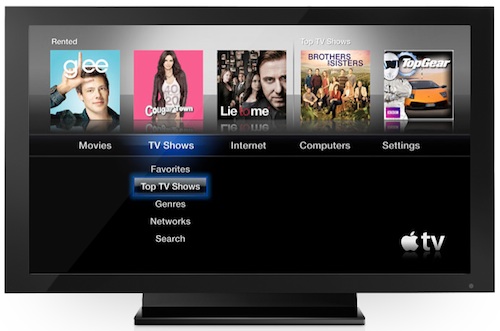 Keeping in mind that Munster does not have specific knowledge of Apple's ultimate plans for its television sets, he does have ideas about what he thinks Apple will do with the product. Business Insider reports that he shared some of those ideas at a conference this morning, going as far as to recommend that anyone thinking of buying a TV wait until Apple shows its hand. Among Munster's predictions:

- Full-fledged television set. Given that Apple seeks to streamline the user experience and its recognition that users don't really want yet another set-top box, Apple will almost certainly be going for an all-in-one solution. But given that Apple does not currently offer a full suite of television content offerings, most users will likely not be able to cut ties to their cable or satellite providers. Apple's TV will instead serve as an advanced interface that still draws upon the standard signal coming in from a cable box.

- Range of sizes and twice current pricing. Munster believes that Apple will introduce its television in a range of sizes, recognizing that customers have different needs. He also believes that Apple will price its television at approximately twice the prevailing market price of similarly-sized televisions. The price premium would cover the additional hardware and software necessary for integration with the Apple ecosystem while also preserving Apple's high profit margins in a competitive market.

- Simplicity and Apple's ecosystem. Aside from the rumored Siri voice-powered interface, Munster predicts that the Apple television will integrate with iOS devices and Apple's content ecosystem for video, games, and apps, serving as another hub for digital entertainment tied into Apple. The interface will likely include a traditional remote control, but also iPad and iPhone apps for controlling the set's features, as well as Siri voice control that seeks to remove much of the complexity of interacting with television sets. Users will simply be able to input or say "ESPN" to be taken to the sports channel rather than having to look up or remember the channel number.

In line with some of the other predictions and rumors, Munster sees the Apple television set making an introduction late next year, in time for the 2012 holiday shopping season.

Anyone could have come up with that speculation. It doesn't reveal any information that anyone wouldn't have normally assumed.

if they double the price i don't see them selling a ton...I know it won't be on par with the TV's, but double...not buying it.
F

Anything Munster says is pure BS, he's been wrong so many times he has no credibility left.
P

Icculus said:
if they double the price i don't see them selling a ton...I know it won't be on par with the TV's, but double...not buying it.
Click to expand...

As a long-time Apple shareholder, and enthusiast, this move scares me. It feels like it could be a miss-step. I don't think they can go into a low margin business and reinvent it if people still need to have cable or Directv. If they were able to remove that piece, then I think they can justify a premium.

TheJing said:
They could put the price at 7000$ people would still buy it.
Click to expand...

Between my DVR, AppleTV and Verizon fios interface I really don't need my TV to do all that much more. I hardly use Siri on my phone. I'm okay with hitting the favorites button on my remote and not talking to my TV.
N

Why would apple make a remote. Most likely the would just sell the tv with a iPod included.
D

If it's worth twice the price, I'll pay for it. But..then I better be able to updgrade the OS, etc. for several years without needing to buy a new TV. (I'm looking at you Siri!)

No way I'd shell out that money every year or two.

They need to strong-arm the TV business into delivering cheap content the "Apple way", just like they did with music.

... Otherwise it's not even worth making the TV.

I'll bet half the posters here could have written a more accurate prediction of an Apple TV set.

...and their speculation be worth just as much as this guys.

No remote. No set-top box. Def need to attack the distribution model.
V

They could drop the cable box if they used CableCards (as TiVo does). And if Apple could get cable vendors to actually treat CableCards as first-class citizens, it would be a major win. Comcast techs, at least, never have a clue when they need to fix a CableCard problem.
O

Apple's competition here is itself.

HarryKeogh said:
Between my DVR, AppleTV and Verizon fios interface I really don't need my TV to do all that much more. I hardly use Siri on my phone. I'm okay with hitting the favorites button on my remote and not talking to my TV.
Click to expand...

You're not the target market. Cord Cutters and people that want more integration with web/download content and computing are more of the target.

Apple's competition here is itself.

Why freak out at twice the price? Almost all of Apple's products are twice the price of their "normal" market sector average, but we don't care! We pay the premium for the incredible quality, fantastic designs, outstanding customer service and support ... which you probably won't get with the cheaper "solution".

I honestly wouldn't be phased at paying the additional amount, but I can't speak for others.

I love all things Apple - I have two Macs at home and one at the office, and I'm on my second iPhone. If this is true, though, it will fail miserably. I think people would be okay paying slightly more than a competitively priced TV plus the price of the Apple TV set top box, but if Apple's TV is more than $300 or $400 more than the competition, they'll lose most of their market. In the computer and smartphone world, they can get away with charging 10-25% more than competing products, but that's the highest margin they can achieve in the TV world and attain any success. Double the price of existing TVs will be a flop.
Y


as well as Siri voice control that seeks to remove much of the complexity of interacting with television sets.

This is idiotic. On the list of things you "interact" with, are TVs really that hard. give me a break...

Icculus said:
if they double the price i don't see them selling a ton...I know it won't be on par with the TV's, but double...not buying it.
Click to expand...

Isn't that what critics said, including the infamous Mr. Balmer, about the first generation $600 iPhone? Unsubsidized as well.
P

The idea of a control device that's voice and iPad-like represents 80% of an "Apple TV's" charm. I'm surprised no one a widely-available app that does this--do they?

Yvan256 said:
People replace their television every decade or two.
Click to expand...

TV box is still the best way to go about the whole idea. It's small, low-cost and works with any television with an HDMI input. And because of its low price, it doesn't really matter if it must be replaced every few years.

I'm not saying an Apple television set is a bad idea, but if it's the only option and they remove the current little

TV box as an option, it'll never catch on as much as it could be. The goal here shouldn't be to replace Sony, Sharp and other television manufacturers. The goal should be to replace all those cable and satellite companies as content providers.

THIS GUY IS A FLIPPING GENIUS!

Seriously, everything this guy said - we already figured.