Spotify has been making inroads in the podcasting market over the course of the last few years, ramping up its original podcast offerings and making major acquisitions like Gimlet Media, Parcast, and Anchor, as well as scoring key deals such as the rights to the popular Joe Rogan Experience podcast. 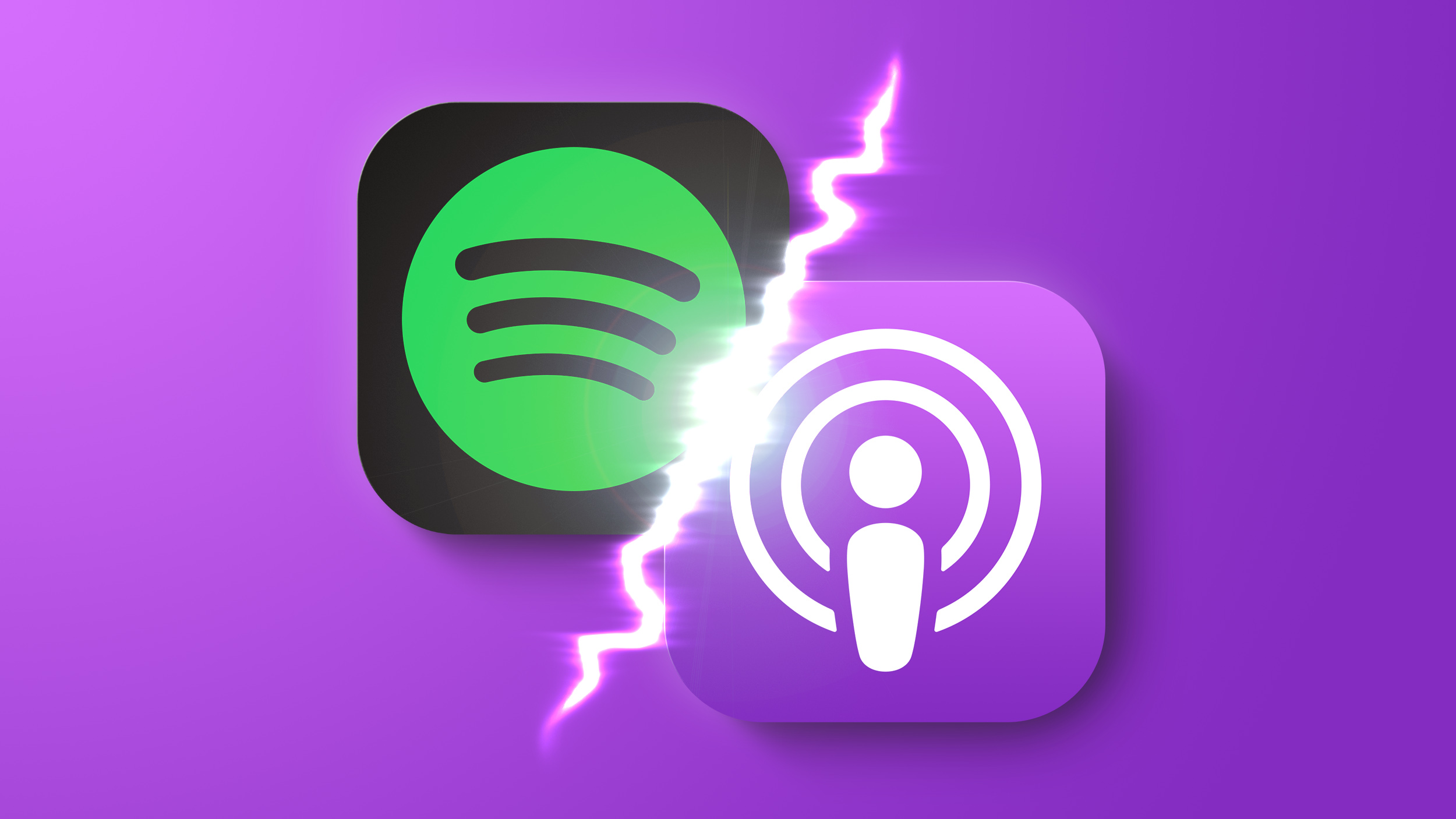 Spotify's efforts may be paying off, according to a new forecast shared today by eMarketer (via TechCrunch) that predicts Spotify could soon have more podcast listeners than Apple. 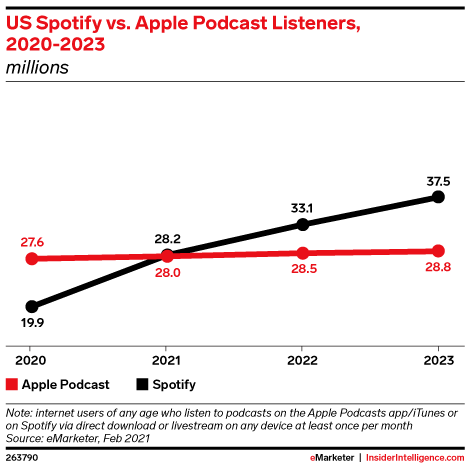 In 2018, Apple Podcasts represented 34 percent of podcast listeners, a metric that will fall to 23.8 in 2021. Spotify's rise in popularity can be attributed to Apple's failure to match Spotify's pace of investment and innovation in the podcasting space, according to eMarketer analyst Peter Vahle.

"By putting podcasts and music in one place, Spotify quickly became the convenient one-stop-shop for everything digital audio," said eMarketer forecasting analyst at Insider Intelligence Peter Vahle. "Apple was the de facto destination for podcasts for a long time, but in recent years, it has not kept up with Spotify's pace of investment and innovation in podcast content and technology. Spotify's investments have empowered podcast creators and advertisers through its proprietary hosting, creation, and monetization tools."
Click to expand...

Apple is working to counter Spotify's deep investments in podcasting with its own original content. Apple recently debuted the first podcast based on "For All Mankind," one of its Apple TV+ shows, and more TV-related content is expected to come out.

As of November, Apple allows Apple Podcasts to be embedded on the web to increase visibility, and in January, Apple launched a new Podcasts Spotlight feature to highlight rising podcast creators. Apple is also said to be working on a podcast subscription service to better allow it to compete with Spotify by luring content creators with the promise of more money.

It's worth noting that eMarketer's analysis is based on estimated podcast listeners, and there is no concrete data available from Apple on the number of people in the United States who are listening to podcasts.

Shame---Apple was the OG distribution system (and perhaps still are for all I know).
Reactions: ouimetnick, xpxp2002 and macsound1
K

Spending a boatload of money on content will do that.
Reactions: michaelnugent, ineedanaccont, macsound1 and 6 others
S

Spotify app continues to provide a much better experience overall and suggests far better music. Same goes for Podcasts. There’s a reason apples afraid to let you specify default music apps. Even the current implementation is hokey and requires a convo with Siri lol
Reactions: michaelnugent, TravelsInBlue, quaresma and 25 others

Podcasts started out great. Then, like everything, through a combination of bloat and neglect, the podcast experience has become yet another sewer.

If Apple is unwilling to dip their feet in the bottomless lake of advertising they will ultimately fail on this front.
Reactions: Alfredo_Delgado, Agit21, betterbegood and 1 other person
S

I'm a luddite at this point and only listen to music on my computer (which connects via AirPlay to speakers) so I can't speak to the mobile experience, but I personally use Spotify just because I think the software is better. The music catalogs are virtually identical, so it's like picking a browser. And to me, Spotify's is better. Strange given what a large lead Apple had for so many years, but I find myself at this point using a Mac as the platform and virtually every app I use on it is third party or a web app, and it used to be that I used almost all first-party apps.
Reactions: Alfredo_Delgado, xyz01, motulist and 5 others

Its a combination of spending money to make exclusive content and continuously updating their podcast player. A year ago I would not have imagined abandoning Apple Podcast for Spotify (even though it is my music player). Today? Today I actually use Spotify for both. They update their app every week. Some updates are smaller than others, but they are consistently working to make an overall better user experience and I think they are starting to knock it out of the park. I don't agree with the business practice of creating exclusive podcast content, but Apple Music has been doing that for years with particular artists.
Reactions: Alfredo_Delgado, Digital Dude, dylanlive and 5 others

I was/am a huge Joe Rogan fan, but I haven't listened to any of his Spotify output as I can't be bothered with yet another app.

Being able to listen to entire 2-3 hour shows on YouTube was perfect. What I missed on YouTube I caught up with on Apple Podcasts.

Podcasts were meant to be available to all. Exclusivity/greed has ruined it, like it ruins everything else.

Yeah, I could just download Spotify. I guess I would need to become a Premium member to get an ad-free experience. I like Joe, but not at £9.99 a month or whatever Spotify charges.
Last edited: Mar 2, 2021
Reactions: topmounter, Digital Dude, Sandstorm and 4 others
J

And how many of Spotify’s podcast listens are just for Joe Rogan..!
Reactions: Alfredo_Delgado and PlayUltimate

I would listen to podcasts on my iPhone or my Mac, but I more or less stopped when Apple broke up iTunes into three different apps. It was even better when the iOS App Store could be accessed that way as well.
Reactions: NMBob and rochford
R

Spotify had around 30 million paid subscribers when Apple Music launched, that number is over 150 million now.

This does not surprise me in the least. Has anyone at Apple actually attempted to use Apple's Podcast app? It's absolutely terrible. I mean, it's not even intuitively obvious how to play episodes (reliably) in proper chronological sequence! That's really important for those podcasts with intense, literary, plots to follow. You know, like My Dad Wrote a Porno*. Try figuring out what's going on in that if you get them out of order! Heck, try figuring out what's going on in that in any given sentence for that matter, even if you're listening to it correctly! But really, Apple's Podcast app is hands-down the worst Podcast app I've ever seen, so it's not surprising that people are using other ones. Think Different! Overcast is pretty nice. Or Spotify.

robertcoogan said:
I would listen to podcasts on my iPhone or my Mac, but I more or less stopped when Apple broke up iTunes into three different apps. It was even better when the iOS App Store could be accessed that way as well.
Click to expand...

I'm confused. Breaking it up into different apps was 100% the right thing to do. It makes it so much easier to find/consume content & mirrors iOS devices.

A one-stop app for everything was a horrible experience.
Reactions: tom.bcn, EmotionalSnow, motulist and 1 other person

panjandrum said:
This does not surprise me in the least. Has anyone at Apple actually attempted to use Apple's Podcast app? It's absolutely terrible. I mean, it's not even intuitively obvious how to play episodes (reliably) in proper chronological sequence!
Click to expand...

It really is intuitively obvious though. How much more simpler do you want it to be?
Reactions: Alfredo_Delgado and 0982786
A

spotify as a podcast app is horrible. The apple podcast app isn't great either but it's certainly better than spotify. But neither are my go to.
Reactions: Complex757, Alfredo_Delgado, boss.king and 7 others
F

Do people really find it "convenient" to have music and podcasts in the same place? I don’t really see a benefit there.

I don’t believe many people are switching from Apple podcasts to Spotify (except when listening to exclusive content of course). But certainly Spotify adding Podcasts has significantly increased the total audience by putting them in front of more people.
Reactions: Jayayess1190, lionel77, Sandstorm and 4 others

Doesn’t matter to me either way. Far, far too many podcasts out there and many are very poor quality.
Reactions: idrewuk, NMBob and xpxp2002
R

archer75 said:
spotify as a podcast app is horrible. The apple podcast app isn't great either but it's certainly better than spotify. But neither are my go to.
Click to expand...

Spotify won’t be the top dog forever. Either Apple of some other company will eat their lunch and either way apple will be there to sell whatever iDevice the user needs to listen to.
Reactions: Maconplasma, Sandstorm, redtape and 2 others
J

I use Music and Pocket Casts, but have often wished I could combine podcasts and music into a single playlist. I can totally see why Spotify users would naturally use the app for podcasts as well.

That being said, Apple makes no money from people using their podcasts app so I struggle to see how this matters at all.
Reactions: xpxp2002, redtape and archer75
R

easy4lif said:
Spotify won’t be the top dog forever. Either Apple of some other company will eat their lunch and either way apple will be there to sell whatever iDevice the user needs to listen to.
Click to expand...

Apple has had five years to eat Spotifys lunch, in that time Spotify had added more subscribers than Apple has.
Last edited: Mar 2, 2021
Reactions: motulist, Digital Dude, Naraxus and 3 others