Phone Scoop yesterday discovered new regulatory filings posted by the U.S. Federal Communications Commission showing a new Sprint-branded 3G mobile hotspot device manufactured by ZTE that appears to be in the form of a designed case to wrap around Apple's iPod touch.

The Peel, as FCC photos suggest it will be called, seems to be a carriage sled for a tablet style device like the iPod touch. The Peel does not seem to connect to its host device, and it seems to be a specially designed Wi-Fi hotspot device that could offer EV-DO networking to an iPod touch in a package that could be clamped to Apple's Wi-Fi-only iPod.
Click to expand...

In addition to apparently allowing an iPod touch to connect via Wi-Fi to access the case's 3G data capabilities, the user manual suggests that the Peel would serve much like a traditional 3G mobile hotspot, allowing up to five devices to connect to it to share the Internet connection. 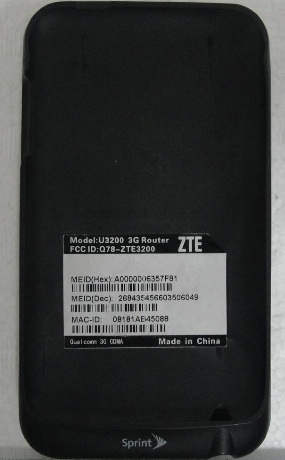 The Peel would not be the first time Sprint has tried to tap into the Apple iOS ecosystem to promote its mobile hotspot devices. Earlier this year, the carrier released a television commercial touting its Overdrive 3G/4G mobile hotspot device by claiming that Apple's iPhone could achieve a ten-fold increase in data speeds by connecting through the Overdrive on 4G as opposed to the iPhone's built-in 3G connectivity through AT&T.

Soon after the launch of the Wi-Fi iPad in the U.S., Sprint also rolled out a free "4G case" to hold both the iPad and the carrier's Overdrive hotspot device, promoting the package as a way to achieve high-speed mobile connectivity with the iPad and other mobile devices.

What are the prices/plans? I'd buy that ... maybe.

I bet Steves going to be pissed.

That really puts the ug in ugly.

Why would you do that to your poor iPod Touch?

Vertigo50 said:
That really puts the ug in ugly.

Why would you do that to your poor iPod Touch?
Click to expand...

It's a Mobile Hotspot!

why buy this to pretend like it's a phone? just by one of those mifi thingamabobs

Couldn't they have made it a little thinner?

Oh man this would be so awesome. Partly because it looks like a pretty sweet product, but mostly because it would piss steve jobs off so much!

Innovation with Apple products once again...too bad its not from Apple.
M

SAD*FACED*CLOWN said:
why buy this to pretend like it's a phone? just by one of those mifi thingamabobs
Click to expand...

It is a Mifi. Just in an iPod case so that you're not carrying 2 gadgets (Mifi, iPod Touch).

Sprint needs to brand this as the "Unicorn Saddle"
6

Nice idea. A "pay as you go" plan for it would be an option I would consider.

That... is a great idea. How did it take this long for someone to do it?

Design could use some work, but for a first-gen device it's pretty impressive.

Vertigo50 said:
That really puts the ug in ugly.

Why would you do that to your poor iPod Touch?
Click to expand...

Port your cell number to Toktumi's Line2 installed on the next gen iPod Touch (if it doesn't include 3G service) or iPad? That would be a deal for me.
X

Cool concept, but I do not like the device.
X

"a designed case to wrap around Apple's iPod touch"

I don't see any evidence of those possibilities. Was it described in the FCC filings?
H

That's one ugly big ass router/hotspot thingy.......for the price of that + an ipod touch you might as well just buy an iphone.
B

Great idea for a 3g iPod Touch but I don't think it can really replace a phone like I have seen a lot of posters on Engadget saying. The problem is no mic or earpiece built in, so you have to use apples headset that comes with iPhone. Then you have to use google voice or skype and you are still paying sprint for data... And since sprints other mifi devices are $60 a month... why not just get an actual phone... I love the idea but I fail to see the practicality of it...

I don't see any evidence of those possibilities. Was it described in the FCC filings?
Click to expand...

the only evidence I see for it specifically being designed for the iPod Touch is the placement of the headphone port.

For only a $40+ a month you can have Sprints WONDERFUL 3G coverage plus whatever ridiculous amount of money they are going to charge you for the hardware.

Have you heard of the iPhone 4??

to use Google Voice you need a phone number...I think people confuse Skype and Google Voice...

VERY smart move on Sprint's part. I can see a lot of these selling.
I bet it's not that much thicker than the 3GS with it on the Touch.

Apple should just buy out Sprint or T-Mobile and quit screwing around with AT&T. THEN they'd have some real fun. Course then the data plans would probably be outrageous...even by Apple standards
You must log in or register to reply here.
Share:
Facebook Twitter Reddit Email Link
Top Bottom