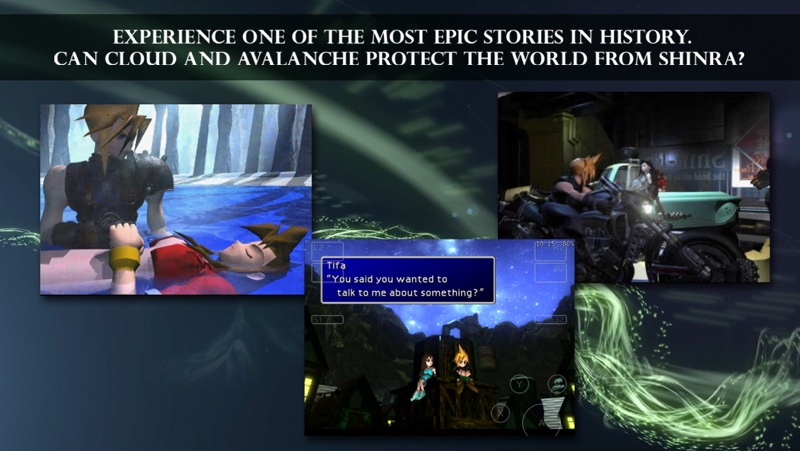 According to Square Enix, the iOS version of Final Fantasy VII is a port of the PC version, with no changes or additions to the storyline.

With its unshakeable monopoly over Mako energy production, the evil Shinra Electric Power Company holds tight to the reigns of wold power. One day, a Mako reactor serving the sprawling metropolis of Midgar is attacked and destroyed in a bombing raid by a revolutionary group calling themselves Avalanche. Cloud Strife, a former member of Shinra's elite "Soldier" unit takes part in the raid as a mercenary hired by Avalanche and sets events in motion that will draw him and his friends into an epic struggle for the fate of the planet itself...
Click to expand...

The iOS port of the game includes a virtual on-screen controller that's "designed not to obscure the action." It offers virtual analog or fixed 4-way digital control pad options and the opacity of the on-screen controls is adjustable. Also new to the iOS version of the game is an option to turn off enemy encounters in area maps and a Max Stats command to "become all-powerful in the blink of an eye."

It's taken several years for Square Enix to bring Final Fantasy VII to the iOS App Store, largely due to space constraints. In 2013, Square Enix producer Takashi Tokita said that a release of Final Fantasy VII was years away because of space limitations. "It's that currently, space will be an issue," he said. "Phones won't be able to contain the space it takes. It's over a gigabyte. People are probably going to have to wait for a few years."

In February of 2015, Apple expanded the size limitation on apps from 2GB to 4GB, paving the way for apps like Final Fantasy VII. According to the App Store description of the game, it takes 1.66GB of storage space, but requires more than 4GB of free space to download.

Final Fantasy VII is compatible with the iPhone 5s or later, the third-generation iPad or later, and the iPad mini 2 or later, with Square Enix warning that the game may not perform well on earlier devices. iOS 8 or later is also required.

Final Fantasy VII can be downloaded from the App Store for $15.99. [Direct Link]

$16 ! That's pretty expensive for a port that's already been ported to other new platforms last year... Not like it required huge loads of work and reverse-engineering to understand old code or anything...

Plus it's hard to believe it's 1.7 GB, since the original game had 3x 650MB CDs with a LOT of shared content. Unless they re-mastered the resolution of textures and cutscenes maybe ? And adapted the game to Retina Displays ?
Reactions: midwich, ikir, c1phers and 5 others
C

Nice. Hopefully they bring FFVIII next. I'd buy that one instantly.
Reactions: TheMountainLife, skinned66, chrisbru and 1 other person

Filthy beggars going from port to port.
Reactions: TWSS37, mbc2237, redscull and 14 others

16 USD is pretty tough for a game that's almost 20 years old, but I guess they know exactly how many people have been waiting for this.
Reactions: ikir and Exotic-Car Man
F

I'm shaken by the lack of MFI controller support.
Reactions: ikir, bchreng, the-oz-man and 5 others

I think I'll pass. Already have it for my PS3 and ps vita. Don't see a reason to buy it again.

Gave SE my support, probably won't be playing the game though.

I vaguely remember this game from my youth (never finished it). I remember it being dirty, but maybe that was just a small child's impression.

Might have to give it a go. I promised myself I wouldn't buy anymore Square Enix games be issue their support is terrible. (Lack of updates, incompatible with newer iOS version, etc). Still, they make some of the best games...
Reactions: bchreng

Bring me the remaster announced at E3 and my $16.99 will be waiting.

I spent too much time maxing out materia and beating all of the weapons, et Cetra (get it?) to play it again as is.

Traverse said:
I vaguely remember this game from my youth (never finished it). I remember it being dirty, but maybe that was just a small child's impression.

Might have to give it a go. I promised myself I wouldn't buy anymore Square Enix games be issue their support is terrible. (Lack of updates, incompatible with newer iOS version, etc). Still, they make some of the best games...
Click to expand...

Think the closest thing that is dirty is Tifa's big "coconuts" but no nudity.
Reactions: orbital~debris and dec.
D

I tried a Final Fantasy game on the PSP once, but never really got into it. I never finished it.
S

I bought it. Was hoping for MiFi support, even though I don't have a controller and likely wouldn't fork out $60 for one. Can't wait to play this game again! I think I played it in 2000 which was 15 years ago, so I don't remember anything about it other than I liked it.

Has anyone found a way to make the "pillarboxes" black instead of gradient blue? Changing the window colour in Config doesn't do it.
F

No sale without MFi
Reactions: ikir

I wonder how many % I have to be in order to successfully summon Knights of the Round without my iPhone dying on me and I end up restarting at a save point. Oh crud... save points...
Reactions: chrisbru and saxon48

Bbqthis said:
It does support MFi controllers.
Click to expand...

No. It does not.
Reactions: ikir and bchreng

Agreed, and less importantly, iCloud support as well. Although all is not lost. Square added iCloud support to its existing FF games in later updates, so probably in due time.

Wreckus said:
Think the closest thing that is dirty is Tifa's big "coconuts" but no nudity.
Click to expand...

There was also quite of bit of swearing... and the entire honeybee inn mission where you crossdress to save your friend in a brothel and nearly get gangbanged by 9 muscular men soapland-style.
Reactions: LS1, chrisbru, mrnoark and 2 others

I downloaded the game on my iPhone 6 Plus and there's sound.

Anyone have suggestions on what I should do?

jamescobalt said:
There was also quite of bit of swearing... and the entire honeybee inn mission where you crossdress to save your friend in a brothel and nearly get gangbanged by 9 muscular men soapland-style.
Click to expand...

Oh yea, forgot about that. Thanks for the reminder..

CEmajr said:
Nice. Hopefully they bring FFVIII next. I'd buy that one instantly.
Click to expand...