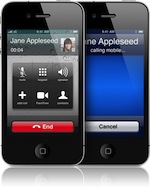 Apple CEO Steve Jobs has been busy in recent days responding to customers emails, many of which have been addressing signal issues on the company's new iPhone 4. Boy Genius Report shares a new conversation between Jobs and a customer on the issue containing several interesting aspects.

First, it appears that contact was initiated by an Apple engineer who reached out to the customer after seeing a YouTube video regarding the issue posted by the customer. The engineer reportedly informed the customer that Apple does not consider it a problem and asked him not to post any additional videos.

Unappeased, the increasingly agitated customer continued to press the issue by claiming that the entire country must have low signal strength. Not willing to give up the fight, however, Jobs replied yet again to claim that the customer "may be working from bad data" and reiterate his earlier suggestion that customers should "stay tuned." Jobs also noted that Apple is "working on it", although it remains unclear exactly how the company is planning to address the issue.

Jobs also sent one final message, encouraging the customer to "retire, relax, enjoy your family. It is just a phone. Not worth it."

Update: The last quote was written by the reader, not by Steve Jobs.

I await the next 18 pages of fighting.

Seriously, I can reproduce this issue if i hold the phone in a very uncomfortable and unnatural way for me.

Rather than holding it from the top, slide it so that your left thumb is below the - button. Its a more secure way to hold the phone. If you cup the phone, your fingers wrap around and your palm will be up against your face when bringing it up to your ear. Plus your fingers will block the screen.
A

Not worth it. Wow.

Now he says its just a phone? At least they are working on it, Im not sure its fair to judge jobs' responses without seeing what the customer sent though.
P

As someone who hasn't ever owned an iPhone and won't have one for another year or two, I must say I take more pleasure from Steve Jobs' responses than I take anger from the reality of this issue.

"It is just a phone. Not worth it" - the thing I tell myself every day when I consider pitching my POS phone at the wall...and then I make a call, whatever my reception.

Snappppp, this isn't the old Jobs this is the new improved skinny Jobs-lol
D

It's $200.00 out of pocket and a two year contract with *more* drop calls in more places and bad reception is what it is.
P

Makes me feel better about keeping my 3GS and unlimited data plan.
R

Is it a non-issue or is Apple working on it? Can't really be both can it?

Also, anyone see the irony in "Stay Tuned" for antenna issues? I think it's funny as hell.

I doubt there is much they can do to "work on it." This isn't something I imagine they can fix with a software update. Nevertheless, I have not had any issues with reception while holding my phone at the bottom left corner.
S

I think I am starting to actually like Steve Jobs more... he doesn't get all politically correct and try to sugar coat this stuff. It's kind of refreshing to actually hear what someone in the public actually thinks.

I may disagree with him about it being a non-issue... but it's still nice of him to be honest about what he thinks. Let's ya know where you really stand.
K

How can you be working on something that he claims doesn't exist?
S

while i agree that the "problem" is blown wayyyyy outta proportion and to not really worry about it, saying its "just a phone" is a bad move.... yes it may be just a phone, but its also $300 plus monthly fees... and some people feel (i dont, mine is perfect) like they are being ripped off.

Unfortunately jobs is the one laughing with beds made out of cash.

honestly, i hold my phone normally but no death grip and it works fine. whoever is complaining about reception must be a perfectionist and require 4 bars at all times or scratched their phone already and is trying to weasel their way to getting a brand new one. shut the hell up and enjoy your iphone 4.

In the grand scheme of things Jobs is right. It is just a phone and not worth getting worked up over. It's not like oil contaminating the gulf or anything. Even so, I think there is a real problem (whether or not it is widespread is another issue) and I think it should be addressed promptly.
G

If you read the transcript on BGR, you get a better understanding of Steve's last response. The guy was being very dramatic.

This is the guy's last email, which prompted the "relax" comment.

Stop with jackass comments. I have has every iphone made. They all had a bad signal but this is the so much worse X3. The whole country is is in a low signal strength in reality all but apple campus and your house it seems? AT&T maps are a joke. I am in excellent to good coverage and on my iPhone 1, Iphone 3G, and my iPhone 3Gs, I could at least make a telephone call. After all, it is a phone. Iphone 4. 5 bars.. touch the phone ZERO bars call drops.
Steve. IT DOES NOT WORK! Geezzz I hope this this is not really you. Are we on a different MHz? I have yet to see an iPhone [4] work in Richmond when you hold it in your hand. It is not isolated. I was a big fan. But I am done.
Z

whatever it takes
W


levitynyc said:
I await the next 18 pages of fighting.

Seriously, I can reproduce this issue if i hold the phone in a very uncomfortable and unnatural way for me.
Click to expand...

Anyone that holds their phone in their left hand will have this problem.

Apple needs to straighten things out. Is this is a firmware fix or is this a legitimate hardware problem? Will 1.7 million+ iPhone 4 Customers have to take back their phone in order to get it fixed??

I'm holding tight onto this 3GS until the smoke clears. SJ should stop answering these e-mails.

nwcs said:
In the grand scheme of things Jobs is right. It is just a phone and not worth getting worked up over. It's not like oil contaminating the gulf or anything. Even so, I think there is a real problem (whether or not it is widespread is another issue) and I think it should be addressed promptly.
Click to expand...

Are you siding with Jobs on this? Do you have an iPhone 4? Give it away to charity. Relax, it's just a phone. Everything will be fine!
You must log in or register to reply here.
Share:
Facebook Twitter Reddit Email Share Link
Register on MacRumors! This sidebar will go away, and you'll see fewer ads.
Sign Up
Top Bottom