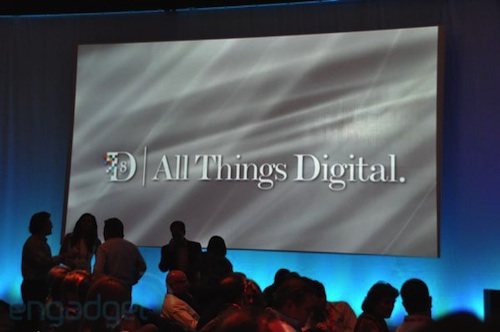 Apple CEO Steve Jobs is at the D8 Conference this evening, participating in an opening session involving a sit-down interview with All Things Digital's Kara Swisher. John Paczkowski is officially liveblogging tonight's interview while Engadget and CNET are also offering live coverage, and we'll be keeping track of any significant revelations coming out of the event. While Jobs is not expected to make any product announcements, the format will likely allow for some informal discussion and insight into Apple and Jobs that could prove interesting.

The opening session is just getting underway, with News Corp. CEO Rupert Murdoch currently giving some opening remarks before turning things over to Walt Mossberg and Kara Swisher.

I hope this becomes a great chance to learn more about what he has to say — particularly about some of the more controversial issues (Adobe, Google, App Store policies, etc.). It's always interesting to see more of his human side.
Comment

does anyone know anything about when a video stream of the interview will be available?
Comment

I'll be surprised if walt doesn't already have one, I mean everyone else does (apparently).

P.S.
Joshua is doing a good job so far Live blogging D8 over at Engadget
Comment

davidgoduke said:
does anyone know anything about when a video stream of the interview will be available?
Click to expand...

davidgoduke said:
does anyone know anything about when a video stream of the interview will be available?
Click to expand...

I would guess with in 24 hours. Its nice, it helps the waiting for the WWCD keynote on Monday.
Comment
B

Wow. I am stunned at how fragile he looks. I wish the guy well but to my eyes he looks bad...
Comment
L

bmstrong said:
Wow. I am stunned at how fragile he looks. I wish the guy well but to my eyes he looks bad...
Click to expand...

They made a big deal of it -- that's why I wrote that letter. I said enough is enough, we're tired of these guys trashing us.
Click to expand...

Admittedly, who really "likes" Flash to begin with? I mean, if everything could be HTML5, wouldn't we all go with that? It seems strange that everyone is making such a fuss about not having Flash when it's a piece of crap technology to begin with. The sooner it dies the better, so maybe Apple can lead the charge with this one too, like they did with the floppy disk, USB, etc.

We don't think this is great and we're going to leave it out. We're going to take the heat because we want to make the best product in the world for customers! If we succeed, they'll buy them! If we don't, we won't sell any. And I have to say, people seem to be liking the iPad! (huge laughs and applause)
Click to expand...

Steve: There's an ongoing investigation. I can tell you what I do know, though. To make a product you need to test it. You have to carry them outside. One of our employees was carrying one. There's a debate about whether he left it in a bar, or it was stolen out of his bag. The person who found it tried to sell it, they called Engadget, they called Gizmodo.

6:38PM Walt: We don't know the whole story... I wanted to ask you about the duality to this. Some people don't approve of checkbook journalism. If what we know is true, but on the other hand the police go and don't issue a search warrant, and they grab someone's computer -- there's a lot of stuff, at least with my computer I wouldn't want anyone to have, and they grab this journalists assets...

Steve: Well a guy... who can say if he's a journalist.

6:37PM The audience just freaked out

6:36PM Walt: So you had a prototype of one of your products that wound up at a bar...
Comment
L

would it kill them to set up a live stream? come on rupert.
Comment
A

LoganT said:
Honestly? I think he looks quite good.
Click to expand...

I can't believe its been a year since he came back in June. He is still pretty thin, but is healthy.
Comment

ya he's grilling him over the seized computers of the journalist.
Comment
C

I for one I'm pretty suprised about that. But it has been a crazy few month for Apple, it would be ridiculous for them not to ask something...
Comment

I guess it makes sense to have the hard hitting topics first and just get them off everyone's chest. Obviously that would be the elephant in the room (the lost iPhone, Flash, Google is inevitably up next...)
Comment

Moving on to Foxconn.


Steve: We had this in my hometown of Palo Alto, copy cat suicides. We're over there trying to understand this. It's a difficult situation.

6:42PM Steve: It's a factory -- but my gosh, they have restaurants and movie theaters... but it's a factory. But they've had some suicides and attempted suicides -- and they have 400,000 people there. The rate is under what the US rate is, but it's still troubling.

6:41PM Steve: We are on top of this. We look at everything at these companies. I can tell you a few things that we know. And we are all over this. Foxconn is not a sweatshop.

So this is a story that's amazing -- it's got theft, it's got buying stolen property, it's got extortion, I'm sure there's some sex in there (huge laughs)...
Click to expand...

This is turning out to be a really good interview.
Comment

6:45PM Steve: And I never have. We never saw ourselves in a platform war with MSFT, and maybe that's why we lost.

Big laughs on that!

eVolcre said:
6:45PM Steve: And I never have. We never saw ourselves in a platform war with MSFT, and maybe that's why we lost.

Big laughs on that!