An image supposedly of an iPhone 12 display unit has been shared online by leaker "Mr. White".

Compared to images of an iPhone 11 Pro display piece, this new unit has a reoriented display connector, reaching up from the bottom of the display, rather than from the left-hand side on iPhone 11 Pro. This may be due to the logic board moving to the other side of the device. A change of logic board position was rumored earlier this year, in order to accommodate the 5G antenna module expected in all four iPhone 12 models. The SIM tray is also expected to move to the left side of the device under the volume button as a result of this change. In May, a logic board also seemingly from iPhone 12 leaked.

It is not immediately clear which size of iPhone 12 this display unit may be from. Given the size of the notch components, it seems likely that this unit is from the anticipated 5.4-inch iPhone 12. Last month, display panels allegedly from iPhone 12 leaked.

The leaker suggests that the notch on this unit is the same size as previous models. Numerous minor disparities between this display unit and that of iPhone 11 Pro suggest that the internal redesign of iPhone 12 could be substantial.

Leaker Mr. White has been known to share accurate information on Apple's future plans and pictures of components from upcoming devices. They have previously released images purportedly of the A14 processor and a 20-watt power adapter, both set to arrive with iPhone 12.

Now this is a proper MacRumors leak not some automated post telling us about beta announcements, etc.
Reactions: jezbd1997, nickgovier, Oscar_440 and 8 others
Comment

Based on where the cutouts for Face ID and the front camera are, it looks like the notch will be unchanged. At least that’s what I assume those circles at the top are for.
Reactions: Coconut Bean, jezbd1997, Ghost31 and 3 others
Comment

Hard to tell without knowing which size screen this is.
Reactions: TheYayAreaLiving
Comment

The evidence is leaning towards only the Pro models getting the smaller notch.
Reactions: MMSZN, jezbd1997, nordique and 1 other person
Comment
F

Keep in mind this is the 5.4 inch model. The notch, if full size, wouldn’t even fit it’s not possible. So yes this notch IS smaller just that the “ears” will appear to be the same as the 5.8” because of how narrow the screen is! Don’t freak out people!
Reactions: Vanilla35 and moabal
Comment
F

JPack said:
The evidence is leaning towards only the Pro models getting the smaller notch.
Click to expand...

A full size notch wouldn’t fit on a 5.4 inch screen. You’d never fit any status bar info at the top with that narrow of a screen and that big of a notch. it’s just perceived to look the same because of how small the display is
[automerge]1596727502[/automerge]

cmaier said:
Hard to tell without knowing which size screen this is.
Click to expand...

I’m praying the 12 Pro has a smaller notch Lol. Seems like all of the leaks are of the 12 and not the Pro.

Definitely going to be a staggered release.
Reactions: TheYayAreaLiving
Comment

frosty18 said:
Keep in mind this is the 5.4 inch model. The notch, if full size, wouldn’t even fit it’s not possible. So yes this notch IS smaller just that the “ears” will appear to be the same as the 5.8” because of how narrow the screen is! Don’t freak out people!
Click to expand...

the today notch can fit easily the 5.4" , the current 5.8" has 144 x 71.4 so an 5.4" by diagonal device will get around 140x 69mm stop dreaming about smaller notch...maybe, just maybe only the pro models will get smaller notch and slimmer bezels...but ..
Reactions: Vanilla35 and JPack
Comment

Why do the "pro" models have to be so enormous? I will not ever buy a phone that big again (made that mistake once). I don't have huge hands and don't like feeling as if I will drop the device. I have an iPad for large screen reading/interacting. But, I don't want to carry that thing around to get pro cameras either. Just make the price difference smaller and cram in the better cameras on the smaller device, people *will* pay for it.
Reactions: PaladinGuy, nickgovier, 1144557 and 3 others
Comment
M

Analysts are always talking about iPhone supercycles. Is iPhone 12 supposed to be a supercycle update? And does it mean that it will take a next full supercycle to get rid of the notch?
Comment

cmaier said:
Hard to tell without knowing which size screen this is.
Click to expand...

Save the picture and than zoom on your iphone X or 11pro and you‘ll have a perfect alignment of the notch
Reactions: macfacts
Comment
G

I would hope the notch would be smaller on the pro models. Look at Samsung. I even preferred the hole punch on the side vs. the center. Im still holding onto my X and hope apple surprises us this fall.
Reactions: 1144557 and compwiz1202
Comment

moabal said:
Now this is a proper MacRumors leak not some automated post telling us about beta announcements, etc.
Click to expand...

...i dont understand the purpose of this comment. beta announcements and new product releases are not tossed around as leak posts. this is a proper leak, unlike those other posts, because this is a leak, and those are not.

Kylo83 said:
What happened to the S year models this would be first year in long time going from 11 to 12 without 11S
Click to expand...

Was hoping to see the front or edge. Im pretty much done with this curved glass fad.
Reactions: Vanilla35 and GrumpyMom
Comment

Lets face it. As with all new phones it will still be an iteration of a square, black mirror. There is nowhere else to go in terms of smart phone design.
Reactions: SuperCachetes and Vanilla35
Comment

Lining up the notches makes it look plausible for the 5.4" device, so I REALLY hope it's not this gimpy squished status bar experience on the 5.4". 😣

*(redline is the screen of the leaked screen part from this article)
* (I got the image of the iphone underneath from a 11pro review, so it's hopefully either the regular 11pro or the max and not the 11 regular, but maybe it will work for notch comparisons.) 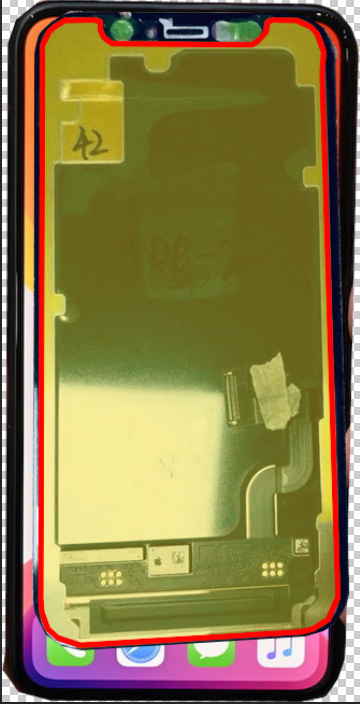 Two different iPhones with the same dimensions sounds like a mess to me. People I talk to already don’t understand why the iPhone 11 Pro is smaller than the iPhone 11 yet more expensive and now we will have two of the same size.

it’s like the iPad and iPad Air existing next to the Pro. Mess to explain to people.

maybe one of them will actually not have 5G or what will the difference be if everything goes OLED besides the camera? Which makes the whole thing even more pointless besides being able to charge more to get the „best“ instead of just naturally improving the camera.

i wouldn’t be surprised if the 6.1 (Device 2.0) takes over the price point of the Max to justify another price hike on the 6.7 device.
Reactions: gleepskip
Comment

Gamewave said:
It should also be noted that it looks like there is only 1 connector. On all other models there are two, one for the display and one for the digitizer. It looks like they integrated all the pins into one long connector. The Apple logo on the silver box is also new. Since the iPhone X, there have not been any Apple logos on the glass or connectors.
Click to expand...