A survey conducted by research firm Creative Strategies last month has found that the iPhone X has a 97 percent customer satisfaction rate, primarily among early adopters of the smartphone in the United States, as noted by John Gruber.

The total includes 85 percent of respondents who said they are "very satisfied" with the iPhone X, which Creative Strategies analyst Ben Bajarin said "is amongst the highest" he has ever seen "in all the customer satisfaction studies we have conducted across a range of technology products."

12 percent of respondents said they are "satisfied" with the iPhone X, while three percent were unsatisfied to various degrees.

Of course, the higher the "very satisfied" responses, the better a product probably is. For perspective, research firm Wristly conducted a survey in 2015 that found the original Apple Watch also had a 97 percent overall customer satisfaction rate, but a lower 66 percent of respondents were "very satisfied."

Apple CEO Tim Cook said the iPhone X has a 99 percent customer satisfaction rate on the company's first quarter earnings call, citing a study by 451 Research, but Creative Strategies said its own survey had a significantly higher number of respondents that led to a more balanced number with room for slight variance.

Creative Strategies surveyed 1,746 respondents to be exact. The research firm informed MacRumors that respondents were profiled as early adopters based on a series of upfront questions about purchasing habits.

On a feature-by-feature basis, the iPhone X saw very high satisfaction rates in all but one area, including Face ID and battery life at above 90 percent. The sole exception was Siri, which scored only a 20 percent satisfaction rate among early adopters, leaving four out of every five respondents unimpressed. 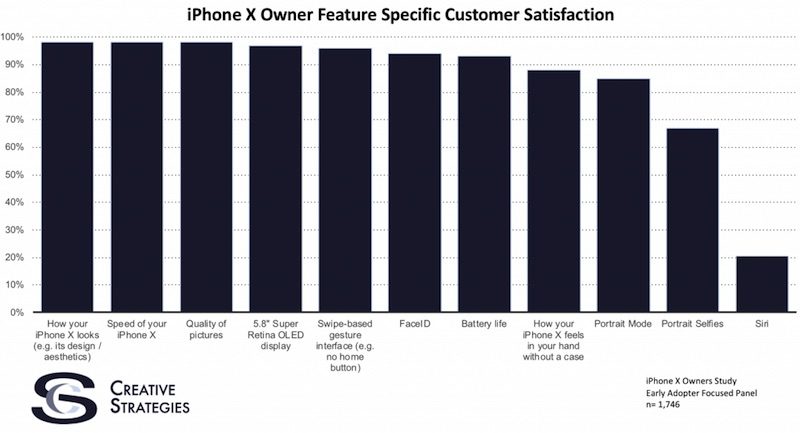 As noted by Creative Strategies, early adopters tend to be more critical than mainstream consumers of technology, but Apple is widely considered to have lost the lead it once had with Siri in the artificial intelligence space.

The Information recently reported that Siri has become a "major problem" within Apple. The report opined that Siri remains "limited compared to the competition," including Amazon Alexa and Google Assistant, and added that the assistant is the main reason the HomePod has "underperformed" so far.

Apple responded to that report with a statement noting Siri is "the world's most popular voice assistant" and touted "significant advances" to the assistant's performance, scalability, and reliability.

"We have made significant advances in Siri performance, scalability and reliability and have applied the latest machine learning techniques to create a more natural voice and more proactive features," Apple wrote in its statement. "We continue to invest deeply in machine learning and artificial intelligence to continually improve the quality of answers Siri provides and the breadth of questions Siri can respond to."
Click to expand...

Bajarin has been a respected technology analyst at Creative Strategies since 2000. For more details from the survey, read Top Takeaways From Studying iPhone X Owners and his paywalled follow-up report iPhone X Study Follow Up on Tech.pinions.

And the notch of course!
Reactions: sdz, gmarm, MrGouda and 5 others

I am a bad liar.
Reactions: martyjmclean, psac, WBRacing and 24 others
J

I don't use Siri for much, possibly because of it's limitations. but it works well enough for HomeKit and streaming music.
Reactions: martyjmclean, andresandiego, ImaxGuy and 4 others

Totally said:
Does anyone actually use siri? lol
Click to expand...

Used Siri once on my iPad, and it was accident.

And man, by using some MacRumors users favourite sentence: this is too small of sample, only 1746 surveyed. Not big enough to represent anything.

I think that Siri is due for an overhaul. I think we will see one by years end.
Reactions: martyjmclean, decypher44, Trolle and 5 others

In other news, the sky is blue!
Reactions: WBRacing, Shirasaki, kironin and 11 others

They should just give up on Siri and develop something new.
Reactions: najkee, Shirasaki, kironin and 3 others

"Focus" is the new Portrait mode ... Instagram gets the credit.

Too easy for many to confuse Portrait "Orientation" with Apple's Portrait mode.
Reactions: Shirasaki, macfacts, decypher44 and 1 other person

I'm very pleased with my I phone X but really stoked to get the I Phone X Plus
Reactions: osx86 and Will.O.Bie
B

My only issue is how awfully buggy iOS 11 is
Reactions: martyjmclean, Pagemakers, crjackson2134 and 2 others

Siri is awful, the notch isn't ideal but livable, but nobody has a problem with the lack of ungroup notifications or even worse the clumsy gesture to get to your open apps and worse hold app to close gesture?

Improve siri or let us use another assistant as the default (yup why not?), give us grouped notifications and get rid of the hold the app to close it and you have pretty darn good smartphone.
Reactions: Shirasaki, NikeSG, ImaxGuy and 3 others

BigCanoe said:
And the notch of course!
Click to expand...

That is part of the first one, "it's design"...
Reactions: iLLUMI and BrennanWDavis

But... but.... MacRumors members insisted it'd be a failure at such a price and no one would buy it.
Reactions: Kram Sacul, Shirasaki, Seoras and 13 others

Sorry Apple, most people don’t care about the jokes you add to Siri.
Reactions: geromi912, typicaluser, martyjmclean and 24 others

Totally said:
Does anyone actually use siri? lol
Click to expand...

I use it every day. I use it for music, texting, alarms, timers, etc.
Reactions: WylyQuimby, Icaras, ravenstar and 24 others
6

Siri does many of things I need it to do but it is so limited in functionality. It's not going to cause me to jump ship but it's definitely dissatisfying as a user. To me it's further evidence that Apple is just not as innovative as it once was. Even the incremental enhancements are pretty ho hum. They just don't seem to be reaching for the stars, all the while falling a little further behind in the "wow" department.
Reactions: bluecoast, sunwukong, eltoslightfoot and 4 others
A

Apple needs to improve Siri. I sometimes swear she's not smart. Improve her.
Reactions: decypher44, Sandstorm, centauratlas and 1 other person

I feel like if Apple can figure out Siri, and by figure out I don't mean just get on par with Alexa and Google, but leapfrog them - it could be the killer feature for not only an iPhone, but also Apple Watch and HomePod.
Reactions: Seanm87, usersince86, emmanoelle and 3 others
I

To some people apple can't do no wrong, and whatever phone device they come out with they are on it quick... just to be ahead and have the latest toy. True hardcore fanboys...
Reactions: singhs.apps, decypher44, Sandstorm and 4 others
T

OldSchoolMacGuy said:
But... but.... MacRumors members insisted it'd be a failure at such a price and no one would buy it.
Click to expand...

Who did this? Your posts are laughingly predictable. The only thing funnier would be to have you support your allegations.

Phogro said:
I feel like if Apple can figure out Siri, and by figure out I don't mean just get on par with Alexa and Google, but leapfrog them - it could be the killer feature for not only an iPhone, but also Apple Watch and HomePod.
Click to expand...

Honestly trying to determine if you are serious or not lol.
Reactions: Oblivious.Robot, crjackson2134, decypher44 and 2 others
S

macduke said:
I am SHOCKED.

Thing is, I actually AM shocked. Not because Siri doesn’t suck. But because normally no one really admits it. There’s usually nothing beyond annocdotes on message boards like this.

Apple really really needs to work on Siri, and it can’t even rely on some manufactured satisfaction rate to show that everything’s fine and dandy
Reactions: singhs.apps, Marekul, kyleh22 and 2 others

Much work needed for Siri to be useful
Reactions: DoctorTech, AppleScruff1, kyleh22 and 1 other person

To me, Siri has actually been getting worse. So frustrating even for simple commands.
Reactions: ixxx69, brgjoe, ibivibiv and 23 others
You must log in or register to reply here.
Share:
Facebook Twitter Reddit Email Link
Register on MacRumors! This sidebar will go away, and you'll see fewer ads.
Sign Up
Top Bottom