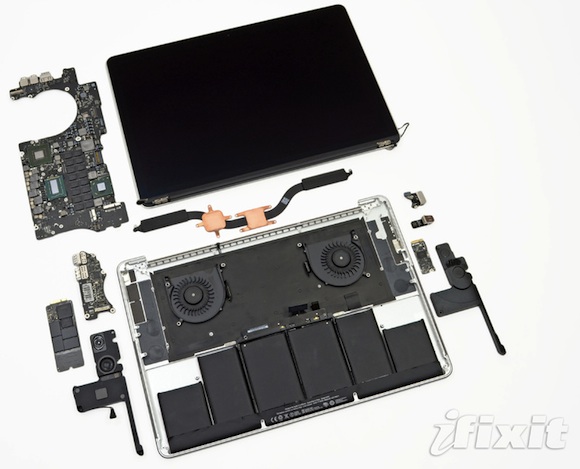 Apple of course showed off a fair bit of the machines internals during the keynote in order to promote all of the innovations included inside, but iFixit's teardown still provides an interesting hands-on look at the internals.

Unsurprisingly, the Retina MacBook Pro is not designed to be user-accessible, with the slim form factor requiring a number of proprietary components that are designed and assembled for maximum space efficiency rather than upgradeability and repairability. This has resulted in iFixit dubbing the machine "the least repairable laptop we've taken apart".

Taking a number of cues from the MacBook Air, the new MacBook Pro uses RAM soldered directly onto the logic board, as well as custom solid-state drives that include a new connector incompatible with existing third-party drives on the market.

Front of Retina MacBook Pro logic board with CPU (orange), NVIDIA graphics (red), and RAM (green)​
Apple has even taken to gluing the large battery into the body of the Retina MacBook Pro, with iFixit ultimately giving up on trying to remove it for fear of puncturing a battery cell. The glued-in battery pack also covers the trackpad cable, making it nearly inaccessible and susceptible to damage if users attempt to remove the battery.

Otherwise, the internals of the Retina MacBook Pro are fairly straightforward, with a large and densely-packed logic board with left-side ports integrated, a separate I/O board for the right-side ports, the asymmetric fan touted by Apple, and custom speaker assemblies.

If AppleCare wasn't justifiable before, it is now.
Comment

TimUSCA said:
If AppleCare wasn't justifiable before, it is now.
Click to expand...

I'm not happy with them moving everything to proprietary.

So if you have any battery problems they essentially have to replace the entire machine?
Comment

Well i guess no MBP retina for me then
Non removable ram and ssd sucks ass, absurd prices for memory/ssd upgrade in the online applestore
Comment
X

It's a give and take. If you want newer, slimmer, lighter form factors, the manufacturer needs to break away from the designs we've been seeing the last 10 years. I'm all for it, I quit fiddling with the physical aspects of computers a long time ago.
Comment

I would have at least liked the ram and 'ssd' to be upgradable. Those are the only things I upgrade anyway. As the previous poster noted, it sure makes Applecare more justifiable.
Reactions: Jynto
Comment

Well yea. At some point if you want all that in a small package, repairability will diminish.
Comment

Being members to a tech blog like we all are, I think we forget there are a lot of people who have no desire to open up their machine to tinker with it, and will be more than satisfied with what comes in the box.
Comment

Pentad said:
I'm not happy with them moving everything to proprietary.
Click to expand...

Not making excuses for apple, but is that all surprising. They were less then pleased when the people rolled out SSD upgrades to the MBA. So I'm sure they redesigned them in a way that will prevent someone else from doing the same (at least legally)
Comment
S

Expected really. You just have to think ahead about your RAM before you purchase. Good to see SSD options will likely be available in the future though.
Comment
M

Aw, I figured as much when seeing how thin it was. I'm curious as to how Apple will be replacing components for users who have defective/damaged machines.
Comment

PBP said:
Well i guess no MBP retina for me then
Non removable ram and ssd sucks ass, absurd prices for memory/ssd upgrade in the online applestore
Click to expand...

Then buy something that isn't so tightly designed that fumbling around in it would cause a problem. There, nice and easy.
Reactions: Jynto
Comment
G

I know I am shocked. Just shocked. I will definitely leave Apple now to find something much bigger and heavier that I can take apart with my walmart screw drivers.

Or I could just enjoy using a lighter machine with a beautiful display.
Reactions: Jynto
Comment

Was hoping the SSD could be upgraded.

This kinda sucks, means one should buy the 512 SSD for futureproofing.
Comment

Pentad said:
I'm not happy with them moving everything to proprietary.
Click to expand...

You can either have something small, or something proprietary. Not both.

Apple chose that to build custom parts so that they used as little space as possible, and were the shape and size to fit inside their laptops. Using proprietary parts, you have to use the size and shape that the third party manufacturers make. You're stuck with someone else telling you how small you can make a laptop. Apple now controls their own designs.

I'd rather have a design which is smaller, lighter, has more battery power that I USE EVERY DAY, instead of make it heavier, bigger and have less batteries for the one day out of 5 years that makes repairing it easier.
Reactions: Jynto
Comment

Isn't this always the cycle with Apple? new model has proprietary parts and not user servicable, then eventually Apple modifies it so you an add ram yourself and hard drives. Apple did with with the Mini and prior Macbook Pros too

So it's not the service for repair apple defenders, it's the fact we cant add ram and an aftermarket hard drive.
Comment
S

In this case it's "super thin, long battery life, & user-serviceable"

Apple picked their favorite 2 and they're the exact choices anyone could have predicted they'd make.
Comment
T

DaveN said:
I would have at least liked the ram and 'ssd' to be upgradable. Those are the only things I upgrade anyway. As the previous poster noted, it sure makes Applecare more justifiable.
Click to expand...

The SSD is upgradable... OWC offers their own SSD modules, and they are working on new ones for the Retina MBPs.
Comment
S

The only thing I hate about this is the battery. If the battery dies you can't replace it yourself.
Comment
P

Isn't that flash storage, and not a sdd which is built in? Or is both the same?
Comment

maflynn said:
Not making excuses for apple, but is that all surprising. They were less then pleased when the people rolled out SSD upgrades to the MBA. So I'm sure they redesigned them in a way that will prevent someone else from doing the same (at least legally)
Click to expand...