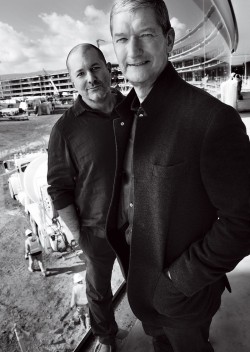 Apple executives Tim Cook and Jony Ive sat down with Vogue this week to discuss a range of design-oriented topics, from the company's spaceship-shaped second campus to the Apple Watch.

On Apple's second campus, which is under development in Cupertino, Tim Cook shared some details on the giant pile of dirt that's been building up in the center of the site as construction has progressed. According to Cook, none of that dirt will be removed, as Apple plans to use it all for the landscaping that will support more than 7,000 trees. "Hard to know which is more beautiful, the building or that pile of dirt," he told Vogue.

When Steve Jobs envisioned the second Apple camps, he pictured large swathes of greenery, which have been included in campus plans since the idea was first pitched to the Cupertino City council in 2011. Apple is planning on 80 percent green space, with a central garden that offers outdoor dining areas and more than 300 species of trees, including fruit tree orchards that are a throwback to Steve Jobs' childhood in Northern California.

Apple's design partner for the campus, Norman Foster, was on hand to give some color on the building's iconic curved glass windows, which span nearly four miles. "The sheets of glass are so long, so clear, that you don't feel that there is a wall between you and the landscape," Foster said.

Vogue also spoke to Jony Ive about the Apple Watch, his position as co-chair for the upcoming Met Gala Exhibition, "Manus x Machina," and Apple's growing connection to the world of fashion. According to Ive, technology has reached a point where Apple can achieve "the dream of the company," making technology personal. "So personal that you can wear it," Ive said, going on to highlight the ever evolving modernization of fashion.

"Both the hand and the machine can produce things with exquisite care or with no care at all," says Ive. "But it's important to remember that what was seen at one time as the most sophisticated technology eventually becomes tradition. There was a time when even the metal needle would have been seen as shocking and profoundly new."
Click to expand...

Tim Cook and Jony Ive's full interview, which includes additional information on the Apple Campus, the Apple Watch, its partnership with Hermès, and comments from designer Tom Ford on the relationship between Apple devices and fashion, can be read over at Vogue.

Apple Watch 2.. maybe round? Could you get this done Jony?!

Also, any clue when the 2nd gen will be sold?
With my withings not working, each passing day am thinking of getting one.
Reactions: John Mcgregor and winston1236

That photo looks like they're about to drop some sick beats.
Reactions: MaximizedAction, djang0, deivydas and 29 others

It puts me in mind of Fort Minor, just a little bit.
Reactions: blakethebeast10 and yaxomoxay

Apple needs a new defining innovative product. I don't see a watch being it. My friend bought one for his wife and after two months it sits in a drawer. That's the only one I've seen in public. Guess aI don't hang with the fashion crowd.
Reactions: AleXXXa, Benjamin Frost, motulist and 1 other person

Judging from that picture, looks like Ive and Cook are about to release the hottest mixtape of 2016.

On second thought, do that. Apple Music exclusive. That'll convince me to come back
Reactions: dan110, blakethebeast10 and Mr. Donahue

Oblivious.Robot said:
Apple Watch 2.. maybe round? Could you get this done Jony?!
Click to expand...

Although I think round (smart-)watches look far better than square ones, it's hard to make apps work well with a round screen.

They look like my Dad trying to be "cool."
Reactions: CarpalMac, AleXXXa, dan110 and 10 others
X

Tim: Jony, got any ideas?
Jony: Na, not really.
Reactions: macs4nw, harveyburger54, AleXXXa and 13 others

MacsRgr8 said:
Although I think round (smart-)watches look far better than square ones, it's hard to make apps work well with a round screen.
Click to expand...

I absolutely understand, and even agree to it.
But perhaps just a choice would be nice, no? It might even take some innovation in that regards to just make it work!

I have no doubt that someday it will happen, just wishing it to be sooner as I want an Apple Watch!

These guys seriously think smartwatches are a hot thing? LOL, oh man. No wonder OS X has been on such a nose dive when it's taken the backseat. My god.
Reactions: Vanilla35, Ulenspiegel and SusanK
S

Crosscreek said:
Apple needs a new defining innovative product. I don't see a watch being it. My friend bought one for his wife and after two months it sits in a drawer. That's the only one I've seen in public. Guess aI don't hang with the fashion crowd.
Click to expand...

Agreed. For me it's the shackling factor: A device on my wrist dependent on the phone in my pocket, and both dependent on my bank account.
Reactions: dan110, robbyx, Crosscreek and 1 other person

Apple used to set the fashion. Now. It follows it.

So then to summarise Cook's Broth: SOS (Style Over Substance)

Still. If you can get by treading water for three years and nobody noticing - then why wouldn't you?.

More power to his elbow. Or in this case ....wrist.
Reactions: AleXXXa, Soccertess and cableguy84

Great, round office buildings and watches. Got any new computers? MPs? Minis? Got a dying Xserve file server over here; don't want to have to go to the Dark Side to maintain my data center ... Hello?

Sorry to be snarky. Passed "a bit nervous" three months ago.
Reactions: MaximizedAction, Vanilla35, Benjamin Frost and 1 other person
R

Reactions: MaximizedAction, nicho, Vanilla35 and 3 others

"Both the hand and the machine can produce things with exquisite care or with no care at all,"

The mouth can chew the gum, or not chew at all. Did I say anything really? Ha
Reactions: PizzaBoxStyle, Apple Human, japanime and 3 others
M

Articles like this make me wonder a bit where Apple would be if Steve hadn't died yet.

What would he have done, what direction he would've taken the company, what Apple products would look like now...

Alas, we'll never know. Perhaps Steve took Apple products to maturity, just like cars and guitars. Innovation will be small and iterative in nature. The fundamentals remain the same.

Here's to hoping for a new kid (from Apple or otherwise) that changes the game like Steve did, though.

I don't like how Apple is taking Steve's legacy and shooting it in the face, but I guess that was Steve's last mistake: "Don't stop to consider what I would do."

Damn it, Steve. You shouldn't have said that.

Rant over and out.
Reactions: MaximizedAction, dan110, Apple Human and 6 others
B

No backdoor for the FBI to come in with warrants right?
Reactions: moetownslick, BruceEBonus and pat500000

It must be a unique experience to be at the center of a multi-hundred billion dollar operation. This is their playground.

It strikes me as odd that people whine that Apple has not released a revolutionary product recently then complain that they don't focus enough on computers.
Reactions: colourfastt, VanZan, pianophile and 6 others

melendezest said:
Articles like this make me wonder a bit where Apple would be if Steve hadn't died yet.
Click to expand...

Probably about where it is now. But we'd be blaming Steve for everything we didn't like (the way we used to when he was alive).
Reactions: MaximizedAction, blakethebeast10, HVDynamo and 5 others

Somewhere over the rainbow.

I was imagining something a little more...

I have an apple watch and it sits in the drawer now. For me it just became to distracting with the notifications.
Also I prefer round face watches. I felt like a total dweeb wearing to be honest.
Reactions: Kobayagi, robbyx, Benjamin Frost and 2 others

Jony Ive: "Jony...the campus 2 is almost complete."
Tim Cook: "Good. Fear will keep the local cities in line."
Jony: "So...what's the purpose of having this over-sized, halo-looking, campus?"
Tim: "It's a teleporter. It will teleport us out of here....to the oblivion."
You must log in or register to reply here.
Share:
Facebook Twitter Reddit Email Share Link
Register on MacRumors! This sidebar will go away, and you'll see fewer ads.
Sign Up
Top Bottom