Tim Cook: Not Too Long From Now, You'll Wonder How You Led Your Life Without AR

Speaking at Università Degli Studi di Napoli Federico II in Naples, Italy, Apple CEO Tim Cook said that not too long from today, people will wonder how they led a life without augmented reality, stressing the "profound" impact it will have on the not so distant future. 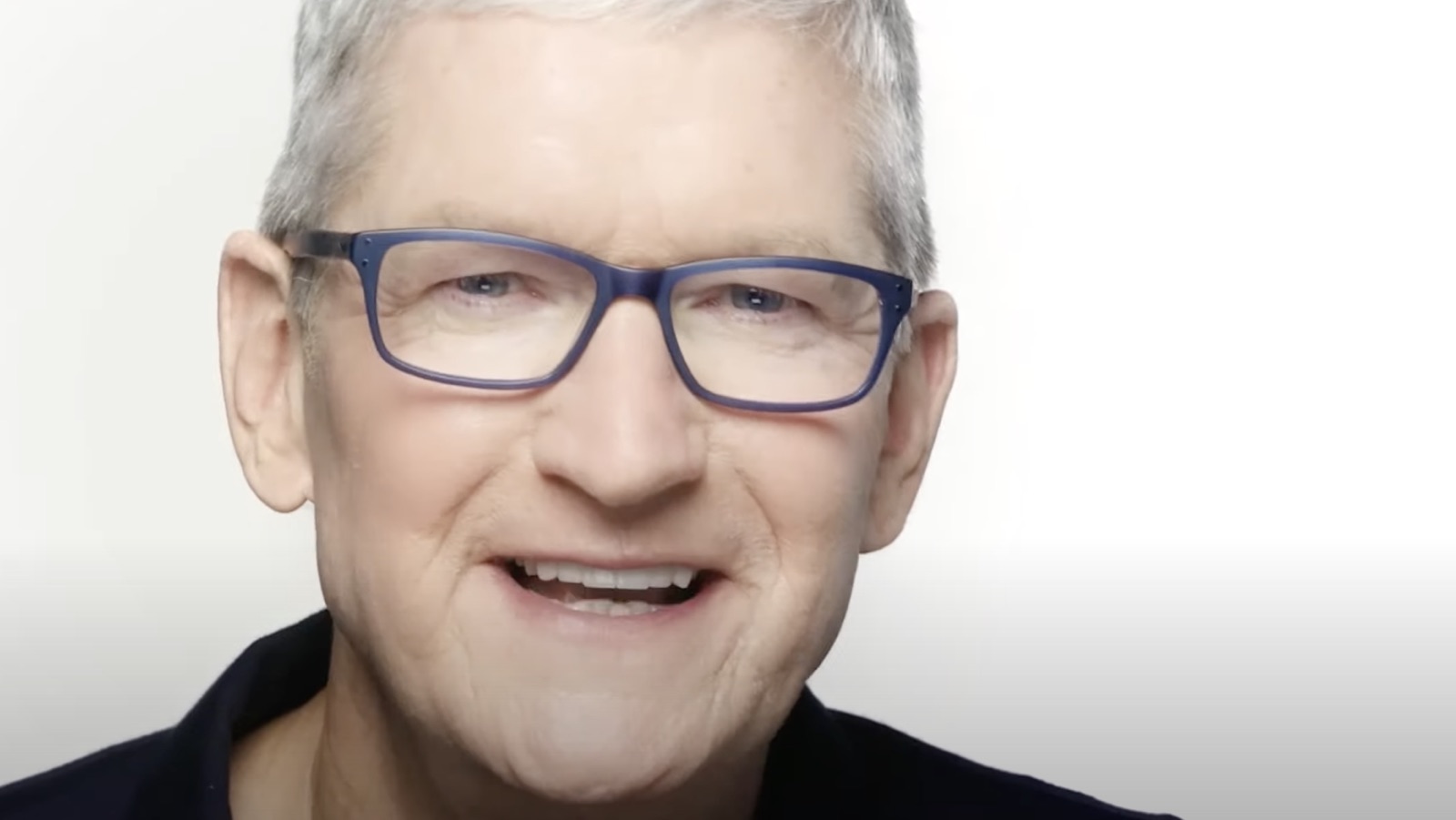 At the university, Cook was awarded an Honorary Degree in Innovation and International Management and also sat down for a Q&A session with students. Responding to a question from a student on what future technologies excite him the most, Cook pointed to artificial intelligence, calling it a "fundamental, horizontal technology that will touch everything in our lives," ranging from innovations in the Apple Watch to "many other things" Apple is working on.

Cook, more importantly, stressed his excitement for augmented reality. Cook suggested that augmented reality's impact on the world will be as profound as the internet itself, saying people will wonder how they led a life without it. As he was speaking on augmented reality, the live stream of the Q&A session abruptly cut, so Cook's full comment on the subject is not publicly known.

I'm super excited about augmented reality. Because I think that we've had a great conversation here today, but if we could augment that with something from the virtual world, it would have arguably been even better. So I think that if you, and this will happen clearly not too long from now, if you look back at a point in time, you know, zoom out to the future and look back, you'll wonder how you led your life without augmented reality. Just like today, we wonder, how did people like me grow up without the internet. And so I think it could be that profound, and it's not going to be profound overnight...
Click to expand...

Cook has in the past expressed his personal excitement for augmented reality and has hinted that Apple is working on AR/VR products. The company's first AR/VR product, a high-end headset rumored to be called "Reality Pro," is expected to be announced as soon as January. The headset has been in development for several years and will be Apple's first major new product since the "One more thing" introduction of the Apple Watch in 2014.

"Reality Pro" is rumored to feature a lightweight design, two 4K micro-OLED displays, 15 optical modules, two main processors, Wi-Fi 6E connectivity, eye tracking, and more. The headset will run the realityOS operating system, which was seemingly confirmed by App Store logs. The device is expected to cost somewhere around $3,000, with a more affordable option reportedly in the works.

Article Link: Tim Cook: Not Too Long From Now, You'll Wonder How You Led Your Life Without AR

Reactions: Wish You Were Here, MajorFubar, rezwits and 8 others

I already have to use electronic devices enough as it is!
Reactions: SemAms, Z-4195, Uofmtiger and 71 others

Not at $3k I won't.
Reactions: milkrocket, dogstar, iLLUMI and 51 others

Highly doubt it…I’m wishing we could go back to not being connected 24/7 and go back to dumb phones.
Reactions: SemAms, oreganoinferno, redfirebird08 and 89 others

Of course! Mr. Tim Cook seems very confident. But the $3000.00 price is way too steep. This AR/VR might be the last product we will see before Tim Cook retires.
Reactions: iLLUMI, _Spinn_, DarkCole and 20 others

The man does know how to get me excited about future stuff. I believe him.
Reactions: iLLUMI, AppleFan1998, 00sjsl and 8 others

No thanks. While I do find AR interesting, the older I get the less excited I am about adding more technology to my life. If I was a kid I'd be all over this, as an adult, no thank you.
Reactions: SemAms, oreganoinferno, Uofmtiger and 49 others

Absolutely frightening photo. Time for some young blood to take over. Maybe Josh D'amaro from Disney.
Reactions: Smooch, jr5x, Rocco Paris and 17 others

I might be in the minority, but I have no interest in AR. Sorry Tim.
Reactions: oreganoinferno, Uofmtiger, milkrocket and 34 others

So people will be walking around reading information from AR glasses instead of looking down at a phone screen, that will be the revolution.
Reactions: maxoakland, eifelbube, MarcK73 and 8 others
N

I agree with him. AR is much different from VR. Once Apple has glasses (or contacts) like what Tim is wearing in the photo, AR has the opportunity to be life-changing. Easier navigation, built-in teleprompters, ability to see overlays during technical work (surgeries, mechanical work on products), and much more.
Reactions: rmariboe, iLLUMI, Prpolo and 12 others

The use-case I'm imagining for this has me seriously pumped - though I have zero reason to believe this will be a reality.

I'm thinking this will be a content consumption device, but also a work device.

Imagine sitting at a desk that has a mouse and keyboard, but no monitor. You put on your Apple headset, and an augmented version of MacOS is displayed infront of your eyes. The 'monitor(s)' you would use are projected by the device, while you still see the room you're in, and the desk you're sitting at.

This would allow you to have as many screens as you like, at whatever sizes you like, while arranging and manipulating them as you see fit (with a mouse, as we do now, or maybe with your hands). Alternatively, there may not be any 'screens' at all, but you simply move windows/apps around, or snap them to fixed locations; there are many possibilities.

Being able to see the world around you through the device would be key to this working - think AR, rather than VR. Information is projected into your world, as you can look down at your keybord for typing, or grab a pen and paper to jot down a note, or reach for your cup of coffee. I don't think a fully virtual world would be ideal for practical work.

With the way AR has been demonstrated in recent years, I don't think it's a stretch to think these virtual screens could be fixed to a certain position in the room - distance from you, as well as location relative to you as you move around.

Not only would this system allow for nearly infinite ways of organizing and displaying your work, but it would be familiar enough so as to not scare off regular people who aren't tech enthusiasts. Granted, there will be significant push-back from those who think they will look silly, but once they get over that, and look at this as being akin to sitting at your desk in front of three giant monitors, they can simply work within MacOS as they normally would - only with more freedom.

I don't think this is a novelty. I think this has the potential to revolutionise how we work day-to-day.
Reactions: Radiuwel, rmariboe, 2fifty6 and 19 others
C

No thanks, AR/VR as pushed by the industry is yet-another solution looking for a problem.
Reactions: iLLUMI, Biro, peterdev and 12 others
U

stiligFox said:
No thank you!

I already have to use electronic devices enough as it is!
Click to expand...

I kind of feel that AR glasses are the next "form factor", could be difficult to avoid.
Reactions: rmariboe, Curiousdump, maxoakland and 7 others

I don't think so Tim noting my lifetime
Reactions: maxoakland, Brian Greenstone, TheYayAreaLiving 🎗 and 2 others

They ran out of ideas on how to milk more $$$ in real world so they create AR where silly people spend $$$ for virtual stuff to satisfy their ego. Time to protect our kids from this insanity.
Reactions: Biro, maxoakland, Digitalweddings and 7 others

Timmy sure is banking it all on a, in my eyes, gimmicky technology and claiming it will revolutionize how we live our lives like the iPhone.

Sorry, but I couldn't care less about AR nor do I see it being life-changing like Tim claims.
Reactions: maxoakland, Leon Ze Professional, George Dawes and 5 others
S

I still lead my life without any Apple products and it is unlikely that that will change any time soon. Augmented reality will be misused by the big companies to inject ads into real life. Who would want that?
Reactions: Biro, maxoakland, The WOPR and 3 others
C

Yikes. I'm more worried about your fixation on ageism.

Yes, I see that he's looking older, too. But he's just the wise old owl at the top of a tree filled with young blood.
Reactions: iLLUMI, RuralJuror, 00sjsl and 5 others

I'm in. It seems possibly stupid and way too expensive, but I'm in.
Reactions: rmariboe, Curiousdump, weirdsmith and 2 others

Great pic, thanks for the new wallpaper MacRumors!
Reactions: Lioness~, Curiousdump, rezwits and 7 others

I'm sure he's right...Though, this will be his ultimate test as a 'visionary' in my opinion. Most items after Jobs death have been derivative (or natural industry moves - like going into smart watches).

Personally, I've been doing less screen time on purpose (only apps that show me notifications are Messages & phone) and just use my Apple Watch.
Reactions: TracesOfArsenic, decypher44, DelayedGratificationGene and 3 others