Apple CEO Tim Cook appeared on the "The Late Show with Stephen Colbert" tonight, with the interview covering a number of topics including the iPhone 6s, the possibility of an Apple Car, and Cook's and Apple's efforts in social responsibility.

During the portion of his monologue highlighting the show's guests, Colbert poked fun at Apple with a couple of jokes, initially announcing Cook as "Cello Apple Time Cook" thanks to autocorrect and joking that the interview would be great but that Cook would release a cooler updated version of it in three months. 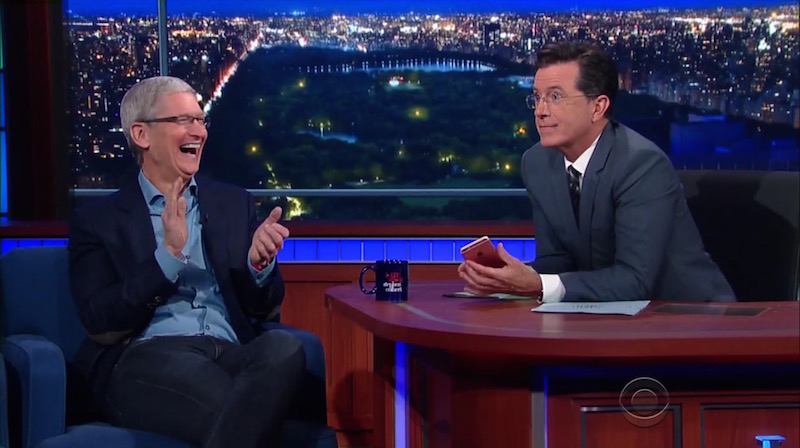 The interview kicked off with Colbert showing off a rose gold iPhone 6s before proceeding to ask Cook about the device, leading with making sure the charger hasn't changed. Colbert and Cook then discussed and showed off 3D Touch and Live Photos, with Colbert quipping regarding 3D Touch "If I hang up on someone hard enough, will it actually hit them on the other side?"

Addressing comments from Uber CEO Travis Kalanick during an interview on The Late Show last week about Apple working on a car, Cook brushed off the question with a variation of his standard comment: "We look at a number of things along the way, and we decide to really put our energies on a few of those," with Colbert making sure to record the response on his iPhone 6s.

Its good to see Apple open up a little. I am sure the show was well scripted and somewhat vetted before Tim was in the hot seat, but it does seem Apple is being a little more open compared to the Steve Jobs era. Good to see the focus on charity and leaving the world a better place (and not simply because of the changes their products have made).
Reactions: Apple Human, its93rc, StoneyG and 5 others
Comment
0

Is there anyway I can watch this now?
Reactions: darkknight14
Comment
U

I don't like him either. I'm more of a Fallon viewer to be honest.

It was nice of him to host TC though.
Reactions: Aloft085
Comment

Colbert is funny. Cook is a good sport to go on the show.

I've been impressed by the show so far by the guests that have been on. Not just brainless movie stars but a good mix of newsmakers, entertainers, etc.

Lol, I asked Siri what to ask Tim Cook, and this is what I got: 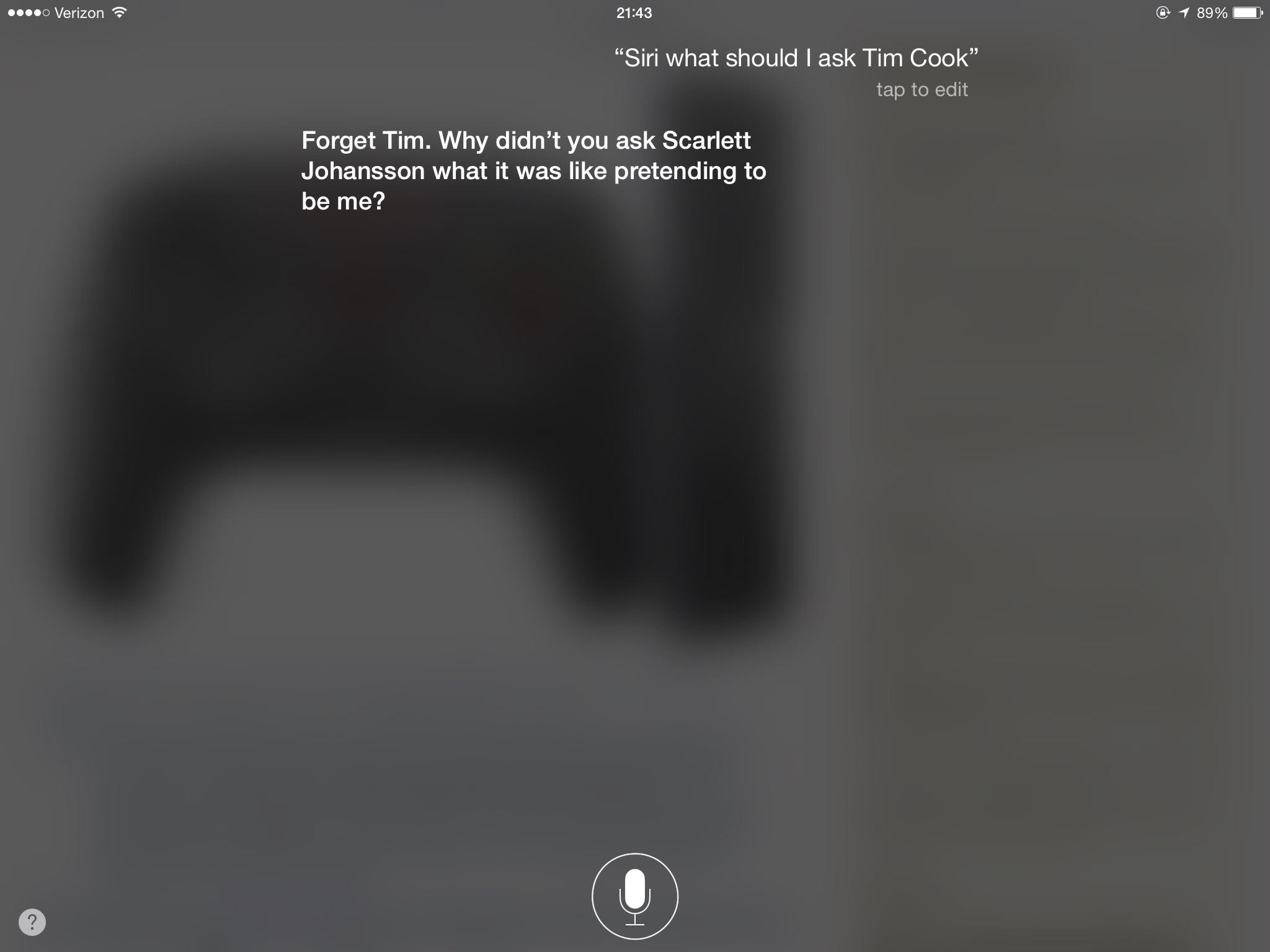 would have loved to hear about the 2012 Surface RT comparisons during a time of stagnant tablet sales - but i know its not that kind of show. or message board... or reality... (FML)
Comment
C

teslo said:
would have loved to hear about the 2012 Surface RT comparisons during a time of stagnant tablet sales - but i know its not that kind of show. or message board... or reality... (FML)
Click to expand...

Did it run iOS? Because that's really the only comparison that matters to me.
Comment

zephonic said:
Lol, I asked Siri what to ask Tim Cook, and this is what I got:
View attachment 581835
Click to expand...

lol, wtf? I love what they do with Siri
Reactions: DFierce, haruhiko and Jstuts5797
Comment
J

Steve Jobs would have never gone on the show
Reactions: Apple Human, the-oz-man, AleXXXa and 10 others
Comment

Cosmoknot said:
Did it run iOS? Because that's really the only comparison that matters to me.
Click to expand...

nope - it didn't run much. hence the comparisons to a 2015 released 'Pro" tablet.

edit: i'm about to vote up this thread's troll for being so unimaginably effective.
Comment

I would ask Tim Cook 'who is bringing the innovative and philosophical ideas to Apple since Steve Jobs passed away?'
Reactions: Apple Human, swingerofbirch, Beeplance and 2 others
Comment
T

Thanks for this. I was looking all over for it just now.

This was a very nice interview. Tim is loosening up.
Reactions: Speedman100 and Ghost31
Comment
A

Tim absolutely nailed it, and Colbert was his most relaxed he's been since the show started. Bravo! Good day for Apple, and right ahead of a big release tomorrow!
Reactions: Apple Human, imola.zhp, satcomer and 4 others
Comment

naeS1Sean said:
lol, wtf? I love what they do with Siri
Click to expand...

Wish I could say the same - I'm a 27 year Mac user, a former Apple employee, and I'll take Google Now over Siri any day of the week. Outside the US it's next to useless, and the voice recognition on non US accents leaves an awful lot to be desired. Google nails it every single time.
Reactions: iamPro, 69Mustang, AdiQue and 6 others
Comment

themongooseman said:
Wish I could say the same - I'm a 27 year Mac user, a former Apple employee, and I'll take Google Now over Siri any day of the week. Outside the US it's next to useless, and the voice recognition on non US accents leaves an awful lot to be desired. Google nails it every single time.
Click to expand...

I don't use Google Now much, mostly in Gmaps on my iPhone, but I agree it seems more accurate. But I speak English with a foreign accent and Siri gets me most of the time.

However, I think naeS1Sean was referring to those "Easter Egg" jokes.
Last edited: Sep 15, 2015
Comment

jdillings said:
Steve Jobs would have never gone on the show
Click to expand...

Probably not, but Tim's a different person in a very different position. He has to keep Apple "cool". Jobs took Apple very seriously and in essence cared less about entertainment TV. He did all the marketing PR he needed to during a keynote.
Reactions: ErikGrim and orbital~debris
Comment

It's interesting that Colbert did not wear his Watch all last week, opting instead for a traditional round wristwatch, but starting yesterday he did. Did he do it for Tim? Will he continue to wear it from now on, or is he going to switch up his watch every week? Or, did he just get his Watch over the weekend? Seems like Colbert would have gotten his straight from Apple before it even went on sale to the public.
Reactions: ErikGrim and orbital~debris
Comment
X

Were you fired or did you quit Apple voluntarily??
Reactions: Solomani, CB1234 and Enygmatic
Comment

What I keep thinking is, they probably should have sent Craig Federighi instead. Sure, he is not the CEO, but he has a lot of charisma. Tim isn't particularly bad at this, but he seems kind of tense when he's making his points. He isn't messing up anything, but it seems like he prepared for this word by word, which seems like he's lacking some passion.
Reactions: Apple Human, mrgraff, amirite and 2 others
Comment
C