Time Warner Cable iPad app prototype discussion - Part 1
(Additional videos: Part 2, Part 3, Part 4)​
The Associated Press reports that cable and Internet giant Time Warner will release a new iPad application tomorrow morning that will allow subscribers to the company's services to watch live television on their tablet devices. The app is said to initially support 30 basic cable channels, and access is limited to the customer's home Wi-Fi network.The app will be free to download on Tuesday morning, but it will only work for people who subscribe to both video and Internet service from the New York-based cable company. Even then, it only works in the home, when the iPad is connected to the company's cable modem via a Wi-Fi router.

Rob Marcus, the company's chief operating officer and president, said the app will play 30 basic cable channels in high definition to start, but that number should expand soon.

"For all intents and purposes ... this enables you to convert any room in a house into a TV room," Marcus said.On-demand content and support for using the iPad as a remote control will not be included at launch, but will be added in the future.

Time Warner Cable is the second-largest cable company in the United States, with 12.4 million customers across 28 states.

Update: The TWCable TV iPad app is now available in the App Store. 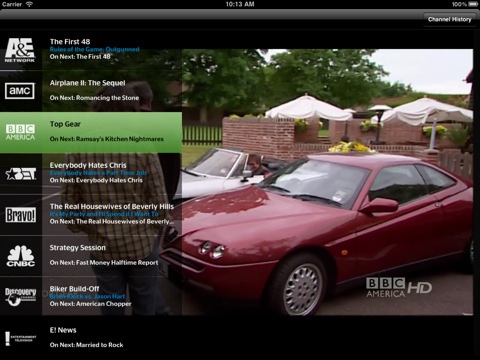 For what? Just turn on your TV.

Huzzah! Honestly excited for this! Time Warner hasn't been the best with some other hot topics, but this is pretty cool.

What a great idea apple!
R

DirecTV? Where are you? I know you have your app, but I don't care about using it as a remote control and setting my DVR. I want to watch my DVR on the road. Comcast and now Time Warner have this ability... Come on. I do not want to go back to Cable. Hated Comcast when I had it and I don't want it again....

Sorry Mr. Rockefeller, but not all of us are rich enough to have tv in our bathrooms. We have to use our ipads during our long visits!

This argument has gotten old.

When AppleTV came out every one told me to just use my XBox or PS3 which I dont have plugged into all 4 of our TVs.

And my office is reserved for computers only at the moment, not bad being able to watch TV on my iPad in my office.

Or I guess I could follow your input and go buy an additional TV since that's so easy.

Charge subscription price for iPad only and allow to work over 3G and I'll join in!
Last edited: Mar 14, 2011
L

This would apply to me but I won't be getting an iPad until next year!

Would this work on an iPhone?

I want it right now.

lllll said:
Why would I watch TV on a 7 inch or 10 inch tablet when my 55'' HDTV is just right there in the living room??

Not everyone has the luxury of going into another room to watch a different channel... This is perfect for when women want to watch "their show" while the game is on, and vice versa. plus not missing anything when going to the bathroom. This is awesome.
P

Carrying around one of my TV's while I move about the house is quite inconvenient, sir.

Your brilliant example would require me to have one heck of an extension cord as well, not to mention another cable box.
T

I have a feeling the 30 or so channels will be some of their least popular ones. Hopefully it's better than four shopping channels, PBS, Golf TV, and a variety of other terrible channels.

On a side note I really wish Time Warner would change their stupid guide. Their electronic program guide on their digital boxes are terrible.
D

Perfect for when you're dropping a deuce.

This sort of interactive functionality is what makes these soooo cool. It would be really cool if I could snag stuff off my DVR or have shows streamed to me on the iPad when I travel. Would be very cool.

Although I'm not a Time/Warner user, I'm sure this is only a glimpse of what we'll see in the near future.

lllll said:
Why would I watch TV on a 7 inch or 10 inch tablet when my 55'' HDTV is just right there in the living room??
Click to expand...

Mainly because my wife is in the den watching Bridzilla and I want to watch football and we only have one TV. I can't wait!!
B

derek1984 said:
Perfect for when you're dropping a deuce.
Click to expand...

Hahahah this was my first thought when I read this . Hopefully there won't be subscription costs associated with it. I'd happily accept a $5-10 app purchase charge. I don't have a TV in my bedroom and it'd be nice to be able to turn on a late-night infomercial to fall asleep by...especially if I can count Billy Mays' jumping a fence in my dreams.

thesiren said:
Not everyone has the luxury of going into another room to watch a different channel... This is perfect for when women want to watch "their show" while the game is on, and vice versa. plus not missing anything when going to the bathroom. This is awesome.
Click to expand...

I think some are missing the two points here.

1. iPad as a remote and controller. Cool.
2. iPad as it's own TV separate of your TV.

So I think what they are suggesting is with this App and a subscription to T/W you would be able to surf TV right from your iPad and show it on your home TV or on your iPad. If this works from anywhere.... like when I travel... that would be really awesome!

Considering how well the ipad 2 is selling no one is going to assume Apple does not know what they are doing.

Now where is that piggy bank and hammer.

thesiren said:
Not everyone has the luxury of going into another room to watch a different channel... This is perfect for when women want to watch "their show" while the game is on, and vice versa.
Click to expand...

This is exactly it. I am often in my office, no TV, and want to see the game while my wife watches a movie or some show. Likewise, I can't see the TV from the kitchen. It would be great to have the iPad on the counter while I am washing dishes or something. Or in the spare room I keep my free weights in.

DirecTV really needs this. But I have the feeling it isn't coming soon. I tried Plex, but it doesn't really do anything like this. I may have to bite the bullet and get a slingbox. Then I can watch whatever I'd like on the iPad - even remotely on someone else's WiFi.
You must log in or register to reply here.
Share:
Facebook Twitter Reddit Email Share Link
Register on MacRumors! This sidebar will go away, and you'll see fewer ads.
Sign Up
Top Bottom