Following the launch of the iPhone 6s and 6s Plus last month, it was discovered that Apple is dual sourcing the A9 chip for the new devices from both TSMC and Samsung, with the chips from the two companies measuring at slightly different sizes due to different processes used in manufacturing the chips. As users began to determine which chips were used in their devices, data began to point toward a 60/40 split in favor of TSMC, although the ratio has shifted toward 50/50 as more data has been obtained.

Benchmarks have suggested there is little if any difference in chip performance between the two A9 variants, but some recent battery testing (via Engadget) is hinting at the possibility of significantly better battery life for models with the TSMC-manufactured A9 chip.

We should caution that data points remain few at this time and controlling for variables to accurately focus the comparison only on the differences in the A9 is difficult, but these limited tests are generating significant amounts of interest in our discussion forums and elsewhere.

Perhaps the most dramatic result comes from a reddit poster who compared Samsung and TSMC versions of the iPhone 6s Plus using the battery life test included in Geekbench 3, finding the TSMC version lasting nearly two hours longer than the model with Samsung A9 chip. 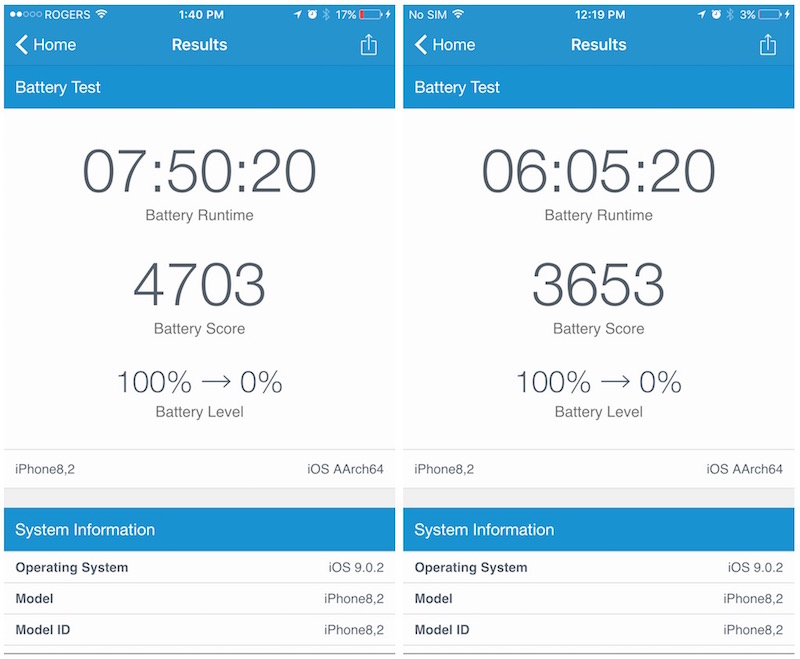 Ran this test a couple times and results were consistent. Always about a 2 hour difference in duration. Both phones were tested using the same backup, same settings. Also tried testing them as new phones and results were similar.
Click to expand...

We asked John Poole of Primate Labs, the developers of Geekbench, for any insight into the dramatic differences being observed in some cases, and he noted there have been rumors of TSMC's 16-nanometer process being "superior" to Samsung's 14-nanometer process in power consumption. He was, however, surprised by the amount of difference in observed battery life considering the various components have essentially identical performance benchmarks. Ideally, further controlled testing can be performed to offer a more accurate comparison between the variants.

...and there goes down the profit next QTR
Reactions: Deelron, Benjamin Frost, iAbc21 and 2 others
K

And it begins...
Reactions: Neodym, Benjamin Frost and Retrostarscream
T

That's quite a big difference. Glad I've got the TSMC chip
Reactions: DeutscheMark, DamoTheBrave, appledefenceforce and 4 others

I am sure people will start returning cause they got samsung chip with their 6s.
Reactions: SamBellerose, Neodym, Chatter and 4 others

At the foot of a mountain and beside a river

So much for all the whining about wanting the Samsung.
Reactions: marvz, critter13, ikenstein and 68 others

The phones with the Samsung sourced A9 also bend easier.
Reactions: marvz, DeutscheMark, ikenstein and 37 others

Remember a week ago when everyone was saying they were going to return their TSMC devices for Samsung devices?
Reactions: 123, marvz, DeutscheMark and 81 others
T

Seriously, maybe his 6s with the Samsung chip just has a bad battery. 2hrs difference seems way to obvious. I really don't think Apple is that stupid.
Reactions: sunking101, marvz, Johnny Vegas and 23 others

I can confirm that my 6S battery is way worse than my 6 of past. I do have the Samsung chip, and I really could care less. however I can kill my battery with little use in less than a day.
Reactions: mmomega, orbital~debris, Edgar Spayce and 2 others

and two weeks ago EVERYONE in the thread was hoping they'd have the Samsung one assuming it was superior cos Samsung and smaller (and based on no knowledge about anything what so ever, so blind faith)

I have no idea which chip I have, or really care - but my 6s battery is definitely much worse than my 6, which is odd as I thought iOS9 would improve things and i never even bothered to install iOS9 on the 6....
Reactions: orbital~debris, Edgar Spayce, lmjabreu and 7 others
C

This forum is going to erupt...
Reactions: AleXXXa, dsi76, t1meless1nf1n1t and 4 others
M

This is awesome. I thought mine was performing better on the battery than my 6plus. I have the 6splus with TSMC chip.

I would be pissed if I got a samsung....
Reactions: Edgar Spayce and Benjamin Frost

I have the Samsung in my 6s Plus and battery life has been phenomenal. Can anyone else confirm the battery difference or just this one guy?
Reactions: Deelron, prankster506 and Avalontor

I just hope this is not a case of one chip is better than the other. If so the ones with the worse one will feel ripped off. Also you can't ask Apple for a specific chip in your iPhone. You get what your given. Makes the situation all the more worse for the consumer who really has no idea of what they are getting before they buy.
Reactions: xSeaside, Benjamin Frost and Lukkee24

People without a background in statistics should not use the term significant so causally. With an N of 1 you can't claim a statistically significant difference. There may be real differences, but anecdotal crap like this just fuels clicks and wild irresponsible posting.
Reactions: kcamfork, marvz, astoxos and 41 others

Wait - I thought it took less current to switch smaller transistors at the same speed? Samsung chip should have better battery life...? Unless the Samsung chips are syphoning off electrons and sending them to those funky edge phones.
Reactions: MyopicPaideia, _mdavenport, motulist and 1 other person

*grabs the popcorn, sits back in his recliner with his iPhone 6*

This is going to be good. This industry provides hours of free entertainment.
Reactions: thekhan, orbital~debris, e1me5 and 17 others