I just bought an external hard drive (Silicon Power Shockproof 1T drive) as a backup drive. I want to partition half of it for Time Machine and half of it as storage. I started up Disk Utility and the partition button is grayed out. After looking through the forums, I realized I had to erase the drive in order to partition it (it came with a FAT32 file system).


The disk you inserted was not readable by this computer.​
The three buttons on the dialog box include "Initialize", "Ignore", and "Eject". When I choose "Initialize" it would do nothing. 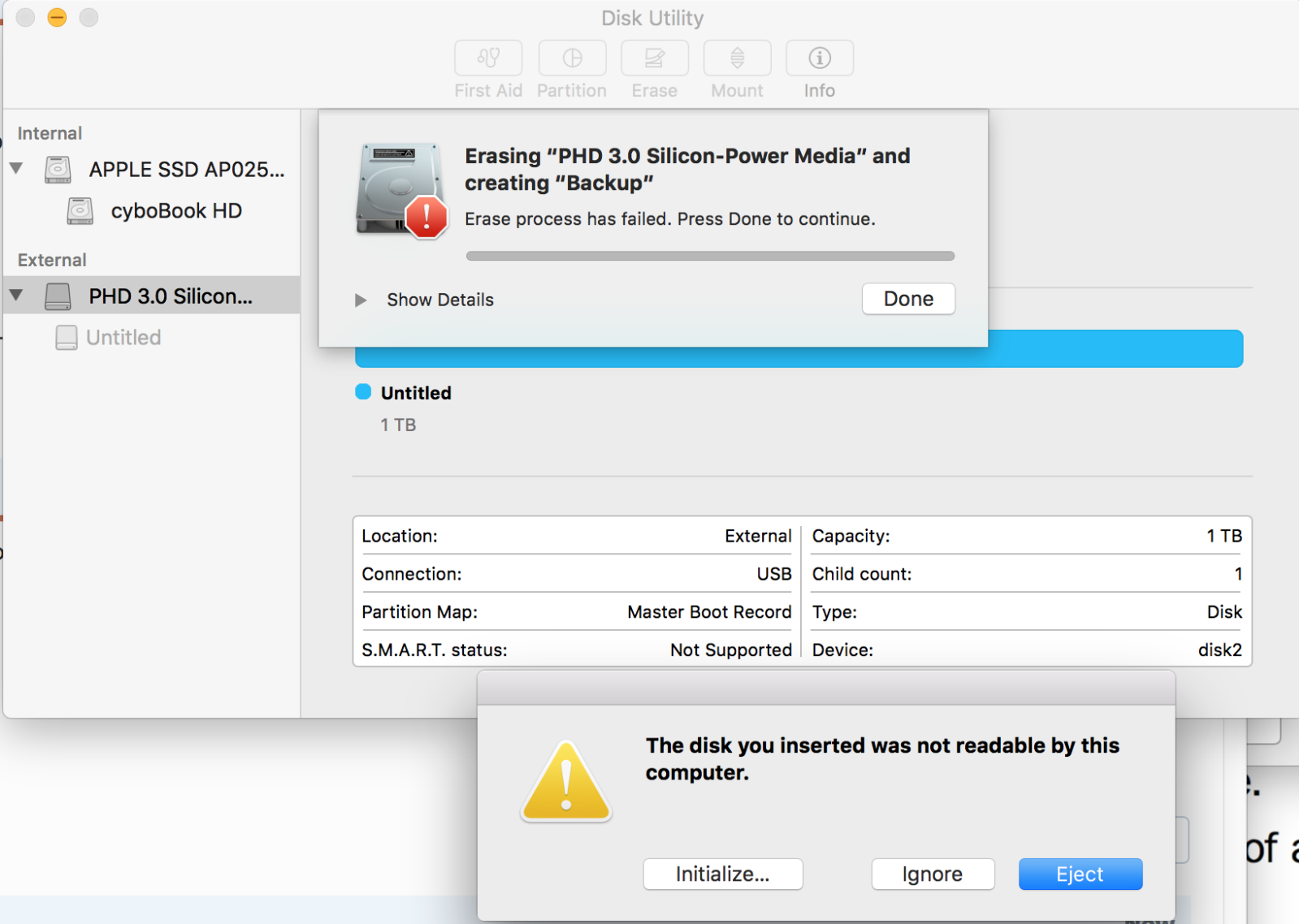 I've tried this several times. Any ideas as to what may be going on? Or is the drive just bad? (I just got it from amazon.com today and it seems to work well-I just wanted two partitions.)

Looks like it is the hard drive. If you read the reviews for it on Amazon there is this one:

Did not work
By- Con October 2, 2016
Verified Purchase
Tried to format on arrival. Format failed, drive is now unrecognizable. Not worth playing dice with a back-up drive. Also its the second SP drive I have had fail on me. I am switching companies.
Click to expand...

Other reviews have stated that the customer service is not to good. If it were me I would return the hard drive as defective and buy one from a known good company.

Could this drive have an "unremovable" partition on it with factory-installed software?

I'm thinking of what some USB flash drives used to have -- or may still come with -- such as the "U3" software on some Sandisk USB flash drives. I bought an early one, it would not completely initialize on the Mac because of the U3 partition. I actually had to take it back to where I bought it (Circuit City, remember them?), and have a tech mount the drive on a Windows PC and remove the U3 stuff that way. After that, it would initialize properly and I still use it today.

That's what I'd be looking at first.
Otherwise, just return it.

My suggestion (and it will be different from most others' here):
This time, buy a "bare" SSD (without an enclosure).
And... buy an enclosure as well.
Put the drive into it, and "build it yourself".
It will initialize as you want from the get-go.
Last edited: Jul 9, 2017

I had a similar issue with an internal SSD. Disk Utility refused to initialize it. I ended up booting windows, initialized there, and after booting into El Capitan DU played nice. So I guess it's a bug in Disk Utility.
You must log in or register to reply here.
Share:
Facebook Twitter Reddit Email Share Link
Register on MacRumors! This sidebar will go away, and you'll see fewer ads.
Sign Up
Top Bottom