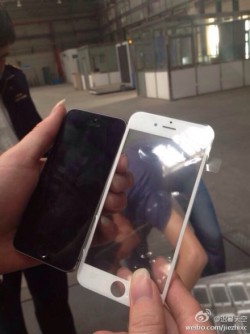 Debate among analysts over just how widespread Apple's use of sapphire displays will be in the iPhone 6 continues to rage, with The Korea Herald reporting on a new research note from NPD DisplaySearch Korea's Brian Huh putting Apple's sapphire display capacity at 45 million units for the iPhone 6 launch. With the iPhone 6 predicted to launch in an initial batch nearing 70 million units, Apple would not be able to use sapphire across the entire lineup.

"Apple's sapphire material supplier, GT Advanced Technologies, appears capable of producing the glass for around 45 million smartphones. Still, only the iPhone 6's most premium models may adopt it due to its high cost and a possible supply (set aside) for the iWatch," said Brian Huh, a senior analyst at NPD DisplaySearch Korea, at its touch conference in Seoul.

He said the 64GB version of either the 5.5-inch or 4.7-inch model is likely to adopt the glass. The iPhone 6 will reportedly come in 32GB and 64GB models.
Click to expand...

Separately, Huh also believes Apple will eventually use sapphire for its laptop displays, although manufacturing complexities and costs at those sizes would be challenging for Apple.

Huh is certainly not the first to suggest that sapphire may be limited to high-end iPhone 6 models, with previous reports from Taiwanese media and KGI Securities analyst Ming-Chi Kuo making similar claims.

A second research report from JPMorgan publicized by Taipei Times (via GforGames) claims Apple's sapphire display production may only be around 10 million units through the end of the year.

"Sapphire covers will also be restricted to high-end iPhones, possibly the 128GB [gigabyte] ones," the brokerage said in the report. [...]

"Due to various challenges related to the new cover material, we believe the production output for sapphire covers will be low," JPMorgan analysts said. "Sapphire ingot yield rates could be as low as below 50 percent for this size, and finished sapphire smartphone covers may cost as much as US$40 to US$45 versus below US$10 for finished Gorilla glass."
Click to expand...

In line with another recent report, JPMorgan also believes even the iWatch may see sapphire limited to certain models.

On the flip side, one of the staunchest advocates claiming Apple will be able to launch sapphire displays throughout the iPhone 6 lineup has been Matt Margolis, who has been digging deeply into regulatory and import filings related to the sapphire plant in Arizona being run by Apple and GT Advanced Technologies. Margolis early this year pegged Apple's sapphire display capacity in excess of 100 million units per year, and perhaps as high as 200 million units, with the facility in operation since very early this year.

Margolis reiterated those predications just last month, noting that the plant 2,500 furnaces on hand to handle larger sapphire boules that would give Apple plenty of capacity to cover all models of the iPhone 6 as well as the rumored iWatch.

DavidBlack said:
Off topic: I need a 128 GB iPhone
Click to expand...

They really only know as much as we do, so I don't care what they say, they've always had an awful track record in predicting the next iPhone
Comment
S

I love analysts, they pretty much guess the same as posters in here.
Comment
P

Can we please at least agree on a rumored feature

Please, if you claim to be an analyst, come over to MacRumors and tell us about how Apple managed to license all these sapphire production facilities and we will be flooded with sapphire enabled iDevices in the fall.

Otherwise I have to register a company and become one of the well-known sources of the "industry".
Comment
L

Seems unlikely to me - such dramatic fracturing of iPhone models (especially WITHIN the size variations) does not really fit the Apple marketing norm. Having two different size iPhone available is a huge divergence - adding different subdivisions within sizes seems like a big jump to me. Just my 2 cents.
Comment

I hope the Sapphire isn't premium, but if it is, at least make it available on both sizes Apple. I'm willing to pay for quality products, but not willing to compromise with a massive screen.
Comment

I really hope that Apple uses the Sapphire screens on all the new iPhone models not just the high-end ones. IMO Sapphire displays would be a major selling point for the iPhone 6.
Comment
B

I predict NO Sapphire on iPhones this year and NO 5.5" model either. Just like every year Apple will deliver the minimum upgrades they can get away with.
Comment

MacRumors said:
Separately, Huh also believes Apple will eventually use sapphire for its laptop displays, although manufacturing complexities and costs at those sizes would be challenging for Apple.
Click to expand...

Next they'll be predicting sapphire windows for the mothership. A sapphire laptop display makes about as much sense as a gold plated SIM card eject tool.
Comment

Okay....so one analyst says yes to all models, all sizes, and the other says, 'no, just premium'

Make up your mind.

This isn't a rumor. It's what 'analysts' think.
Their guess is about as good as mine.

MacRumors has published so many articles that contradict each other on the same topic (sapphire display) that I don't know - or have an idea of what's right.

So, who's lying and who's telling the truth?

Sapphire for laptop displays? I think Huh needs to have his head checked... that just seems like an extravagant waste of money. Laptop displays don;t have nearly the exposure or risk of scratching as phones or watches. You don't put a laptop into a bag with the screen out so it can get scratched by your keys!
Comment
B

Has anyone mentioned that they may be laminating the sapphire with graphene? I think this could be huge - more than just hard to scratch.
Comment
B

lowercaseperson said:
Seems unlikely to me - such dramatic fracturing of iPhone models (especially WITHIN the size variations) does not really fit the Apple marketing norm..
Click to expand...

to be fair I would hardly call alternative display glass (i.e. mix of standard and sapphire) a dramatic fracturing. Its in fact no more fracturing than a color variant would be since no software cares.

Now having multiple size phones is not the norm to be sure, but then again neither were the 5C and 5S combinations. Who knows at this point what the 6 landscape will look like.

My hope is that every 6/7/8 new phone gets sapphire regardless of storage class, and next year the cheap 6C could revert back to gorrilla glass or somesuch.
Comment
D

Where do I apply for a job as an analyst?

I'd love to make money from random unfounded predictions.
Comment

dont see it as a selling point. the avg. customer will be like huh and end up slapping a screen protector on it after all.

"i predict no iPhone 6 with 5.5 this fall and also sapphire saved for the 6S while iWatch will be the first and only device to adopt it in the fall"
Comment

A sapphire display would be nice, but it won't force me to pay a premium price for the premium model. I have had my iPhone 4 for almost 4 years and not a single scratch. I just take care of it.

However someone like my wife needs sapphire. She throws her iPhone 5 around like it is a frisbee, and I swear either Edward Scissorhands or Freddie Krueger is hiding out in her purse.

Analysts' estimates vary widely? 98% of them are wrong? HOW CAN THIS BE? Oh, right, because they're analysts and are worse at predicting the future than the average, uneducated person. Or monkeys throwing darts.

S stands for speed. Just like "i" stood for "Internet" in the original iMac. I don't know why you, and people like you insist on making the S stand for a bunch of other dumb ****, but it's old, tired, and it isn't clever.

eagle33199 said:
Sapphire for laptop displays? I think Huh needs to have his head checked... that just seems like an extravagant waste of money. Laptop displays don;t have nearly the exposure or risk of scratching as phones or watches. You don't put a laptop into a bag with the screen out so it can get scratched by your keys!
Click to expand...