The Unicode Consortium today released Unicode 8, the next update to the Unicode Standard that defines special characters and symbols, including emoji. Unicode 8 introduces 7,716 new characters, including six new scripts and new symbols, with letters to support languages in Africa, lowercase Cherokee symbols, and more.

Of interest to iPhone and Mac users is the emoji portion of Unicode 8, which introduces 37 new emoji and five emoji modifiers (these are the same skin tone modifiers that Apple has already adopted). These new emoji may eventually be added to Apple's Mac and iOS operating systems. 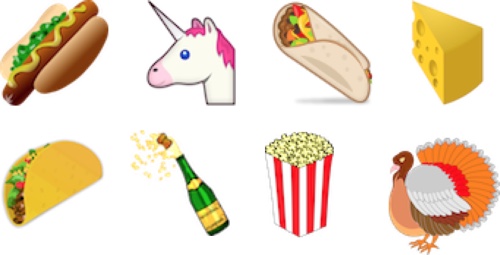 Emoji examples via Emojipedia​
​
Unicode only includes text descriptions for each of the emoji, so it's up to each individual company to create the graphics to go along with the symbols. When these emoji eventually make their way to the iPhone, they'll look different than the images above.

Ayyy lmao. I am excited about the taco. I'm not sure why it has been missing for so long!
Reactions: jjm3, The WOPR, jadAce and 2 others

For real Apple pick up the pace on Unicode Keyboards!!!
Reactions: darkknight14 and jjm3
O

Where is the whiskey glass?

People have jobs today that were impossible to even conceive of 10 years ago.
Reactions: Nermal, darkknight14, MartiNZ and 10 others

Arrr said:
Ayyy lmao. I am excited about the taco. I'm not sure why it has been missing for so long!
Click to expand...

According to my calculations Apple Should have Unicode 8 implemented by 2023. Just 8 more years until we can enjoy the taco emoji!!!

nagromme said:
People have jobs today that were impossible to even conceive of 10 years ago.
Click to expand...


People have jobs today that are impossible to conceive of, even today.
Reactions: mkeeley, darkknight14, ArtOfWarfare and 10 others

Will the unicorn come with a fur color change to be more inclusive of nonwhite unicorns? /s
Reactions: iKrivetko, Nermal, mwinget and 7 others

Once Apple picks this up, Swift programs are going to be even more interesting. 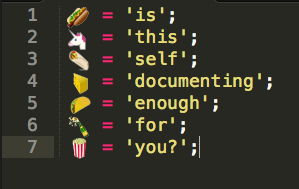 I know a picture is worth 1000 words but this is ridiculous.
Reactions: mkeeley and iAshley

Come on, bring on the "nlm"

Wow, this clears up a major cultural snafu. Here I thought the Cherokee were yelling at me all the time, but now I realize it's because the Unicode consortium didn't even include their lower case characters...
Reactions: ArtOfWarfare, MartiNZ and Mactendo
A

What's the deal with everyone wanting a taco emoji?

I would like to see a motorcycle emoji
Reactions: ArtOfWarfare

That's *just* what I'm looking for, some more garbage emojis for me to sift through whilst I try to locate the few worthwhile ones.
Reactions: mkeeley, iAshley and Mactendo
E

Can we get a vomiting or sick face yet? The doctors mask only makes sense in SARS land
Reactions: Galley

Must be a slow news day where this is the top topic. Really stupid, MR.
Reactions: mkeeley
M

ttss6 said:
Will the unicorn come with a fur color change to be more inclusive of nonwhite unicorns? /s
Click to expand...

ElRojito said:
Can we get a vomiting or sick face yet? The doctors mask only makes sense in SARS land
Click to expand...

Agreed. We need a barf emoji as a matter of some urgency. A unicorn is probably the last emoji someone should come up with.

Am I alone in exclusively using the classic yellow smileys, plus the odd turd emoji? Every single other one is naff.
Reactions: mkeeley, iAshley and Galley
You must log in or register to reply here.
Share:
Facebook Twitter Reddit Email Share Link
Register on MacRumors! This sidebar will go away, and you'll see fewer ads.
Sign Up
Top Bottom