Hi. I have a 2012 6 core mac pro. At the time I could not afford a 12 core machine. I am wondering how to go about upgrading to a 12 core. Is it as simple as buying the 12 core tray and processors and sliding it into place? Would I have to reinstall anything or would boot as normal and reflect the change?

Or do I need to buy a refurbished 12 core machine and replace the hard drives with the one from my old 6 core machine?

Thanks for all your help.

So your safest bet is to get a dual CPU tray from 2012 model and boot up.

In fact, it may be cheaper for you to buy a whole dual processor 5,1. Swap the tray, and then sell the single processor one.
Reactions: Darmok N Jalad, bsbeamer and adam9c1

I like that approach. I've been seeing very expensive prices for dual CPU trays.
Are you able to swap the CPU's yourself?
P

Is swapping the cpu tray as simple as taking it out of one and putting it in the other? I'm not very good at tech stuff.
B

Prices are a little insane for dual CPU 2010/2012 trays, even worse when buying from a reputable seller.

Was looking to replace the one that had been on lone for awhile and needed to return after a long-term project was complete. I found a decent enough deal with RAM included. Glad I made the investment before the 7,1 "delay" news. Think there's some additional price gouging right now.

Decided to keep my single CPU tray on the shelf instead of selling, just in case there's ever an issue.
[doublepost=1524087061][/doublepost]

Pedrith said:
Is swapping the cpu tray as simple as taking it out of one and putting it in the other? I'm not very good at tech stuff.
Click to expand...

Depends on the CPU you're starting with. If all stock, the answer is NO.

If you get the correct dual processor tray with all CPU and RAM installed. Then yes, the swap can be finished within 1 min with no complicated step at all.

However, depends on your current CPU option and the new tray's CPU options. Your computer not necessary will run faster. Therefore, may I know why you want the dual CPU options, use it for what?
P

I currently have a 6 core processor in a late 2012 machine.
B

Are you on a 3.33ghz 6-core currently?
What GPU are you using currently?

The better spend of your money might be SSDs (if not already using) and/or a PCIe adapter for SSD, improved GPU, and additional RAM. Unless the applications you're using can utilize dual CPU and/or additional available RAM properly (if you're also adding additional RAM with dual CPU), then the benefits may be minimal.

FCP7 was a memory hog back when I was using it daily. Did not make a tremendous difference between 6-core and 12-core at the time if I recall correctly.

Tray costs are so high that the most cost effective way to bump a MP from single to dual CPU is to buy a used dual CPU model and sell your single CPU model.

There are two side bonuses:
1) You can get the dual up and running before you sell the single.
2) No worries about board mismatches.

There is one pretty big drawback:
1) You might end up keeping both because you like them both so much. This happened to me.
Reactions: Darmok N Jalad, thornslack and adam9c1
P

I need the larger hard drives as it is also the family computer now. I know that handbrake will benefit from the 12 cores.

Pedrith said:
I know that handbrake will benefit from the 12 cores.
Click to expand...

Yes! Handbrake will 100% benefit from every single CPU core and frequency bump you can give it.
Reactions: Darmok N Jalad and bsbeamer
B

Be careful on eBay if you go that route and pay attention to the listings. Anything that claims 2009 in their listing will not work with an authentic 2012 Mac Pro. The 4,1 > 5,1 firmware flash makes the tray purchase a bit more confusing, especially if buying part pulls.

Can try to pull the 12 core (dual CPU) tray in this machine later this week to see if there are any markings. Would not be shocked if they are identical to the 2009 4,1.

I agree that your best bet is getting an entirely new Mac Pro with the dual socket configuration and sell the old. I wouldn't even swap trays, but just the storage devices. You could also keep the old as a reserve machine, as you'll be paying a hefty sum to ship a 50 lb Mac Pro.

One thing to keep in mind is that your single socket Mac Pro likely has the W3680 Xeon if it's straight from Apple. The W-series Xeons can't be used in dual socket configurations. You'll need to use the X-series. The X5680 is your equivalent, but the X5690 is the max CPU.

FCP7 by itself doesn't fully use all available cores. If you have plugins, however, more cores would benefit FCP7.

BTW, is there a particular reason you're still using FCP7? I'm assuming by "digitizing," you use FCP7 to ingest analog media recorded on tape? I keep FCP7 around to open archived projects, and that doesn't happen often, but for everything else a modern NLE (FCPX, Resolve) performs better than FCP7. It's a 32-bit app, and it's no longer supported beyond Sierra 10.12.6.

If you're going to upgrade your cMP, maybe also upgrade our NLE to take advantage of the upgraded Mac?
Last edited: Apr 18, 2018
P

Work is slow to upgrade anything and everything must be compatible.

Craigslist is a great place to find really nice deals on used Mac Pros. I recently picked up an 8-core 2010 for $500. It hit the market at $800, didn't sell, and when the seller lowered to asking price to $600, I offered $500 and made the deal. It now houses 2 hex CPUs, an RX460, 2 spinning backup drives and a bunch of SSDs and is running great. I sold the hex machine it replaces, but still have another hex MP in the house as emergency backup for my studio.

The CPU swap for 2010/2012 dual-CPU Mac Pros is a piece of cake.
Reactions: ActionableMango
B

CPU tray swap is piece of cake, even for non technical. Actual CPU swap with thermal paste is not as simple for the non technical.
P

Thanks everybody for all your help.

Guess where a lot of eBay parts come from, These old Mac Pro's go to local e-cyclers the hard drives are removed and degaussed for data security and the parts are tested for functionality. But $1000.00 is a bit much since the last one I worked on was a dual X5680 with 32GB and went for $400.00 upgrade to 64GB would be $500.00. I would love to save all the old Mac pro's that come into our warehouse but there is no need to charge so much for these old workhorses. 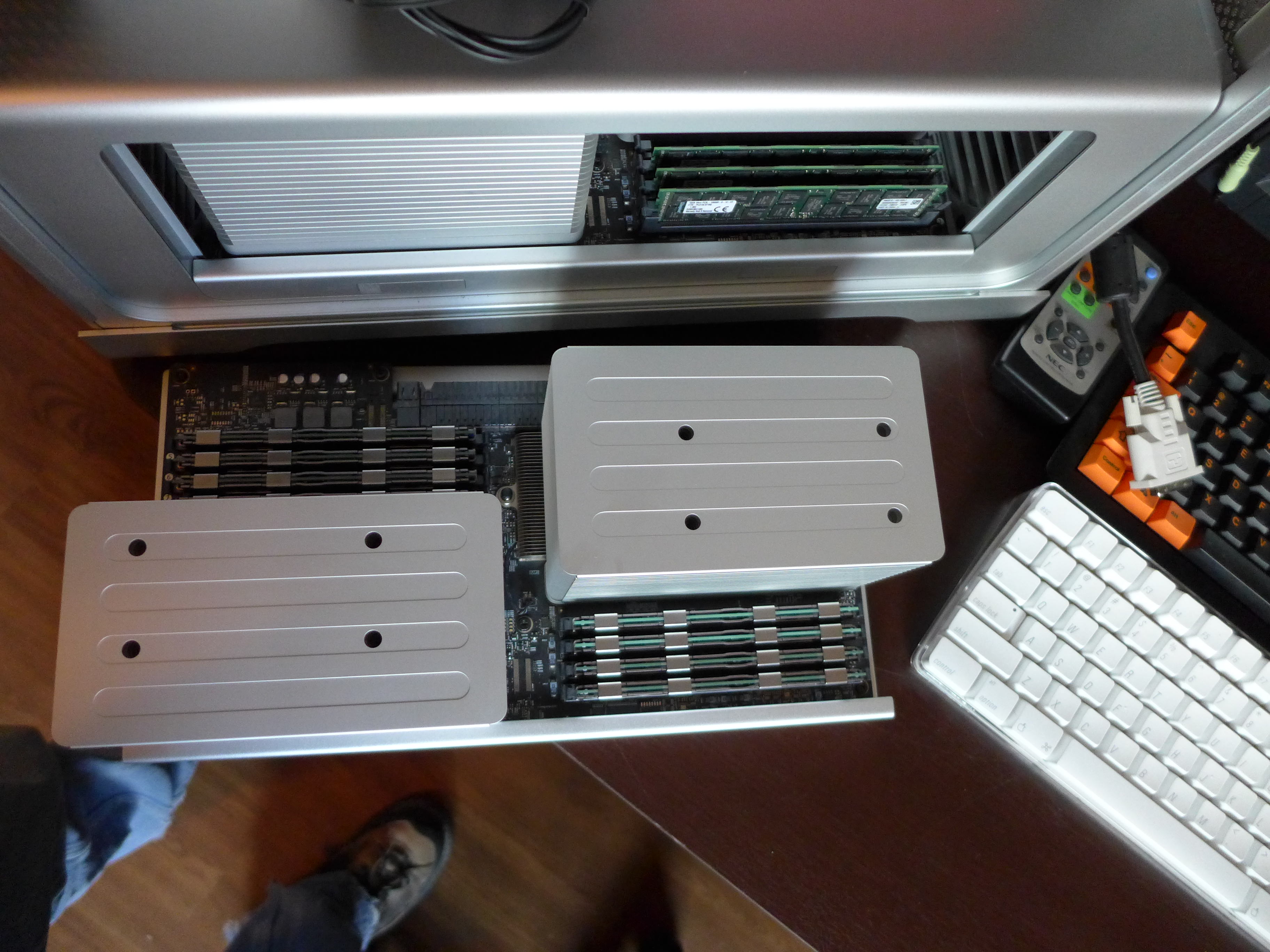 Groovy said:
Guess where a lot of eBay parts come from, These old Mac Pro's go to local e-cyclers the hard drives are removed and degaussed for data security and the parts are tested for functionality. But $1000.00 is a bit much since the last one I worked on was a dual X5680 with 32GB and went for $400.00 upgrade to 64GB would be $500.00. I would love to save all the old Mac pro's that come into our warehouse but there is no need to charge so much for these old workhorses.

Could you ship some to Europe?

It’s easy to pay too much on eBay. With time and patience, good deals can be found.
Reactions: TheStork
You must log in or register to reply here.
Share:
Facebook Twitter Reddit Email Link
Register on MacRumors! This sidebar will go away, and you'll see fewer ads.
Sign Up
Top Bottom