I just saw this ad on TV.

This gave me the CHILLS because I actually was duped into thinking it was real ... until I recognized the actress' face and heard the line ... "We will bring peace to all your nations". What is really spooky is that I was old enough to watch the original shows that I think lasted 3 seasons.

Is anyone ready for this? Anyone hoping that the script will remain solid all the way through and keep us interested like BSG has done (with its remake of a blockbuster classic - doing far better)??!!!

PS: I recall being slightly ill watching Diana swallowing that guinea pig in the pilot show form the '80s.

Yeah, the DVR is set.

I'll never forget when the woman ate the guinea pig in the original series.

lol .... man when I was 11 this show looked so cool vs Knight Rider. I look at it now (the 80's show) and I almost belly ache laughing my head off!

What's with the line "you will know love again?"
http://www.youtube.com/watch?v=WchO_HSkhl8&NR=1
Comment

I'll watch the pilot. Though it will most likely suck
Comment
H

The original was on scify today. It says it was a miniseries. When I was a kid, I remember the original. But I don't recall it being like only 6 episodes...

Was it on ABC originally? I thought it was on NBC. I wonder if they are going to bring back "Amazing Stories"! I loved that show. There were some scary ones, although I was little, so it probably wouldn't be scary now, just like the original Amityville Horror was scary back in the day, and is a joke now
Comment
B

The original "V" consisted of a couple of mini-series and a TV series.

The "new version" is basically just another of Hollyweird's silliness that will be completely different to the original, and destroy any chance of the original creator's attempt for a proper sequel to actually get made ... just as Ron Moore's version of "Battlestar Galactica" destoryed any chance of either Glen Larson's own revival or Richard Hatch's sequel getting made.
Comment

I remember the original series and am interested in seeing what the new one is like. If I recall correctly it was a mini-series that was so popular they turned it into a regular show for a few seasons.

The "guinea pig" scene was nothing compared to the birth of the "lizard baby". 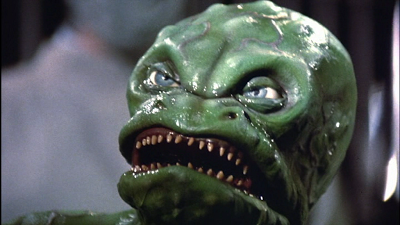 And who could forget Robert Englund. 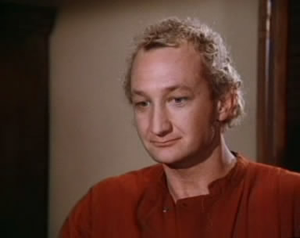 Or the extremely fashionable eyewear. Sorry Kanye, but these were popular before you got a hold of them.

I remember flashes from the original show, and I am looking forward to this one. As long as they don't screw it up, I might following all them episodes.
Comment
I

never knew it was based off an older show. just been seeing the ads for it while watching Flash Forward. I will be passing on it though as it looks extremely cheesy. The scene of her giant face plastered on the bottom of the space ship as it slowly flies over manhattan...cheesy.
Comment
B

I'll definitely watch it but I always thought the premise was dumb. These aliens are capable of building huge, light speed capable ships that traverse great distances merely so that they can eat us. They couldn't use that technology to raise their own animals to eat closer to home? Why not simply take some of our cows and start a ranch on one of their ships? I hope this new series has a few more plot twists.
Comment
I

barkomatic said:
I'll definitely watch it but I always thought the premise was dumb. These aliens are capable of building huge, light speed capable ships that traverse great distances merely so that they can eat us. They couldn't use that technology to raise their own animals to eat closer to home? Why not simply take some of our cows and start a ranch on one of their ships? I hope this new series has a few more plot twists.
Click to expand...

and if i was going to watch ...you just spoiled the surprise since I had no idea they eat people haha....
Comment

I had my wife and boys watch the original mini series yesterday (4.5 hours) and it was fun. Better then a lot of movies on SyFy. We then watched V:The final battle (where the alien baby was born) and that was really quite bad. I have the DVR set to record the new series; I like good / cheesy scifi.
Comment

barkomatic said:
I'll definitely watch it but I always thought the premise was dumb. These aliens are capable of building huge, light speed capable ships that traverse great distances merely so that they can eat us. They couldn't use that technology to raise their own animals to eat closer to home? Why not simply take some of our cows and start a ranch on one of their ships? I hope this new series has a few more plot twists.
Click to expand...

They were after water in the original V as well. Eating us was just a(n) (un)lucky coincidence. Besides, free range tastes better than farm raised.

Or maybe, just maybe, Earth IS their equivalent of a cattle ranch.
Comment
B

For those interested in the proper, original "V", the creator Kenneth Johnson has recently (re)released the novel of it and published a sequel "V: The Second Generation". He is / was trying to make this into a new movie / TV mini-series, but that idea will noe never happen. I haven't read my copy yet, but some people say it's good and others of course say it's not.

There were also a small pile of old spin-off novels, but they are difficult to get hold of these days, although they do turn up on auction websites and secondhand book stores from time to time.


For those wanting a sensible "remake" of "V" where they had enough decency to also rename it along with making their own changes, there's the "Independence Day" movie.
Comment

I thought Kolchak: The Night Stalker was highly entertaining, but that show was trying to be goofy.

Whereas V attempted to be straightforward and earnest, and to me, failed. Early on they had one aspect I thought was interesting (IIRC): a sort of alien acceptance movement which was scary because it kind of resembled a Hitler Youth type of organization. Alas, I don't recall that they went anywhere with that idea.

I'll watch some out of curiosity, but frankly I'm more amped up for The Prisoner.

Mousse said:
They were after water in the original V as well. Eating us was just a(n) (un)lucky coincidence. Besides, free range tastes better than farm raised.

Or maybe, just maybe, Earth IS their equivalent of a cattle ranch.
Click to expand...

Oh that's right--they wanted the water too. Also dumb. There is unlimited supplies of ice floating around in our solar system and around the galaxy. All they have to do is tow a big space ice cube back to their lizard world. In fact, I think it would much easier than entering a planet's atmosphere and pumping water to the ship. Very costly in terms of expending energy.

So, no point in showing up here to eat us and no point in obtaining our water. I hope they think of a different reason to invade. The only reason I can of is that we are intelligent enough to use as slaves in factories. We can all build alien iPhones or something.
Comment

Robert Englund - raised as a Visitor before raising hell on Nightmare hehe..

I thought the reason why they just didn't take over was for resources ... an all out war would drain them. Also I thought there was another polital angle to the Visitors ... I recall Diana always having to answer to a higher body representative that never showed up - just their secretaries from week to week. Also wasn't the visitor ships that arrived to earth not the full military compliment that they where scout ships and others like them across the universe? And that they where at war with another species elsewhere?
Comment
S

The original jumped the shark the moment it was mentioned they eat people.
Comment

Tonights the night; The freaks come out at night.

I really hope I don't wast an hour watching this ... I hope its worth the time to enjoy it.
Comment
R

Prom1 said:
What's with the line "you will know love again?"
http://www.youtube.com/watch?v=WchO_HSkhl8&NR=1
Click to expand...

Hey, that's Adria, the Ori witch. Quick, get the Sangraal and use it on her ass.
Reactions: DeepIn2U
Comment

Yeah. I'm jazed about this tonight. I can't wait!

I only vaguely remember the original as I was a wee little one.
Reactions: DeepIn2U
Comment
P

I hope Michael Ironside gets to play a role in it again!
Reactions: DeepIn2U
Comment

Yeah Michael Ironside has had a lot of roles - too many of them in B rated movies or just side supporting role. He's a tough as nails bastard - and was great with Starship Troopers. He's not too bad of an actor but he just looks like a mean bastard.

I only vaguely remember the original as I was a wee little one.
Click to expand...

Hehe. At least you didn't have nightmare issues from horror movies like I did. I had SERIOUS issues with Dr. Who - the original (old guy) and those robots "Exterminate, EXXTeerminate ... EXXXXTEEEERMIIIIINAAAATE!" - I still get chills just thinking about it.

I KNEW I saw that woman somewhere before. She looks HOT in a creepy way with short hair.

Some VERY strange undertones that I didn't notice from the original show:
* Some blonde V guy speaking with Diana used to hold his hands in a V shape.
* Specific hand-shake of the Visitors amongst themselves or when aligning themselves with a sympathetic/worshiping human.
(I saw some paranoid edited homie clip about Mason's on the tube and went back digging up episodes and recalled many of them. I HATE tainting the memory of the old shows with some paranoia arch - but I did find it, well odd.)

The NEW show seems to promise a little more indepth look at the psychii of humans ... not just that the ships are hovering about 29 (original had 50) most powerful capital cities across the world, but that the BRIGHT LIGHT and the large face of Ori chiceetah speaking DOWN at Earthlings. Hmm.

- We're not the only intelligent life in the Universe and pleased to find it.
- We're far from home and need resources.
- The promise of better health (especially with H1N1 going round, and other unsolvable diseases and neurological breakdowns)
- And the lovely ... hopefully leave you in a better state than when we found you. This is like the eloquent way of insulting someone while being nice about it.

Yes I'm ready for another sci-fi show to screw with my brain hours after I've watched it > enticing me to watch more. At least until Caprica airs on January 22nd.

I cannot STAND not having something to watch during the week (SGU on Friday nights; but kids stay up and are LOUD). I'm pretty much forced having to endur Desperate Housewives, and other such chick shows - I'm loosing my mind!
Comment
T