Verizon Preparing to Launch Voice Over LTE Network in September

Verizon today announced that it is preparing to launch its voice over LTE (VoLTE) service sometime in September, reports CNET. The new service will be available nationwide on supported phones that are connected to the carrier's LTE network.

VoLTE will provide high-definition quality voice and video calls that will significantly improve the overall calling experience. Not only will customers notice an enhancement in voice call quality, they also will be able to initiate a FaceTime-like video call right from the dialer app.

Once you experience the HD quality voice, you don't want to go back," Greg Dial, executive director of mobile services for Verizon, said in a pre-briefing and demonstration of the new service with reporters. "The tight integration of the video calling feature is also significant. You can launch it right from the dialer. There's no opening a separate app."
Click to expand...

These new HD VoLTE calls will be considered voice calls and will count against a customer's available minutes. Video calls will be counted as data and will subtract from the customer's data allotment. There will be no extra charges for using this service, and it will be optional for customers. 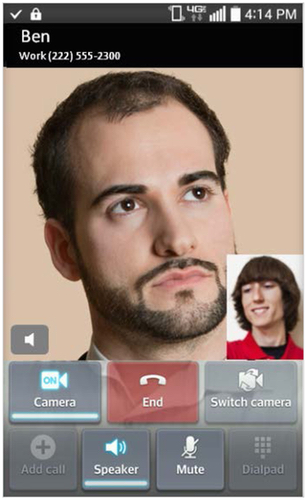 Verizon has not specified which phones will be updated to support its new calling service, but the iPhone may be included on this list. The current generation iPhone chipset supports this feature, and it can be enabled with a software update. Rumors have suggested that Apple has plans to support VoLTE with the launch of iOS 8 and the iPhone 6. Along with Verizon, AT&T and T-Mobile have announced plans to add VoLTE to their networks in the near future.

iOS 8 will also bring a WiFi calling feature, allowing customers to place higher-quality voice calls over WiFi instead of using a cellular network. T-Mobile is the first carrier to confirm that it will support Apple's WiFi calling feature when it launches this fall along with iOS 8.

If you've ever experienced a voice call over wifi, either through facetime audio or skype, you'll know how jarring it is at first being able to hear someone so clearly.

It's amazing how much we've become used to low-fidelity calls.

Cool. Only excited for the simultaneous voice & data
E

We will stick with Facetime video/audio calls thank you very much.

Jack Delgado said:
If you've ever experienced a voice call over wifi, either through facetime audio or skype, you'll know how jarring it is at first being able to hear someone so clearly.

It's amazing how much we've become used to low-fidelity calls.
Click to expand...

Agreed... It is better, and yes, I welcome it, but for me, at least, data and voice at the same time is what excites me.

Get with it Verizon. 2007 called, they want they're on-screen design back.

That's some gross-looking GUI. Please tell me that's not from present day? (Must be Android)

T-Mobile already has VoLTE across most of their LTE network.

Thankfully Verizon will charge on minutes, not data.
S

How would VOLTE work when you are on Wifi? Will it still use LTE for VOLTE if you are in a LTE area on Wifi?
L

I'm not sure if I am excited about this or indifferent. My first reaction was: "They're fixing a problem that does not exist" but I can't say that without experiencing it.

I'm a Verizon customer so anything they do to improve their network or the user experience, I'm all for it. I just hope they don't use it as an excuse to jack up my bill that much more...

If it does bring Voice + Data to the iPhone (simultaneously, of course) then that'll be the best part in my opinion!
T

ElZeus said:
Their LTE video calls will require DATA + Minutes. BAWHWHAWHWHAWHAHAHAHA We will stick with Facetime video/audio calls thank you very much.

Also, look at how well-manicured that beard is! Holy cow!

Be all you can BEARD bro!
D

Shirke said:
How would VOLTE work when you are on Wifi? Will it still use LTE for VOLTE if you are in a LTE area on Wifi?
Click to expand...

I think what they mean is that if you use Verizon's feature, you are getting dinged for data AND minutes at the same time. If you use Facetime video, you don't get charged separately for audio -- it's just data.

I'm not sure how this was all concluded though...
S

This will finally allow Verizon to close the feature gap they have with ATT and T-Mobile. I wonder how long Verizon will wait to shutter there 2g network and migrate that spectrum over to A-LTE. I will have to see if the new phone and or software will support VOLTE as i was prepared to switch to ATT from VZW for talk and surf. The CDMA network just needs to be shuttered as soon as possible it is a drain on there spectrum resources.

Plenty of bandwidth available for pushing voice over data, but customers with unlimited contracts are ruining things for everyone?

What's the point of this app? We already have FaceTime - why do we need a second-rate, Verizon-specific knockoff of it?

Elbon said:
What's the point of this app? We already have FaceTime - why do we need a second-rate, Verizon-specific knockoff of it?
Click to expand...

How does FaceTime work on Android phones?
A

agree with most. Only care about simultaneous data & voice.

AppleScruff1 said:
How does FaceTime work on Android phones?
Click to expand...

Why does that matter? I don't have an Android phone.
I

Finally...Now lets hope the 6 implements VoLTE, and not have to wait for the 6s or 7.

LostMyiPhone said:
Also, look at how well-manicured that beard is! Holy cow!

Be all you can BEARD bro!
Click to expand...

We will stick with Facetime video/audio calls thank you very much.

It clearly states that it will count as a voice call and will count against minutes. You are not going to get dinged twice because of it.

I feel like the makers of this screenshot missed an opportunity to show the human nuances that can be conveyed via video chat… such as eye contact: