A video featuring an alleged "iPhone 9" aka "iPhone SE 2" or low-cost iPhone surfaced on TikTok today, sparking discussion that this is the design of the affordable $399 device that Apple will release in the next couple of months. 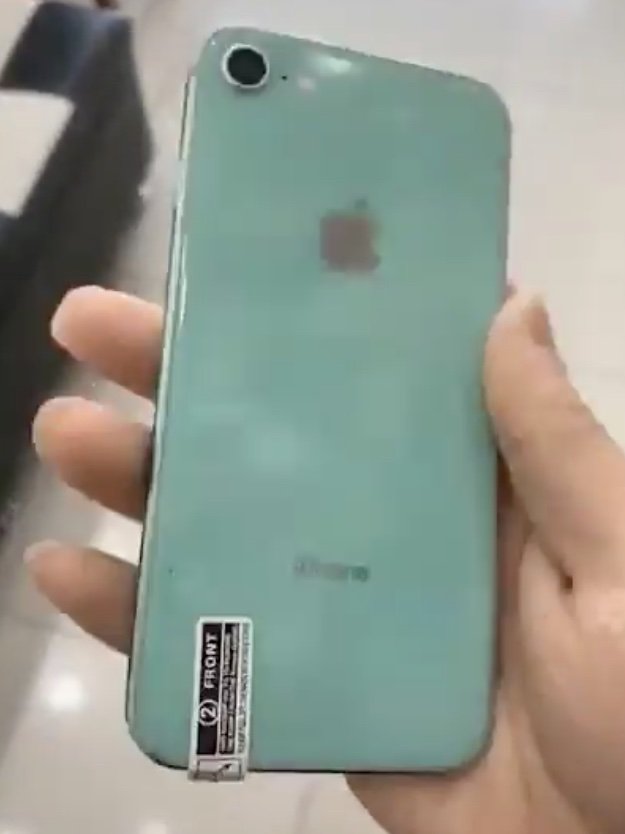 The iPhone in the image features thick top and bottom bezels, a Touch ID Home button, and a seafoam green color, but notably, it also has an iPhone 4-style design, which is not at all in line with current rumors.


https://twitter.com/i/web/status/1230176767433990144
Everything we've heard about the low-cost iPhone suggests it's going to be physically identical to the iPhone 8 but with an upgraded A13 processor, which makes sense given its price tag.

Rumors suggest Apple is going to price the device at $399, and at that price point, it's unlikely Apple is putting development resources into an entirely new device design like the one that's depicted here.

The iPhone in the image is likely a modified iPhone 8 or similar that has a custom casing installed. There are custom casings like this available for those who want to change the design of their older iPhones, and that's what we're probably seeing.

As mentioned before, we're expecting the new low-cost iPhone to look identical to the iPhone 8, but with upgraded internals. It will be similar to the iPhone SE, which adopted Apple's iPhone 5 design with more modern components.

Rumors suggest that the new low-cost iPhone is going to launch in the first half of 2020, with Apple said to be planning an event for March 31. If there is indeed a March 31 event where the new iPhone is shown off, we can expect a launch to follow on April 3.

Update Feb 20: Forum member primarycolors has discovered an aftermarket casing for an iPhone 8 that appears to match the one seen in the video.

no, the phone is running iOS 12!
Reactions: ksec, Lucas284 and iPhysicist

probably is fake but

"If this were a legitimate iPhone prototype, it would almost certainly have a “Proprietary and Confidential” warning on the lock screen"

Maybe its an actual production model not a prototype?


viettanium said:
no, the phone is running iOS 12!
Click to expand...

Im surprised we haven't seen any leaks of this thing
Reactions: viettanium

Saw this video as well on TikTok! I really don't think that design is what we'll see since other rumors have been pointing to the iPhone 8 design. It would be cool if the design was real because the design of the iPhone 5s / SE is still one of my favorites to date.
Last edited: Feb 19, 2020
Reactions: DifferentThinker, leftoverbacon, TMax and 2 others

If it is real it looks pretty good with the flattened edges. I was hoping for midnight green rather than the mint as a colour option though!

thadoggfather said:
probably is fake but

"If this were a legitimate iPhone prototype, it would almost certainly have a “Proprietary and Confidential” warning on the lock screen"

Maybe its an actual production model not a prototype?

Im surprised we haven't seen any leaks of this thing
Click to expand...

(Assuming this is fake) Presumably as it looks virtually identical to the iPhone 8? Would make taking the risk of leaking something less appealing possibly.

In theory, but they could ship some with 13.3.1 and only offer 13.4 at time of release coinciding with production cycle

With XR, iOS 12.1 was the version by the time it was for sale but many units (mine included) shipped with 12.0.1 depending on when it was made

12.0.1 on XR was never publicly signed, it either came with the phone or it didn't
Y

i actually hope this leak is legit. I love the SE style frame
Reactions: TMax, XeonFurr, Mr Todhunter and 9 others
N

You can buy unique chassis designs on AliExpress. You can put your iPhone 8 into an iPhone X chassis if you want.
M

Probably fake but, Apple, please give us those squared-off edges like 4/5/SE and new iPads!!!
Reactions: leftoverbacon, TMax, TheMarc and 5 others
B

The ugly color seems legit.
If you like the color, that's fine. To me, these pastel colors are getting old.
Reactions: Ladybug and macduke
L

Braderunner said:
The ugly color seems legit.
If you like the color, that's fine. To me, these pastel colors are getting old.
Click to expand...

Was going to say this. That gives it the most credibility, lol. But something about the animation seems off, but it has been several years since I had a Touch ID iPhone.

Might be fake, but that looks great. Looking at iPad Pro, I’ve been expecting this sort of look going forward, so interesting to see it here & looking really good, authenticity be damned.
Reactions: jgdeschamps

The antennabands looks absolutely not apple. The SIM card tray either. So this one is fake even without the ios12 hint - no not real.

The Apple logo isnt centered. Why would they not include the same design scheme on the iPhone 9 as well. I think it looks cool though. The flat sides are lovely.
Reactions: TMax, waquzy and NavySilver

What the heck did they use to record that crappy video? An Android?
Reactions: timme and Bernardinho

The fact that the Apple logo isn't centered.

FLAT edges!! 😍
volume and lock buttons are still opposed, so still plenty of inadvertent button presses
screen size is a little big, but I'd still upgrade from my SE to this if it were real
Reactions: leftoverbacon and arkitect
G

I think it would be so odd if they released an SE 2 in 2020 with the EXACT same design as the iPhone 8.
You must log in or register to reply here.
Share:
Facebook Twitter Reddit Email Link
Register on MacRumors! This sidebar will go away, and you'll see fewer ads.
Sign Up
Top Bottom