In November 2010, Mac and iOS developers Algoriddim first previewed their djay app for iPad. The beautifully designed app pushed some boundaries of the iPad by taking advantage of new iOS 4.2-specific audio features that allowed them to perform realtime mixing effects and audio analysis.

That app has since received a number of positive reviews and won an Apple Design Award in 2011.

Later this week, Algoriddim is launching a new app called vjay which again offers some impressive real-time mixing and effects, but now applied to video. Algoriddim has provided MacRumors with this exclusive preview of the app:

Similar to how djay works, vjay allows you to mix/fade between two video clips and apply real time effects to the output. Due to the heavy processing required to decode and mix two video streams, the app only works on the iPad 2 or the new iPad.

Video clips can be full music videos, such as those downloaded from the iTunes store, or they can be your own personal video clips. Audio can either be the original video audio or intermingled with songs your own music library. Both video and audio tracks can be swapped out independently at any time.

Regardless of whether or not you have any actual djing skills, vjay is surprisingly fun to play with once you seed it with your own favorite music videos. Just mixing songs back and forth while playing around with effects is strangely enjoyable. 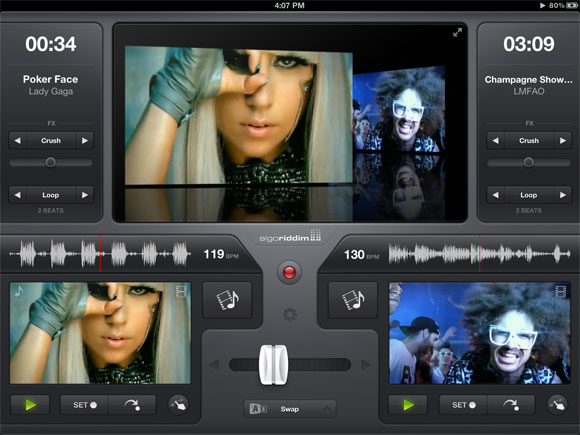 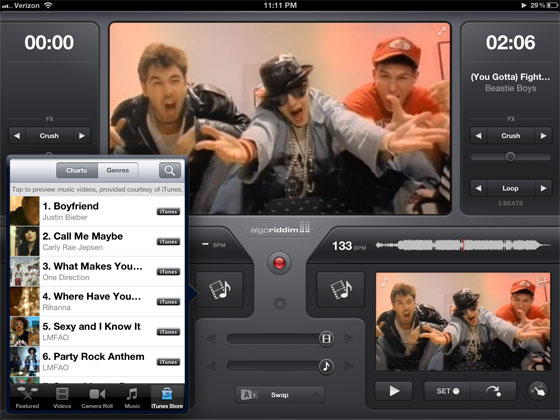 Left: Transitioning from one to another. Right: Integrated iTunes Store. Click for larger.​
If you're like me, your first instinct might be to treat the app like another kind of video editing app, stitching your own clips together into some sort of music video, but that seems to miss the point. The actual focus of the app is these sort of "real time" performances and mixing. The app also has the ability to output mixed content in real time via AirPlay to your television.

These real-time performances can also be recorded and saved to your camera roll to save and share. Meanwhile, more advanced users can take advantage of MIDI accessories and a pre-cueing adapter to line up the next song.

vjay will be available for a discounted launch price of $9.99 on June 7th, 2012. Algoriddim has a teaser page accepting email addresses for the launch announcement.

Wow just wow iPad really is an incredible device with these capabilities.

now you have to be both a good dj & super efficient real time editor!
C

needfx said:
now you have to be both be a good dj & super efficient real time editor!
Click to expand...

And clearly the guy in the video was neither.

sulpfiction said:
And clearly the guy in the video was neither.
Click to expand...

This looks an impressively well made app!

I would love to see Apple buy Algoriddim, Djay is amazing and Vjay looks nothing short of that. Bring these guys in-house!

Couldn't they have chosen a better name?
vjay?
Ehem.
vjayjay...

Wow that's impressive. The iPad had a lot of uses from Nascar racing interviews to mixing music/video

Now you can make headache inducing videos on the go!!!
H

Instabuy. Thanks for the preview.

I made excellent experiences with djay. Even if you are not a professional disk jockey it's the best iOS music player available for just a buck (iPhone/iPod touch version). Be sure to get it and play around with beatmatching (Wikipedia) and the other tools. 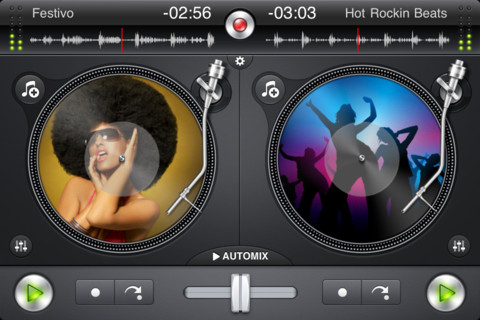 daverso said:
Now you can make headache inducing videos on the go!!!
Click to expand...

I sure hope friends will share them with us - pet videos, toddlers dancing, sly political ads pretending they don't care too much about issues...

its not just the design

its how anyone, anywhere, with an awesome idea can make it a reality on an awesome 9.7" screen

But in your hands, you have the power and awesome support to make alot of yours dreams come true............ in a cool magic way

and now i DJ with just my iPAD n ppl are like wow, they wont say its magic but their eyes tell the truth!!
D

I'm gonna sell my turntables, scratch live and Mix Emergency for this. Can't wait to show up to the club with this. I'll get mad props.

ehh cool app for home use but that's about it.

Funny things is this type of software is not even common on computers, which is a shame.

I remember having met the guy who created Sony Acid, in San Francisco. He had these parties called Fringe going on with his girlfriend and he already developp a similar app to mix not just music but music videos. I asked if he would released because I didn't know of any such software but he said probably not :/

Anyway I'm waiting for the iPad 4, this clearly will be the best and real iPad I've been waiting for with the possibility to not just touch but also write and draw with a pen, like you would actually except on a Tablet, and they will probably have figured out how to have a thinner Retina Display.

That's really bada$$! iPad is a pretty remarkable device to pull something like this off. Sophisticated technology is so sexy.

A colleague just finished a multimedia stage production. He spent thousands on hardware and software for controllable video output. Now here comes Vjay for ten bucks and changes the game. With a couple of iPads and HDMI connectors, real-time media manipulation is now cheaper and more efficient than ever.
D

Augure said:
Funny things is this type of software is not even common on computers, which is a shame.
Click to expand...

VDMX, Modul8, Resolume. They do have more than 8 buttons though, so you may have to read a manual and/or develop some skill!

This is cool for the kids though.
K