A significant number of iPhone and iPad users on the MacRumors discussion forums, Apple Support Communities, and Twitter have reported an apparent iOS bug that causes Safari, Mail, Messages, Notes, Chrome, and select other preinstalled and third-party apps to crash or freeze after tapping or long-pressing on web links.


The issue has grown wider since iOS 9.3 was publicly released last week, but some users also claim to be affected on iOS 9.2.1 and earlier software versions. A wide range of devices appear to be affected, including the iPhone 5, iPhone 5s, iPhone 6, iPhone 6 Plus, iPhone 6s, iPhone 6s Plus, iPad Air 2, and iPad mini. 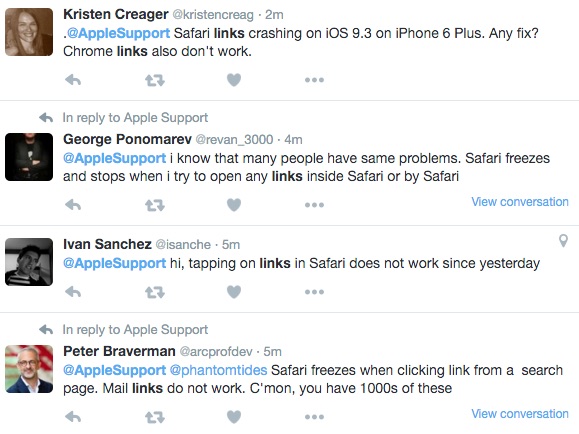 Apple has yet to comment on the matter, but some users have suggested turning off JavaScript under Settings > Safari > Advanced as a temporary solution. However, this will degrade your web browsing experience. Force closing Safari or other affected apps, or restarting the iPhone entirely, does not appear to fix the problem.

The underlying cause of the problem remains unconfirmed, but there is speculation that the Booking.com app may be a contributing factor. Over the weekend, a Russian-language video was uploaded to YouTube that demonstrates how Safari links become unresponsive on iPad Air 2 after the popular travel app was installed.


Mobile specialist Ben Collier believes there may be a related bug that breaks iOS 9's new Universal Links feature when an app's site association file is beyond a certain size, and iOS developer Steven Troughton-Smith confirmed that the Booking.com app had an unnecessarily large 2.3MB file for deep linking.

In iOS 9 Apple introduced Universal Links, these allow app developers to associate their website and app, so links to the website can open the app up automatically if installed. For example, following a link to a Guardian article opens up the Guardian app to that specific article instead of their website. [...]

It looks like there's a bug in iOS that completely breaks the Universal Links if it gets served an app association file that's too large. [...]

It seems that the large size of their file, due to it having every URL from their website inside it breaks the iOS database on the device. Apple allows you to have pattern based matching, so instead of having to include every hotel's URL in the association file, Booking.com could just put /hotel/* to match all the hotels on their site.
Click to expand...

Booking.com has since reduced the file to around 4 KB, which should prevent the issue from affecting additional users, but it appears that the deep linking iOS database will remain corrupted on devices already affected until Apple releases a software update.

In the meantime, some users have resorted to using Puffin, iCab, or select other third-party web browsers to bypass the web links issue. Apple engineers are seemingly aware of the issue, and this article will be updated with new information as it becomes available.

Update: Collier now points towards tweets indicating that the issue may be related to the Shared Web Credentials daemon, which allows apps and websites to share login credentials for the purposes of Universal Linking.

Update 2: Apple has confirmed to TechCrunch that it is working on a fix for the issue and plans to release it in an upcoming software update.

Meanwhile I'm here on a 6S having experienced absolutely none of all of these issues...
Reactions: iAdam1n, 952863, Jamalien and 17 others

soupcan said:
Meanwhile I'm here on a 6S having experienced absolutely none of all of these issues...
Click to expand...

Thanks for letting us know...

Breaking news: the world does not revolve around you
Reactions: alperiskender, Bubba Satori, alecgold and 23 others

For how many Betas and still this happens....and every time?
Reactions: sidewinder3000, duervo, Lazy and 13 others

no problem on my iPhone 6 and ive been using it since beta 1 and also got the Booking app installed
Reactions: alecgold, 952863 and raybo

I remember a time when OS releases were stable, under Scott Forstall of course. Everything from hardware to software is just flimsy now.
Reactions: alperiskender, djang0, JPLC and 18 others
I

Dilster3k said:
I remember a time when OS releases were stable, under Scott Forstall of course.
Click to expand...

Revisionist history is not real history.
Reactions: mattyu007, sidewinder3000, Lazy and 16 others

Another proud moment for Apple.
Reactions: Vanilla35, true god, Benjamin Frost and 10 others
B

What a terrible week for Apple.
Reactions: Benjamin Frost, AleXXXa, Glideslope and 1 other person

Andres Cantu said:
This is starting to become the norm. Issues with every single update, no matter how big or small.

By the way, not the first time Apple pulls an update. Talk about embarrassing and unacceptable
Click to expand...

Good guy Andres, let's start again. Let's see if "it's all dumb users' fault" and "nonsense mine works perfect" have something new to say
Reactions: SirCheese, DoctorKrabs and H2SO4

Dilster3k said:
I remember a time when OS releases were stable, under Scott Forstall of course. Everything from hardware to software is just flimsy now.
Click to expand...

iOS was never stable under Scott Forstall. iOS 2 was the worst of them all.
Reactions: sidewinder3000, QuarterSwede, ohio.emt and 1 other person
M

Anybody having an issue where it crashes and sends the phone into an endless reboot cycle?
Reactions: psac

Seeing how long the beta was and this didn't pop at all, guessing there is a 3rd party app involved that is causing this happened?
Reactions: Lazy, saba01, HenryDJP and 5 others

I wish Apple would have simply provided a switch to disable the "deep link" functionality. In general, I find it useless, and in most cases want to keep browsing in Safari rather than jump to a 3rd party app. Perhaps now Apple will decide to give us control over this feature now that it's been shown to be able to kill Safari functionality when deep linking goes wrong.
Reactions: sidewinder3000, Lazy, thisisnotmyname and 3 others

ppcebay said:
Thanks for letting us know...

Breaking news: the world does not revolve around you
Click to expand...

Members have freedom of speech.
Reactions: Vanilla35, saba01, Codeseven and 3 others

Dilster3k said:
I remember a time when OS releases were stable, under Scott Forstall of course. Everything from hardware to software is just flimsy now.
Click to expand...

Oh, I remember a time when everything was perfect... Now it's all s!*#?=!$%(#! (memory filter)
Reactions: Lazy and ConvertedToMac
T

Good news: The Apple Support Twitter account is already proving to be a fantastic way to let Apple know of bugs.

Bad news: Apple is playing a very hard game of whack-a-mole when it comes to bugs. What is the solution? More developers means more hands on deck, but that can also lead to even more problems.

Personally, I would love, love, LOVE for iOS 10 to be a Snow Leopard kind of release. But I would imagine there is far too much temptation and expectation to do something "big" for the number 10. And think about it... remember the days when these forums were filled with the same huge lists of feature requests that Apple seemingly refused to deliver on year after year? You don't see very much of that anymore. I know Apple is always looking for ways to make iOS stand out, but if you can (generally) satisfy the kind of people that frequent MacRumors in regards to feature requests, I'd say you can relax for a bit and focus on performance and GUI issues. iOS is great, but it could be so much better with more polish.

Just my two cents, which understandably adds very little to the quadriquintillitribillion dollars that Apple has in their bank account.

EDIT: Now that we know the issue lied outside of Apple, I guess my little soapbox speech isn't as relevant to the subject matter. Oops.
Reactions: sidewinder3000, Lazy, Slix and 5 others

If I'm honest I can never understand this.

If this was Windows, and Microsoft had to, which they do, make things work on millions of not billions of permutations of hardware, built from anyone from a giant company, down to a child in his bedroom from second hand bits, then sure, we'd all expect things like this.

But when YOU build the hardware yourself, and there are such a tiny number of variations out there, it always amazes me, how, even after multiple beta's you can have things like this happen.

spazzcat said:
Seeing how long the beta was and this didn't pop at all, guessing there is a 3rd party app involved that is causing this happened?
Click to expand...

Yeah, if it was the booking.com app, an update for that appeared just a couple of days ago.

And iOS 9.3 WAS working fine (for me!) just after installation in the middle of the week.

So it add to the evidence that it's the Booking.com update that introduced some instability to the system.
Reactions: sidewinder3000, duervo, lysingur and 2 others

I'm so damn sick of every public release of iOS feeling like a beta. And right around the time things start smoothing out after multiple .X updates we get the next full iOS release and start all over. It's not like it's unusable but this is the norm nowadays. Oh, and then the exceptionally feasible and reasonable option to restore as new each time... I love that one. </bitching>
Reactions: Glassed Silver, Vanilla35, Benjamin Frost and 5 others

So from the update, does it appear that the booking.com app is the cause, and not iOS?

If so, I'm looking forward to the raft of apologies to Apple that should be appearing on this thread v soon.....

havent had any issues with my phone since installing
Reactions: lysingur and Ray777
A

can someone explain to me in simple terms how the booking.com app in its "sandbox" managed to affect things outside of it's sandbox?
Reactions: sidewinder3000, Benjamin Frost and Oblivious.Robot
You must log in or register to reply here.
Share:
Facebook Twitter Reddit Email Link
Register on MacRumors! This sidebar will go away, and you'll see fewer ads.
Sign Up
Top Bottom