As above, its starting to get sluggish recently and the battery is not what it used to be. Its the base model with 4GB Ram and 128GB SSD.

I mainly use my current model at home but I do need it sometimes when out and about. I make (attempt) music in my spare time so using the 13" is to small so I have a budget 24" Acer monitor (1080p) that I use as a second screen. I also sell quite a large amount of items on eBay (vintage items) so its nice to have a few windows open for Garagesale, Lightroom and Safari for looking up items etc. I also very occasionally use my iPad using the Duet for a tethered 3rd display but I hardy use it now after getting the 2nd monitor: 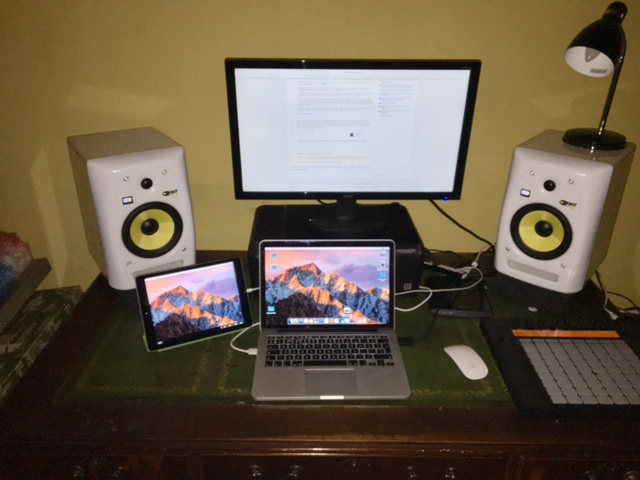 I have a iPad Air 2 which again, is from my late mother (I bought it for her about a year ago and I think she used it twice the whole time!) which I hardly use. It was also such a nightmare getting the iCloud turned off so it so I could set it up under my one. Apple were extremely unhelpful in that matter. They wanted a letter from the courts stating it was my property etc but I got there in the end by reconnecting her Vodafone contract with the same number for a month to get the access code for her hotmail which was her backup for her iCloud as I didn't know her passwords etc.

So carrying on, I hardly use the iPad but I might make use of it a lot more as a central hub for HomeKit/HomeBridge appliances as I start to get more smart things setup, so I think I might keep it for now.

So I figure the options are based on a budget of around £2000:
Opinions or other options?

As I mentioned before, I just really need two nice screens with some portability. I don't use them for playing games.

OP wrote:
"I mainly use my current model at home but I do need it sometimes when out and about"

If it's mainly used "on a desktop", why not get an iMac for the desk and keep the MBPro?

Set up the iMac as "your main machine", then "clean off" and re-purpose the MBPro for "traveling around".
Reactions: Fancuku and waring192
W

Fishrrman said:
OP wrote:
"I mainly use my current model at home but I do need it sometimes when out and about"

If it's mainly used "on a desktop", why not get an iMac for the desk and keep the MBPro?

Set up the iMac as "your main machine", then "clean off" and re-purpose the MBPro for "traveling around".
Click to expand...

Is there much a performance difference between the new top 15" MacBook Pro Touch Bar and the new 27" iMac base?
A

If you are thinking of going for an iMac and you were going to spend around £1950.

Then a quick look at the Apple Store gets you this machine for £1899 for a 21.5 inch 4K iMac.
You can mix and match for your needs. Or if you want the 27inch 5K iMac the following package will cost you another £300.