Since the launch of the 2018 MacBook Air, we here at MacRumors have heard multiple complaints from MacRumors readers about the quality of the FaceTime HD camera housed in the device.

There have been multiple threads on the MacRumors forums and the Apple Support Communities complaining about the graininess of the camera so we decided to investigate to see if it's worse than recent MacBook Pro models or the older MacBook Air.


Subscribe to the MacRumors YouTube channel for more videos.​
Many of the complaints that we saw suggested the camera was poor quality without offering direct comparisons, or with comparisons to FaceTime cameras like those in the iPhone, which are wildly better than the 720p "FaceTime HD" camera Apple uses in the MacBook Air and MacBook Pro lines.

In a direct comparison, photos taken from Photo Booth on a 2018 MacBook Air and a modern 15-inch Touch Bar MacBook Pro are almost identical, and both are pretty terrible. The MacBook Air photos are a bit darker, which can be interpreted as "worse," but all in all, both cameras are bad. 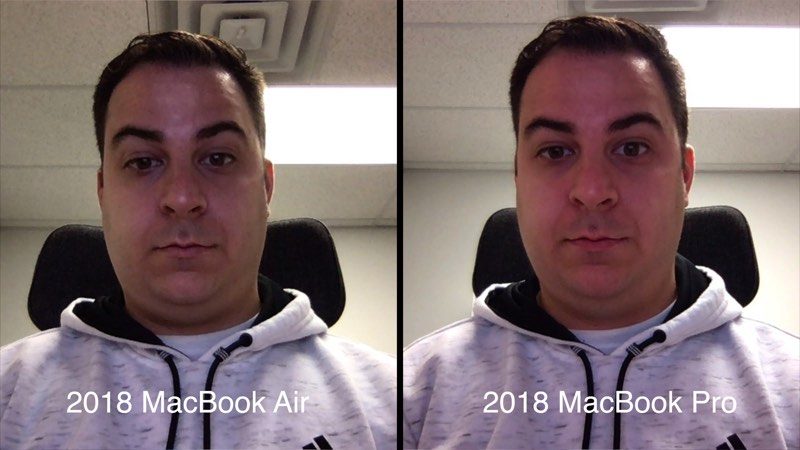 When comparing the new MacBook Air and the older 2015 MacBook Air, however, we found a more noticeable difference in quality. The FaceTime HD camera in the 2015 MacBook Air is a bit clearer and brighter, with the 2018 MacBook Air's camera letting in less light and producing an overall grainier, less clear result. 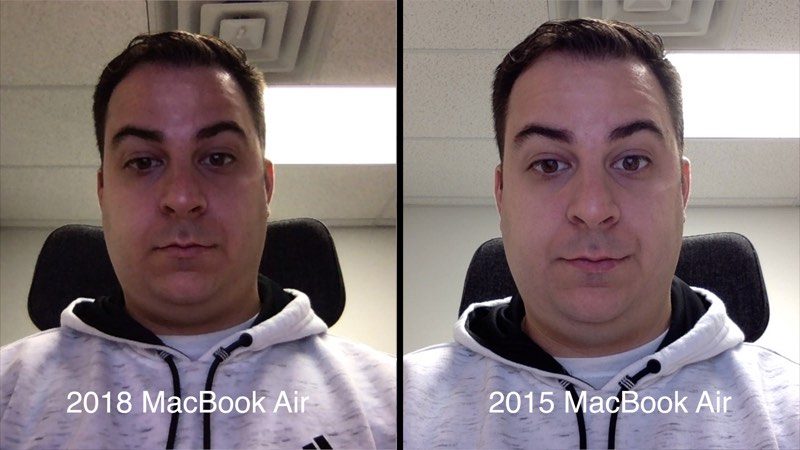 Even though we can clearly see a difference between the 2015 and the 2018 MacBook Air FaceTime HD cameras, it's not a huge gap. Both cameras are subpar, and that the FaceTime HD camera on the MacBook Air appears to have gotten worse over time rather than better is certainly disappointing. 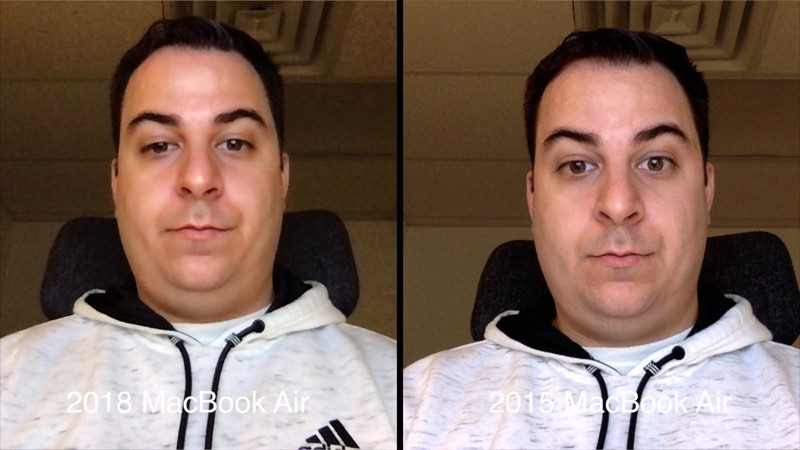 On a modern machine with a Retina display, a 720p FaceTime HD camera just doesn't hold up, especially in comparison to devices like the iPhone XS, iPhone XR, and iPad Pro, which have much higher resolution cameras. FaceTime is limited to 720p on all devices, but the FaceTime HD camera does serve other purposes as well.

2018 MacBook Air owners are disappointed, and honestly, MacBook Pro owners should be too. 720p looks awful and it is outdated technology. Apple implemented a better 1080p FaceTime HD camera in the iMac Pro, and the quality is much better. 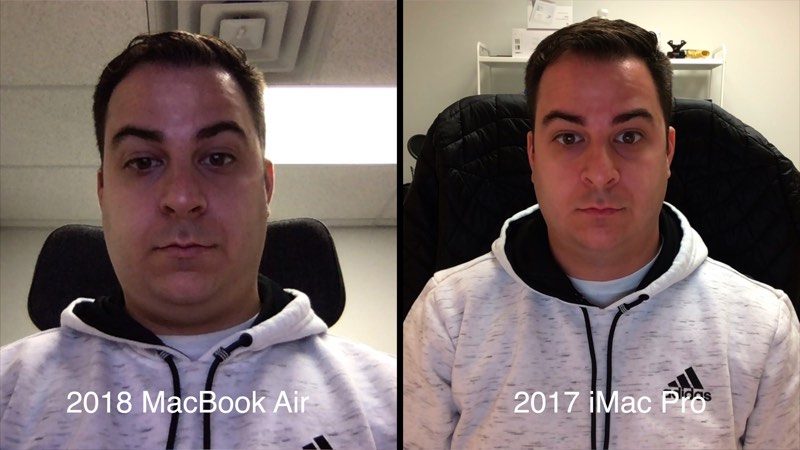 Hopefully future Mac notebook updates will feature higher-quality webcams as video quality has become an increasingly important feature that consumers look for when making a purchase.

Not sure that I agree with "awful".
Reactions: Kram Sacul, Kebabselector, iLoveiTunes and 17 others
D

Still better than almost all built-in webcams on the market.
If you want the best of course, you buy the pro models.
Reactions: Dj64Mk7

Yes, it is awful. I complained to Apple and returned my 2018 Air within 48 hours. FaceTime is one of my main apps I use regularly on Mac -- gets about 6 hours of usage daily, to patients and family members.
Reactions: lionkin, joy.757, mechatak and 26 others

A trillion dollar company lol well at least they used to be. Can't wait to see the Apple apologist put a positive spin on this one...
Reactions: maverick28, AlexGraphicD, lionkin and 33 others

What else would you expect from a twelve-hundred dollar computer?

Though it must be said: No MacBook anything has a good FaceTime camera.
Reactions: joy.757, iop, Jimmy James and 10 others
3

I am guessing there was nothing better to report on today...
Reactions: jeffkempster, The Don Onez, HenryDJP and 2 others
R

dumastudetto said:
Still better than almost all built-in webcams on the market.
If you want the best of course, you buy the pro models.
Click to expand...

The cameras are nothing special on the pro models either. If you want the best use an external camera.
Reactions: martyjmclean, Mr. Retrofire and Frosties

That happens when you spend all the money on making notebooks thinner instead of putting in better components and then decide how thin it can be.
Reactions: Kram Sacul, eduardoregueiracampos, AlexGraphicD and 39 others
M

The main light source is a florescent light behind the subject and the secondary light source is your screen. Did you think this was going to produce a quality shot?
Reactions: Kram Sacul, staticline, 708692 and 6 others

I just wanted to thank MacRumors for posting a story like this to bring us all back to earth after Apple announced their phenomenal New Year's Day app sales.
Reactions: Yvan256, Jimmy James, alps.villar and 9 others

Even my 2017 iMac's camera is awful. I'd put it on par with the iPhone 4's front-facing camera.

I don't need the Mac's camera to be as great as the iPhone's, but could they at least look like they came from the same era of electronics?
Reactions: Kram Sacul, Yvan256, Jimmy James and 7 others
S

It's because of China!
Reactions: Kram Sacul, Jimmy James, rtdunham and 5 others

For those of you stuck on a 2015 machine and yearning for that sweet sweet 2018 experience, I've got a DIY solution for you.

Step 1: Make sure your fingers are nice and greasy.

I don’t see significant difference. Most people should cover it with tape anyway.
Reactions: jerwin, WatchFromAfar, MacLawyer and 3 others

Well, you are using it wrong !

Buy iphone holder extention and mount it to your mac.

Now you have better camera... 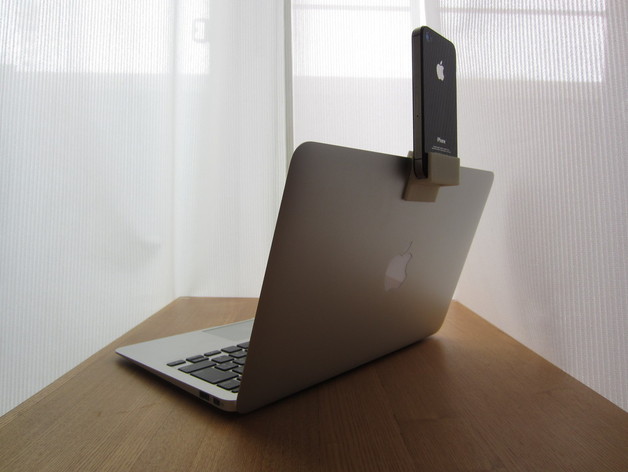 I think the word "awful" is being misused here.
Reactions: NightFox, Darmok N Jalad, cmichaelb and 2 others

I really can barely see a difference. They could all be quite a bit better of course, and I'm sure will over the next few years, but all the cams look very similar to me, which is to say, barely-adequate resolution and pretty awful dynamic range/color. Why don't they just take the front-facing iPad camera for this? Is it really too thick?
Reactions: adib

You have to realize that Apple probably saved 2 or 3 dollars by cutting corners on those FaceTime cameras on their Macs. This was very important to Apple.
Reactions: joy.757, mechatak, dan110 and 22 others

of course, how is Apple going to charge the premium $599 more for the 2019 MacBook air? ...BETTER CAMERA of course!
Reactions: MarkIII, martyjmclean, Roger67 and 1 other person

In 2019 the words "horrible" and "awful" now mean not quite as good as the best.
Reactions: Kram Sacul, Jimmy James, NightFox and 2 others

Damn, his selfie game might be better than mine idk the jury is still out
P

IMO, taking a look at those photos, there's a difference, but I wouldn't much difference for consumer use - it's like having face time chat on an iPhone. If quality is really important (for professional use, or where color, contrast, etc really matters), I would use an external camera.