Google is overhauling the YouTube app for iOS to add more intuitive gestures and control options, according to a new blog post on the YouTube site. 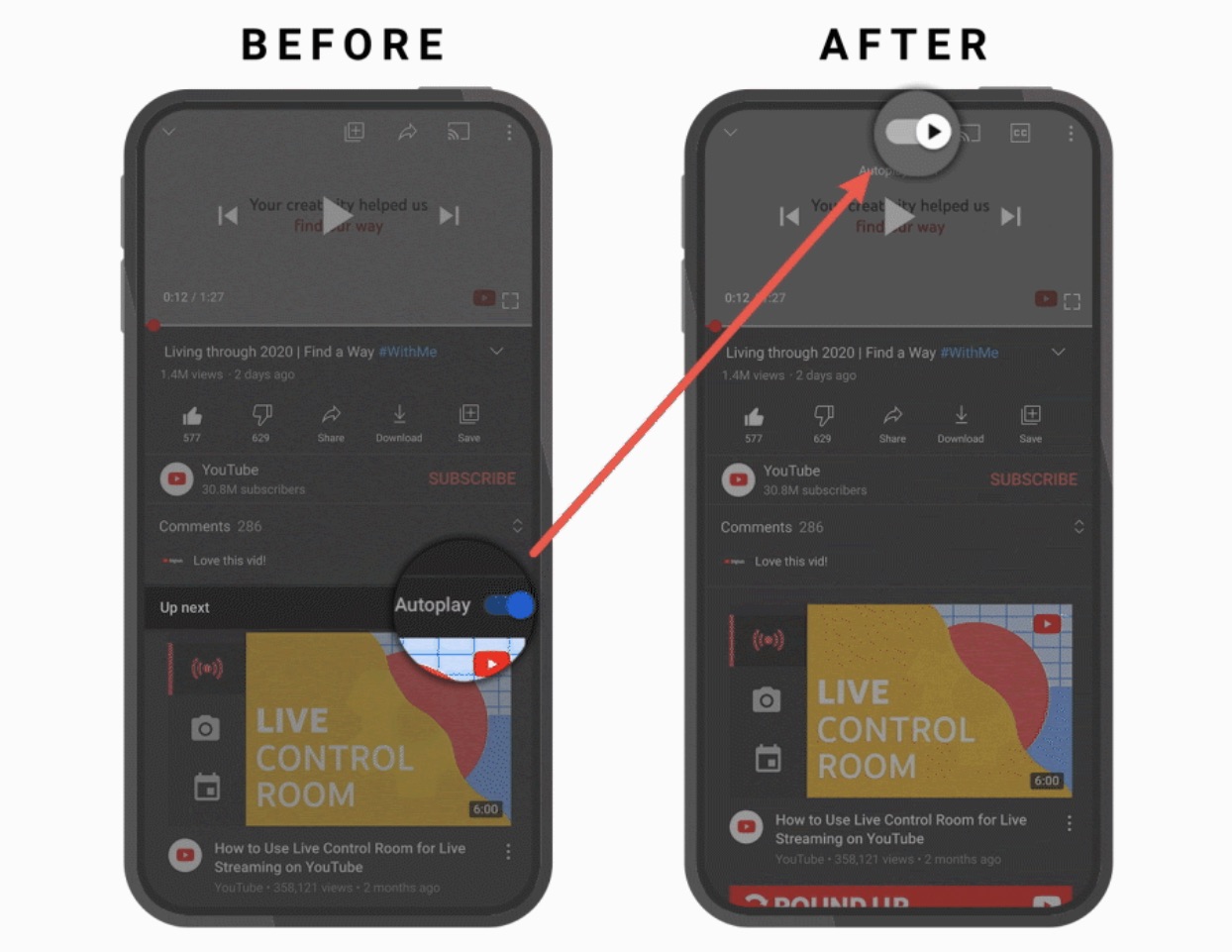 The AutoPlay button is being moved from below a video to the top of a video, so it's easier to turn off autoplay content if desired. Captions are also easier to get to right above the video screen, and YouTube said there are "snappier" controls that make actions faster. 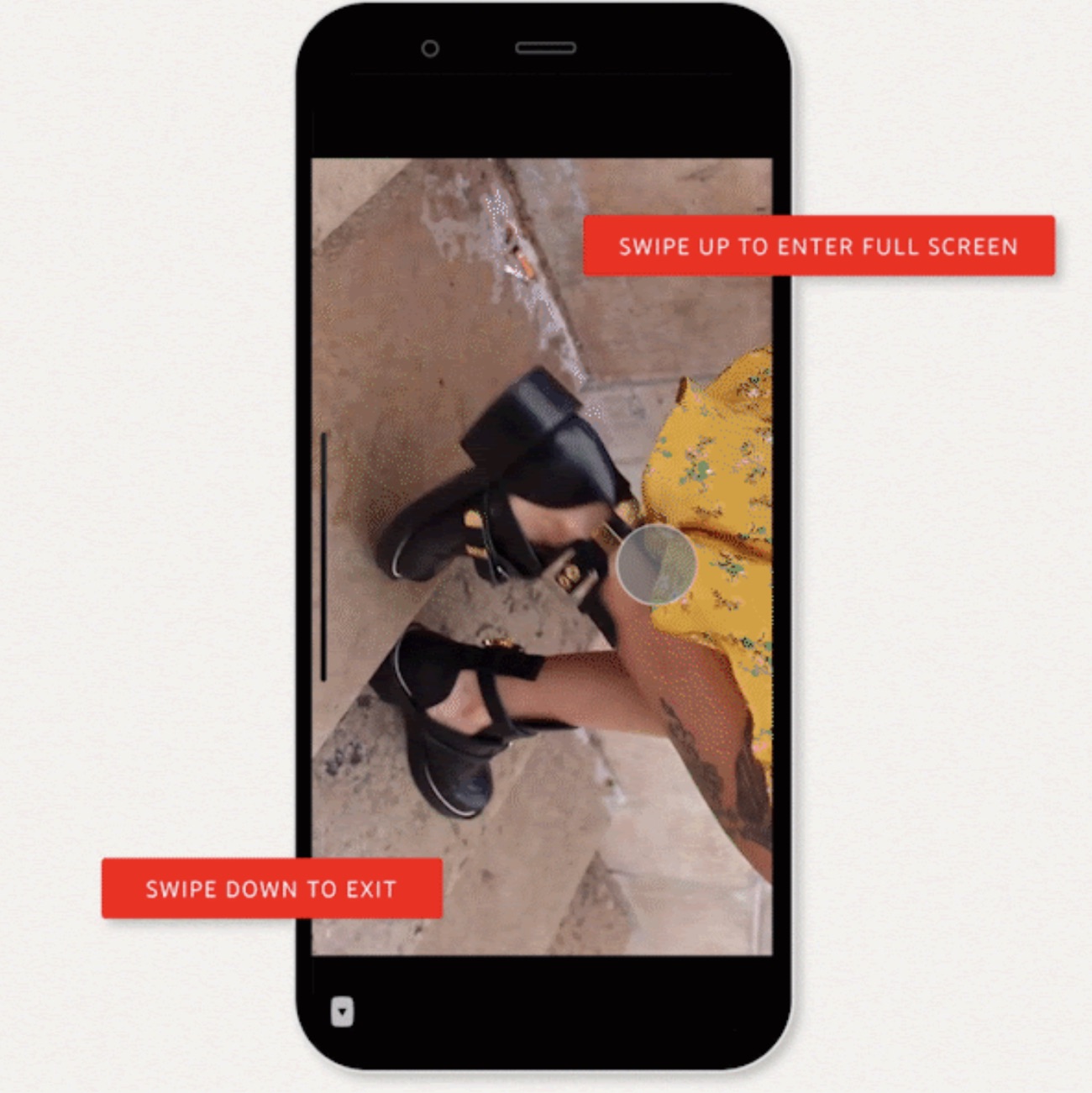 Tapping on the timestamp will now toggle between the time left on a video and the time that has elapsed, so you can view the video length in your preferred way.

YouTube for iOS is getting suggested actions, which are designed to prompt users to do things like rotate a phone or play a video in VR when YouTube thinks a better viewing experience is available.

YouTube in May added video chapters, and now the feature has been expanded to include a list view that pops up when you tap or click on the chapter title. It includes a complete list of all chapters in the video and a preview thumbnail of content.

These features are rolling out to YouTube users on iOS starting today, with YouTube available from the App Store for free. [Direct Link]

Could they overhaul it to allow PIP, please?
Reactions: saggyhaggis, DeApp1e, macguru212 and 42 others

I honestly think YouTube app is coded by monkeys... Way too many bugs and aggressive ads.
Reactions: Spishak, Kram Sacul, Stars&Stripes and 20 others
L

Dear Google: gestures are not intuitive.
Thank you.

NB the icons are not either - 'autoplay' is a descriptive word. Their new icon is unintuitive.
Reactions: name99, Brandhouse, mcdawg and 10 others

If they could just enable HDR on iPhones 12, iPad Pro and Apple TV 4K. That would be great.
Reactions: MartyvH, Ntombi, moldy lunchbox and 15 others

macbookpro212 said:
I honestly think YouTube app is coded by monkeys... Way too many bugs and aggressive ads.
Click to expand...

Youtube sucks nowadays, too many ads in short videos, and it's getting hard to block them.
And then there's the autoplay toggle, I hate autoplay, I always toggle it to off, but as soon as I delete youtube cookies it resets to on.
I have to delete cookies if I want video's from the UK or the states for instance, after I switch my VPN to the UK I still get lots of videos from where I live, so, deleting cookies is necessary.
Reactions: Jmausmuc, amartinez1660, lJoSquaredl and 7 others

“Sorry guys, we know a lot of you are paying $14.99 per month for Premium but we don’t care about you and we are not adding PiP. But here have a few visual cues and improvements...”
- YouTube
Reactions: Pavol Kasala, saggyhaggis, DeApp1e and 17 others

And still no PiP despite shelling out the cash for premium.

Sure the mobile website has it, but it uses “auto” quality and “auto” is 360p which you have to change each time.
Reactions: Pavol Kasala, saggyhaggis, amartinez1660 and 9 others

Macropanda said:
If they could just enable HDR on iPhones 12, iPad Pro and Apple TV 4K. That would be great.
Click to expand...

I have HDR on the 2018 ipp since.. since today.
Reactions: Apple4everr

I don't care where they put the Autoplay button so long as it is off by default. It's a 'feature' I don't want
Reactions: Pavol Kasala, Stars&Stripes, amartinez1660 and 13 others

Ugh, non-standard OS design to confuse the users. This doesn’t make us want to switch to Android, it’s makes us hate your Apps.

Microsoft learned this the hard way in the 90’s. Apparently Google is doomed to repeat these mistakes….
Reactions: name99, MrSkoTA, MrFootery and 6 others

They need to do something about the commercials.
Reactions: macguru212, Fred_Eric, amartinez1660 and 6 others

No thanks. My ad-blocker will not work in that app.
Reactions: MrSkoTA and t1meless1nf1n1t
I

Again, their apps use Android UI on iOS. Like the Apple TV app got much worse when they switched to this Android UI. Why can't they follow the learned behaviour that users have for each platform, instead of users having to re-learn their special App gestures?
Last edited: Oct 26, 2020
Reactions: Stars&Stripes, Brandhouse, MrSkoTA and 2 others

Macropanda said:
If they could just enable HDR on iPhones 12, iPad Pro and Apple TV 4K. That would be great.
Click to expand...

I have HDR playback in the YouTube app on my iPhone X. Not sure when they first enabled it, but I first noticed it a couple days ago.
S

How about making native dark mode available to everyone already? It’s been 5 months and I still don’t have it.

Theyayarealivin said:
They need to do something about the commercials.
Click to expand...

You can do something about it. I pay $7.99 per month for YouTube Music just so that I never have to see advertisements on YouTube. That's grandfathered pricing and you might have to pay $9.99 now, but if you're someone who watches like an hour of YouTube per day like I do, it's worth it.
Reactions: shanson27, MartyvH, TouchedByAl and 4 others
F

gtg465x said:
I have HDR playback in the YouTube app on my iPhone X. Not sure when they first enabled it, but I first noticed it a couple days ago.
Click to expand...

I don't on iPhone 12 and that's what OP was referring to. There's no HDR on iPhones 12.

PIP is the only change and new feature we want Google/Alphabet.
Reactions: MacRealist91, MrSkoTA, DeepIn2U and 1 other person

Theyayarealivin said:
They need to do something about the commercials.
Click to expand...

laz232 said:
NB the icons are not either - 'autoplay' is a descriptive word. Their new icon is unintuitive.
Click to expand...

They're hoping that some portion of the people who turn autoplay off will just assume it’s gone and meekly adapt. Because their marketing department tells them that they get greater engagement (and thus more ads served) with autoplay on. This is an attempt to make it less likely to get turned off.
Reactions: MrSkoTA and laz232
You must log in or register to reply here.
Share:
Facebook Twitter Reddit Email Share Link
Register on MacRumors! This sidebar will go away, and you'll see fewer ads.
Sign Up
Top Bottom