Apple's new 15-inch MacBook Pro can be upgraded to include a 6-core 2.9GHz Intel Core i9 processor that has demonstrated impressive performance, but one YouTuber is warning customers away from purchasing it with claims that the MacBook Pro chassis can't provide sufficient cooling for it to run at full speed.

Dave Lee this afternoon shared a new video on the Core i9 MacBook Pro he purchased, and according to his testing, the new machine is unable to maintain even its base clock speed after just a short time doing processor intensive work like video editing.


"This CPU is an unlocked, overclockable chip but all of that CPU potential is wasted inside this chassis -- or more so the thermal solution that's inside here," says Lee.

He goes on to share some Premiere Pro render times that suggest the new 2018 MacBook Pro with Core i9 chip underperforms compared to a 2017 model with a Core i7 chip. It took 39 minutes for the 2018 MacBook Pro to render a video that the older model was able to render in 35 minutes. Premiere Pro is not well-optimized for macOS, but the difference between the two MacBook Pro models is notable.

Lee ran the same test again with the 2018 MacBook Pro in the freezer, and in cooler temperatures, the i9 chip was able to offer outstanding performance, cutting that render time down to 27 minutes and beating out the 2017 MacBook Pro.

This kind of thermal throttling really affects the end user. It doesn't matter what you're using it for, like if you're a Final Cut user, or an Adobe Premiere user, or if you're using it for software development or calculations like fluid dynamics -- it doesn't matter what you're doing with your device. If you have any kind of extended computational work that uses the CPU -- that's probably why you're looking at these devices in the first place -- it's going to throttle. And that's unacceptable to me.
Click to expand...

It's not clear if there's something wrong with the MacBook Pro with Core i9 chip that Lee received, because this kind of throttling is likely something Apple would have tested for and not something that other users have reported at this point.

Because this is just one data point, it's not enough information to reach a conclusion about the i9 chip available for the 15-inch MacBook Pro, but additional testing will certainly follow to shed more light on Lee's video. We have asked Apple for comment on Lee's findings, and will update this post if we hear back.

Update: Other reports of excessive i9 throttling have been trickling in from Reddit users who have purchased 15-inch MacBook Pros with the high-end chip. These threads are available here and here.

Will the bad PR ever end? Apple has been facing a lot of issues recently.
Reactions: DeepIn2U, pmore, obu90210 and 33 others
Comment
M

Hasn't this been an age-old problem? I've seen YouTubers show how to redo the thermal paste on other MacBooks to get better cooling/performance.

Edit: I use iStat Menus to permanently keep my late 2013 13" rMBP at max fan speed, and doing light activities I frequently see core CPU temps up to 187. Have seen it go up to 212 F.

I actually used an infrared thermometer on my powerbrick the other day that gets super hot. It was 169 F.
Reactions: mh`, zzu, DogHouseDub and 1 other person
Comment

Premiere tries to use the CPU as much as possible by going full 100% utilization. The problem with throttling is that there's a severe penalty if you do hit the temperature threshold.

Final Cut keeps it under 100% cpu utilization (either that's intentionally done in code, or simply because it's being offloaded by GPU, not sure). Even without full GPU acceleration, Final Cut would still likely complete a render vs Premiere. Just compare the throttling dips. First is Final Cut, and second image is Premiere. 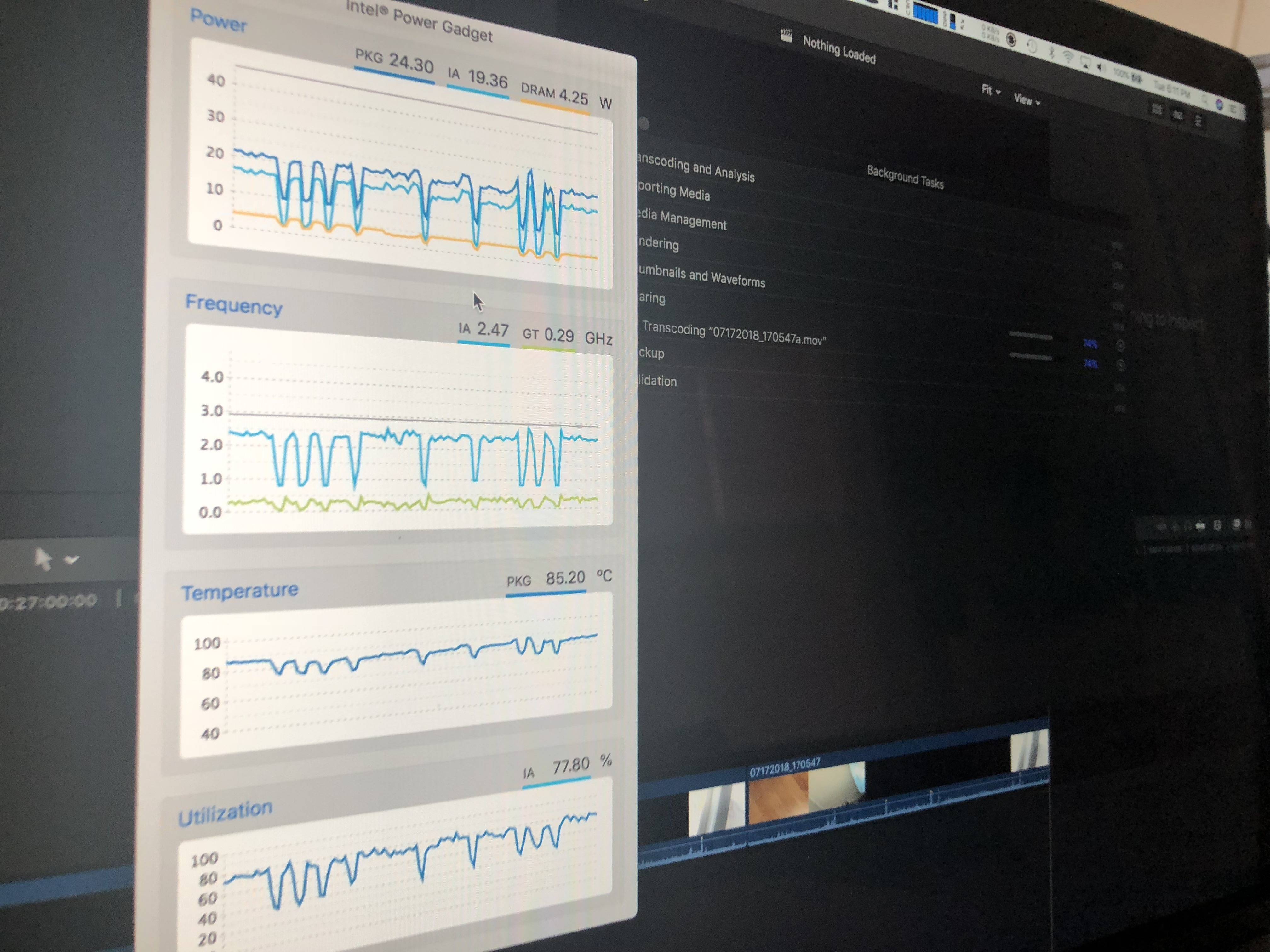 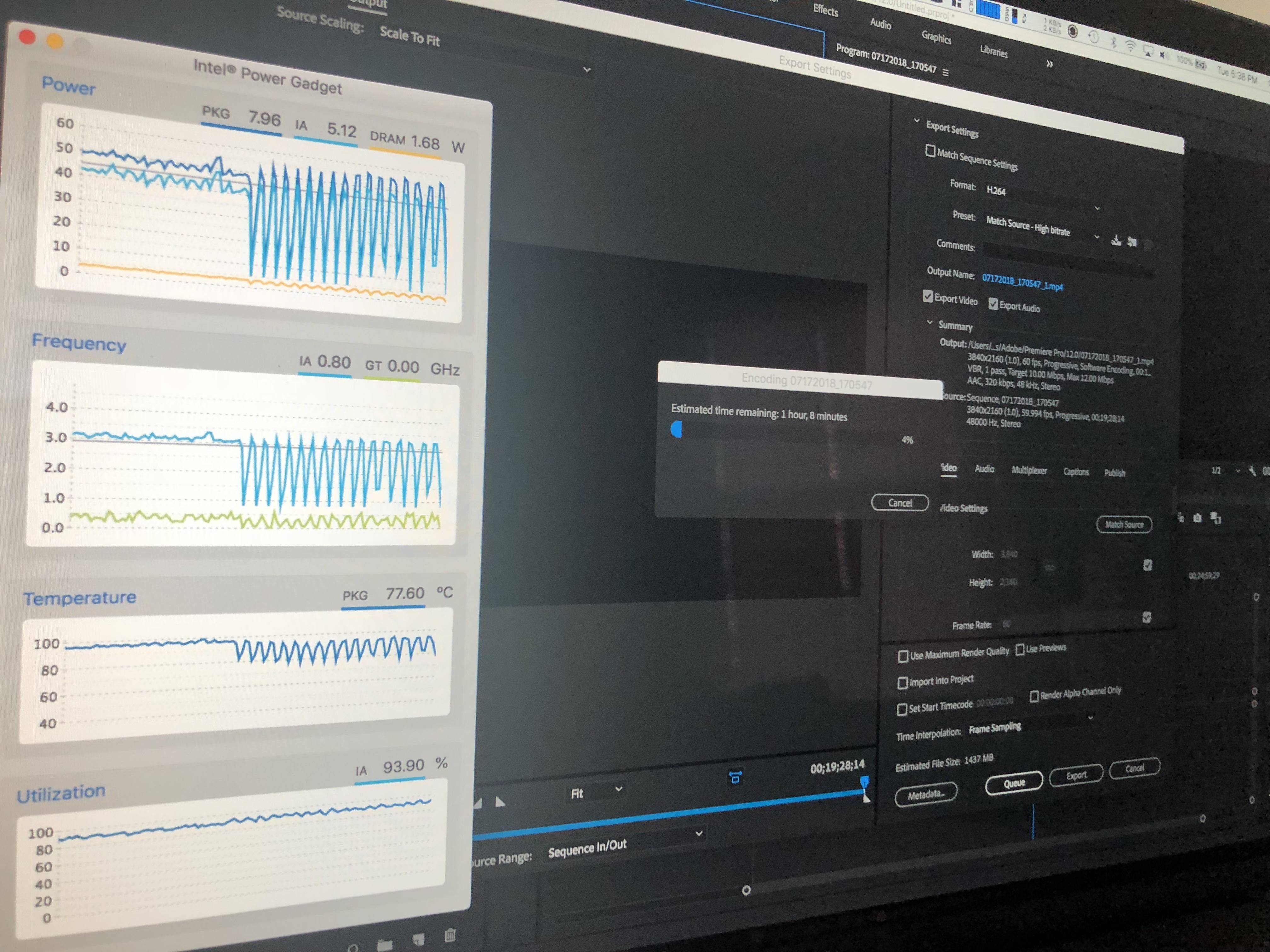 Not sure if people were expecting Macbooks to be able to withstand 100% CPU utilization for hours. If you were, then the past couple of generations have had the same issue.

The only thing surprising is that the 2018 ended up being slower than 2017 laptops. One explanation is that Premier/Final Cut have 2017 Macbook specific optimizations and they're still working on optimizing it for 2018.
Last edited: Jul 18, 2018
Reactions: obu90210, ignatius345, RuffDraft and 27 others
Comment
S

If this is true, it's game over for the 15-inch i9 MacBook Pro.
Reactions: pmore, greenmeanie, jblagden and 45 others
Comment

glad I didn't get that one...
Reactions: geoff5093, Lord of the Pies, dantroline and 2 others
Comment
T

Because this is just one data point, it's not enough information to reach a conclusion about the i9 chip
Click to expand...

Ah, but because some random guy on YouTube made the claim it is Mac Rumors front page news! LOL.
Reactions: Borin, bennyf, diandi and 40 others
Comment

I'm wondering how big of a factor Premiere is in the equation. The video below does a similar test and the 2017 model does win, but it's a FCPX test and the 2018 MBP does hold it's base clock speed throughout the test.

I've always found Premiere and AME to utilize a lot more of the CPU and be all over the map regarding speed, heat, etc.

I figured this would be the case as soon as I realized that the i9 used is an HK variant. K meaning unlocked in Intel nomenclature.
Reactions: zzu and jwwetzel
Comment
P

ThisIsNotMe said:
Ah, but because some random guy on YouTube made the claim it is Mac Rumors front page news! LOL.
Click to expand...

Dave Lee is not some random guy. His claim warrants further investigation.
Reactions: jamesrick80, pmore, Nosferax and 122 others
Comment
B

ThisIsNotMe said:
Ah, but because some random guy on YouTube made the claim it is Mac Rumors front page news! LOL.
Click to expand...

Not good!!! I bought the 13” and I’m completely satisfied!!
Reactions: LeeW
Comment
Z

I predicted this thing would need a cooling pad in order to really be used like a pro rendering machine. This kind of confirms it. I'm sure more news will follow, but this is actually worse than I expected.
Reactions: Truefan31, Lord of the Pies, Killa Aaron and 4 others
Comment
L

yanksrock100 said:
Will the bad PR ever end? Apple has been facing a lot of issues recently.
Click to expand...

To be fair, this isn't so much Apple's fault as it is Intel's. Intel has really dropped the ball in the past couple of years. If they don't right the ship soon, AMD will take over the CPU game for a while. They are late with everything and are having lots of trouble shrinking the dies.
Reactions: ijbond, George Dawes, zzu and 1 other person
Comment

Zwhaler said:
I predicted this thing would need a cooling pad in order to really be used like a pro rendering machine. This kind of confirms it. I'm sure more news will follow, but this is actually worse than I expected.
Click to expand...

I hope this doesn't lead to failure from overheating. I hope the heatsinks and the way they apply the paste can hold up!
Reactions: Cape Dave
Comment

I can't believe Apple would push something so defective. This is some Lenovo-style crap. Waiting to see more tests.
Reactions: mj97, outsidethebox, Panda123? and 20 others
Comment

I'm not surprised at all. The ultra-thin chassis with mediocre cooling does what it can. Of course this chip would work better in some huge bulky gaming laptop chassis, but that's not Mac and never will be.

Part of the reason why my next computer will probably be an iMac
Reactions: 0009827, macboiiiiiiiiiii, Agit21 and 9 others
Comment

lec0rsaire said:
To be fair, this isn't so much Apple's fault as it is Intel's. Intel has really dropped the ball in the past couple of years. If they don't right the ship soon, AMD will take over the CPU game for a while. They are late with everything and are having lots of trouble shrinking the dies.
Click to expand...

Seems like apple’s fault, not intel’s, if it’s true. Apple designed the thermal solution for the MBP.
Reactions: jblagden, coolfactor, EddieRingle and 69 others
Comment

Already got burnt by the first-gen MBP+TB. A 3000-dollar lesson learnt.

Ain’t buying another MBP until Gates switches to Mac.
Reactions: obu90210, jblagden, ctrlshft and 9 others
Comment

I saw my 2.6 i7's CPU score on Cinebench drop significantly the first couple of days when hot, but it has seemed to stabilize in the range of 965 down to 880 or so.

As always, there are people that instantly write comments dismissing this and/or defending Apple. I really don’t see the need in doing so in this case.

For the past few years we’ve seen the BTO CPU throttle under load, in all MacBooks. With 8th gen chips, this is taken to another level and at a point where Apple need to sort it out. They skimp out on things as cheap as thermal paste, which could significantly improve the situation, along with the obvious re-engineering of the thermal situation. It really is inexcusable for Apple to have this solution. It’s yet another negative of the thinner MacBook Pro design.
Last edited: Jul 18, 2018
Reactions: AL1630, greenmeanie, ChinaRye and 45 others
Comment
You must log in or register to reply here.
Share:
Facebook Twitter Reddit Email Share Link
Register on MacRumors! This sidebar will go away, and you'll see fewer ads.
Sign Up
Top Bottom