What appears to be a legitimate benchmark of an iPhone 7 Plus with an A10 Fusion processor has been spotted on Geekbench, and its performance scores are impressive. The A10 Fusion in the iPhone 7 Plus outperforms all existing iOS devices equipped with A9 and A9X processors, including the iPhone 6s, the iPhone SE, and the 9.7 and 12.9-inch iPad Pro models. 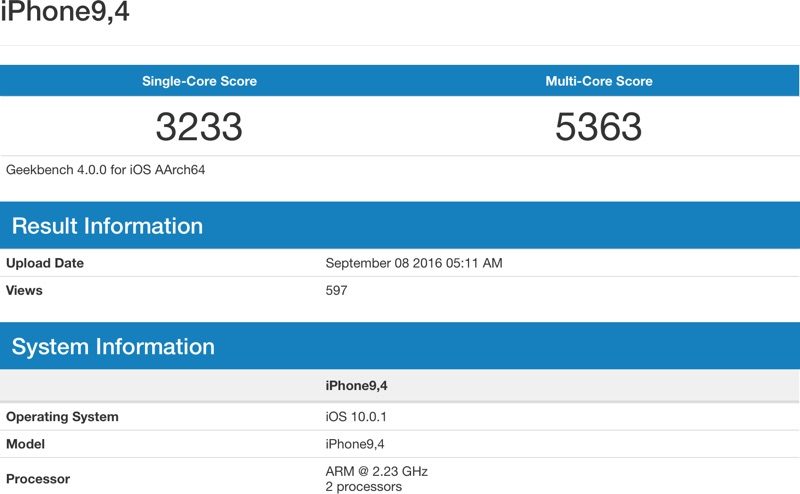 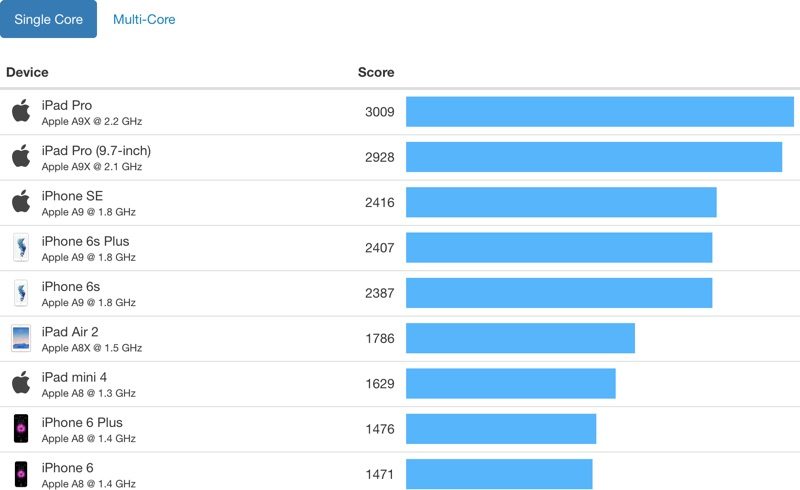 In marketing materials, Apple says the A10 Fusion chip is the most powerful chip ever in a smartphone, running two times faster than the iPhone 6 with graphics performance that's up to three times faster. In Geekbench tests, the iPhone 7 Plus did indeed double the performance of the iPhone 6 Plus on both multi and single-core tests.

Too bad there's literally no way to listen to music on this POS.

should they remove the "pro" moniker from the ipad if it's at the same level of a phone?
Reactions: Wackery, Rangertuf, vmistery and 9 others

Bbqthis said:
2 processors? So is that 2 processors with 2 cores each?
Click to expand...

I don't think all four CPU's will run at the same time. So yeah, effectively two separate CPU's. However, they could probably change that behavior in an update.

If this is indeed legitimate, it confirms that the iPhone 7 Plus has 3 GB of RAM.
Reactions: MareLuce, hank moody, duderman67 and 7 others

sputnikv said:
should they remove the "pro" moniker from the ipad if it's at the same level of a phone?
Click to expand...

I'd remove it for many reasons, but not for its processor. Also, there's kind of a Pro 2 on the way...
Reactions: appledefenceforce
A

it seems jail break is much much sexier now, i can use both on same time soon

My A9X iPad is super fast. Faster than that in a phone, driving fewer pixels? Awesome!
Reactions: GeeMillz22 and jamesrick80
T

Considering iOS 10 is pretty fast on the 6s, I'm excited for this.
Reactions: GeeMillz22

My Visa is already warmed up. Midnite is so far away.....
Reactions: GeeMillz22, decimortis and t1meless1nf1n1t

For reference Samsung Note 7 clocks in at 6000 on multi-core test.

Can't wait to see what an A10X looks like in the next iPad Pro.
Reactions: ShaunAFC3, GeeMillz22, appledefenceforce and 3 others

sputnikv said:
should they remove the "pro" moniker from the ipad if it's at the same level of a phone?
Click to expand...

My iPad Pro 12 inch has a score of 3231 and 5481 which is about the same or slightly better then the new iPhone 7
Reactions: ShaunAFC3, Synergie and jamesrick80
I

ryanmcv said:
If this is indeed legitimate, it confirms that the iPhone 7 Plus has 3 GB of RAM.
Click to expand...

Finally Apple ushers in quad-core. I'm sure non-gamers and non-pro-apps users will see much much better battery life because it'll be running on the lower powered cores most of the time.
Reactions: ShaunAFC3, iTom17 and Happy-Mac
C

I am legitimately excited for Chipworks to open this up.

Will be interesting to see the iPad Pro updated with A10X Fusion
Reactions: ShaunAFC3, Rastapopoulos, Jetcat3 and 3 others

It'd be cool if one could exclusively use the high efficiency cores for better battery life.
Reactions: GeeMillz22 and Coco Nuts
D

Richardgm said:
For reference Samsung Note 7 clocks in at 6000 on multi-core test.

And yet the Note 7 still gets trounced by the iPhone 6S.
Reactions: addamas, ShaunAFC3, Keane16 and 24 others
W

I have a 6. My instincts tell me to leave it on IOS9 and that 10 will choke my phone pretty badly. For those that have tested 10....opinions?

Edit: Thanks all for the input. And amazingly everyone seems to be on the same page, so I'll give 10 a shot.
Last edited: Sep 8, 2016
Reactions: ThaRuler

Its a bit meaningless as the 4 cores will virtually never all be pumping out full power - that's the whole point - supposed to be running minimally and cool where possible.
Reactions: ShaunAFC3
C

Consistent with what Phil Shiller said yesterday being 2X the performance of the iPhone 6. Actually better.
Reactions: ShaunAFC3

My 6s Plus and iPad 9.7" Pro are both so fast already that I find myself not totally frothing at the mouth for this. Sure I'll always take more speed, but for the first time ever, I'm not impatiently awaiting the speed upgrade. In fact, I'm asking myself if I'll even notice the additional performance. There is absolutely NOTHING slow about my current-gen devices.

And I've owned every iPhone since the 3G, and most prior generation iPads, and this was never true before. In comparison the iPhone 6 was kind of a dog, and the page and app reloads annoying. But not anymore with the A9/A9x.

The fact that Apple took it such a huge step further with the 10 is nuts in the best way possible. I love it. I also dig that they both boosted performance and efficiency with the lower powered cores. Nice move.
Reactions: ShaunAFC3, HEK, Jetcat3 and 5 others
C

At this point, these numbers (for any phone benchmark) are meaningless.
The real world observational differences in typical day to day use would be unnoticeable.

There was a time you'd see a difference, but over the last 5 years phones are so fast, no one will see any kind of difference.
Reactions: ShaunAFC3, GeeMillz22, Jimmy James and 6 others
You must log in or register to reply here.
Share:
Facebook Twitter Reddit Email Share Link
Register on MacRumors! This sidebar will go away, and you'll see fewer ads.
Sign Up
Top Bottom