All the MagSafe Accessories You Can Buy for iPhone 12

When Apple in October 2020 unveiled the iPhone 12 series – the iPhone 12, iPhone 12 mini, iPhone 12 Pro and iPhone 12 Pro Max – it revived the MagSafe brand to describe a brand-new magnetic charging system that's integrated into its latest handsets. All of the ‌iPhone 12‌ models have a ring of magnets built into the back and surrounding a wireless charging coil that affixes the handsets to MagSafe-compatible accessories. 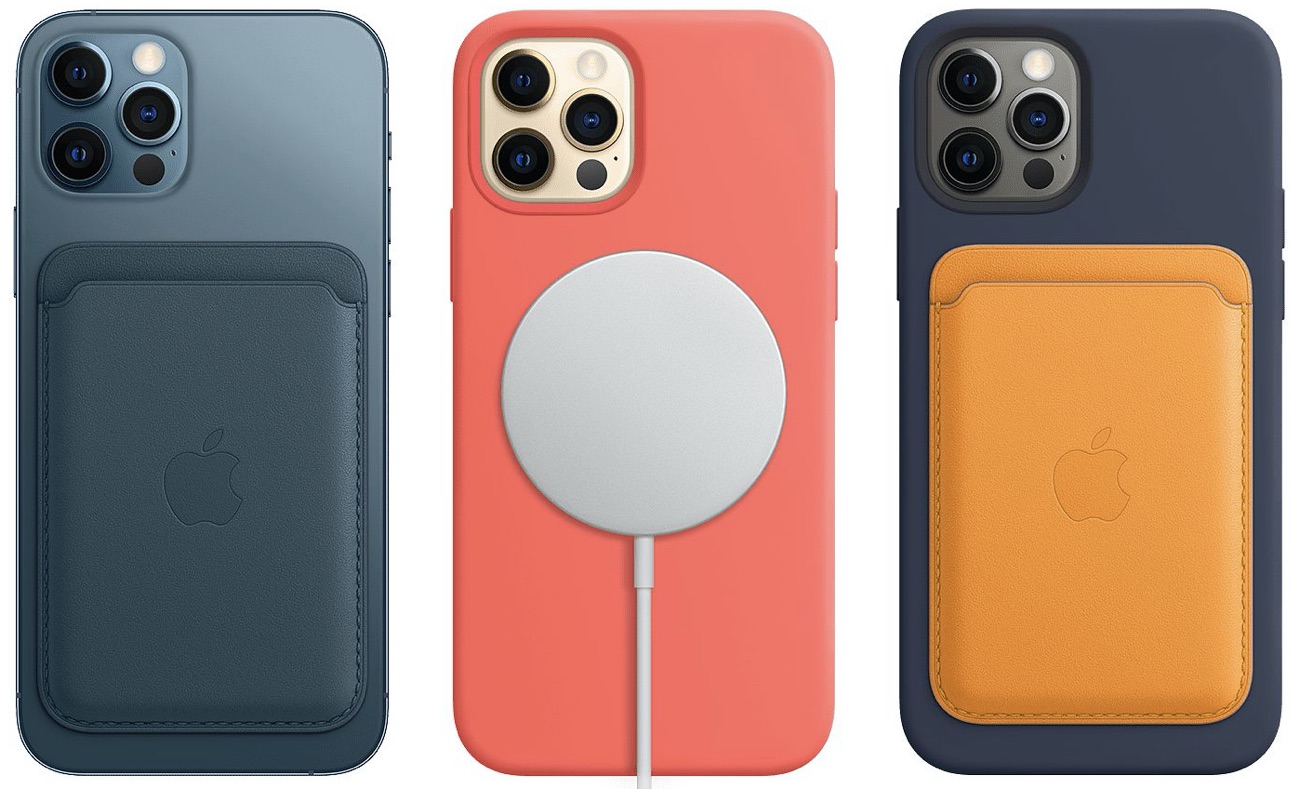 MagSafe accessories include Apple's own cases and chargers, but there are also an increasing number of third-party accessories that support MagSafe which are becoming available. In this regularly updated article, we round up all the current MagSafe options for iPhone 12 owners looking to take advantage of Apple's MagSafe technology. Read on to learn what's out there. 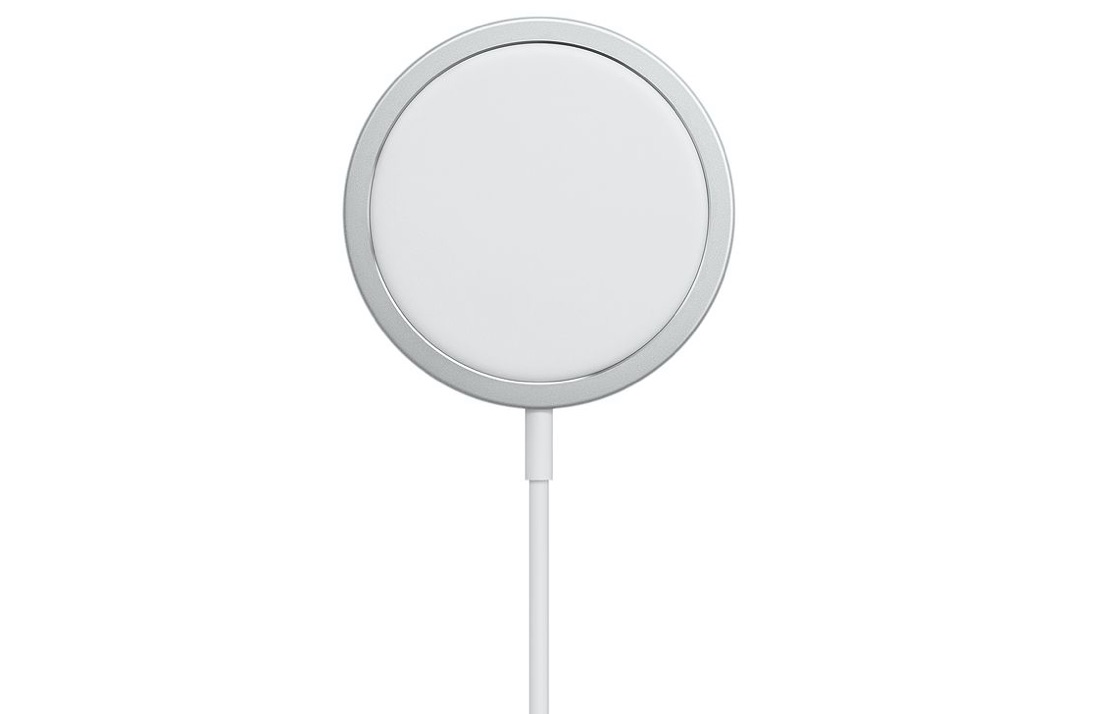 Apple unveiled this proprietary MagSafe Charger during its iPhone 12 event. Priced at $39, it comes with an integrated one-meter USB-C cable and charges iPhone 12 and iPhone 12 Pro up to 15W, which is double the power outage of a standard Qi-based wireless charging pad, meaning it can charge twice as fast.

There are a couple of caveats to consider before buying Apple's MagSafe Charger though. For one, it doesn't come with a power adapter, and it only charges at a full 15W if you use it with Apple's own 20W power adapter, which will set you back another $19. Second, while it's technically compatible with older iPhones, it's not a good idea to get one if you don't intend to use it with iPhone 12, because the charging speed with non-iPhone 12 devices is so slow.

Following the announcement of the iPhone 12 and iPhone 12 Pro, Apple introduced a new collection of cases with built-in magnets for MagSafe, starting with this Silicone case. Priced at $49.00, it features a soft-touch finish and fits snugly over the volume buttons, side button and curves of the device without adding heft. Available for all iPhone 12 models in Plum, Deep Navy, Kumquat, Cyprus Green, Pink Citrus, White, Black, and (PRODUCT)RED. 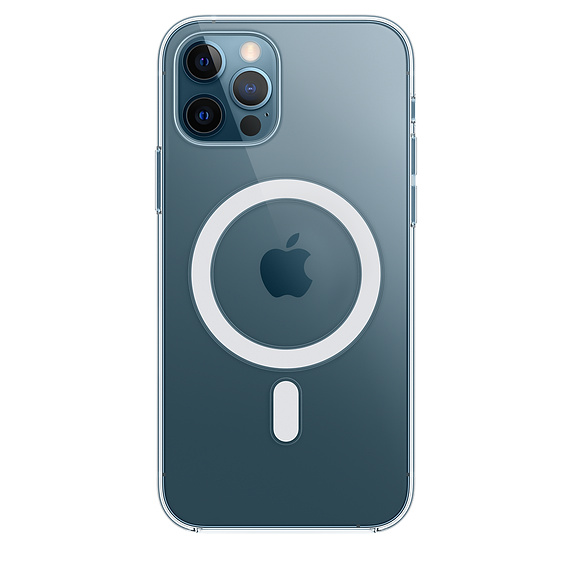 Apple offers its traditional clear case with magnets built-in to align your device with a MagSafe charger. It comes with a scratch-resistant coating on the interior and the exterior, and only the magnets are hidden behind the circular white imprint on the back of the case so as not to conceal the color and look of your new iPhone 12. Costs $49. 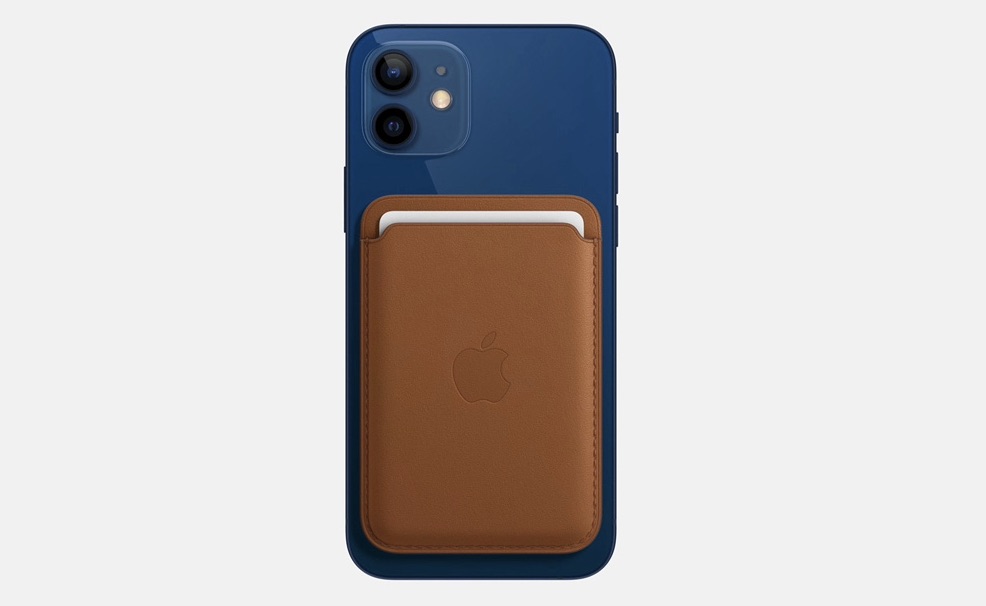 Apple offers this leather Wallet with built-in magnets for MagSafe compatibility, priced at $59.00. It comes in Baltic Blue, California Poppy, Saddle Brown, and Black. It holds your ID and credit cards on the back of your ‌iPhone 12‌, plus it's shielded so as to avoid affecting your bank cards. 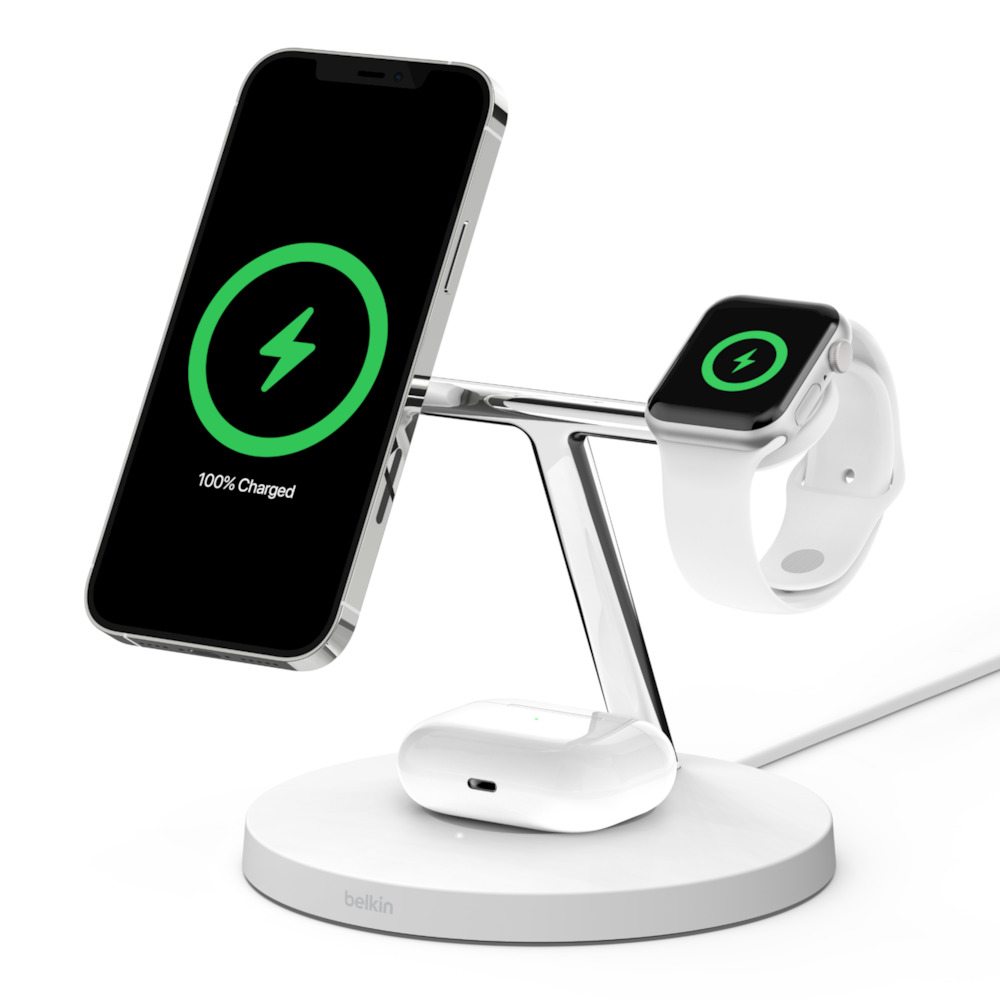 Belkin's BOOST↑CHARGE PRO MagSafe 3-in-1 Wireless Charger includes a flat base with a 5-watt wireless charging spot for ‌AirPods‌ or AirPods Pro, and a chrome stand portion with two arms for charging an ‌iPhone‌ and an Apple Watch.

As with other MagSafe chargers, up to 15 watts of power can be delivered to an ‌iPhone‌ 12, which is twice that supported through regular Qi charging. Belkin says the 3-in-1 charger will be available "winter 2020" for $149.99, and it will come in black and white versions. 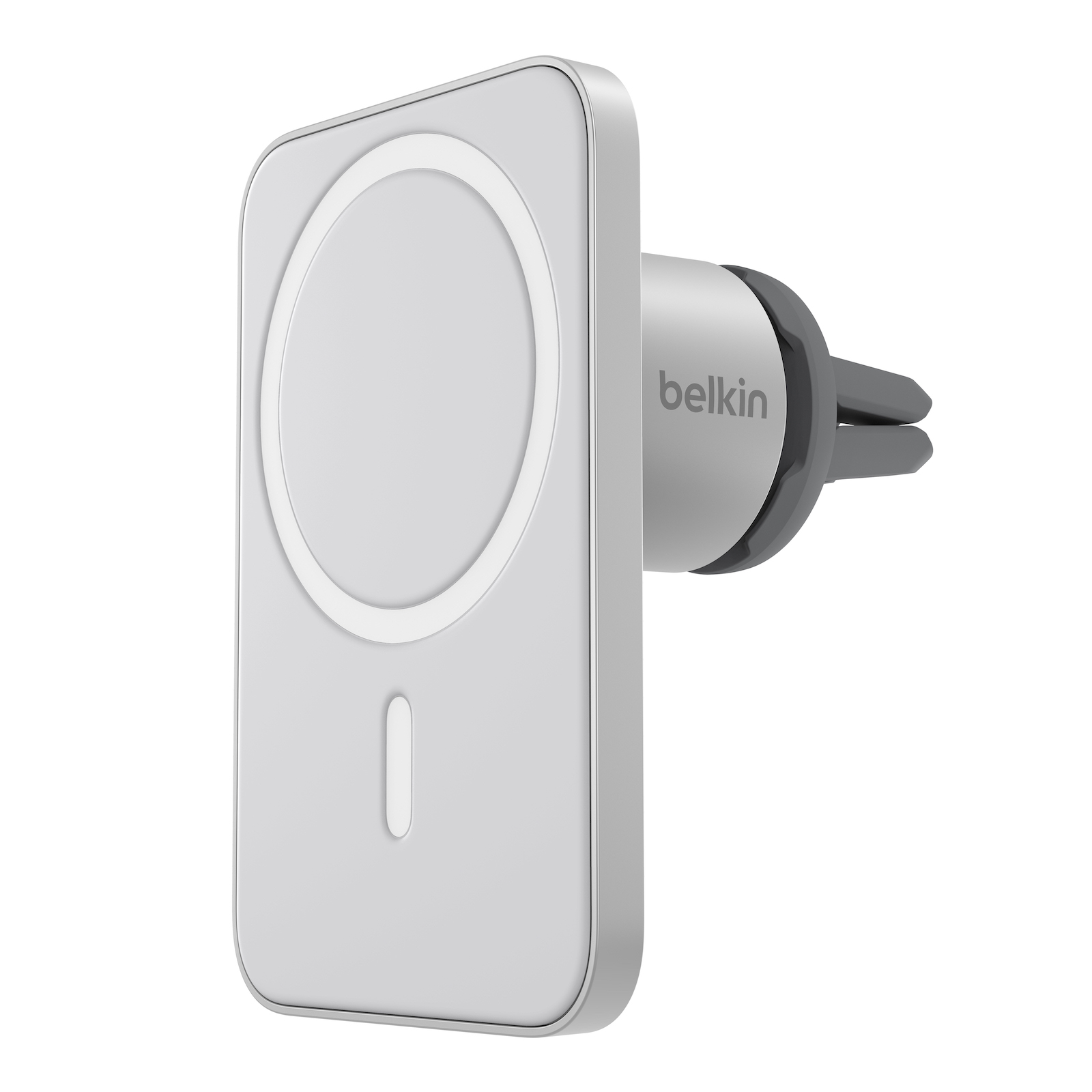 For traveling in your car, Belkin is introducing MagSafe Car Vent PRO, which offers a slim profile and multiple orientations to easily snap your ‌iPhone‌ into place.

The Car Vent PRO is just a mount and doesn't include any charging capabilities of its own, but Belkin says it offers convenient cable management in the back so your charging cable can be kept close at hand. As with the 3-in-1 desktop charger, the car mount will be available this winter, and will be priced at $39.95.

Otterbox was one of the first third-party manufacturers to announce iPhone 12 cases with MagSafe support. Priced at $49.95, the Figura case comes in several watercolor-inspired designs and each one is made from a soft-touch material for a comfortable grip. 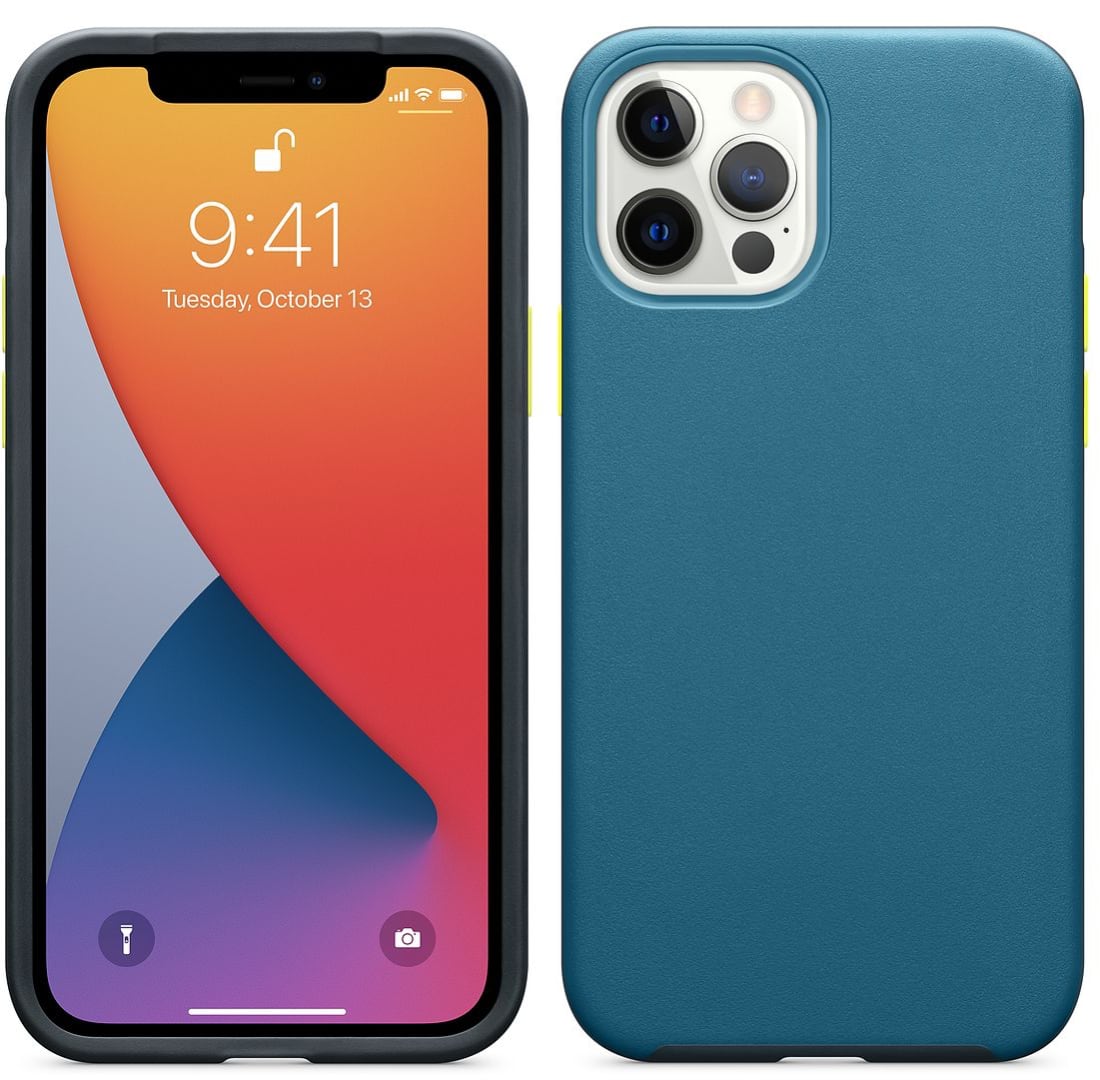 Otterbox's Aneu series of slim cases for iPhone 12 come in more muted color options compared to the Figura, but they have raised screen bumpers with a grippy edge for added protection. Priced at $49.95. Available in Marsupial Beige/Teal, Pink Robin, Black Licorice, and Blue Heeler.

Like the Aneu and Figura, the Series+ from Otterbox are slim MagSafe-compatible cases, but they feature in addition a more protective design with DROP+ technology. They are also infused with a silver-based additive that blocks microbial growth and protects against common bacteria. The Series+ cases cost $59.95 and are available in Black, Navy Captain Blue, Spring Snow Beige, and Tea Petal Pink. 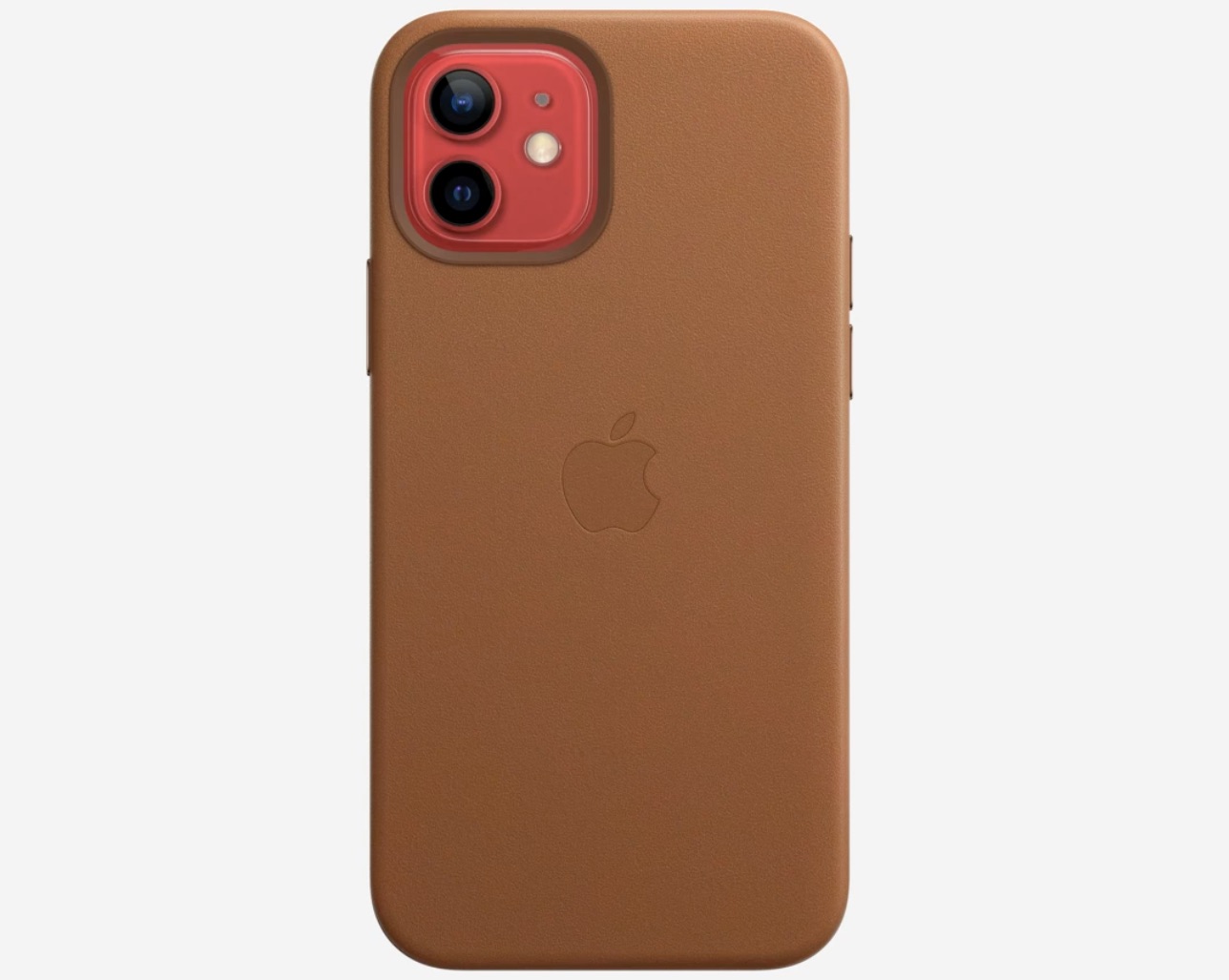 Apple unveiled MagSafe leather cases during its iPhone 12 event, and released them later in November on November 6. The new Leather cases are basically Apple's traditional offering with the addition of built-in MagSafe magnets, and they're priced at $59. 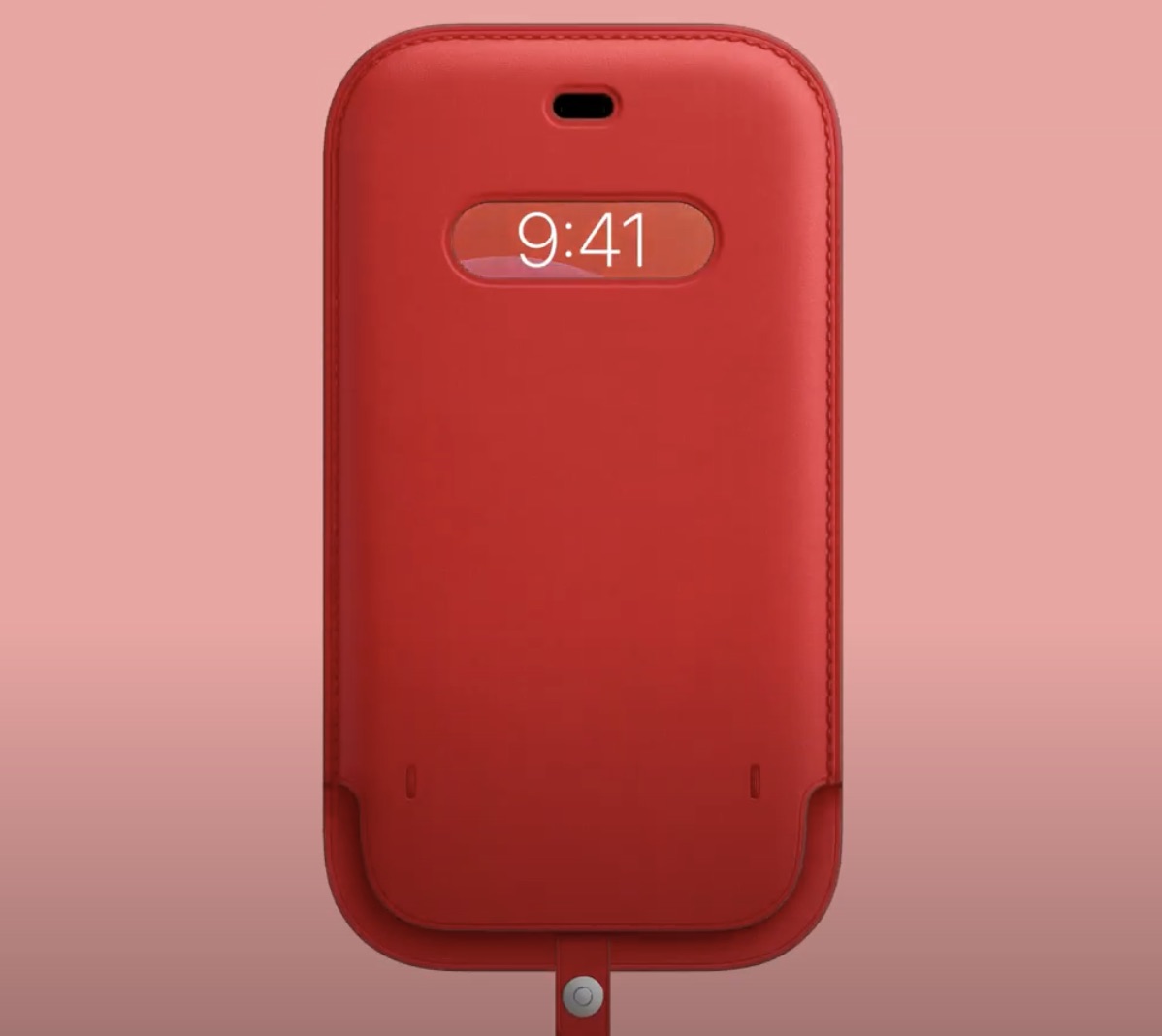 In addition to the MagSafe variant of its traditional leather iPhone case, Apple is also launching a new Leather Sleeve for iPhone 12 that has a screen window for the time to show through. The Leather Sleeve is priced at $129. 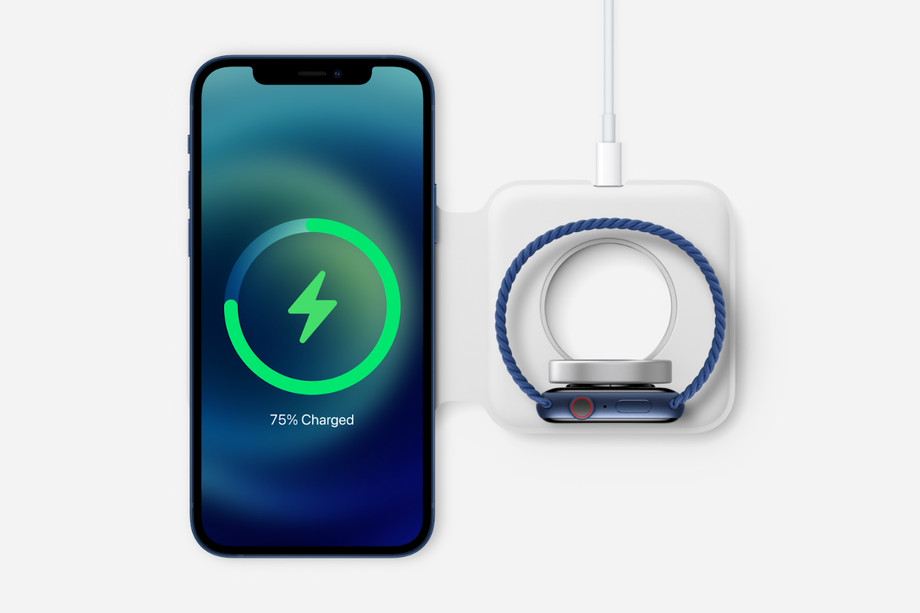 Another MagSafe accessory that Apple announced during its iPhone 12 event is the MagSafe Duo, which is vaguely reminiscent of Apple's canceled AirPower charging mat. It has space enough to charge both an ‌iPhone 12‌ and Apple Watch (but not AirPods). Apple didn't provide a release date or price for the charging pad, and it's not yet listed on Apple's online store. All we have is this press release saying that it will be arriving at a "later date."

Note: MacRumors is an affiliate partner with some of these vendors. When you click a link and make a purchase, we may receive a small payment, which helps us keep the site running.

Article Link: All the MagSafe Accessories You Can Buy for iPhone 12

Edit: on a second thought, there should be a f in front of ugly.
Reactions: duanepatrick, Dino F, kcslc and 6 others
H

Also the design of the Apple clear case is an abomination
Last edited: Oct 28, 2020
Reactions: TropN, MrFootery, SDJim and 1 other person

If the silicone cases have creeped up to $50, I’m guessing the leather cases are probably gonna be $70. 😒
Reactions: kcslc

Frankly I'm kinda "meh" over MagSafe at this point.

I'm not entirely sure just what problem the system is supposed to solve?
Reactions: johnmed, Pagemakers, VaruLV and 14 others

I won't be surprised if the leather sleeve isn't offered for next year's phones.
Reactions: 123, MrFootery and decypher44 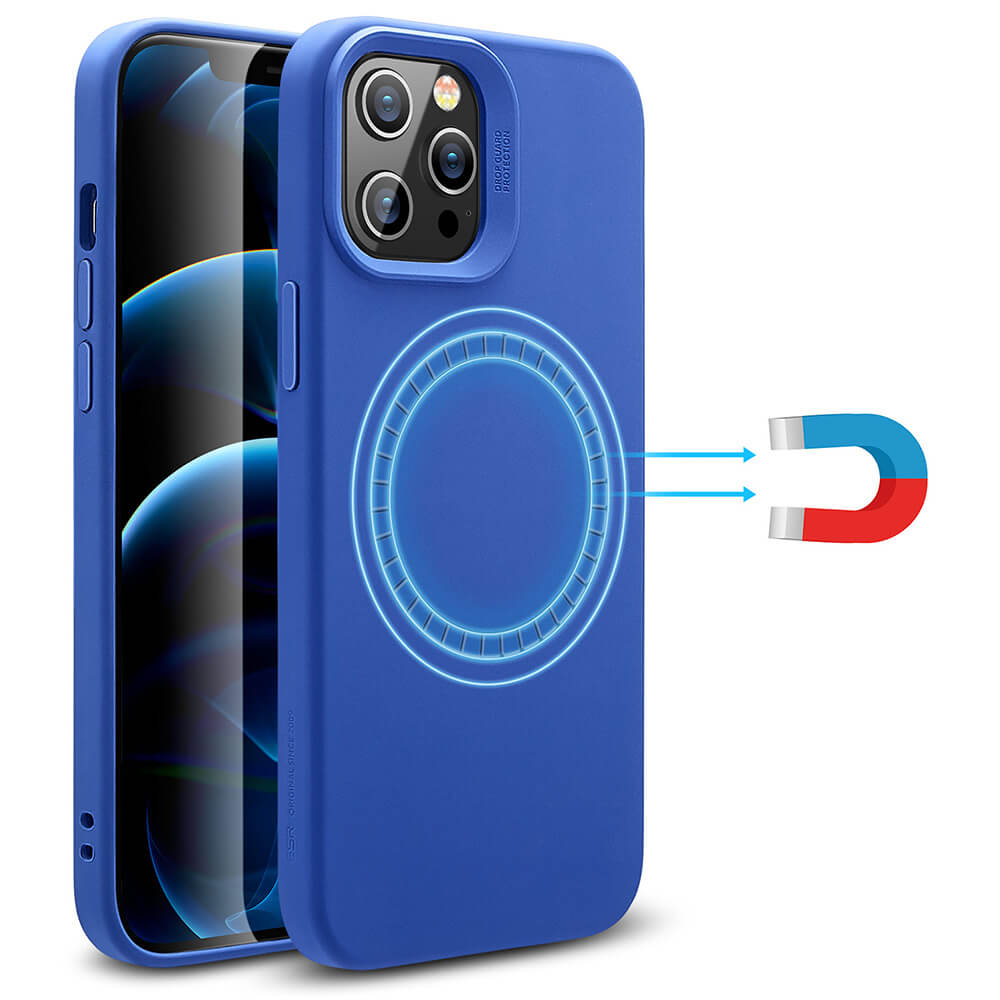 $40 for that Belkin car mount? There'll be a just-as-good knockoff for $10 before that even hits the market.
Reactions: CE3, HouseofG, MrFootery and 5 others
A

I really liked magsafe much more when it was useful, like for macbook power. I wonder if they can do something like that again
Reactions: CE3, 123, sideshowuniqueuser and 5 others

Got the silicon case and it fits amazing, I’m so glad Apple went back to their roots with the square edges!
Reactions: 19callum93
M

I thought someone debunked the requirement for apples power adapter. The previous article the person doing the tests didn’t use 9V PD supported adapters. Macrumors needs to do their own test with many more adapters.
Reactions: MrFootery

Now I finally understand what all the Apple Campuses are for.. I'm going to need college courses to teach me what the hell all these accessories do now since instead of headphones and a lightning cable I have to buy a circular magnetic wallet pocket dongly pop-sockety auto-charging hologram thing.
Reactions: johnnytravels, 123 and MrFootery

That giant MagSafe icon on the back of the clear case is hideous. I like the concept of the Mag Duo, but my Anker does the same thing right now. I don't need to see my phone at night, just tap on the watch if I wake up. I wish ESR sold a bumper like they did for the X/XS. Cheap and somewhat flimsy, but it saved my X so many times from many different levels of drop. Face down, face up, right on its side, outside on concrete, inside on tile....it just worked.
Reactions: JuneJune and HouseofG

deeddawg said:
I'm not entirely sure just what problem the system is supposed to solve?
Click to expand...

The problem is pesky regulators will eventually force everyone to abide by the same charging plug standard, and Apple wants to maintain a proprietary standard to generate licensing revenue (MFI program). If/when those regulators require all charging ports to be USB-C, Apple will just get rid of the port altogether and rely exclusively on their proprietary portless solution MagSafe.
Reactions: 123 and MrFootery
M

I'm not entirely sure just what problem the system is supposed to solve?
Click to expand...

It’s solving the problem of replacing the Lightning cable. Instead of switching to USB-C, I could see Apple having no charging port at all on future iPhones and just using the MagSafe charger.
Reactions: MrFootery and Mr. Awesome

I wonder if the leather sleeve will be available for the mini as well. I usually get the Apple leather case. However, I may make an exception.

I'm not entirely sure just what problem the system is supposed to solve?
Click to expand...

Agreed, just a gimmick, worse, it only fast charges with Apple's own 20 Watt charger and maybe a few more, I saw one poster here that claimed his third party charger did charge the iPhone 12 with 15 watts, I have my doubts, so you still need an environment unfriendly...Look at you Apple...Apple charger.
Reactions: compwiz1202

Why are there no third-party Wallets

MR, you forgot one other accessory. The 20W charging brick. According to your article yesterday, Magsafe doesn't work to it's full potential without it. So much for all those charging bricks iPhone users supposedly have lying around. /s
Reactions: kcslc
Y

MagSafe aka the Crystal Skull, soiling cherished memories of a once great product/franchise.
Last edited: Oct 28, 2020
Reactions: 123, SDJim and decypher44

Hoping pro max cases become available before the 13th
A

I suspect ESR's HaloLock products (in addition to case, there's the car mount) because they're not officially MagSafe products (which I assume have to be approved by Apple through a process like MFI) - they are proprietary products compatible with MagSafe.

Also, the Belkin Car Mount would be so much more appealing if it could charge. Hopefully they or someone else will make a charging MagSafe car mount.

Agree, the visible MagSafe on the clear Apple case is gross. I don't know that Jony or Steve would have let that one through.
Reactions: MartialEagle
R

Edit: on a second thought, there should be a f in front of ugly.
Click to expand...