Apple has added banners to its United States website and iTunes Store in an effort to encourage its customers to donate to those affected by Hurricane Harvey. 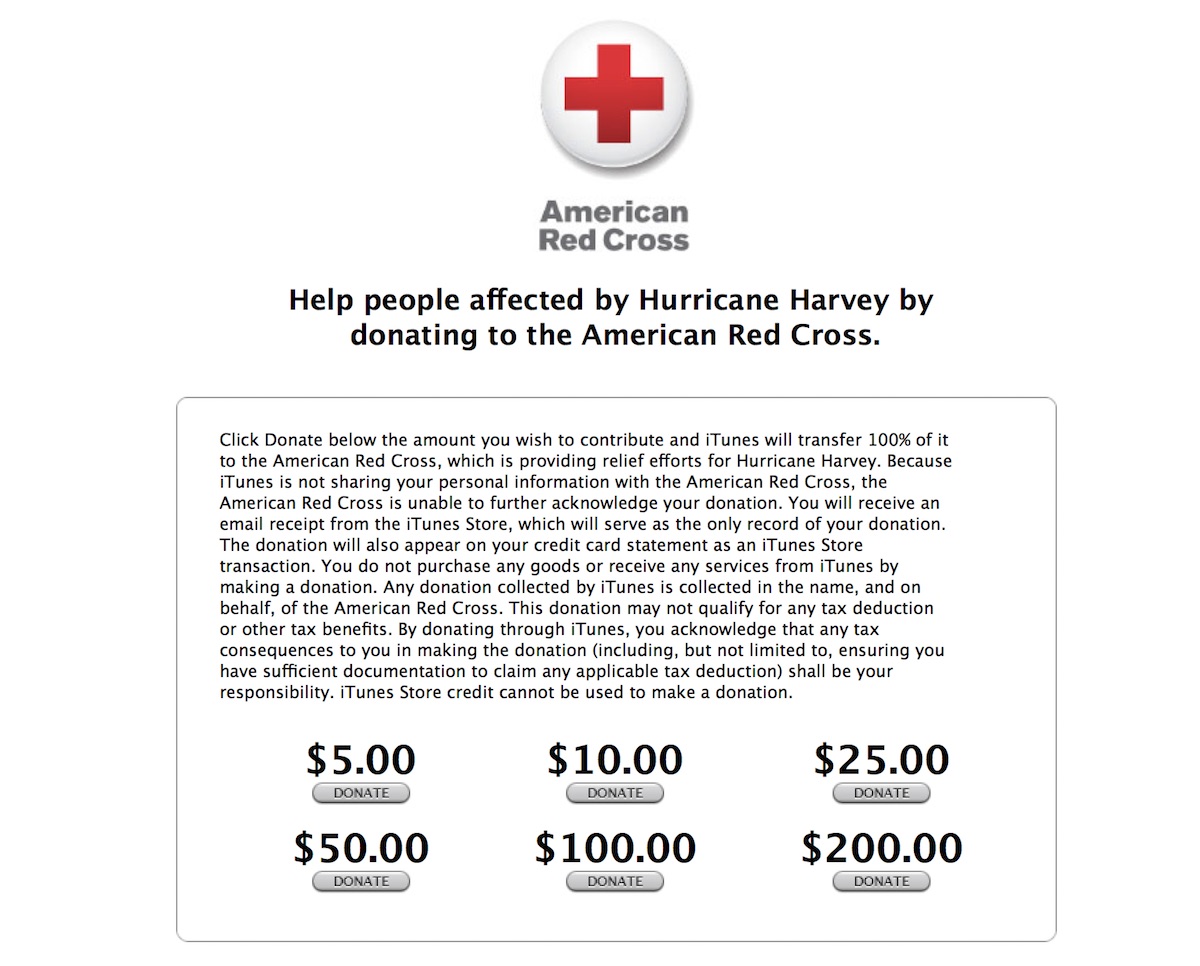 Similar to past relief efforts, users can choose to donate $5, $10, $25, $50, $100, or $200, and Apple will transfer 100 percent of the proceeds to the American Red Cross, which is providing relief efforts for people in the path of Hurricane Harvey. All donations will be processed as normal iTunes purchases through a connected Apple ID.

Apple CEO Tim Cook tweeted about the donations early this morning, as rescue workers in Houston and other parts of southeast Texas attempt to help residents trapped in their homes by "catastrophic flooding." Harvey made landfall late Friday night as a Category 4 hurricane and has since been downgraded to a tropical storm, which is expected to stay in the region over the next few days.

Prayers for Texas and all those affected by #HurricaneHarvey. Join us in the relief effort by donating: https://t.co/QLBMFOjaDG - Tim Cook (@tim_cook) August 27, 2017
Click to expand...

Apple is known to create donation pages across its various storefronts in the wake of natural disasters. In the past, Apple has collected Red Cross relief funds for the British Columbia Wildfire, Hurricane Matthew, the 2016 Louisiana floods, the 2015 Nepal earthquake, and many more.

Before I donate, anyone know ther percentage the Red Cross actually gives out of every dollar?
Reactions: Bako-MacAddict, potentmf, freezelighter and 11 others
D

I don't trust the Red Cross no thanks. It will go into the pocketbook of the CEO probably.
Reactions: mgauss7, Saturn007, tonyr6 and 15 others
S

From the Red Cross website, its states 91 cents from every dollar. The remaining goes towards daily operations. http://www.redcross.org/faq/#-Financial-Donations This of course is what they state how its used.
Reactions: mgauss7, DEXTERITY and ILikeAllOS
S

Red Cross is pretty good, not perfect at 90%: https://www.charitynavigator.org/index.cfm?bay=search.summary&orgid=3277

That said, for a massive effort like this, the infrastructure of a huge charity like Red Cross is valuable.
Reactions: pianophile, tennisproha, CarlJ and 10 others
D

They say that one is lucky if 50% of the money one donates gets to the cause. That is why I prefer to donate "stuff" instead of cash.
Reactions: Saturn007, Michaelgtrusa, btrach144 and 5 others

Donated directly to non profit organization. No need to donate to rc.
Reactions: ackmondual, Saturn007, tonyr6 and 10 others

Ok but does the donor certificate come in space grey?
Reactions: ackmondual, SlowX, nburwell and 7 others

DotCom2 said:
They say that one is lucky if 50% of the money one donates gets to the cause. That is why I prefer to donate "stuff" instead of cash.
Click to expand...

This isn't a foolproof method either. For one, it's hard to be sure whether 'stuff' gets to the people who need it most just like with cash resources, unless you're hand-delivering it to someone in need. For another, an organization has a better idea of what's urgently needed *now*, and money is a more flexible donation in serving changing needs.
Reactions: DEXTERITY, ohbrilliance, triptolemus and 2 others
S

No thanks, we already paid too much tax.
Reactions: Avieshek
N

Thanks for the help. I can’t describe how devastating the flooding is in Houston. Most went to bed last night thinking we survived Harvey just fine but then it started raining. So a lot of us were surprised to find water in our houses when we woke up! Some one posted we got a years worth in 24 hours!
Reactions: potentmf, ellsworth, pat500000 and 9 others

At least you'll be certain that 100% of it goes to support dictators, oligarchies, luxury yachts, & millionaires.

There won't be any question there.
Reactions: winston1236, ksnell, EvilEvil and 6 others

didn't Texas people had enough time to evacuate its a no from me
Reactions: Ad13, Huck, Avieshek and 1 other person

I know from one disaster event in Japan where money was collected here in Austria, and I know from first hand that not one cent arrived in Japan.

For such disaster events here in Austria (Europe) the Austrian government does all the work, financing and management. No donations needed. I love my government for this. I don't see why privately held organizations should manage such events, it's just a big money machine tricking the gullible good hearted people. After all why do we pay up to 50% taxes???
Reactions: Saturn007, edvj, EvilEvil and 2 others
T

Exactly. We're hurting down here in Houston and the Red Cross has already been able to set up at least one shelter at a local high school. I know there are better charities out there, but down here we just can't be too picky right now. It's already the worst flooding event in Houston's modern history, and we have several more days of heavy rain to go.
Reactions: zsbradt, pianophile, ellsworth and 4 others
B

Not sure about the percentage of donations going to the actual cause but I know every time I see a report about a fire or other emergency affecting people there are Red Cross people on the scene offering help.....

A donation to the Red Cross is probably better than donating money to one of the Mega Churches.

Looks like 89% all those donations from Apple to the SPLC fo towards fundraising and administration. Only 11% go towards defending people.
The Red Cross looks like a better investment.
Reactions: t76turbo, Arran, vmistery and 4 others

So, Collecting donations is a business now.
Reactions: ackmondual, MorganHiller and pat500000

Apple's use of the American Red Cross is as outdated as their use of GUI elements from 2003 in this graphic.
Reactions: ackmondual, btrach144 and Zwhaler
J

You can Google how much their CEO make and the benefits he/she received. It's unbelievable such an organization like this paying people that much money. While some or their workers are just volunteers being undermined by the system.
Reactions: Saturn007, MorganHiller, jw2002 and 3 others
0

Charity Navigator is a good place to research organizations. They'll likely have a list for Harvey related orgs up soon.