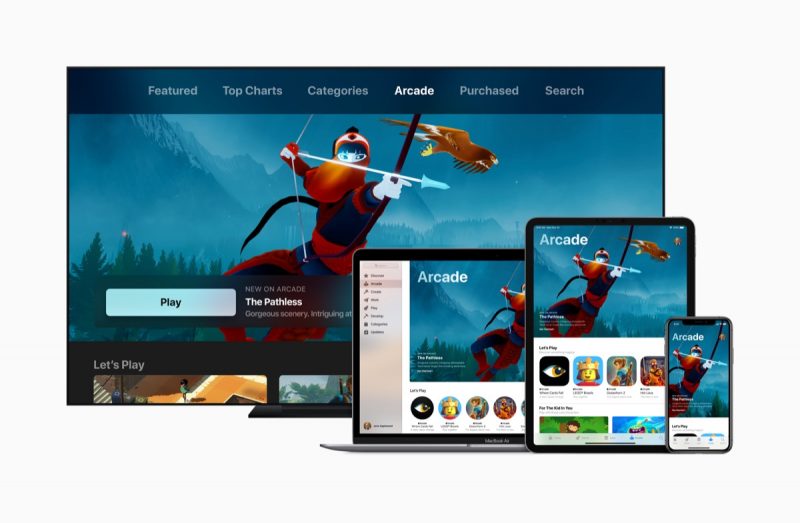 A subscription to Apple Arcade includes access to over 100 new and exclusive games that can be played both online and offline across iPhone, iPad, Mac, and Apple TV, and the whole family can play using Family Sharing with one subscription fee.

Apple Arcade will have a dedicated tab on the App Store, and games will be curated by Apple's team of App Store editors. Apple says the emphasis will be on personalized recommendations, and Apple promises that Apple Arcade games cannot collect any data about the user without consent.


All Apple Arcade games will be all-you-can-play experiences, with all features, content, and updates included at no extra charge, and with no ads or in-app purchases necessary.

"The App Store is the world's biggest and most successful game platform. Now we are going to take games even further with Apple Arcade, the first game subscription service for mobile, desktop and the living room," said Phil Schiller, Apple's senior vice president of Worldwide Marketing. "We are working with some of the most innovative game developers in the world to create over 100 new and exclusive games to play across iPhone, iPad, Mac and Apple TV. Apple Arcade games will be great for families, respect user privacy and will not have ads or require any additional purchases. We think players of all ages are going to love Apple Arcade."
Click to expand...

Apple Arcade will launch in fall 2019 in more than 150 countries across iOS, macOS and tvOS. Apple is asking developers interested in being considered for Apple Arcade to visit developer.apple.com/apple-arcade.

I’m a simple man. No Flappy Bird, no buy.
Reactions: e1me5, freedomlinux, max.ine and 9 others
T

On iPhone, iPad, tv and Mac this fall. Screams Marzipan.
Reactions: ILikeAllOS, phocion, ZZ9pluralZalpha and 4 others

Meh... this is another insult for Mac users, for me. So, they just downgraded the gaming on Mac to mobile level.
Why should I trust Apple for gaming?? They never offered top gpu options to play games properly and macOS was always behind Windows when it comes to optimization for games.
Last edited: Mar 25, 2019
Reactions: Polpol1, Pahanda, Horselover Fat and 22 others

Cook wants us to pay him $100+ per month to use our devices. Sad!
Reactions: ILikeAllOS, NIKKG, cb3 and 1 other person

Without World of Warcraft, gaming on Mac has already been in the graveyard level.
Reactions: pratikindia, AvisDeene and Bokito

Or upgraded the gaming on iOS to desktop level!
Reactions: Classie, ILikeAllOS, max.ine and 6 others

What? There are literally no games for macOS. It’s the ********* platform on earth for gaming, even Linux is better. Having access to iOS games that have been adapted to macOS will be awesome.
Reactions: IRockThat828pScreen and Kengineer
C

"Stay a while, staaaaaay forever."

(Topical gaming reference for the older gen there)
Reactions: Cameroncafe10a, danmart, Bostic and 13 others

keysofanxiety said:
Or upgraded the gaming on iOS to desktop level!
Click to expand...

Not happening as long as touch interfaces remain the main input, or worse, AppleTV remotes... Fumbling with touch-sensitive controls in general will just never compare to a proper controller or mouse & keyboard.
Reactions: freedomlinux, Feyl, aylk and 1 other person
K

So macs with Ax CPUs are coming this fall...
Reactions: AmazingTechGeek

This is great. All new and exclusive games. Apple is giving opportunity to indie developers that would struggle to produce these games. Being able to play them across all Apple devices is excellent.
Reactions: IRockThat828pScreen, Menneisyys2, Kengineer and 3 others
S

Totemsflare said:
This is great. All new and exclusive games. Apple is giving opportunity to indie developers that would struggle to produce these games. Being able to play them across all Apple devices is excellent.
Click to expand...

Erm.....ID@Xbox & PlayStation Indies have been supporting indie developers to produce exclusive and cross platform for years. This is nothing new.
Reactions: eulslix, pratikindia, aylk and 2 others

A flop in the making. Back to 8 bit gaming on my $2600 MacBook LOL.
Reactions: derekamoss, Polpol1, pratikindia and 5 others

Sparkie_e said:
Erm.....ID@Xbox & PlayStation Indies have been supporting indie developers to produce exclusive and cross platform for years. This is nothing new.
Click to expand...

I never said they Apple was the first one. Just that they’re helping indie developers working for mobile devices.
[doublepost=1553538216][/doublepost]

If you’re looking for a AAA first person shooter I wonder why you bought a Mac in the first place.
Reactions: PJivan, Saipher and PS4DailyLove

johannnn said:
What? There are literally no games for macOS. It’s the ********* platform on earth for gaming, even Linux is better.
Click to expand...

Are you drunk or something? There are more than 20,000 games for Mac on Steam alone, including super popular titles like Counter-Strike or Rocket League. Linux has just about 12,000. Plus, with Fortnite, one of the most popular games at the moment is available for Mac, but not for Linux.
Reactions: IGI2, Colonel Blimp, JTBing and 8 others

I get this is a services event, but this would have been the perfect time to announce a controller that has all of the connection niceness of the new H1-powered AirPods. More than headphones, I can see a use for moving between devices - e.g. start a game in your lounge on your Apple TV, move to your iMac when the TV is in demand.
Reactions: cdpage, Commodore 64, ILikeAllOS and 1 other person
C

Or you can buy an AAA game published a few years ago for $5 on Steam and play it forever on your PC.
Reactions: Polpol1, Horselover Fat, freedomlinux and 6 others

kidaje said:
So macs with Ax CPUs are coming this fall...
Click to expand...

Right. Else, I’m not sure why Apple would promote cross-processor development.
C

I’m all for it for the kiddo but no pricing announcement makes me think they’re wanting too much.
Reactions: joy.757, Jstuts5797 and TrowaNY
K

Paid games on mobile aren't successful because they're mostly made just like crappy free to play games with in app purchases but the developer had the audacity to charge an extra bit on top.

What's left is mostly wasted because of the crappy controller situation. Now if they announced they were opening up controller support for all the popular third party controllers & building a controller layout profile system right into iOS like steams controller API, Bringing back game centre as a unified cross game overlay that makes use of the space iPad/Apple TV offer and that they were actually allowing the steam link app onto the app store then we'd be getting somewhere.

Gaming would be far more attractive on iOS if i could drop my phone/iPad into a dock or turn on an apple TV, Grab a DS4/xBox,Switch Pro controller I already own and play the damn thing on the TV.
Reactions: mi7chy and ondert

"Stay a while, staaaaaay forever."

(Topical gaming reference for the older gen there)
Click to expand...

You get a thumbs up simply for the reference. I feel sad when my non gaming wife never gets that reference.
Reactions: CarpalMac
L

Xbox game pass is 10$ a month and an xbox is cheaper than any apple device lol, what was Apple thinking?
Reactions: derekamoss, Caseynd, ILikeAllOS and 7 others
You must log in or register to reply here.
Share:
Facebook Twitter Reddit Email Share Link
Register on MacRumors! This sidebar will go away, and you'll see fewer ads.
Sign Up
Top Bottom