Apple today announced the iPad mini 4 at its "Hey Siri" media event in San Francisco. The tablet is virtually a 7.9-inch version of the iPad Air 2 and is 6.1mm in thickness, which is 18% thinner than the previous generation. The tablet also weighs just 0.65 pounds with a 30% faster CPU and 60% faster graphics than the iPad Mini 3. 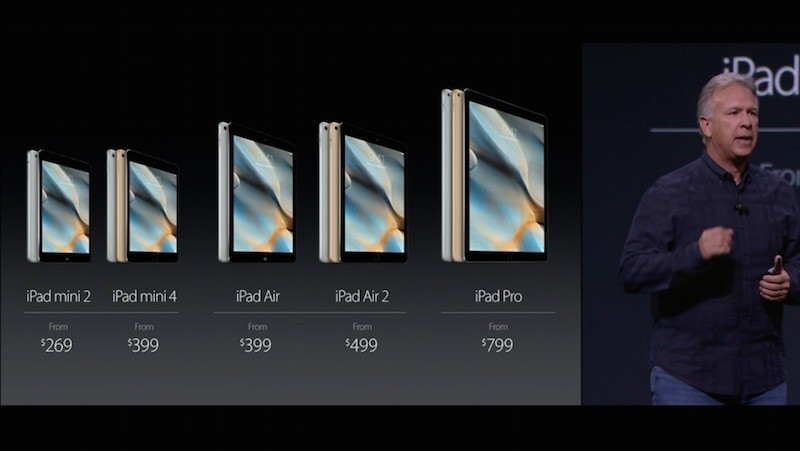 The new tablet also has all of the expected improvements in its camera, with advanced optics, an improved sensor, and an Apple-designed image signal processor. The iPad Mini 4 includes Touch ID and uses new iOS 9 features like Slide Over, Split View, and Picture in Picture to provide users with a more robust and economical mobile experience.

iPad mini continues to get no love from Apple. None.
Reactions: AleXXXa, realeric, BrandonHacks and 4 others
R

What are the specs? Does it have an anti-reflective screen coating? Is it thinner than the iPad mini 3?

Wonder what the storage capacity is on the base model.
M

May be interested if it fits my magpul cases. Other wise I'll stick with what I have.
Reactions: enthusiastic

If the resolution & color gamut are fixed, great. I wonder if it also has 2GB of Ram? That would get me to look at it more seriously.
Reactions: AleXXXa, groundcontrol, nealh and 1 other person

If Apple says a shrunk down iPad Air 2, it will have the A8 in it. I seriously doubt an A8X would even work in such a tiny device.
Reactions: AleXXXa
R

I'm starting to think they have too many products. Should be 1 mini, 1 Air and 1 Pro. This is plain confusing. Similar issue with the MacBook lineup.

I have to wonder if Apple will try to unify their OS's like Windows did (or is doing) at some point.
R

Thanks for the resolution specs on the iPad Mini 4 Moolani. That changes things, but if it's still 1gb of RAM I'll probably skip.
Last edited: Sep 9, 2015
Reactions: vanzantapple
J


And too many presenters. The ___ has "desktop class blah, blah, blah"... I get it, we don't need reps from so many apps up there playing a game or shopping.
Reactions: patjem

The article says that it is the same as the previous Mini retina screens: 2048x1536
Reactions: tirk and DoctorKrabs
C

The clock on the wall says three o'clock.

One burbon, one scotch and one beer!
Reactions: Bananas Ananas

Great Galaxy ! Who in their right mine would spend 800 dollars on an iPad ? Might as well save a few more and get a MacBook.

I see the value! After owning the rMB , the Pro is just what I want!

In other news, does anyone know where I can get those Wallpapers

That's not even the resolution of the current iPad Mini, so why would the new one revert to that?

I don't understand why the iPad Mini 2 is the budget model they kept instead of the iPad Mini 3. They could have had TouchID across their entire iOS lineup.
Reactions: SockRolid and redscull
M

I see the Mini being discontinued next year as rumored. I think they really want to focus on the bigger iPads and now the new Pro.

When I first got my Mini, everyone said "why do you want one so small?!". The Mini's were popular, but I think most still probably prefer the iPad Air form factor, and I think Apple knows that.

I plan on getting a Mini 4, as I don't see them continuing on after this year and while my Mini 2 works ok, it could use a bit of a boost for iOS 9. After that, I guess I'll have to get used to a bigger iPad.

Google made a similar move by ditching the Nexus 7 form factor for the Nexus 9. I think the mini tablets aren't the focus anymore, and it's back to big tablets. Partly probably due to phones being so big ala the iPhone "" Plus that it makes a mini tablet not as necessary.
J

Totally agree since the ONLY change from 2 to 3 was touch. Apple is just a mess here with very confusing product line up.

On Apple website the chip in the mini 4 is the 8, while the air 2 has the 8x. If that is true, that means its not the power of the Air 2. And that means they are kind of full of crap.
Reactions: vanzantapple
You must log in or register to reply here.
Share:
Facebook Twitter Reddit Email Share Link
Register on MacRumors! This sidebar will go away, and you'll see fewer ads.
Sign Up
Top Bottom