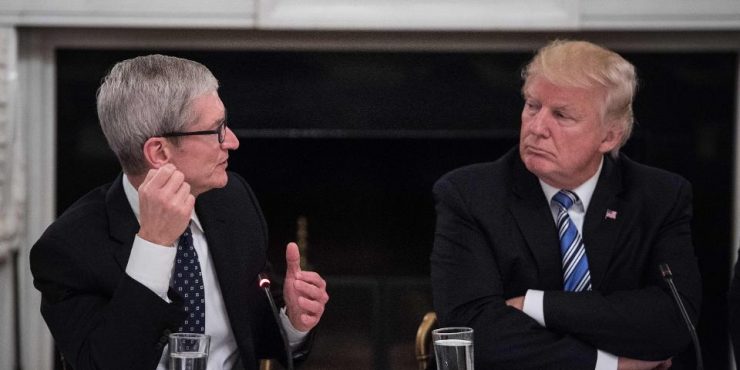 The coalition's letter to help "Dreamers" will be featured in a full-page ad in The New York Times today. The term Dreamers refers to individuals who were brought to the United States at a young age when their parents or guardians illegally immigrated into the country. Under the Deferred Action for Childhood Arrivals (DACA) program, these people are protected and can gain legal work status in the United States.

"With the re-opening of the federal government and the presumptive restart of immigration and border security negotiations, now is the time for Congress to pass a law to provide Dreamers the certainty they need. These are our friends, neighbors, and coworkers, and they should not have to wait for court cases to be decided to determine their fate when Congress can act now," they wrote in the letter.

"We have seen time and again that the overwhelming majority of Americans of all political backgrounds agree that we should protect Dreamers from deportation," the letter said. "American employers and hundreds of thousands of Dreamers are counting on you to pass bipartisan, permanent legislative protection for Dreamers without further delay."
Click to expand...

Apple and Tim Cook have been supporting DACA for years, and Cook began writing letters in support of the Dreamers in 2017, after President Donald Trump announced his original plan to phase out DACA over the course of six months. At the time, Cook said that 250 Apple employees are Dreamers: "I stand with them. They deserve our respect as equals and a solution rooted in American values."

In early 2018, Cook joined more than 100 CEOs in a letter urging Congress to protect DACA. The cause has been renewed this week as the United States government heads into another potential shutdown this Friday.

Apple has spent increasing amounts of money lobbying the Trump Administration, in 2018 alone spending $6.6 million and in 2017 spending $7.1 million. Apple's lobbying increased significantly after Trump took office, with the company spending more than ever before to influence the current government on issues such as privacy, education, climate change, trade, immigration, tax reform, and patent reform.

Tim needs to focus on his products than dealing with politics and worrying about what Trump is doing!
Reactions: Cameroncafe10a, Kris28, saytheenay and 57 others
Comment

Tim Cook stories are boring. All politics and little else.
Reactions: Kris28, saytheenay, behdadOS and 32 others
Comment

“Americans are dreamers too” -DJT

CEOs and Hollywood need to let get off their hypocritical virtue signaling horse and either run for Congress to actually make chances or shut the funk up and let congress do its thing.
Reactions: Cameroncafe10a, Kris28, behdadOS and 37 others
Comment
T

I would prefer if corporations stayed out of politics. Behind this veil of empathy, it's in their interest that they support policy that keeps wages low. The actual politics of the dreamers themselves is awkward to say the least. Their parents skated the law, but being a minor they would have had no idea whats going on.
Break up families, or let them stay and set a precedent, that if you break the law long enough, you will win. Thats a great message to send across the world if you want to control your immigration levels. But sending "back" people who may have only been month old babies when they came to the USA, seems pretty heartless. Good luck resolving that one America.
Reactions: Kris28, behdadOS, machaven and 35 others
Comment
J

Great! To enroll in the DACA system at all, these folks have to PROVE they've never been convicted of a crime, be gainfully employed and contributing to our system, and pay a periodic fee for processing (among other requirements).

There is no logical reason to deport them to a foreign country.
Reactions: TComm, Stryder541, MyMacintosh and 6 others
Comment
W

Throw in the wall and I'm on board with this.
Reactions: behdadOS, Aftermath747, TComm and 20 others
Comment

And McDonald’s isn’t considered a viable job to support yourself
Reactions: Cameroncafe10a, machaven, Aston441 and 13 others
Comment

Bingo. But the odds of that happening seem to be dropping by the minute. In short: control the borders to stop this from happening again, and be compassionate to people already here since they were young.
Reactions: TComm, gr8hii, KazKam and 11 others
Comment
L

The motive of this coalition is simple. Rather than expend time, effort, and money on improving the education of citizens to fill the high tech jobs they have they’d rather import non citizens who they can pay less and get more work out of instead. It’s capitalism at its best. No altruism here, no social justice, just shear greed for profit.
Reactions: Aston441, ibivibiv, Objectivist and 15 others
Comment

But most are not.

NYT
The wall has consistently been unpopular, with voters opposed by around a 20-point margin over months of national surveys. That makes it even less popular than the president himself.
Click to expand...

He campaigned on Mexico paying for the wall, not American tax payers. It's a losing proposition for him no matter how you look at it.
Reactions: PrincePoppycock, n0-0ne, rafark and 6 others
Comment
W

Superhappytree said:
Tim Cook stories are boring. All politics and little else.
Click to expand...

The more clicks and comments, the more of these stories we will see, thanks in part to complainers just like you.
Reactions: MyMacintosh
Comment

Who do I have to lobby to get Apple reform?
Reactions: behdadOS, machaven, KingBowser64 and 11 others
Comment

If only Cook signed a letter addressed to his VPs in support of fewer cost-cutting compromises in his company's products he'd get a far better reaction to his non-Apple initiatives here.
Reactions: Hank Carter
Comment

I was just getting ready to say the same thing. Leave politics alone and focus on your computers, bean counter.
Reactions: Kris28, KingBowser64, snek and 8 others
Comment

Tim Cook is an open borders globalist. How long will people be in denial of this for?
Reactions: Cameroncafe10a, behdadOS, Aston441 and 23 others
Comment
W

CEOs and Hollywood need to let get off their hypocritical virtue signaling horse and either run for Congress to actually make chances or shut the funk up and let congress do its thing.
Click to expand...

There is no virtue signaling going on. This is an exchange of money for votes in Congress. Everyone is playing their roles in a system that needs reform.
[doublepost=1549900320][/doublepost]

thadoggfather said:
Tim Cook is an open borders globalist. How long will people be in denial of this for?
Click to expand...

So it Trump when it benefits his own business too.
Reactions: Kengineer, Hank Carter and imageWIS
Comment

centauratlas said:
Bingo. But the odds of that happening seem to be dropping by the minute. In short: control the borders to stop this from happening again, and be compassionate to people already here since they were young.
Click to expand...

Serious question. Could you please help me understand why you believe a physical wall would actually stop much illegal immigration? (ps. this is meant to be a civil, calm, discussion, and not poking at one side or another being bad).

All studies report that a) vast number of illegals are not from sneaking across the Mexico border but rather overstaying their visitor visa b) Physical wall can be bypassed by digging tunnels, a large ladder, etc. c) The cost and resources to build one along the entire wall are massive. This clip from John Oliver summarizes a lot of this discussion (albeit a bit too comical but I didnt have time to start pulling up the assessments from the more serious news sites)

Tim cook … the politician, champion of human rights, advocate of gay/transgender rights, environmental activist … is he still the CEO of Apple?
Reactions: Aston441, Naraxus, GuruZac and 5 others
Comment

Time for him to retire as CEO of Apple and become a politician. Apple needs a tech visionary not a politician to be CEO.
Reactions: Cameroncafe10a, Kris28, behdadOS and 23 others
Comment

CEOs and Hollywood need to let get off their hypocritical virtue signaling horse and either run for Congress to actually make chances or shut the funk up and let congress do its thing.
Click to expand...

Congress hasn't done it's thing. That's the point. A bunch of racists have held up immigration reform for years.
Reactions: Stryder541, Kengineer, MyMacintosh and 2 others
Comment
F

Tim is a supply chain guy and labor is just another expense in that chain. Tim and Apple have a long history of driving down input costs to increase their bottom line, this is no different. Note, all companies do this in order to survive.
Reactions: pratikindia, Agit21, Hank Carter and 1 other person
Comment
You must log in or register to reply here.
Share:
Facebook Twitter Reddit Email Share Link
Register on MacRumors! This sidebar will go away, and you'll see fewer ads.
Sign Up
Top Bottom