Apple CEO Tim Cook plans to host a fundraiser that will benefit Democratic presidential nominee Hillary Clinton, reports BuzzFeed. Cook, along with Lisa Jackson, Apple's vice president of environment, policy, and social initiatives, will host the event as private citizens, not as representatives of Apple.

Cook and Jackson plan to raise money for the Hillary Victory Fund, a committee that contributes to the Clinton campaign, the Democratic National Committee, and 38 state parties. Invites for the event, which will take place on August 24, went out this morning. 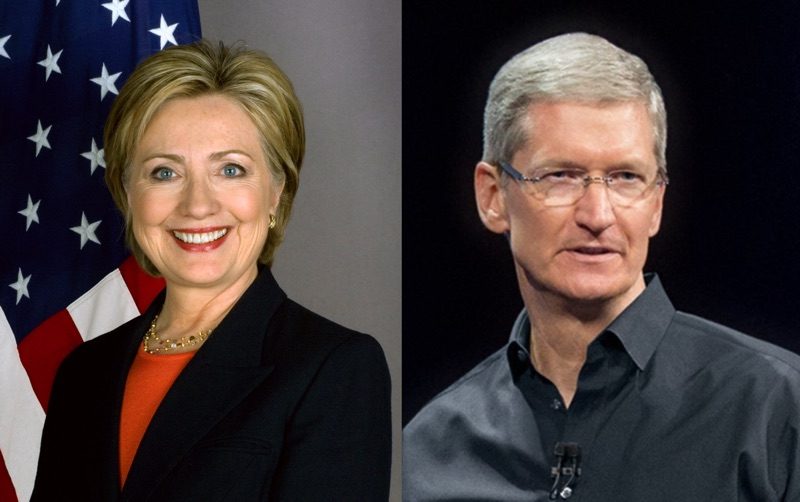 Apple CEO Tim Cook is eager to demonstrate support for Democrats and Republicans to strengthen Apple's relationship with both parties.

The Hillary fundraiser will follow a fundraiser Cook co-hosted for Republican House Speaker Paul Ryan in June. Cook and Ryan teamed up to host a private breakfast in Menlo Park on June 28. Money raised benefited Ryan and a fundraising committee that helps elect other House Republicans.

While Cook hosted a fundraiser for Ryan, Apple elected not to support the 2016 Republican Convention in Cleveland due to some of presidential nominee Donald Trump's controversial statements on the subjects of minorities, women, and immigrants.

Good for Tim. Can we at least get a special edition Hilary watch band? I would be fine as long as it is not exclusive for an Apple store in Brazil.
Reactions: dan110, Glideslope, imageWIS and 12 others

I've got a friend that will never buy an iPhone again if he reads this news.

He quit eating Heinz ketchup because of who John Kerry was married to.
Reactions: DenonHD8, jjhny, Banyan Bruce and 40 others
S

Why can't he just concentrate on business?
Reactions: DefenseEngineer, jjhny, Banyan Bruce and 142 others

Not much of a fan of Hillary but she's at least better than Trump.
Reactions: DenonHD8, iChrist, mcorleone and 43 others
W

Tim, can you take time out from your busy culture warrior schedule to help squeeze out an up to date Mac Pro?
Reactions: DefenseEngineer, jjhny, AlexJaye and 134 others

I agree but this personal thing that he is doing...not as a company. So he could do whatever he wants.
Reactions: Col4bin, iChrist, The Barron and 29 others

Wish the nominee were Bernie
Reactions: DenonHD8, Banyan Bruce, mzubb and 50 others
X

Well, I guess playing both sides of the field at least shows that Apple as a company wants to be neutral.
Reactions: Riversen and appledefenceforce

But why would she need more money?

Sorry, I am not from the USA so I might be missing something.
Reactions: richhh, Jason83, randy98mtu and 7 others

seatton said:
Good for Tim. Can we at least get a special edition Hilary watch band? I would be fine as long as it is not exclusive for an Apple store in Brazil.
Click to expand...

The Hillary version can only be purchased from prison.
Reactions: DefenseEngineer, jjhny, Banyan Bruce and 75 others

Interesting. I guess Tim doesn't have a problem with Hillary taking BIG $ from countries that are super anti-LGBT and anti women.
Reactions: DefenseEngineer, jjhny, Banyan Bruce and 79 others

filmantopia said:
Wish the nominee were Bernie
Click to expand...

Maybe Bernie got paid to fail.
Reactions: midwestfisherma, Romy90210, Tesseract and 3 others

How dare he spends his free time with taking part in politics?!

Why doesn't he just silently vote and forget about it for 3.5 years like the rest of the general public?
The nerve he has to take this "democracy" thing seriously...

Glassed Silver:mac
Reactions: Keane16, Jax44, The Barron and 32 others
J

I'm so happy that Tim Cook has extra time. Both the US government and Apple have something in common today... both bloated and seemingly without direction.

However, this is definitely a way to lobby a president to appeal to issues on encryption and prevent future monopoly government intervention.
Reactions: ToroidalZeus, sbailey4, LastName and 18 others
W

CarlosQG said:
But why would she need more money?

Hillary has "raised" almost 400 million to date. She is going to use it to help needy kids because she is a democrat and that is what she cares about.

Oh, wait.. You mean she is not donating it to the poor, the hungry? You mean she is spending it on herself to gain power? That can't be!
Reactions: jjhny, ksnell, sittnick and 57 others

MacLawyer said:
Tim, can you take time out from your busy culture warrior schedule to help squeeze out an up to date Mac Pro?
Click to expand...

Stick to business Apple. Pisses me off that they even are going anywhere near politics. I think America needs to take a year off and try again for new nominees. Man this really is not what I wanted to read today.
Reactions: jjhny, Banyan Bruce, mzubb and 30 others

centauratlas said:
Interesting. I guess Tim doesn't have a problem with Hillary taking BIG $ from countries that are super anti-LGBT and anti women.
Click to expand...

Whether he does or doesn't I don't know, but he most likely got this down:

again with more social items instead of what APPLE IS! Tim Cook needs to be sacked!
Reactions: jjhny, bobbytomorow, velocityg4 and 42 others

This is awesome. Bottom line is, conservative Republicans love Citizens United unless it benefits the Democrats! Hilarious hypocrisy, but what else is new?! Corporations are people, too, remember? We still need to get rid of Citizens United ASAP, but until then, the law is the law! Go Timmy!
Reactions: Aussieiphone, nutjob, philosoraptor1 and 7 others
You must log in or register to reply here.
Share:
Facebook Twitter Reddit Email Share Link
Register on MacRumors! This sidebar will go away, and you'll see fewer ads.
Sign Up
Top Bottom