Apple has nixed all of the Intel MacBook Pro models from its MacBook Pro lineup, with the prior-generation Intel i7 and i9 machines now discontinued. 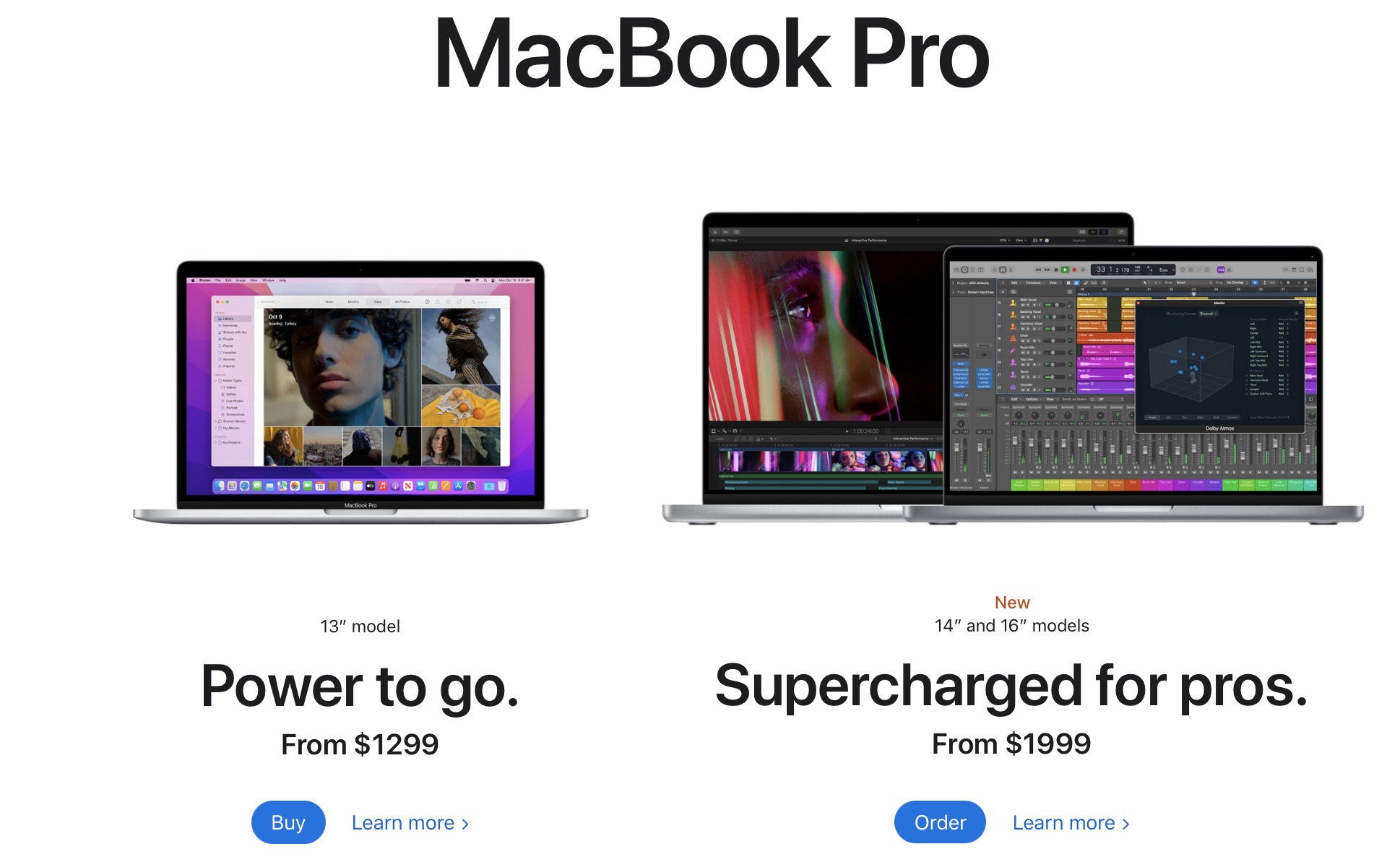 Apple's MacBook Pro lineup is as follows:
Intel chips continue to be available in desktop machines that include the Mac mini, iMac, and Mac Pro, but upgrades for all of those devices are in the works and expected next year.

On stage today, Apple CEO Tim Cook said that we're one year into the two-year transition from Intel chips to Apple silicon, so we can expect most of the rest of the Mac lineup to get updated in 2022.

The new M1 Pro and M1 Max MacBook Pro models can be pre-ordered from the Apple Store starting today and are set to ship out next week.

In another news, Intel is working on the next commercial
Reactions: goobot, SurferPup, Rashy and 53 others

These are nice with an old school design.

Should've done this a year ago as those Intel CPUs were obsolete even then. Better late than never though.
Reactions: Babygotfont, GSWForever8, gene731 and 2 others

An Intel-igent move, no?
Reactions: DeepIn2U, zapmymac, brand and 14 others

I can't wait for Intel's next anti-Apple commercial once they see this. Anyone remember Monty Python's "She's A Witch" skit? More power to you Apple!
Reactions: DeepIn2U, Babygotfont, GSWForever8 and 5 others
S

They look fantastic, almost like a greatest hits of the last couple of years of Apple tech flung into a shiny box. Slightly disappointed they didn’t change the design a bit more (especially after the into made it look like they had…), but I think they’ve knocked it out if the park with these machines.
Reactions: DeepIn2U and AxiomaticRubric
K

I remember the day when the thought of “Core i9” made me tingle. Now it’s like eating dog kibble
Reactions: wedgeman, bigandtasty, ZZ9pluralZalpha and 16 others

kalafalas said:
not just dual, quintuple ? 3 6Ks via DP, 1 4K via HDMI, and the built in, all driven at once
Click to expand...

Only the M1 Max though, the M1 Pro can support two monitors up to 6K resolution each
Reactions: Babygotfont, ClevelandGuy and kalafalas

How long before reviewers have their hands on one? I want to see what this notch looks like up close, and if there are OS options to lower the Menubar below it so I won't "virtually" see it - similar to how it looks when apps are in full screen..
Reactions: Babygotfont, macpot and Mr Todhunter

It was a good move in 2005. We've had incredible machines throughout the years, and it sure helped the Mac platform to mature. Just a pity they couldn't keep up with the expectations and their promises. It's incredible how far Apple has come with chip development. These new chips are not a little bit better than their predecessors. They're miles ahead. In fact, they are so far ahead you might wonder what both AMD, Intel, and Nvidia have been doing for the last years.
Reactions: JosephAW, DeepIn2U, bigandtasty and 8 others

These machines are beasts!
Reactions: Rashy, bigandtasty, Babygotfont and 4 others

So I was the only one who liked the magic toolbar, eh?
Reactions: Amazing Iceman, DeepIn2U, slimtim49036 and 8 others
T

Yep, finally you can plug in more than 1 monitor to your MacBook, only costs you $2000 to do so. Even a $400 windows laptop will let you plug in two monitors.

As impressive as they are, this just really bothers me.
Reactions: Stridr69, Rashy, slimtim49036 and 7 others

rainbowdementia said:
So I was the only one who liked the magic toolbar, eh?
Click to expand...

Yea, what was so "magic" about it? Photoshop already includes a wand.
Reactions: bigandtasty and Babygotfont
L

nvmls said:
Yea, what was so "magic" about it? Photoshop already includes a wand.
Click to expand...

I just liked the emoji toolbar. That's about it really.
Reactions: Babygotfont and Dionte

Just wondering if I should upgrade from my 2020 MBA M1 (base model)...
Reactions: bigandtasty and Babygotfont

I was driving, I couldn’t catch it at the time. Joined in at the very end unfortunately.
Reactions: Babygotfont

If the real world results come close to what Apple has promised - they have truly made a technical leap.

Intel/AMD are in a bit of trouble.
Reactions: Babygotfont and AxiomaticRubric

It’s pretty incredible that Apple was able to complete this transition so fast. I can’t wait to get my hands on it next week.
Reactions: Babygotfont and ellsworth
You must log in or register to reply here.
Share:
Facebook Twitter Reddit Email Share Link
Register on MacRumors! This sidebar will go away, and you'll see fewer ads.
Sign Up
Top Bottom