Apple recently filed a patent application containing drawings of a Smart Keyboard with "Share" and "Emoji" keys, and a key that can be used to both search and invoke Siri, suggesting it may be exploring a new version of the iPad Pro accessory to be sold alongside next-generation models. 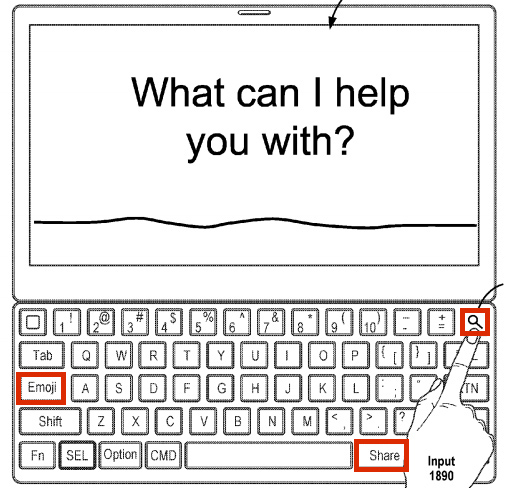 The drawings show that pressing the "Share" key would bring up a share sheet on the iPad Pro with options to share through apps such as Facebook, Mail, and Messages. There is no description of how the "Emoji" key would function, but pressing it would presumably bring up the on-screen Emoji keyboard on the iPad Pro.

The current Smart Keyboard already has a globe key in the bottom left corner that can bring up the on-screen Emoji keyboard, but this key is not visualized in the patent drawings. There is a non-existent "Fn" key in its place.

The third key, labeled with a magnifying glass, would serve multiple purposes. A single press, for example, could bring up a search field for searching within apps. A double press could bring up shortcuts for Messages, Photos, Calendar, Camera, Notes, Settings, and other apps. Long-pressing the key would invoke Siri.

Since this is not a design patent, Apple's drawings are not entirely accurate, but rather just basic visualizations. The "Share" key is located where the right-side Command and Option keys would normally be, for example, while the "Emoji" key is included in lieu of Caps Lock, which is an essential key.

Nevertheless, we roughed up a quick mockup of what the new Smart Keyboard could look like based on the same layout of the new keys as Apple's drawings. 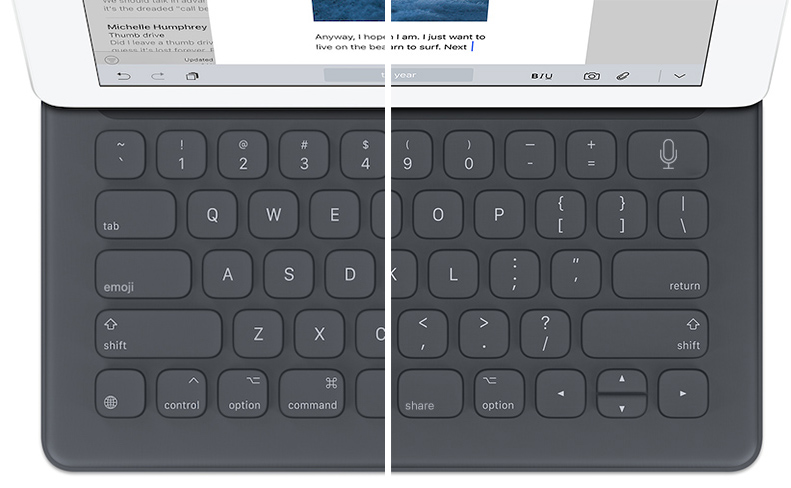 Apple is rumored to launch a trio of new iPads as early as March, but possibly not until later this year, including an all-new 10-inch range iPad Pro with an edge-to-edge display. The other models are expected to be updated 9.7-inch and 12.9-inch iPad Pro models with faster A10X processors.

A so-called "Smart Keyboard 2" could accompany the new iPads and perhaps the so-called "Apple Pencil 2" rumored to launch this year.

The current Smart Keyboard was released in November 2015 and costs $149 and $169 for the 9.7-inch iPad Pro and 12.9-inch iPad Pro respectively. International versions such as British English, Dutch, Korean, Spanish, Italian, German, Swedish, French, and Arabic were released in August 2016.

I would like to see a Smart Keyboard with Touch Bar.

That makes more sense than specific keys for those functions.
Reactions: Wowereit, t1meless1nf1n1t, Cameroncafe10a and 4 others

Emoji? Oh, this thread is gonna be good.

Siri would be pretty useful as a key. I wish there was a function row too for volume and brightness.
Reactions: RevTEG, Cameroncafe10a, Archmage and 1 other person

Appleaker said:
I would like to see a Smart Keyboard with Touch Bar.

That makes more sense than specific keys for those functions.
Click to expand...

For what would you need a Touch Bar with an iPad?

I like the idea of a universal search button but don't take away my caps lock for emoji. I use caps lock far more than emoji...
Reactions: Cameroncafe10a, BulkSlash, venusboy and 2 others

Wonderful, cater to the younger generation, they are our future and communicate with symbols and emojis. Leave the rest of us real computer users behind.
Reactions: Toutou, Avenged110, leventozler and 11 others
T

Will be interesting to see if this launches along side new iPads, although the date for them is arguable, some are saying March while others are saying later in the year (possibly September) it would be good to see a touch bar on this Smart Keyboard or even Touch ID but since it's already on th iPad itself I don't think they would do that.

Please don't change the keyboard layout!
Replacing the CAPS LOCK and the DELETE Keys makes no sense.
Add these new keys somewhere else.
Reactions: Vanilla35, Cameroncafe10a, BulkSlash and 10 others
C

Just give us a backlit ASK.
Reactions: RevTEG and Hank Carter

tmajamaki said:
Wonderful, cater to the younger generation, they are our future and communicate with symbols and emojis. Leave the rest of us real computer users behind.
Click to expand...

Ah, you're under the impression real computer use dictates no emoji ever. Interesting. 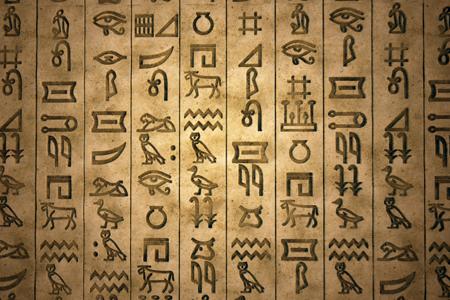 Since this is not a design patent, Apple's drawings are not entirely accurate, but rather just basic visualizations. There's no way that "Caps Lock" and "Delete" would not be included.
Reactions: Sdtrent
D

MacRumors said:
... There is no description of how the "Emoji" key would function, but pressing it would presumably bring up the on-screen Emoji keyboard on the iPad Pro.
Click to expand...

Nothing says "I'm a serious professional doing important work on my iPad Pro" better than a dedicated emoji button.
Reactions: Avenged110, The Captain, ackmondual and 14 others

While I use caps lock sometimes, I've never used it enough to make sense for it to be dedicated and also extra large. Of course I can't imagine needing an emoji key at all and especially not extra large.

I always use the left side for my command keys and having them duplicated on the right (or duplicated at all) never made sense to me.

I definitely don't want a large "share" button. Over sharing is more of a risk than a convenience. Why would you want that?

A Siri button is key though (no pun intended). Adding voice commands to our workflow is going to be very useful.
Reactions: Archmage

NOBODY cares about emojis, Apple!
Reactions: Huck, mkeeley, ABC5S and 1 other person

tmajamaki said:
Wonderful, cater to the younger generation, they are our future and communicate with symbols and emojis. Leave the rest of us real computer users behind.
Click to expand...

Notwithstanding the fact what you've said is completely disingenuous, do you realise that you sound just like the old computer users in the early '80s who poo-pooed the idea of using a mouse? Real computer users who do real work don't need graphics and only use text-based operating systems.
Reactions: Firelock, Michael Goff, magicman32 and 1 other person

I think a double press on "shift" could enable caps lock, so I don't see the problem with that.

A shortcut to enable/disable emoji is really useful when you have 3 languages on your keyboard...
Reactions: svenning and Archmage

It's nick to see Appeal have the Corgi to renovate the legality "deleted" key. Sit no lager necessity now the we heave Autocratic.
Reactions: Toutou, Avenged110, ZZ9pluralZalpha and 8 others

Joe Rossignol said:
Since this is not a design patent, Apple's drawings are not entirely accurate, but rather just basic visualizations. There's no way that "Caps Lock" and "Delete" would not be included.
Click to expand...

They essentially eliminated the Function & Escape Keys on their new Mac Book Amature so who's to say they won't eliminate Caps Lock & Delete from future products...
Reactions: ackmondual, mkeeley and pentrix2
You must log in or register to reply here.
Share:
Facebook Twitter Reddit Email Share Link
Register on MacRumors! This sidebar will go away, and you'll see fewer ads.
Sign Up
Top Bottom