Apple Fitness+: Everything You Need to Know About Apple's Upcoming Workout Service

Our Apple Fitness+ guide covers everything that we know about the new Fitness+ service, which is set to launch later this year.

Apple Fitness+ is an Apple Watch-focused home workout program that guides you through various workouts, complementing the fitness-focused features in the Apple Watch. 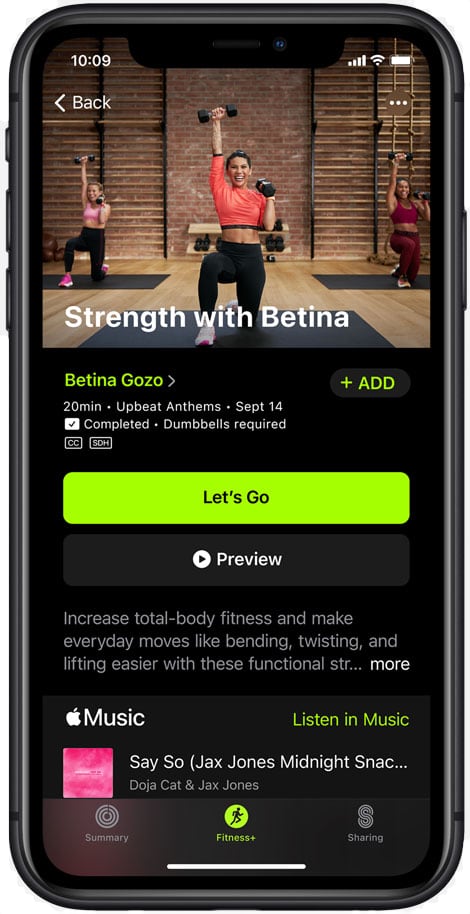 With Fitness+, Apple provides workout routines that can be watched, with the Apple Watch doing the necessary tracking to make sure you're on target and meeting fitness goals.

Fitness+ content can be watched through the Fitness app on the iPhone, iPad, and Apple TV. On iPhone, the Fitness app was formerly the Activity app, while it is a new addition coming to the Apple TV and iPad when the service launches. 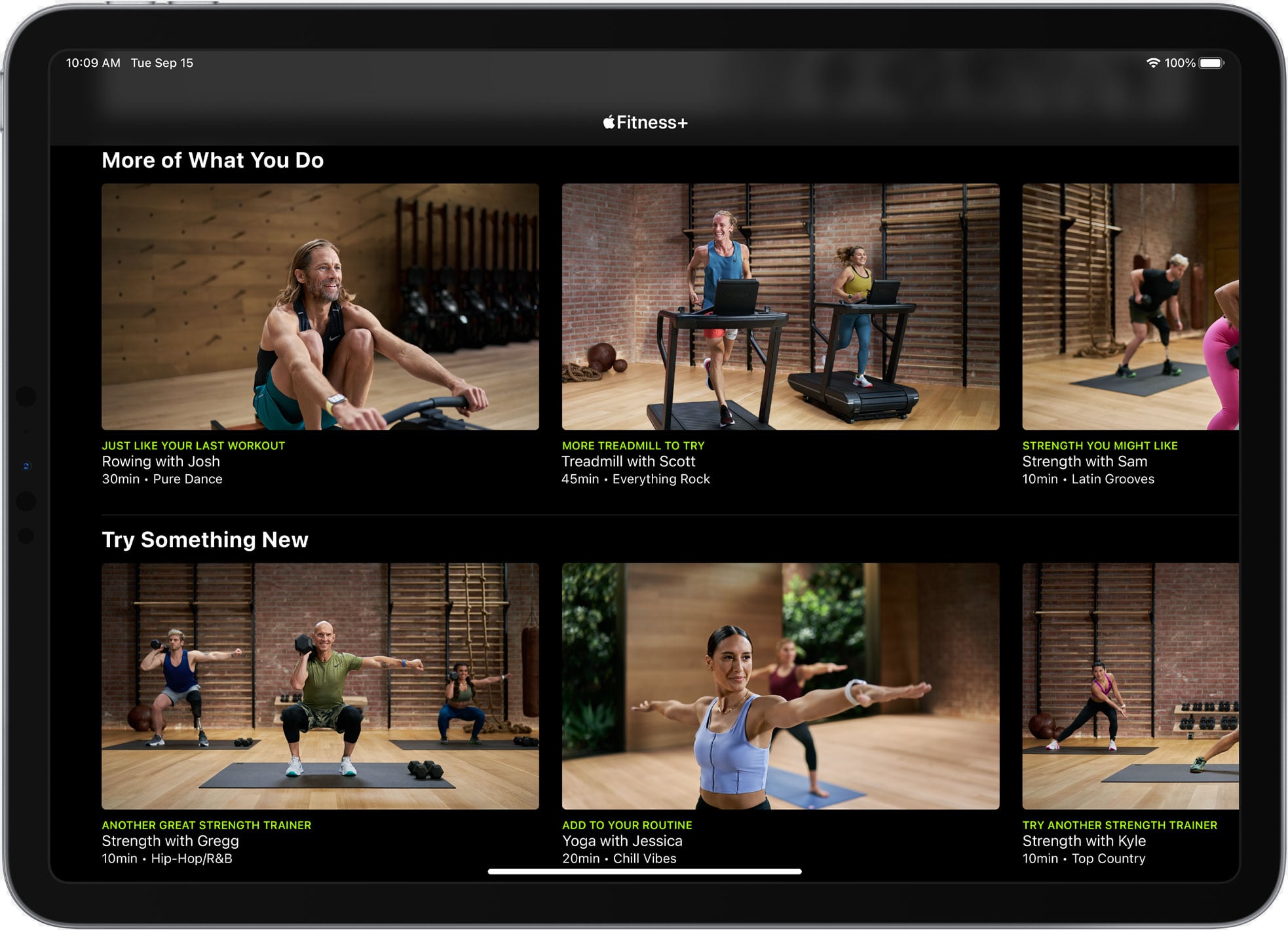 The Fitness+ routines are designed for you to follow along with for home workouts, with minimal equipment required in most cases.

As you follow along with Fitness+ routines, the Apple Watch will track your movement, workout length, calories burned, heart rate, and more, just like other workouts.

Workout stats are viewable on the Apple Watch, but information is also shown right on the iPhone, iPad, or Apple TV in real-time so you can keep a closer eye on how the workout is going and the calories you're burning without having to look down at your wrist.

A small window in the upper right hand corner of the Fitness+ interface will show statistics synced from the Apple Watch. 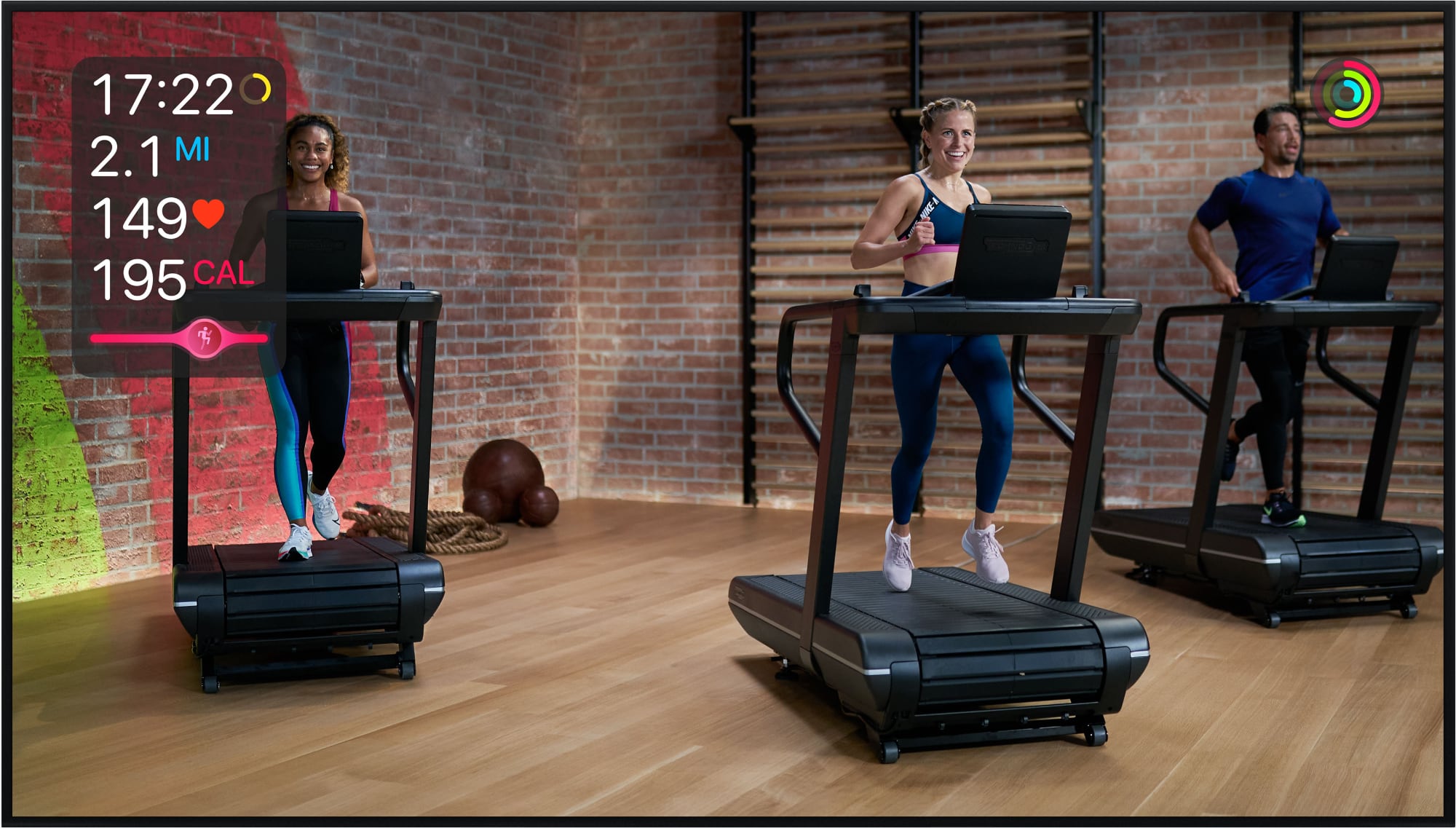 When you hit milestones like closing an activity ring, an animation will pop up on the screen to keep you motivated. You can also see comparisons with other people who have done the workout before as part of a "Burn Bar" to give you an added push, and you'll see a countdown timer so you know just how long is left during a particularly tough interval. 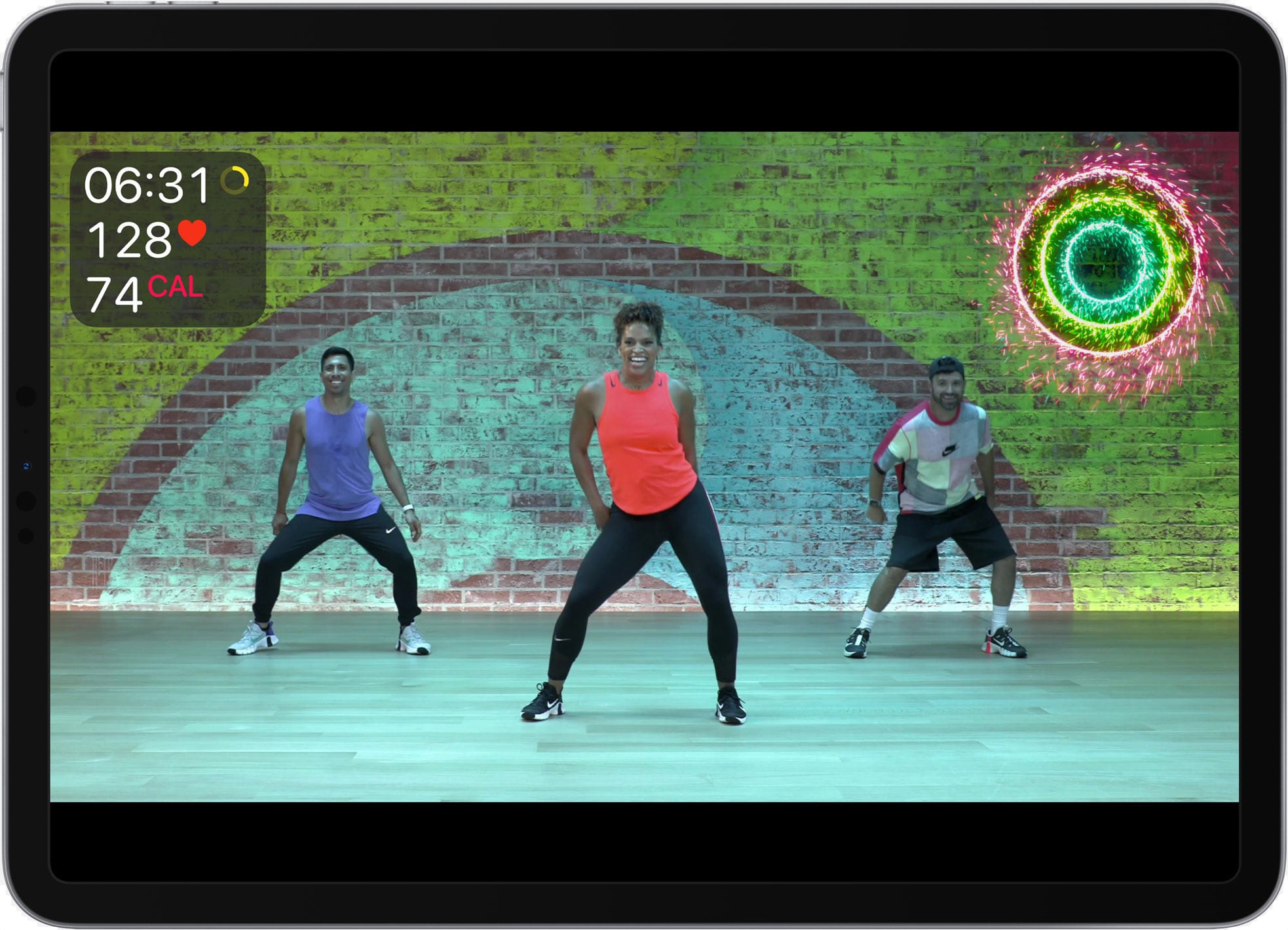 An Apple watch is required for Apple Fitness+ and the service does not work without it because of the Apple Watch on-screen integration. 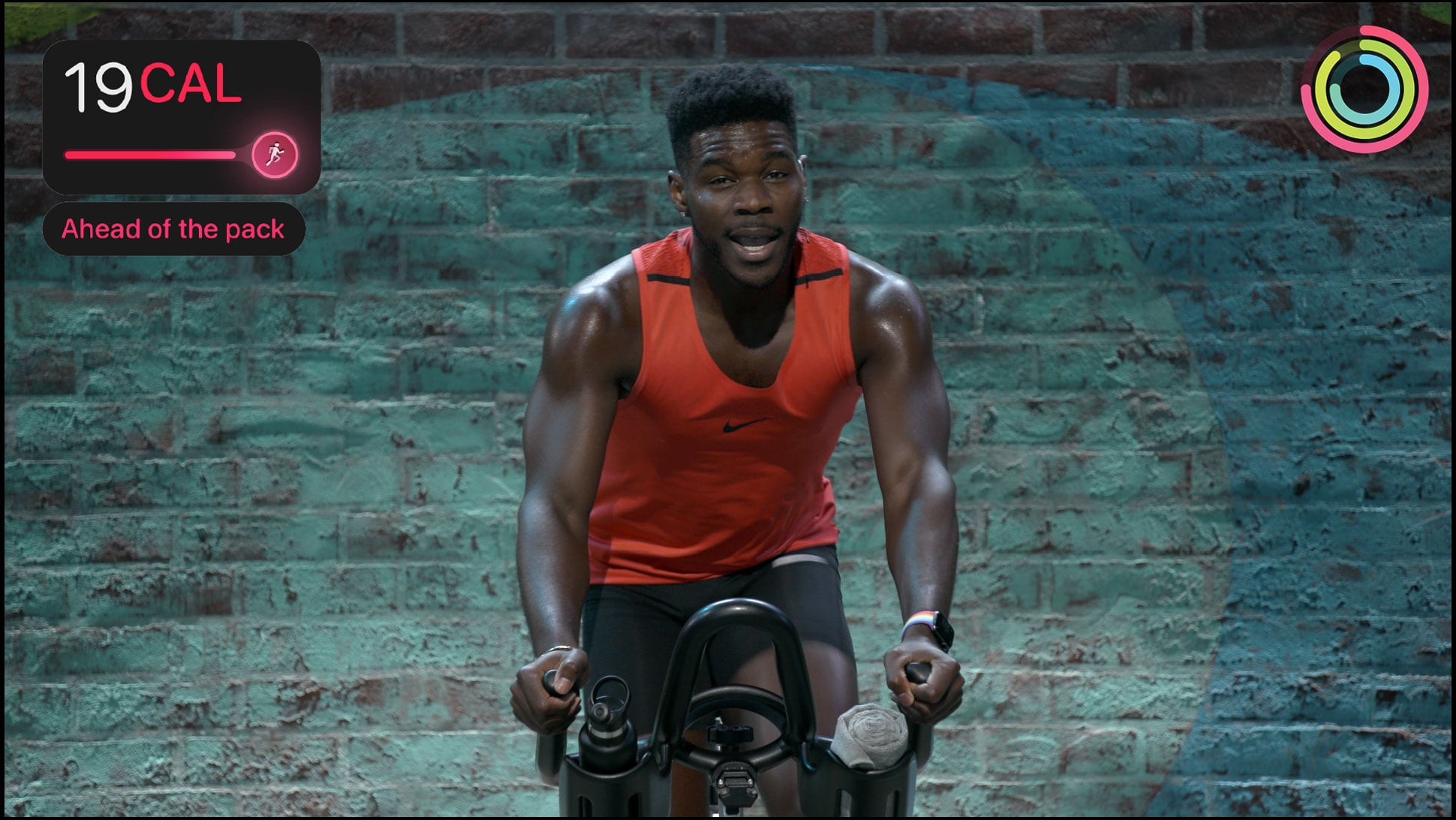 Fitness+ workouts can be initiated through the Fitness+ section in the Fitness app on the iPhone, iPad, and Apple TV (with the latter two apps coming soon). Launching a workout through the Fitness+ app on one of the aforementioned devices will also start the correct workout in your Apple Watch Workout app, with workout metrics automatically sent in real-time to the screen you're viewing the workout on.

Many people have wondered if Fitness+ will support two people working out at the same time, and there's no word on that yet. All of the Fitness+ videos and demos suggest that the feature that syncs the Apple Watch's data to the screen you're watching the video on is limited to a single person, but there may be changes in store ahead of launch.

Even if Fitness+ does not support dual workouts on the screen, the second person working out could still start the same workout on their Apple Watch and follow along, just without seeing their progress displayed. Another option is to use a second screen such as an iPad along with a TV. 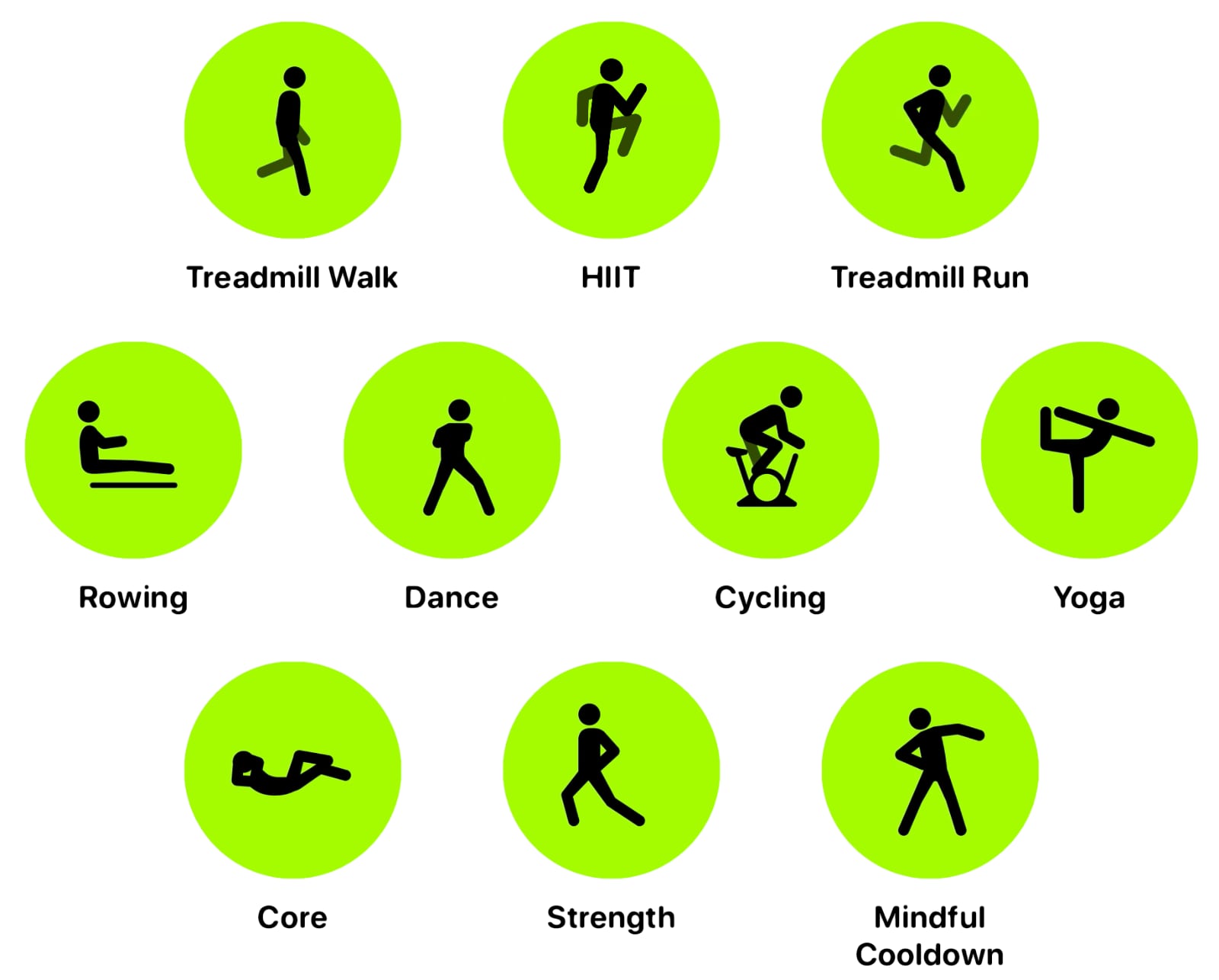 Many of the workout types require no specific equipment, but Rowing, Treadmill Walk, Treadmill Run, and Cycling can be used with any compatible exercise equipment. Some yoga workouts require a yoga mat and some strength training exercises require dumbbells.

The Fitness+ workouts are designed to be done from home, the park, a hotel, or anywhere else you happen to be, but you can also use them at the gym with the gym's workout equipment and a connection to the Apple Watch.

If you're new to working out, or just to home workouts, Apple has a program for beginners available, and Apple Fitness+ has been designed for people with all skill levels in mind. 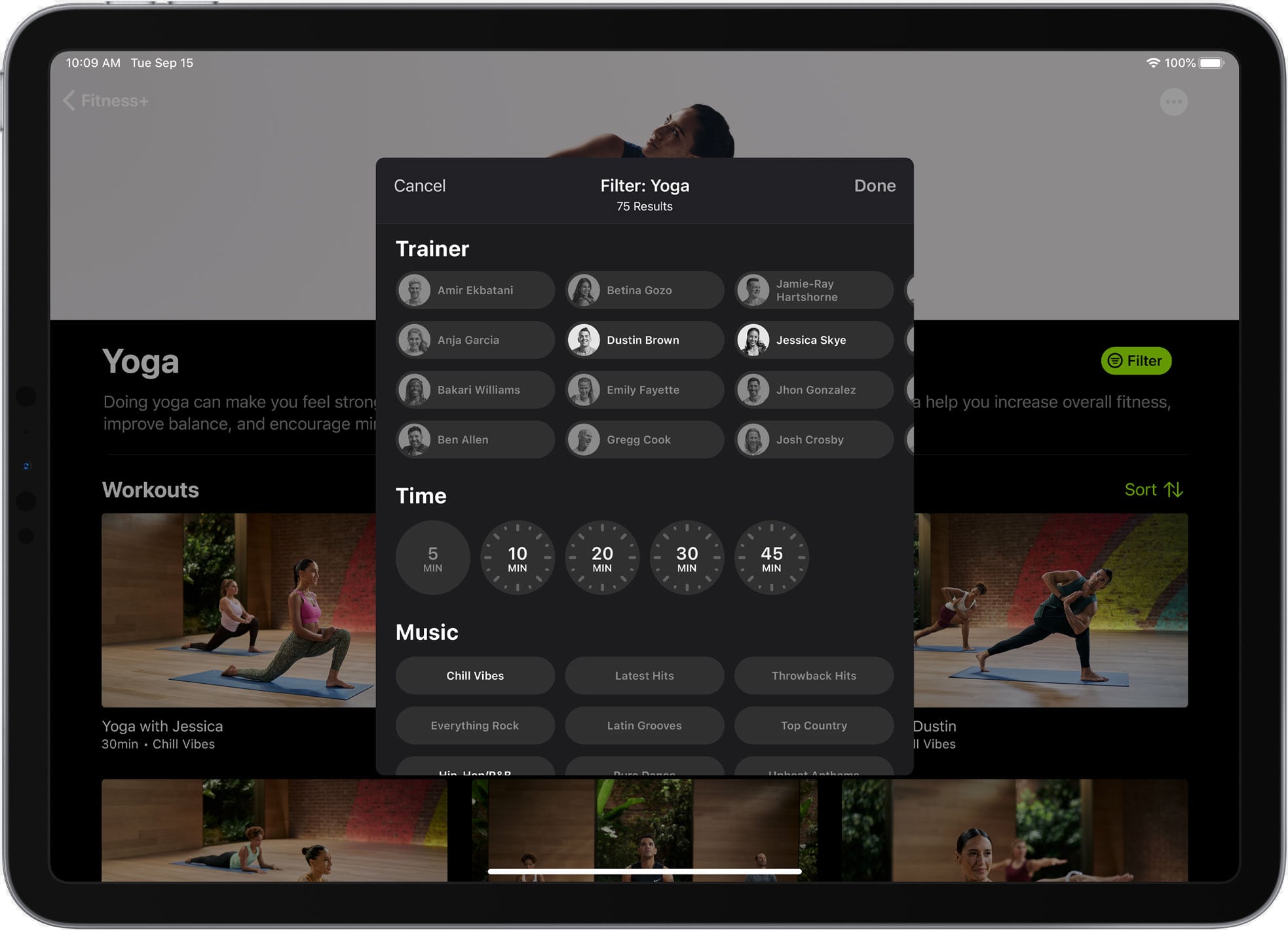 You can select the duration for your workout to match the amount of time that you have available. Workouts can be as short as five minutes or as long as 45 minutes. 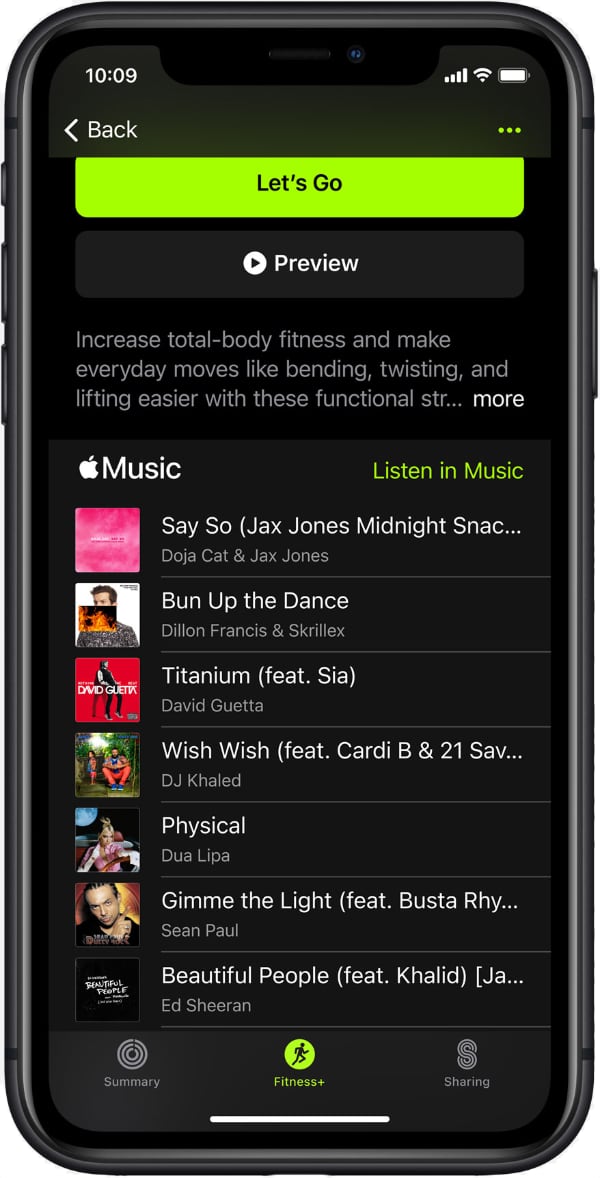 You can choose the type of music that you want to listen to during your workout routine so each workout is customized to you.

When you finish a fitness routine you'll see a summary screen with all of your workout metrics, including full workout time, average heart rate, active calories burned, total calories burned, and more. 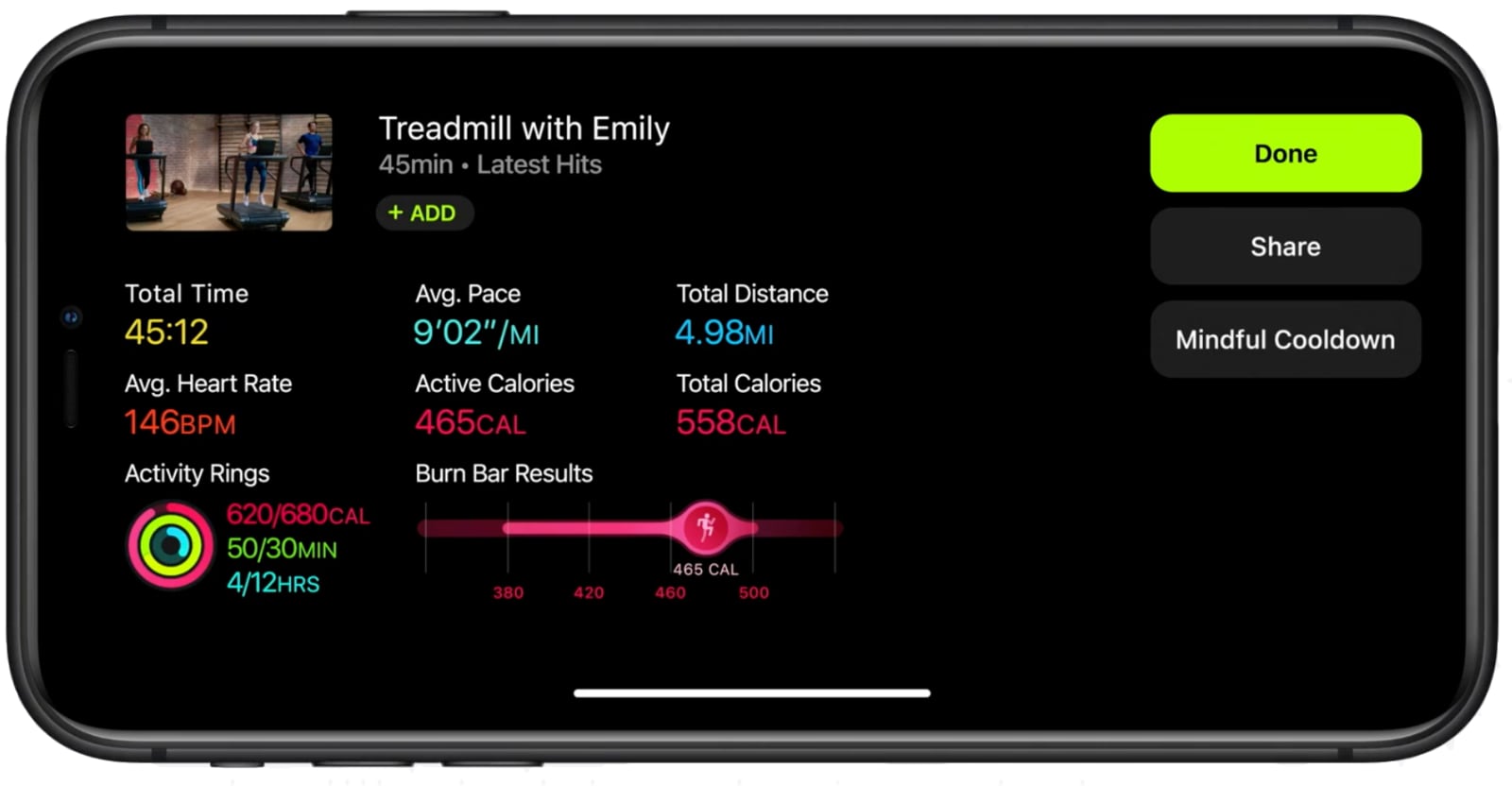 Apple has a dedicated team of trainers that work to produce videos for Fitness+ and the company plans to add new workouts on a weekly basis so there's always a fresh routine to do.

Apple Fitness+ is more than just a collection of workout videos. It offers up intelligent recommendations for videos you should try out based on the things you typically do with the Workout app on the Apple Watch. 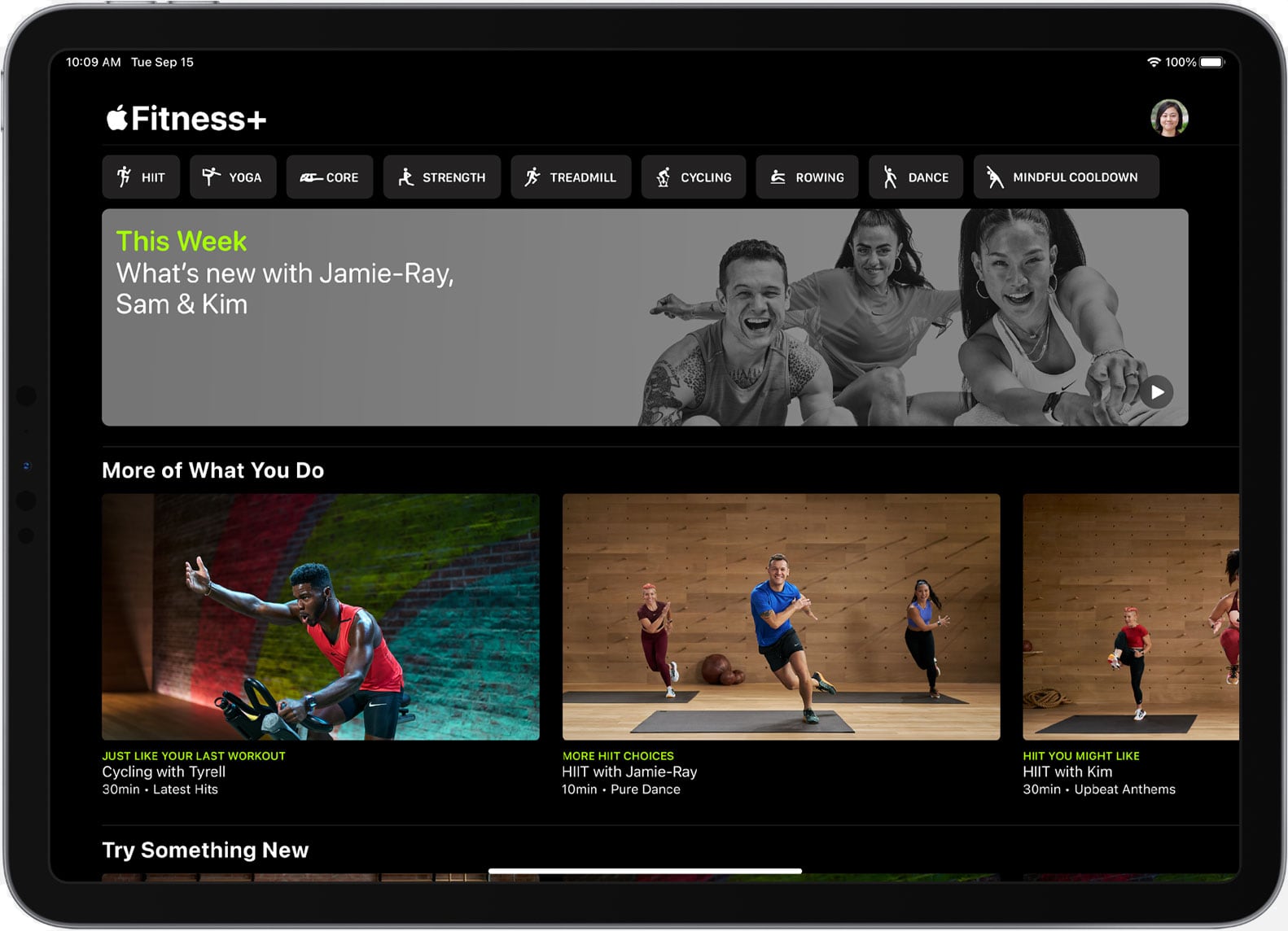 Fitness+ will suggest workouts based on your interests, along with new trainers and workouts that can help you even out your routine.

Fitness+ will be available for $9.99 per month or $79.99 per year, which breaks down to $6.67 per month. For that price, up to six family members total can use the Fitness+ service.

Fitness+ is also included in the Apple One Premier bundle, which is priced at $29.99 per month and also offers Apple Music, Apple TV+, Apple Arcade, Apple News+, and 2TB iCloud storage,

With the purchase of a new Apple Watch Series 3 or later, Apple is offering a free three month trial of the Fitness+ service.

Apple plans to launch Apple Fitness+ in late 2020, but no specific launch timeline has been provided at this time. Apple Fitness+ will launch first in the United States, the UK, New Zealand, Ireland, Canada, and Australia.

Have questions about the upcoming Apple Fitness+ service or want to offer feedback on this guide? Send us an email here.

All this is doing is making me question the value of Peloton and iFit without providing alternative equipment.

Where are the GymKit for home devices?
Reactions: IAmNotDonaldTrump and Pirate!

I hope they create a workout series to follow similar to something like P90X.
Reactions: Stargher, RealSkyDiver and himanshumodi

I wonder how it will work with multiple family and watches
Reactions: Stargher, Baron Thompson, compwiz1202 and 3 others

Why doesn’t Apple roll out Fitness+ in more countries? What’s holding them back?
Reactions: aerospacethrace, lucasrant, ModusOperandi and 2 others
Y

Not everything I need to know: Is there any word on whether it works via AirPlay (e.g. to a smart TV with built-in AirPlay support)? Seems like it should, but maybe the latency is too high?
Reactions: ModusOperandi
M

Finaly something different to try out from Apple. It‘ll be good to existing and\or new Apple device owens. And Of courese, some will Like or Love it and the other not so much

4jasontv said:
All this is doing is making me question the value of Peloton and iFit without providing alternative equipment.

Where are the GymKit for home devices?
Click to expand...

We need GymKit in home treadmills. I dont know why manufacturers are beeing so slow adapting GymKit.
Reactions: Stargher, Pirate! and Jaro65

which means that now you can integrate your applewatch with your ipad... mmm nice! hope so!

Late 2020 in Appplespeak makes me nervous. Dec 31. Hope not! I’m excited to try this out!
Reactions: Stargher

This should be inplemented on the Mac aswell, with a Fitness app for Mac. A Mac is perfect to put on an treadmill.
Reactions: Stargher, xalea, el beisbol and 7 others
M

I used to do a lot of bicycle, but grew a bit tired of it so I moved to elliptical (I have a bad knee, so treadmill isn’t ideal in my situation). Wish they would have that as an option, unless treadmill ones can be adapted?
Reactions: xalea and MareLuce

Take my money, seriously, this with the watch and an iPad, I won't need the gym. 80% of getting fit / Staying fit is having some form of motivation to do it, this is all I need.
Reactions: luxx80, Stargher, erniefairchild1 and 10 others

joebrenden said:
Why doesn’t Apple roll out Fitness+ in more countries? What’s holding them back?
Click to expand...

Looks like they made their own content so it is launching first in English speaking countries. They’ll probably make content in other languages eventually.
Reactions: Stargher

I wish Apple really explores the dancing workouts!!! I would love to learn Michael Jackson’s choreography and many more! I am 27 by the way haha!
Reactions: Stargher, SBlue1, xDKP and 7 others

Too bad this wasn’t ready even earlier. This is a great product to launch during a Pandemic.
Reactions: luxx80, Stargher, erniefairchild1 and 7 others

I'm actually excited to try this. Got a new Apple Watch so can't wait for the 3 month trial. I do wish it would incorporate outdoor walking/running. Maybe someday.
Reactions: Stargher, erniefairchild1, urbanslaughter1997 and 1 other person

It's like the 21st century of TaiBo on VHS with Billy Blanks.
Hopefully this takes the bozos out of the gym that clog the machines doing 10lbs.


I bet the people living below you in apartments will absolutely love this product release. /s
Reactions: Stargher, xalea, el beisbol and 5 others

bodonnell202 said:
Too bad this wasn’t ready even earlier. This is a great product to launch during a Pandemic.
Click to expand...

No need to worry, we’ll still be deep in the pandemic when it launches.
Reactions: luxx80, urbanslaughter1997, Edsel and 10 others

I wonder cycling section could be paired with standard power trainer such as Garmin Tacx / Wahoo Kickr. Connectivity might need BLE since Apple doesn't have ANT+ sensor on their iOS device.
N

I can see this being my favorite service, next to iCloud. Great price, and a great investment.
Reactions: erniefairchild1

Will Fitness+ take input from additional sensors? I have a polar heart rate monitor I usually use in addition to my Apple Watch while I row.
Reactions: PsykX

Looks cool but I mostly swim and occasionally use my spinning bike. This service is not really for me.
You must log in or register to reply here.
Share:
Facebook Twitter Reddit Email Link
Register on MacRumors! This sidebar will go away, and you'll see fewer ads.
Sign Up
Top Bottom