With Apple opening a pair of new Canadian retail stores this past weekend in Halifax, Nova Scotia and Coquitlam, British Columbia, The Loop shares some fresh data on the company's retail chain performance.

Following the two grand openings this weekend, Apple now has 375 stores worldwide, and Apple notes that those stores have seen nearly 300 million visitors so far this year, or roughly 3500 visitors per store per day. Those numbers obviously vary significantly from store-to-store and day-to-day, but the company clearly continues to attract both new and existing customers to test drive Apple's products, make purchases, and seek support.

While meeting with Apple, I was able to get a few details about how the retail operation is going overall.

According to Apple, the company has seen almost 300 million worldwide visitors so far in 2012. To give you some type of comparison, by July 2011, the population of the United States was estimated to be 311 million people.
Click to expand... 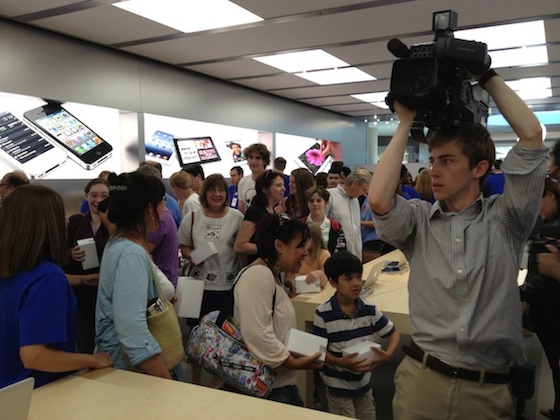 Opening day rush at Apple's new Halifax retail store (Source: The Loop)​
On the support side, Apple now reports that the company's retail store Genius Bars are now serving 50,000 users per day, or about 130 per store per day.

Apple has been working hard to meet surging demand for its retail stores, opening new stores on a regular basis and expanding or replacing some of its smaller outdated locations. The company has also been looking for ways to increase Genius Bar availability at its existing stores, increasing multitasking demands on its staff several years ago and even mocking up redesigned Genius Bars that could serve more customers at a time.

Update: The Loop has clarified that the store visitor numbers refer to fiscal 2012 rather than calendar 2012, meaning that the company is seeing closer to 2500 visitors per day at its stores on average.

Holy-- The alleged pay raise was well deserved then. That truly is a lot of people.
Comment

With the success of the Apple store, now Samsung, Google & Microsoft are all copying the look, feel and function of it. It feel good to be the original.
Comment
M

This reads like a fluff piece from the mouth of Apple's PR department itself. Especially ironic after last week's report of Broward's attempt to axe jobs and explicitly stated desire to cut back on customer service in Apple stores.
Comment

Makes since with all the ipones and ipads out there.

My mother in law even goes there for her iPad.
Comment

"or roughly 3500 visitors per store per day"

this is apple's secret weapon (hidden in plain sight). the competition doesn't come close to apple when it comes to customer service.
Comment

I've experienced all kinds of people working at Apple stores. From extremely nice, accommodating staff to someone who told me "sucks for you" as he denied servicing my MacBook. It's luck of the draw.
Comment

I try to avoid them as much as possible.
Comment
T

The same is true about much of Apple

It's hidden right out there. You appreciate what they're doing, you buy into the environment. As long as other stores, and other computers, are available, okay. It's not a monopoly-style system, like the one Google tries to run. You'd rather go with the other platforms, go. They're still the majority and probably always will be. Yes, they slowly grow the platform.

The stores are a wonder, and it's strange to see the criticism that those Apple Genius commercials were bad. If you go in, they will help you. Honest-to-God. Sometimes they help you in very big ways, like swapping your iPhone out for free. The point is, they really know what the great bulk of customers want. Most people aren't computer scientists, and couldn't care much about RAM and processor and graphics speeds. They want a computer to help them do their tasks, to share things, to read and watch media. They don't program in C, nor are they interested.
Comment
P

Holy thats a lot of people, i think at times a bit too many as waiting is always a pain.
Comment

Watch out, some guy is stealing their camera!
Comment

With this lackluster news it's no wonder they were going to cut back on employees. Nothing worse than to have them standing around. Apple could hardly afford that ....ha...ha...ha...ha...
Comment
B

they just swap out $600 phones all day long, I dont see how its a sustainable business model in the long term

I cant see how the genius bar is profitable, and isnt hemorrhaging money left and right to the loudest talkers and biggest jerks that wander in usually without appointments.
Comment
K

wikus said:
That guy needs to use deodorant.
Click to expand...