Apple today shared a new short video focused on the recently released 11 and 12.9-inch iPad Pro models, listing five reasons why the tablets can be your next computer.


Apple's list of reasons why the iPad Pro can replace a computer are as follows:
This is Apple's first ad for the new iPad Pro models, but it has long advertised the iPad Pro as an alternative to a computer. Apple uses the tagline "like a computer unlike any computer," in this ad, which is something new the company has been trying out.

Apple's 11 and 12.9-inch iPad Pro models were first introduced in late October and shipped out in November. The new iPads feature edge-to-edge displays with Face ID and no Home button, powerful A12X processors with performance on par with many Mac notebooks, USB-C to connect to 4K monitors and USB-C accessories, and thinner bodies.

Article Link: Apple Highlights Five Reasons the iPad Pro Can Be Your Next Computer

Certainly can replace a laptop for many people. All depends on the use case.
Reactions: LinusR, J.J. Sefton, arnabdas and 38 others
Comment

I would love to sell my 2013 MBP and get an iMac, use my 2017 IPP as my mobile device. I think I could do that. But I’m not so sure about having only an IPP. I would have to make a lot of compromises.
Reactions: stealth.pilot, thewhitehart, Menneisyys2 and 1 other person
Comment

If only this claptrap was true. The iPad will never replace a laptop or a desktop
Reactions: jinnyman, jase1125, xalea and 57 others
Comment
N

Does the iPad have support for a robust file system / download manager and the ability to use a mouse when required?

Than it isn't going to replace a computer. Ever.
Reactions: CordovaLark, repoman016, tdream and 141 others
Comment

It can probably replace the computer for 80% of people at this point. We still need a few more features in Files and a few more apps that can really take advantage of the hardware.
Reactions: J.J. Sefton, coachingguy, iModFrenzy and 22 others
Comment

It’s also more expensive than the average PC for those uses.
Reactions: J.J. Sefton, jinnyman, jase1125 and 65 others
Comment

But with software that is less powerful than most computers.

We get it, the hardware is great. But the software is severely lacking.
Reactions: J.J. Sefton, jinnyman, vidjahgamz and 93 others
Comment

Have you ever used a computer?
Reactions: jjhny, Agit21, imageWIS and 15 others
Comment

Please for the love of everything holy. APPLE PLEASE enable external storage via USB-C .

I love my 11, but just having that feature (and maybe Mouse support) would make it a Laptop killer for many more than just myself.
Reactions: Jovijoker, usersince86, scoobs69 and 30 others
Comment

Mac'nCheese said:
Also, how is it a scanner?
Click to expand...

I know why this would never happen, but if an iPad could torrent and download files with an easy way to move/delete them from my local server, it’d replace my computer. Even a $200 Chromebook can do those things.
Reactions: ryanwarsaw, dk001, Jimmy James and 24 others
Comment

Let me know when you can use Xcode on an iPad, or play a AAA gaming title on iPad. Until then, it is not a computer, it is a specialized tool for people who need to draw.
Reactions: jinnyman, LinuXtreme, The Captain and 45 others
Comment

gim said:
It has a camera
Click to expand...

True, I guess that's what they mean but who in the world would buy that line? I guess they are really reaching here.
Reactions: jjhny, jimthing and Marekul
Comment

Mac'nCheese said:
Also, how is it a scanner?
Click to expand... 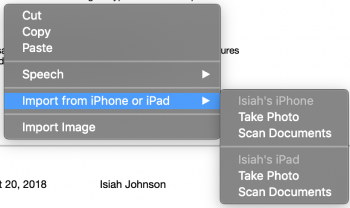 I don't know any computer that breaks when you bend it.......
Reactions: jase1125, stevekr, The Captain and 14 others
Comment
E

You cannot connect external USB Storage devices, so it can’t replace a computer. The
Reactions: scoobs69, u+ive, The Captain and 28 others
Comment

I can see where Apple would make this mistake in reasoning. I mean, the iPad has about as many ports as the computers Apple makes.
Reactions: Ja50n, benthewraith, repoman016 and 58 others
Comment
H

totally disagree also.
it means one is totally locked into the apple system.
no inserting a usb stick into the iPad to transfer files.
like many people, i have hundreds of movies backed up which i like to re-watch from time to time.
no more of that.
just one example …
Reactions: Maxx Power, jjhny, Agit21 and 9 others
Comment

Missed a big one, you have $1000 to spend on a computer that comes with a gimped OS?
Reactions: fairuz, jinnyman, Jimmy James and 32 others
Comment

justperry said:
I don't know any computer that breaks when you bend it.......
Click to expand...

89% sure any computer you try to forcibly bend will break. Take a Hammer and bend your MBP to see for yourself
Reactions: Jovijoker, iModFrenzy, AdonisSMU and 11 others
Comment

Kyle4 said:
I know why this would never happen, but if an iPad could torrent and download files with an easy way to move/delete them from my local server, it’d replace my computer. Even a $200 Chromebook can do those things.
Click to expand...

There are apps (Documents by Readdle) that can connect to SMB shares, FTP/SFTP, and even SharePoint resources. Plus the cloudy stuff [OneDrive/Google Drive/Box/Dropbox). The "iPad" may not directly, but apps can.
Reactions: RobinInOR, cfurlin, zzu and 5 others
Comment
You must log in or register to reply here.
Share:
Facebook Twitter Reddit Email Share Link
Register on MacRumors! This sidebar will go away, and you'll see fewer ads.
Sign Up
Top Bottom