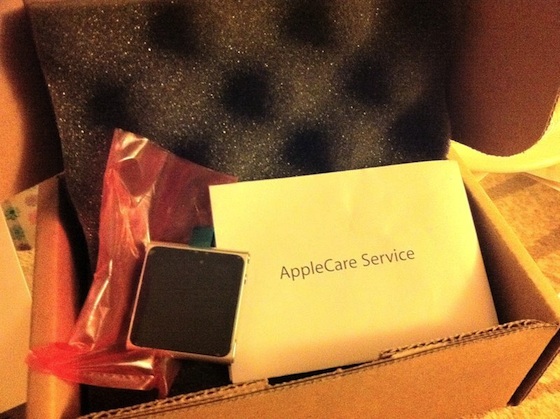 Just hours after we reported that Apple appeared to have begun shipping out current-generation iPod nanos as replacements for recalled first-generation units, users are beginning to report in that they are indeed receiving the current models.

Just received our replacement today - Fedex truck pulled up late in the evening. Inside was our replacement for our 1st gen ipod nano that was sent into Apple 1 month ago.

It's a 6th generation ipod nano, serial number shows that warranty has expired. Not sure if that means that it's a refurbished model or if it's a brand new model and they've deactivated the warranty. It's silver.
Click to expand...

Apple initially launched the iPod nano in 2 GB and 4 GB capacities priced at $199/$249 back in September 2005, adding a $149 1 GB model a few months later. The device utilized a click wheel for navigation and contained a 1.5-inch screen for displaying the standard iPod software interface. Battery life was advertised at 14 hours of music playback and four hours of photo slideshows with music.

The current iPod nano is less than half the size of the original iPod nano and utilizes a 1.5-inch touch screen with software skinned to look like iOS. It is available in 8 GB ($129) and 16 GB ($149) capacities and offers up to 24 hours of music playback.

So what capacity are the replacements in?
N

I think the question here is... when will they start replacing iPhone's 2G for new iPhone's 4S
0

sweet! battery life and quadrupled capacity makes it a perfect companion for an upcoming 22 hour flight ;-)
I

Not too happy. If they are just sending out 6 generation Nano's then why did it take so long?
A

Mine is still pending, hope i get a 1st gen!

I'd prefer an 1st gen replacement. Much more ergonomic and not as easy to lose to a dog/infants teeth/tummy.
Last edited: Dec 20, 2011
K

Time to buy a cheap 1st gen nano off ebay!

[Edit]: Don't know what you guys are talking about though. This sounds like an awesome deal to me. Free upgrade!
Last edited: Dec 20, 2011
P

this is good for those getting replacements, unless you really dont like the newest design. if i was in line to get a replacement and got one of these i would just sell it since its not the type of ipod i would ever want.
M

kwiiboy said:
So what capacity are the replacements in?
Click to expand...

8 GB. Just received mine this morning.

Just goes to show you, early bird gets the.... shaft.
S

Rabble rabble! I didn't get something for free! I'm entitled! Rabble Rabble!

(just trying to head it off at the pass)

I sent on mine of weeks ago and not got one ;(
U

Step 2 of the process is "diagnosis." Does that mean that even if your serial number is in the right range, it may not qualify and they may just send it right back to you?

I was really hoping for the 1st gen back.

"Methinks the lady doth protest too much..."

Man, I wish I had one of those! I'd love to get the watch thing at a much lower price point.

My car has an ICE iPod hookup allowing me to play music through the speakers and keep the 1st gen iPod recharged. My understanding is that newer iPods/iPhones/iPads have different power requirements. For example, my iPad2 won't charge in my car.

Does anyone know if the new iPods work with legacy connectors?
Will I lose car stereo capability with nano upgrade?
N

Undecided said:
Step 2 of the process is "diagnosis." Does that mean that even if your serial number is in the right range, it may not qualify and they may just send it right back to you?
Click to expand...

No, I think this is just the standard steps for all repairs. If you were actually sending an Apple device in for service they would have to analyze/diagnose the problem before they repaired it. In this case, I think they just check that you send the actual iPd you say you have, then send you a new one.
B

It's got to be said, Apple is awesome!!

Picked one up on ebay last night for $50.

Kwill said:
My car has an ICE iPod hookup allowing me to play music through the speakers and keep the 1st gen iPod recharged. My understanding is that newer iPods/iPhones/iPads have different power requirements. For example, my iPad2 won't charge in my car.
Click to expand...

Only the iPad(s) require more juice for charging. All iPods and iPhones should charge just fine with an older iPod car charger. In fact, these new nanos have very low power requirements. My laptop USB port charges my nano 6G is about an hour.

Does anyone know if the new iPods work with legacy connectors?
Will I lose car stereo capability with nano upgrade?
Click to expand...

This one is trickier to answer. I guess the right answer would be "it depends". What make/model is your car's head unit. That would be the first place to start looking.

As far as the ability to connect physically, the nano 6G still uses the same 30-pin iPod connector as the nano 1G. So it'll fit. Will it work is another question.