Apple today introduced a (PRODUCT)RED edition of the iPhone 8 and iPhone 8 Plus, available to order on Apple.com starting Tuesday, April 10, after 5:30 a.m. Pacific Time, and in Apple Stores starting Friday, April 13. 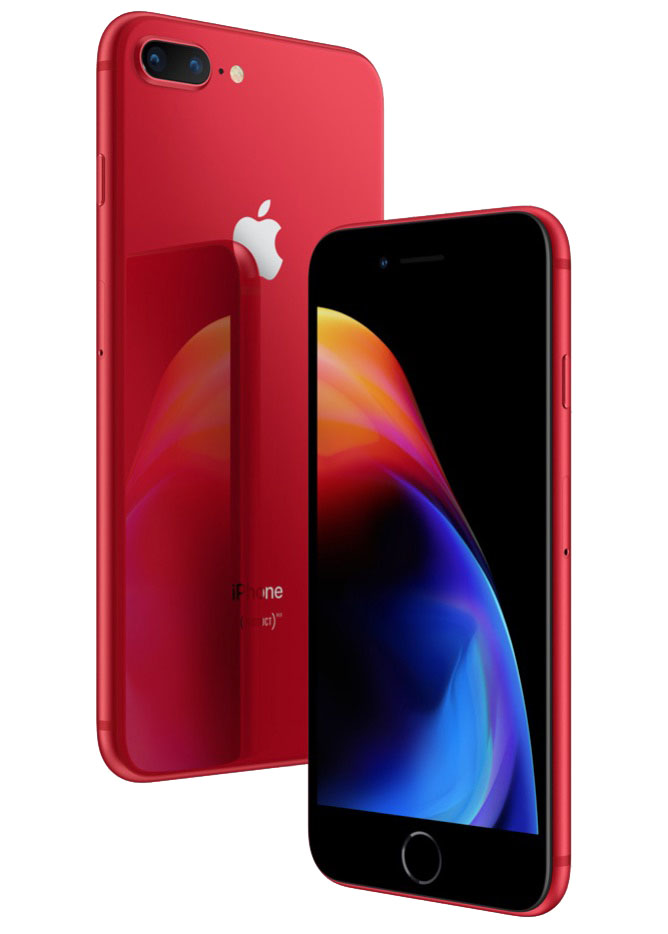 Notably, the red finish is complemented by black front bezels, compared to white bezels on the (RED) edition iPhone 7 and iPhone 7 Plus. Otherwise, these are identical iPhone 8 and iPhone 8 Plus models as unveiled last September, with the new color introduced mid-cycle likely only to bolster sales.

Apple also introduced a new (PRODUCT)RED edition iPhone X Leather Folio, which will be available for $99 beginning Tuesday, April 10 from Apple.com, Apple Stores, and the Apple Store app around the world.

(RED) was founded in 2006 by U2 frontman Bono and activist Bobby Shriver to raise funds for The Global Fund, which helps people affected by HIV or AIDS, tuberculosis, and malaria in eight African countries, including Ghana, Lesotho, Rwanda, South Africa, Swaziland, Tanzania, Kenya, and Zambia.

Today's announcement is further evidence of Apple's leadership in and commitment to the AIDS fight since the beginning of (RED) in 2006. The more than $160 million Apple has donated in the last 11 years today equates to more than 800 million days of lifesaving ARV medication that prevents the transmission of HIV from mothers to their babies. We're honored that Apple has dedicated its resources to our purpose, and can't wait to see customers bring our mission to life through the purchase of iPhone 8 and iPhone 8 Plus (PRODUCT)RED Special Edition.
Click to expand...

Apple has partnered with (RED) for nearly 12 years to sell a variety of red-colored devices and accessories. For each product sold, Apple makes an unspecified contribution to The Global Fund, raising over $160 million to date.

Thanks to Apple customers around the world for helping raise more than $160 million for @RED, fighting the spread of HIV in Africa and bringing us closer to an AIDS-free generation. https://t.co/uUolpv5Kv6 - Tim Cook (@tim_cook) April 9, 2018
Click to expand...

This special edition (PRODUCT)RED iPhone features a stunning red and black color combination and also offers customers the opportunity to make an impact in fighting the spread of HIV and AIDS. iPhone 8 and iPhone 8 Plus improve on everything we love about iPhone, including Retina HD displays that are more beautiful than ever, the most powerful and smartest chip ever in a smartphone with the A11 Bionic and more advanced cameras for unbelievable photos and videos. We are proud to support (RED) with this bold new iPhone and hope customers think it is as special as we do.
Click to expand...

Apple introduced a (PRODUCT)RED edition iPhone 7 and iPhone 7 Plus in March 2017. The special color was discontinued alongside the launch of the iPhone 8, iPhone 8 Plus, and iPhone X in September 2017.

Well, that should make a lot of people on here happy - black bezels!

Personally preferred the white/red combo they used for the iPhone 7, but each to their own.
Reactions: 19callum93, shrishri, ForumChick and 25 others
Comment

Like I said last year: Red and Black looks so much better.

So no new colors for the iPhone X? Guess they don’t care about it as much. And where is AirPower?
Reactions: Sandstorm, shrishri, Cameroncafe10a and 11 others
Comment
N

Yay! We finally got it!!!!!! About time they give us a black/red iPhone!
Reactions: Sandstorm, shrishri, MareLuce and 11 others
Comment
M

I don't understand the appeal of having this as a color, since most everyone uses a case and can just get a red case. I like that it supports [RED] but other than that, what's the appeal?
Reactions: NIKKG, IlluminatedSage, Martyimac and 4 others
Comment

So, when will mine be delivered?
Last edited: Apr 9, 2018
Reactions: dazzlingirl
Comment
A

Looks pretty cool and raises money for a good cause. Maybe if I weren't so content with my X I'd look into getting one
Reactions: Sandstorm, ForumChick, davidmartindale and 4 others
Comment
N

maceric said:
I don't understand the appeal of having this as a color, since most everyone uses a case and can just get a red case. I like that it supports [RED] but other than that, what's the appeal?
Click to expand...

Read the comments from the iPhone 7/7 Plus Product Red announcement. People were pissed about the white/red combo.
Reactions: DEXTERITY and tridley68
Comment

they will sell a lot more of those now with the black front. looks nice
Reactions: Moonjumper
Comment

It looks way better with the black front. Much more seamless integration of the red colour into the design
Reactions: kltmom, Lazy and Moonjumper
Comment

This ALMOST makes me want to leave my X and go with the 8 Plus in Red.
Reactions: JC0913, DMVillain, brinary001 and 22 others
Comment
R

So no AirPower... It intrigues me what is taking them so long to release it... It's been 6 months now!
Reactions: scrapesleon, Internet Enzyme, GeeMillz22 and 4 others
Comment
C

maceric said:
I don't understand the appeal...since most everyone uses a case and can just get a red case.
Click to expand...

But not everyone.
Reactions: machumors90, Internet Enzyme, 24601 and 5 others
Comment

maceric said:
I don't understand the appeal of having this as a color, since most everyone uses a case and can just get a red case. I like that it supports [RED] but other than that, what's the appeal?
Click to expand...

Black front. This. is. the. most. perfect. phone. ever.
Reactions: DMVillain, Jetcat3, redscull and 3 others
Comment

I think these phones look great. I don't understand why Apple would make someone wait 7 months after the new model comes out to get a red version. I feel like a lot of people would be happy to support the cause and buy red models if they were available at the same time as the new release. I know I would.
Reactions: RuralJuror, dazzlingirl, Cameroncafe10a and 16 others
Comment
N

It will look great under my case because of the glass back.
Reactions: tonybarnaby
Comment

Pleasantly surprised that they listened!

The Apple logo should be red. I wonder why they went silver.
Comment

How long was the red i7 available for?

NinjaHERO said:
I think these phones look great. I don't understand why Apple would make someone wait 7 months after the new model comes out to get a red version. I feel like a lot of people would be happy to support the cause and buy red models if they were available at the same time as the new release. I know I would.
Click to expand...

Mid cycle sales. They do this half way through cycles to get a few more sales before a new release. Oddly enough, a new color usually works, especially one that people wanted from the start. Some people are okay waiting a few more months on a color.
Reactions: dazzlingirl, zombiecoops, bwintx and 1 other person
Comment
You must log in or register to reply here.
Share:
Facebook Twitter Reddit Email Share Link
Register on MacRumors! This sidebar will go away, and you'll see fewer ads.
Sign Up
Top Bottom