Apple is rumored to be working on a subscription services bundle called "Apple One," which could see a launch in the near future, according to code found in the Android version of Apple Music by 9to5Google. 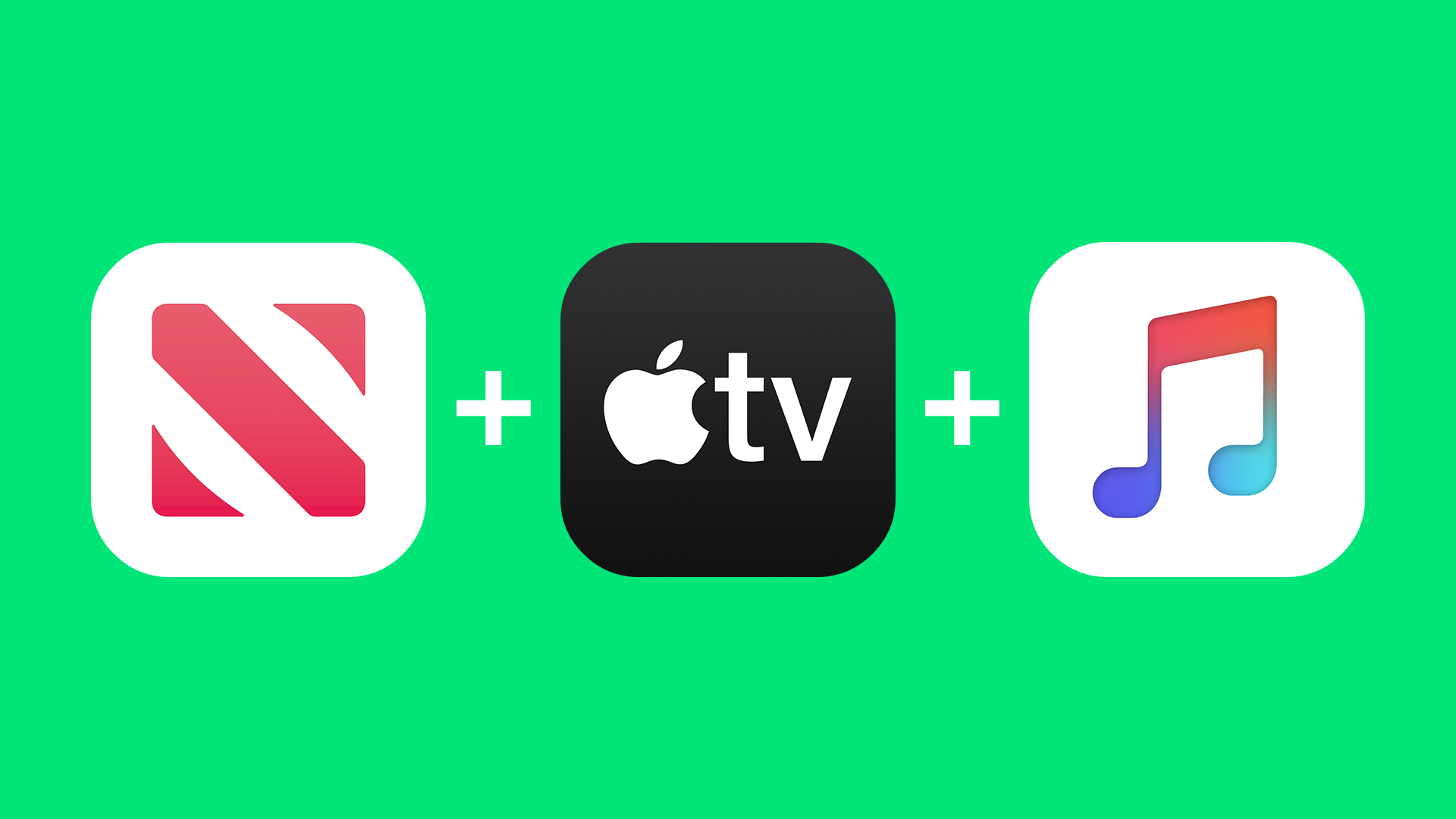 Signs of an "Apple One" bundle were found in the 3.4.0 beta of Apple Music for Android, confirming that Apple Music will be one component of the services bundle. From the Android app code:

Your Apple Music subscription will be included in Apple One starting %s. You will not be charged for both subscriptions.

You can manage your Apple One subscription using your iPhone, iPad, Apple TV or Mac.
Click to expand...

There is wording that indicates customers who upgrade to Apple One will not be double charged for Apple Music, and that the Apple One subscription will be able to be managed on iPhone, iPad, Apple TV, and Mac.

No other information about the Apple One service was located in the Android version of Apple Music, but the original rumor, from Bloomberg, suggested that the bundled service is set to launch in October, likely alongside the iPhone.

Apple is actually planning for several Apple One bundle tiers. A basic package is expected to offer Apple Music and Apple TV+, while a second tier will also include Apple Arcade. A third bundle tier will include all of the aforementioned services along with Apple News+.

There will also be a higher-end tier that includes Apple Music, Apple TV+, Apple Arcade, Apple News+, and iCloud storage, and there may also be a new fitness-oriented service that offers virtual fitness classes.

There is no word on bundle pricing yet, but the bundles are expected to offer savings over purchasing each subscription service separately. Bundle pricing could save customers from $2 to more than $5 a month depending on the bundle.

How much does everyone think the base tier of Apple Music and Apple TV+ will be?
Reactions: DEXTERITY and compwiz1202
G

Cool. Going to assume a bundle price would be lower than all three bought separately. Yes, I know, with Apple you never know, but one can hope. And yes, I currently use all three services.
Reactions: iModFrenzy, Ar40, KeithBN and 1 other person

An iPhone and service subscription would be great. iPhone and Apple Music and AppleCare for one rate.
Reactions: DoctorTech, imlynxy, The Barron and 2 others
M

JM said:
An iPhone and service subscription would be great. iPhone and Apple Music and AppleCare for one rate.
Click to expand...

I have heard a lot of people that want AppleCare to somehow be bundled into it.

However, you can choose to "bundle it" with your monthly payment of your Apple devices using the Apple Card. I highly doubt Apple would "detach" it from the purchase of the device itself.
Reactions: sportsnut and jlozoya
X

This makes perfect sense and I'm interesting in the pricing. This could be worth getting off Spotfiy and have the added benefit of Apple TV+. I'm not super interested in Apple news
Reactions: DoctorTech, DEXTERITY, 28Gauge and 2 others

Doubt the bundling discount will be much. In general Apple are very stingy.

Edit after Apple One announcement: I was wrong on this one. The bundle discounts are decent.
Last edited: Sep 15, 2020
Reactions: jrpow, tomhendrix, canned_tuna_og and 6 others
M

It would be nice to be able to exclude apple news from the bundle.
Reactions: jrpow, DEXTERITY, -DMN- and 19 others

I want it all and I want it now!
Reactions: iGeneo, Ar40, nvmls and 2 others

I used to be an Apple Music fan, but Spotify just kept one-upping them in many ways (discovery, shared playlists, works well outside of Apple ecosystem) where I had to leave Apple Music. I'm not sure why anyone would pay for Apple News+, but perhaps there are enough News junkies out there that find it worth it. And in my household, there is at least one new Apple iPad, iPhone, Apple TV or Mac purchased every 12 months, so Apple TV+ will be consistently free.

I guess what I'm getting at is, unless Apple One is priced at 9.99 or lower, it's really not going to be a value proposition to most. I still wouldn't leave Spotify for Apple Music even if it meant Apple News+ for the same price.
Reactions: DEXTERITY, Shirasaki, KeithBN and 9 others

Not interested in paying for news.... Why would I pay for anxiety and depression when I can get it for free?
Reactions: iModFrenzy, tonyr6, kb923689 and 60 others

And I am sure they will have a student bundle price. Which is nice for people in school.
Reactions: Jxdawg and dannyyankou

frou said:
Doubt the bundling discount will be much. In general Apple are very stingy.
Click to expand...

They just bundled a bunch of video channels and were very generous.
Reactions: JBaby, PickUrPoison, Ar40 and 4 others

Dwalls90 said:
I'm not sure why anyone would pay for Apple News+, but perhaps there are enough News junkies out there that find it worth it.
Click to expand...

I believe it’s often for the massive magazine catalog that comes with it. I’ve heard it covers most any topic one would want a magazine for. To be fair, I’m not a subscriber, so it’s very possible that I’ve created an exaggerated picture here.
Reactions: Hunter5117, PickUrPoison, KeithBN and 2 others

Just do one with Apple Music and iCloud. That would be perfect!
Reactions: DEXTERITY, Waughy, madeirabhoy and 8 others

thejoshuabradshaw said:
I want it all and I want it now!
Click to expand...

Good idea to use that Queen song to market the full bundle.
Reactions: KeithBN, SDJim, thejoshuabradshaw and 1 other person

Name it "Apple One", then give 4-5 different pricing tiers. Derp.
Reactions: iModFrenzy, michaelnugent, AFPBoy and 24 others

What about countries that don't have News+? No 3rd bundle?
Reactions: fab.zed and ondert
E

I already get free Apple Music tho. Can’t wait to see what bundles will be available tho.
N

"You can manage your Apple One subscription using your iPhone, iPad, Apple TV or Mac. "
A 30% cut hurts, doesn't it Apple?
Reactions: kb923689, AndiG, Star Brood and 4 others

Marbles1 said:
It would be nice to be able to exclude apple news from the bundle.
Click to expand...

Nope. Apple has to push a not-very-much-used product somehow ?

Seriously, though, at some point ALL the news sites online will have paywalls and then Apple News might seem like a good idea. I just looked at WSJ and a digital access only is $19.50 a month I can't remember but doesn't Apple News only have "some" of the articles and not ALL?
Reactions: KeithBN
1

seriously. half the comments here. makes it obvious that you couldn't even be bothered to read this VERY short article. i mean, the masthead graphic and the title... did you even make it to the first paragraph? ?
Reactions: Shirasaki, JBaby, Ar40 and 6 others

Unity451 said:
Not interested in paying for news.... Why would I pay for anxiety and depression when I can get it for free?
Click to expand...

You can also get a lot of the Apple News+ articles for free if you Google the headline and go to the site directly. They act like it's premium content when it's not. (Though some of it actually is.)
Last edited: Sep 10, 2020
Reactions: Big Alsie, PSeg90 and AE_stc
You must log in or register to reply here.
Share:
Facebook Twitter Reddit Email Share Link
Register on MacRumors! This sidebar will go away, and you'll see fewer ads.
Sign Up
Top Bottom