At today's "California Streaming" event, Apple introduced refreshed versions of the iPad mini and the low-cost iPad, which was something of a surprise as we were expecting new tablet announcements later in the year. Both the iPad mini 6 and the iPad 9 are available for pre-order starting today, with orders up and live following the conclusion of the event. 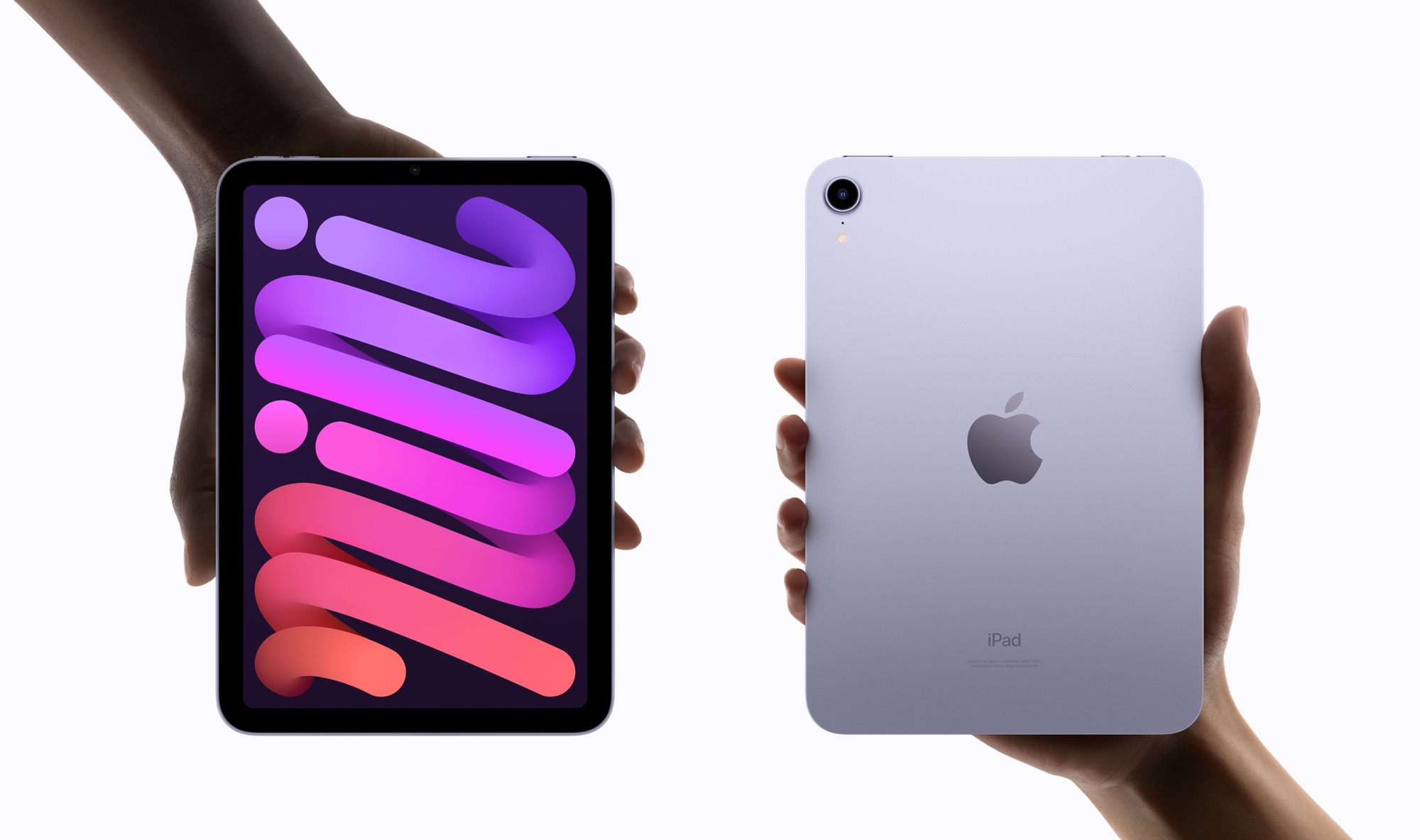 The iPad 9, which replaces the eighth-generation version, continues to be priced at $329. It features an A13 chip, up to 256GB of storage, and a new 12-megapixel Ultra Wide front-facing camera that supports Center Stage for video calls.

Compared to prior versions, it includes sRGB support and a True Tone display, with no improvements to the rear camera. It continues to feature thick bezels and a Touch ID Home button.

The iPad mini 6, priced starting at $499, features a much more significant redesign. The new iPad mini is basically a smaller version of the iPad Air with an 8.3-inch all-display design, slim bezels, and a Touch ID power button.

It too features a 12-megapixel Ultra Wide front-facing camera with Center Stage, and it can be purchased with up to 256GB of storage. It's equipped with Apple's latest and fastest A15 chip, which is also the chip used in the new iPhone 13 models.

The iPad mini comes in unique new colors that include pink, purple, space gray, and starlight, while the iPad 9 is available in space gray and silver.

Both the iPad mini 6 and the iPad 9 models will be delivered to customers starting on September 24, which is also the launch date for the new iPhone models.

The iPad mini was the ONLY thing I thought was a stand out of the event but the LAST thing I need.
Reactions: MrOhYeah, apparatchik, ivantheipodder and 20 others
D

ordered mine already in Starlight. Have no idea what that color is but got it anyway. lol Silver-ish? gold-ish?
Reactions: New York, cryptonator, caoimhe and 6 others

Think|Different said:
The iPad mini was the ONLY thing I thought was a stand out of the event but the LAST thing I need.
Click to expand...

I think the Watch was also nice, but it's for the wife and we'd be coming into that ecosystem as new users.
W

What is the screen resolution of iPad mini 6?
Z

Kind of reminds me of the gold from the iPhone 5 era. Like a champagne gold. That’s what I’m hoping for at least ?
Reactions: decypher44

When can someone check the new iPad in store?

Just ordered mine as well, space gray.
Reactions: jimthing, coachingguy, kp98077 and 2 others

Benjamin Nabulsi said:
When can someone check the new iPad in store?
Click to expand...

Most likely next Friday, although you may want to check-in with your Apple store to confirm.
Reactions: TheYayAreaLiving 🎗

Same, with the orange case. Not sure why but...

What is the screen resolution of iPad mini 6?
Click to expand...

What?… why would anyone buy a mini 5 over a 6. So outdated
Reactions: cryptonator, Hammerd, mel823 and 4 others

Starlight or Purple for me. With this, I'll get the 12.9" Pro later.
Reactions: beach bum and TheYayAreaLiving 🎗

What is the screen resolution of iPad mini 6?
Click to expand...

5th gen is
6th gen is
To be honest the cameras are a lot worse on the mini 5, so while the A12 Bionic is fast enough, the A15 Mini 6 would be way faster mini for a lot of things.
Reactions: ElectronGuru, jimthing, mel823 and 5 others

Love my iPad Mini 5 cellular, bigger screen and same footprint? Suatmm. Never used the cellular or gps so will get the wifi version and sell the 5, difference will be negligible.
Only significant news at this event. My 12mini will last at least until the iPhone 15.
Reactions: D_J

Not happy with the $100 markup. But oh well. Ordered and delivering on the 24th.
Reactions: D_J

Put in an order for the Mini base model with a folio. Giving my Pro to the wife. She’ll enjoy it more than me.
Last edited: Sep 14, 2021
W

mini 5 has more surface area for handling and home button is preferred...

It's cheaper since mini 6 is just announced...
W

Screen resolution of Apple devices are getting further and further from conventional/standard since iPhone X in 2017 and probably also the reason I prefer to stay with iPhone 7 Plus and iPad mini 5 once I can buy one...

With or without bezel but not a mediocre attempt like almost no bezel but with notch or uniform but still noticeable bezel...
Reactions: retta283

The 4th gen is A8 based so its really slow comparably. Its not capable of scrolling long web pages smoothly at a quick speed. Using the 5th gen that was A12 based made a big difference.
Reactions: ElectronGuru and klasma
S

Mini 6 is an awesome upgrade, but sticking with my Mini 5. Have an air 4, and hate the touch ID power button with a passion.
Reactions: cryptonator, kjvmartin and Heelpir8