Apple's online stores in the United States and the United Kingdom have begun accepting PayPal payments, reports Re/code. PayPal was previously available as a payment option in iTunes and the App Store, but it is now also accepted for product purchases made at Apple.com. 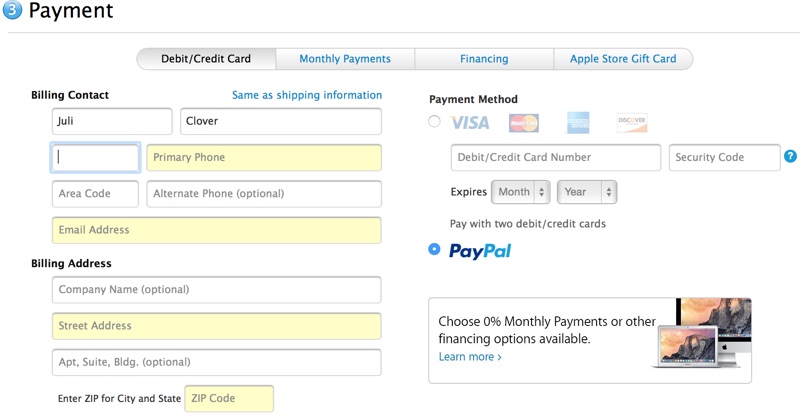 Payments with PayPal can be made as of today from the online Apple Store by choosing the PayPal option when checking out. PayPal is not yet offered as a payment method in the Apple Store app, and it is unclear if it will be added in the future.

Along with accepting PayPal payments, Apple will also promote PayPal Credit payment methods, letting Apple online shoppers pay for items over $250 with monthly payments over the course of 18 months with no interest. 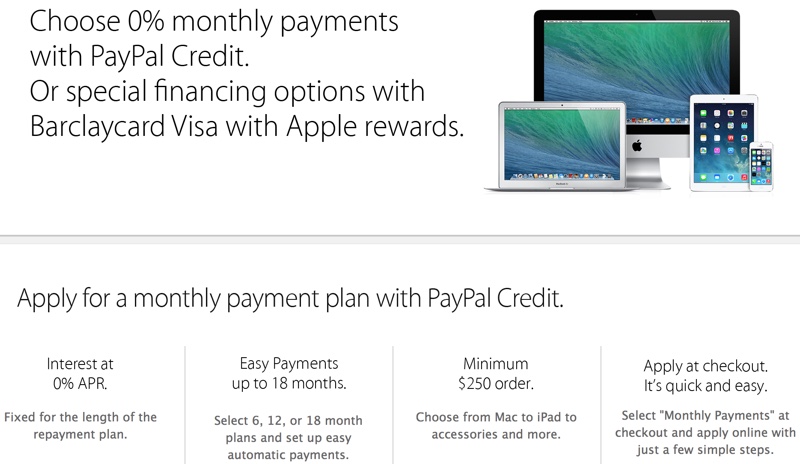 Now that Apple offers a PayPal competitor with Apple Pay, the two companies have had some minor disputes. Back in September, PayPal attacked Apple during the iCloud hacking that saw several celebrity accounts breached. Apple and PayPal were initially in talks to partner up for Apple Pay, but that deal may have soured due to a PayPal/Samsung deal that saw PayPal accepting payments authorized with the Samsung Galaxy S5 fingerprint sensor.

Serious question, does MR ever write their own articles/stories or just post a synopsis of others?
Comment
J

Strange. I thought Apple was in a bitter war with PayPal over Apple Pay and such.
Comment
N

Cool...I'll eBay everything I own and buy that Mac Pro!
Comment

Gutwrench said:
Serious question, does MR ever write their own articles/stories or just post a synopsis of others?
Click to expand...

MR does have original articles. There is the submit a tip button, and MR monitors their forums for news as well. Other than that, I don't know. MR looks to be just posting a synopsis of other news sources. Which isn't always a bad thing, many times it's good to see summaries of all the news bits in one place.
Comment

Why on gods earth did PayPal backout? Probably the stupidest move ever.
Comment
L

Now...if only we could use PayPal as a funding source for ApplePay.
Reactions: Caliber26
Comment

Yes, I read the article, but does this mean a possibility for Paypal integration with

Yehh! Like why aren't they ramping up the promotion of Apple Pay instead?
Or are they required by law to have an alternative payment option?
Comment
J

Amacfa said:
Why on gods earth did PayPal backout? Probably the stupidest move ever.
Click to expand...

Your guess is as good as mine. But I think Apple knows it isn't going to have to try to punish PayPal. It already has.
Comment

Please bring back the downvote option just for this thread.
Comment

It seems pretty simple to me. Both companies see a way to make money. In business, money tends to trump differences that don't bring relevance to the bottom line.
Comment
R

Sweet, now I can finally buy pricer items in the refurb store without killing a credit line.
Comment

Only because PayPal bought BillMeLater, which was one of the available payment options for the longest time at the online Apple Store.
Comment

Ive used paypal over the phone with the apple store twice in the past two years though, so am I missing somewhere here?
Comment

This is a good thing. It's about time.
Comment

paypal aka bill me later aka Paypal credit, its all the same thing and you could always use it as an option to buy apple hardware. apple hid this in the "financing" tab.

all apple did was to take this payment option and move it from "financing" to the other tabs to make it more prominent, and give it more options. but this option was always available to you

the restriction with Paypal and the apple store is that they required you to have all apple hardware shipped to you, you couldn't use this option as far as i know to place orders for in store pickup the purchase required me to have the mac mini shipped


i went to the apple store back in October 28th and i purchased my third mac mini for Paypal credit no interest no payments for 6 months by going to www.apple.com and going to "financing" and clicking on paypal
Last edited: Dec 11, 2014
Comment

Yojimbo007 said:
Where is apple pay option?
Click to expand...

You can't use Apple Pay on websites, only in apps and over NFC.
Comment
C

Seriously. Now the hordes of people who have been holding out on buying Apple products because they don't have a credit card but do have Paypal can finally join in. Tomorrow all the analysts will be upgrading their earnings estimates to reflect the HUGE market opening this reflects.

Wasn't this already an option? I have made purchases with Bill Me Later on apple.com before this already, so this is just a name change because bill me later became paypal credit? What am I missing?
Comment

Die in a fire, PayPal.