Apple today released iOS 8.1.3 to the public, with a range of bug fixes including a fix for an issue that prevented some users from entering their Apple ID passwords for Messages and FaceTime, a bug that caused Spotlight to stop displaying app results, and a problem that prevented multitasking gestures from working on the iPad.

iOS 8.1.3, much like iOS 8.1.2, was a minor release that was not seeded to developers before being released to the public. The software is available immediately as an over-the-air download. 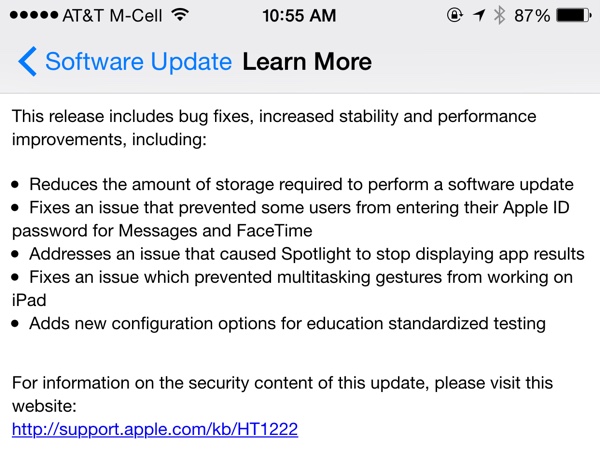 The first hints of iOS 8.1.3 first appeared in early December after devices running the updated operating system began visiting the MacRumors website, and usage picked up last week after iOS 8.1.3 was seeded to Apple retail employees for testing purposes. Apple appears to be expanding its OS X employee testing program to iOS, and iOS 8.1.3 marks the first iOS beta that's been tested by retail workers.

iOS 8.1.3 is a minor update that includes largely under-the-hood bug fixes, but Apple is also working on iOS 8.2, which will bring more drastic changes to the operating system as it contains both the WatchKit SDK and features that will allow the iPhone to integrate with the Apple Watch. It is not clear when Apple plans to release iOS 8.2, but it could come alongside the launch of the Apple Watch, which is currently rumored to be in March.

Update 10:38 AM: iOS 8.1.3 does not fix the recently publicized "GMT bug," which causes calendar syncing issues and time zone confusion for some affected iOS users.

Apple has also released a 7.0.3 software update for the third-generation Apple TV.

The size of required free storage always bugged me. It is typically 2 GB for my iPad Air, even if the update is small. Hopefully the requirements are substantially reduced.

Update: 244MB download on the Air. I have 1.9 GB free and it didn't give me an error but I typically only have about 400 MB free on my iPad. I should have installed something big first to try.
Comment
5

Please fix all the problems related to third party keyboards in iMessage!! Getting tired!
Comment
A

Yay, another update, my wife's been complaining about the bugs on her IP6+, hopefully will help her.
Comment

Does this upgrade come with or without the brick-your-phone feature?
Comment
T

The update appears on my phone in Settings, but not in iTunes on my Mac. Does anyone know why?

Guess I'll be doing it over the air.
Comment

Really want to install but I swear 8.1.1 is working great and battery is awesome and since I cannot go back I am soooooo hesitant.
Comment

136 MB on the 4S... Hope this fixes the WhatsApp notifications disappearing from the lockscreen.
Comment

Well spotted. I checked for it 15 minutes ago as I had the same thought, but seems I was a little to early
Comment

Didn't install it yet but battery life is already worse than before...
Comment
6

Battery life is terrible. Down to 50% after 3 hours use.
Comment

Uh - what? I'm no longer a student, but I'm curious: what is this talking about?
Comment

As usual I'll stay on 8.1.1 and wait for a few days for the update issues to arise before committing to 8.1.3