Last week, news surfaced that popular drugstore Rite Aid was disabling support for NFC and Apple Pay in its retail stores and over the weekend, CVS followed in its footsteps. Apple has now commented on the situation, telling Business Insider that it's working to get as many merchants on board with Apple Pay as it can.

The feedback we are getting from customers and retailers about Apple Pay is overwhelmingly positive and enthusiastic. We are working to get as many merchants as possible to support this convenient, secure and private payment option for consumers. Many retailers have already seen the benefits and are delighting their customers at over 220,000 locations.
Click to expand...

Both CVS and Rite Aid are members of Merchant Customer Exchange or MCX, a team of retailers that are designing their own payments system to compete with Apple Pay. 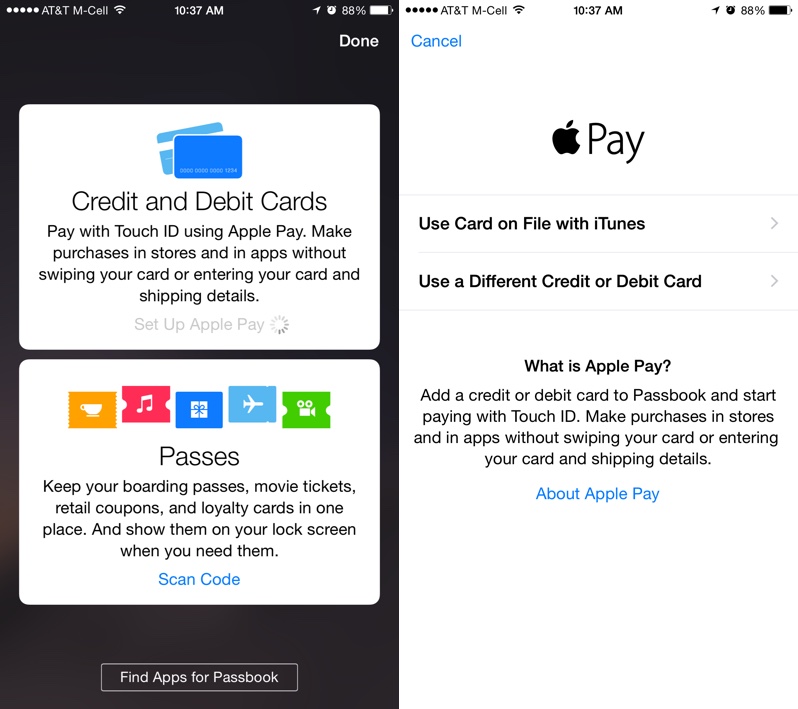 MCX's payment solution, CurrentC, is currently in testing in Minnesota and takes a decidedly different approach to mobile payments. CurrentC does not use NFC, instead basing payments around the scanning of QR codes with a smartphone camera. CurrentC is highly beneficial to merchants, but appears to be of questionable value to customers given that it requires both a social security number and a driver's license number, along with access to a bank account.

Despite only being available in Minnesota at the time being, MCX's CurrentC app has received hundreds of negative reviews from Apple Pay supporters. Android and iOS users on reddit have also teamed up to call for a boycott on all MCX partners, as disabling NFC support to prevent Apple Pay purchases also disables Android-based payment solutions like Google Wallet.

Though quite a few big name retailers have opted out of Apple Pay, Apple has signed on with several major partners including Macy's, Chevron, Disney, McDonald's, Nike, Petco, Whole Foods, and more. Apple Pay is accepted at the retail stores of any of its partners, and at any store that accepts NFC payments.

Update 6:55 PM PT: Walmart, one of the major retailers behind MCX, has given Business Insider a statement on why it has opted not to accept Apple Pay, stating that it believes merchants are in the "best position" to create a mobile payment service for consumers.

There are certainly a lot of compelling technologies being developed, which is great for the mobile-commerce industry as a whole. Ultimately, what matters is that consumers have a payment option that is widely accepted, secure and developed with their best interests in mind. MCX member merchants already collectively serve a majority of Americans every day. MCX's members believe merchants are in the best position to provide a mobile solution because of their deep insights into their customers' shopping and buying experiences.
Click to expand...

What can they say, honestly. Just promote the positives and ignore the negatives.

QR codes. Talk about skating to where the puck is instead of where it will be.

Or maybe it's where the puck was several periods ago....

It's only a matter of time. They can't decline money for too long.
N

Its almost comical how bad this other system is. It has become totally obvious with the target and home depot hacks that these companies are not able to keep my data safe. The last thing I want is for them to have more data including driver licence and social security number. This is going to be a prime target for hackers
M

CurrentC looks stupid as far as user-experience goes. Doesn't Apple have a policy of not allowing apps that compete against their products? Apple should just straight up disallow that CurrentC app from their App store.

It's incredible how bad some companies are at design.. how could any adult come up with something as horrible as CurrentC? Are these companies run by trained monkeys?

As I mentioned in another thread, I tried Apple Pay at Rite Aid today and it worked without a problem. Guess they didn't get the memo.

Is Rite Aid really that popular? They closed all of them around here years ago...
J

In the Article they never mentioned CVS/Rite Aid at all. It could have just been a generic statement.
N

willmtaylor said:
QR codes. Talk about skating to where the puck is instead of where it will be.

Or maybe it's where the puck was several periods ago....
Click to expand...

willmtaylor said:
QR codes. Talk about skating to where the puck is instead of where it will be.

Or maybe it's where the puck was several periods ago....
Click to expand...

i think it's more like they are aiming for where the puck was and everyone's moved on to a different game.

Most of the MCX members will accept Apple Pay as early as they can. Possibly earlier if they can figure out a way to break the agreement.
E

I'd like to think that most iPhone owners wouldn't be seen dead at Walmart, but the weird thing about poverty is that you'll find those who can barely feed their kids who still find a way to have a new phone.

Also: CVS - no Apple Pay and no cigarettes. Walgreens it is, then!
N

greytmom said:
Is Rite Aid really that popular? They closed all of them around here years ago...
Click to expand...

I literally have not heard of them until now.

There's CVS and Walgreens here and Costco also has a pharmacy which is where I go.
F

I actually laughed out loud when I got to the bit about giving them your SS number.

I still don't get the difference between high profile "partners" who have "signed up to Apple Pay", and any old retailer who accepts NFC payments. Surely there's no difference; is it just Apple marketing spin?
C

Any rival payment systems should roll out when they are ready and compete for our business. Having a capability in place and turning it off is anti-consumer choice and just plain stupid.

Vote with your wallet.

How is that a response to the CVS "controversy"?

freeskier93 said:
I actually laughed out loud when I got to the bit about giving them your SS number.
Click to expand...

The implementation by MCX is beyond embarrassing. Also heavily fragmented.
A

mozumder said:
CurrentC looks stupid as far as user-experience goes. Doesn't Apple have a policy of not allowing apps that compete against their products? Apple should just straight up disallow that CurrentC app from their App store.
Click to expand...

That would be a truly comical outcome.
R

Giving your driver's license number, social security number, and checking account number to merchants who have repeatedly had their mobile payments systems hacked with customer information stolen...brilliant. They'll have to hire police to stop the stampede of people trying to sign up for CurrentC.
J

j4m13 said:
In the Article they never mentioned CVS/Rite Aid at all. It could have just been a generic statement.
Click to expand...