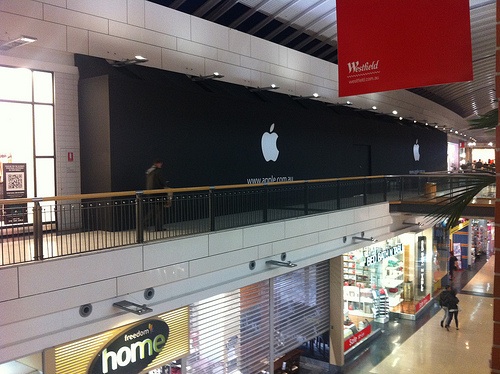 Apple Store in Penrith, Australia (Source: Flickr)</i>​
In association with the opening of Apple's new Penrith store outside of Sydney, Australia this weekend, Current.com.au reports (via The Next Web) that Apple press representatives have apparently noted that the company is planning to open a remarkable 33 stores over the next two months. With the retail push, Apple will move from its current total of 330 locations to 363 stores by the end of fiscal 2011 in late September, a pace that works out to nearly one opening every two days. According to the Apple spokesperson:

"Our retail offering continues to [grow], with Penrith the 11th store in Australia, since we opened Apple Store Sydney just three years ago. Globally we are planning to have 363 stores in fiscal 2011."
Click to expand...

The report also notes that Apple's retail stores have now seen over one billion visitors pass through their doors.

"Apple Retail has been in business for 10 years. During this period, we have had over 1 billion visitors through our doors, many of whom are new to the Mac, as the Apple Store is the best place to learn about all the latest products from Apple," said the spokesperson.
Click to expand...

We need more Apple stores in Atlanta. Every time I go to one of them, it's completely full.

I wonder if Microsoft will be able to keep up.

How's J.C.Penney working out for you, Ron Johnson?
B

They need a store in Sandusky, OH! It's really busy in the summer and stuff with Cedar Point. We have a Apple Store in Crocker Park, 1 hour away from everyone.

Been waiting for one in Edinburgh for years...

Rumours say they have secured a place now, and will start development soon.

Put more stores in MD. The one in Westfield Montgomery always smells funny for some reason. Towson is too damn far for me.
A

Would love to have another one somewhere along the Gulf Coast. Best Buy is the only place to get an Apple computer around here, and the "Apple Care Provider" here is crap. Closest one is in New Orleans, and even that one is on the small side.
D

and how many did ms want to open next year

This is good news.

We need a few more in the DFW metro. 6 is not enough!

One in Leeds, UK, please! I hate having to go to flipping Meadowhall

An Apple shop would look great in the Victoria Quater, they should buy that unit where Reiss is!

About 3 opening this summer in Toronto area including Waterloo so things are improving for us Canadians!
J

Just please don't put up a sign announcing how many visitors:

I guess I'm living in the right place

They must be doing something right!

Penrith! Apple must be lowering their standards - expanding like Starbucks. I thought Apple only opened retail stores in high socioeconomic status areas/shopping centres. Penrith is a hole.
E

I would just like one closer than 4 hours away.
Chicago -4 hours
Minneapolis - 7 hours.
S

eulea said:
I would just like one closer than 4 hours away.
Chicago -4 hours
Minneapolis - 7 hours.
Click to expand...

We need one in downstate Illinois. Driving to Indy or Chicago is just too far.
C

Kilamite said:
Been waiting for one in Edinburgh for years...

Rumours say they have secured a place now, and will start development soon.
Click to expand...

I have heard rumors that it could be on Princes Street, either east end opposite Waverley Station, or the west end ( i think the empty shop between orange and hmv??)

pawelthegreat said:
About 3 opening this summer in Toronto area including Waterloo so things are improving for us Canadians!
Click to expand...

I know they're opening one in Waterloo and one in Burlington (not really "Toronto" area lol), but where's the 3rd?

how about one in central Melbourne city?
T

Kilamite said:
Been waiting for one in Edinburgh for years...

Rumours say they have secured a place now, and will start development soon.
Click to expand...

Supposedly the ex-Boots/Waterstones/Burger King set of shops opposite the Balmoral/North British. Quite why they would choose the grotty end of Princes Street rather than the available spaces with a direct Castle view is beyond me.